I'm grasping for a deeper understanding of the Swiss Re building, using Revit as an investigative tool. Construction photos from the net reveal a tubular steel framework beneath the cladding ... a series of A frame modules bolted together to form a triangular lattice.

I had a couple of tries at making this component.  First attempt was a 3-pick adaptive component.  Couldn't control the verticality of the central node.  Second time around I made the node using a conventional Generic Model template and embedded this in an adapative component, but no adaptive points. 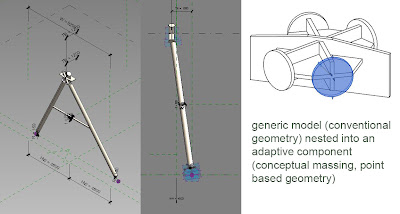 I just used the adpative template to access the conceptual massing tools.  I wanted a hybrid family: reference-plane geometry for the  central node, point-based freedom for the splayed legs.  The result is far from perfect, but it's good enough to take me forward as I journey into the heart and soul of the gherkin.

It would be possible to use hand-sketches and CAD diagrams for this kind of investigation, but there's nothing like a BIM model for  illuminating complex geometrical relationships.  Each tier of A frames has a slightly different tilt angle and base width.  Each floor slab is rotated 5 degrees and slightly larger than the last.  Even floor levels line up with the nodes, odd floor levels meet the A frames half way up the legs. 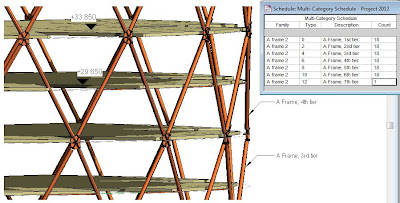 First thing I noticed was that the legs need more tilt than I expected.  You need about 400mm of tilt just to form a cylinder.  To understand this better I built a component that would stack up to form a cylinder.  Oddly enough this looks like a huge pineapple ring.  I seem to be trapped inside a world of fruit & vegetable metaphors.

This quickly confirmed that the upright triangles do indeed lean outwards.  However balance is maintained because the inverse triangles lean inwards by a similar amount.  And so the alternating triangles take you around the ring in facets.

The component itself is another old-fashioned generic model, this time based on a blend.  18 sided polygons top and bottom, with a 10 degree rotation.  Had to to a bit of vertex editing to split the resulting parallelograms into triangles.  I added a circular void to represent the core.

To transform the cylinder into a gherkin (or a pineapple) we need parametric control over the size of the two polygons.  What's happening here is that I'm using a different method to arrive at the same shape that I created before using pattern based curtain panels.  Except that this time the panels are flat triangles (as opposed to curved rhomboids)

So we need to add two parameters to the pineapple ring family. I tried dimensioning from the origin (intersection of two reference planes), but when you flex this the results are unpredictable.  I could have swiched to point-based geometry again by using an adaptive component, but instead I created an array of reference lines at the origin and dimensioned from these to the perimeter of each polygon.  This simple trick prevents the angles from slipping out of alignment.

At this point it seemed useful to draw a plan diagram to summarise my understanding of gherkin geometry.  The circle is divided into 18 segments of 20 degrees each. Each pineapple ring represents 2 storeys and is rotated by 10 degrees so that triangles line up in pairs to form rhomboids.  So the floors rotate by 5 degrees causing the 6 triangular voids to spiral.  The six portions of useable office space are centred on the gap between pairs of successive openings in the floor slab, hence the 2.5 degree rotation. 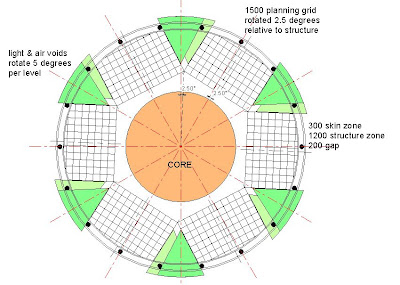 Now the justification for this elaborate form is that you achieve clear floor space with a relatively lighweight structure.  It's a bit like those lightweight paper bins made from steel mesh, or think open weave fruit baskets, or maybe lobster traps.  The combination of curvature and triangulation makes for a very elegant self-bracing structure, more elegant I think than the Hearst Tower in New York, also by Foster.  And while we are making comparisons, I'm also reminded of a little glass pavilion by Bruno Taut.

But however clever the external shell, the column-free office space relies on conventional beams spanning from core to perimeter.  At maximum diameter the spans are around 15 metres, which is quite a stretch.  These beams are like spokes of a wheel, 36 spokes = 10 degree spacing.  The 5 degree rotatin of floor levels results in 2 basic conditions. At odd floor levels spokes hit on node points, so you also need a beam between nodes to carry every second spoke.  But at even floor levels each spoke coincides with the mid-point of a tubular leg.  One obvious point here is that this is not a pure structural form.  Space frames gain elegance and efficiency by treating nodes as hinges so that all the struts are in pure tension or compression.  But here we have loads at mid-span on both horizontal and diagonal members: a hybrid structural form.

The Floor Plate is another simple Generic Model family with a radius parameter that varies from floor to floor.  Once I added the beams to this and placed a camera looking up into the structure I had a view that seemed worth rendering.  What took me by surprise though was how much easier it is to read the rendered view, to grasp the spatial relationships.  Clearly there are subtle depth cues that the shaded view lacks and that our brains use to interpret the scene at a subconscious level.  Previousl I had thought of real-time rendering as a fancy marketing tool, but now I am thinking that it can really help us during design development.

I think that's enough for one post.  Lots more to learn though so I will return to the gherkin model another time.  One final render to conclude this episode. 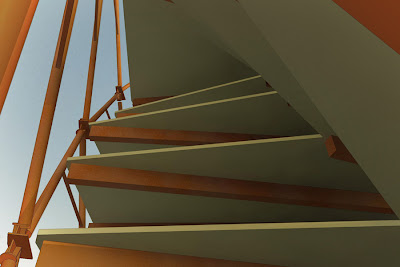 Email ThisBlogThis!Share to TwitterShare to FacebookShare to Pinterest
Labels: Gherkin, Way We Build