I didn't really get any for my birthday (toys), but I have been playing with a couple of add ins, and of course the new features of Revit2018 have been announced. (no comment) 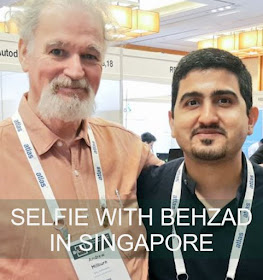 During BiLT Asia, I met lots of interesting people, including founding members of Enscape3d and Flux.io. I've had my eye on both of these initiatives for some time now, but talking to people intimately involved with the development of a project always helps to push it towards the top of the priority stack.

Thomas Schander from Enscape 3D was kind enough to offer me a six month license to use with Project Soane, having loaded up the model on the system at their booth with quite impressive results.  I haven't got very far yet, indeed I haven't even got around to registering my license, but I think it's going to be very, very useful. 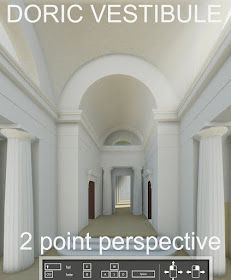 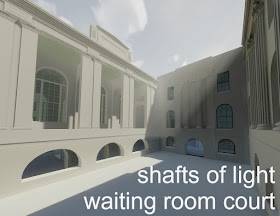 Next up is a view looking back at that open-sided loggia from at the South-West corner of Waiting Room Court. The virtual dust particles are still hanging thick in the air, so although you can see straight through the accountants office to Printing Court beyond, the effect is not very striking.  When we first tried the model out on the Enscape Stand we got a view from the Governor's Office window with the Printing Court positively glowing in the distance.  So far I have failed in my attempts to recreate this effect, but it's early days. 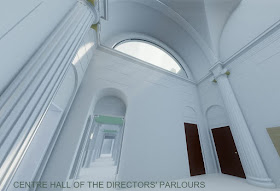 By accident, I slipped through the wall to the right, through some waiting rooms and into the Central Lobby of the Directors Parlours, an area that I worked on quite intensively towards the end of 2016 and beginning of 2017. This wide-angle shot gives quite a nice impression of the space with low, narrow corridor coming in from the Entrance Lobby, the high level lighting and central groin vault.

I also exported a panorama from this space. I downloaded a freeware viewer called Panorado which works fine, but I couldn't figure out how to embed it in a blog post.  Maybe there's a way to upload these to a gallery. 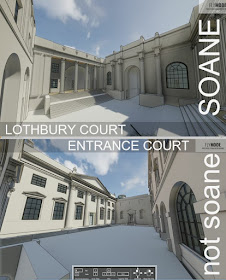 OK, I knew this really ... lots of links to 360Cities in Google Earth and it's easy enough to set up an account.  So here are some links:

And then of course I went back to Enscape and realised it's got a built in Gallery function, which is much easier.  But it expires with the license, so 360Cities is also useful to have.  Here's a link to Enscape, it won't last long though because it was created with a 14 day trial.

And then a couple of days later I realised that Google Photos has a built-in conversion feature, I had uploaded one of the panoramas to Google Drive, hoping to see it as a panorama.  Doesn't quite work like that, you have to go to the Assistant which then redirects you to a web link.  But you do get a message at some point telling you that your panoramas have been processed.

It's early days yet, but Enscape is definitely giving me a much deeper understanding of the quality of space and light in Soane's masterwork.  That's quite surprising, given how well I thought I new the model.  I guess virtual reality trumps an architects normal ability to visualise what it's going to be like in a space.  And for sure it will help in setting priorities as we raise the level of detail across the model. 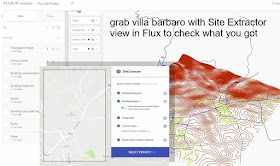 So what about Flux?  Well all I've done so far is play around with the Site Extractor. Getting data directly into Revit doesn't work, you need to go via Dynamo, or in my case I used AutoCAD (oh no!)  I started with Whitehall (current Project Soane work) then tried a couple more flattish places (Robie House, Lever House) before realising I needed a hill.  Le Corbusier's chapel at Ronchamp is on a hill, so I grabbed that, then I thought about the work I did on Palladio's Villas back in 2014.

How time flies.  Did a couple of posts about this just over a year ago.


So I grabbed the site for Villa Barbaro which is built on rising ground leading up towards the foothills of the alps.  By then I had set up a starter file with appropriate layer presets for the data keys that Site Extractor grabs for you from open source maps. I've dispensed with using the topography surface because I couldn't get that to generate a topo surface in Revit.  Contour lines work fine, so no need anyway. 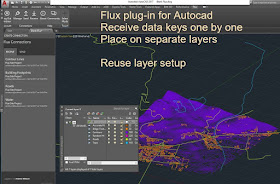 I created a CAD links file where I can generate topo surfaces in the right place without contaminating the main file with CAD nonsense.  Copy from there and Paste Aligned to Same Place. 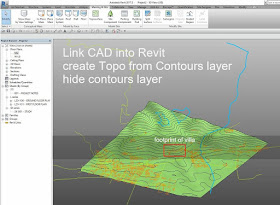 I had to copy over some sub regions before deleting the original topo surface (that I built rather laboriously, estimating heights from Google Earth.)  It was way out of course, but that's all part of the extended learning curve (approaching 3 years now, since I started exploring Palladio's bag of urban design tricks.) 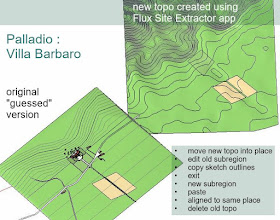 The tree families had been set up to host themselves on surfaces, so they auto adjust, but the buildings and floors needed manual tweaking. I opened this post with a shot of Behzad Meskini who has been doing lots of really interesting things with Revit (and Inventor).  I attended his session at BiLT Asia and among other things, gained renewed enthusiasm for the "Modify Sub Elements" tool for floors. 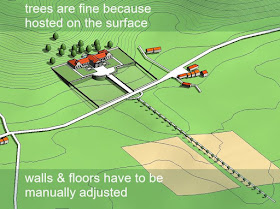 Nothing very new here, but I had overlooked the ability to grab horizontal lines and stretch them up and down.  This makes sloping roads (ramps) a lot easier to handle.  No variable layers checked in the floor type so the whole floor slopes (rather than getting thicker) 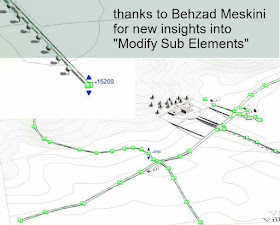 One thing that had put me off the Sub Element tool was all those diagonal lines that show up when surfaces get slightly twisted.  It's nice when you want it, but in this case I don't.  Easy enough to turn them off (and you can set up a View Template of course.)  So that was Villa Barbaro moved forward significantly with a couple of hours work. 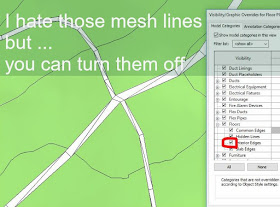 This villa has a natural spring at the back which has been built in to a terrace up at the main floor level.  Ground floor facing the road is next level down.  It all makes sense now.  One day I will model this villa properly, including the stairs that rise up from the side wings up to the main level.  Already looking good though. 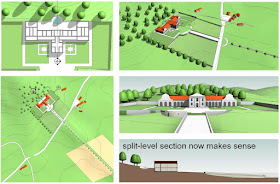 The whole study model is pretty crazy, over 100km across, but it's also very lightweight and agile.  Largely because all the villas are created as families.  Originally I had started doing the studies side by side in a rectangular space, but I was getting confused about where they all were on the map. So I moved them around so they were in roughly the right relative direction.  Pretty soon the ones close to Vicenza started moving to the correct distance apart so they didn't overlap.  Then it was a short step to putting them all in roughly the right place. 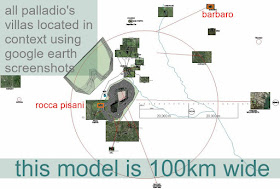 So I decided to do one more.

Villa Rocca Pisani isn't actually by Palladio, but Vincenzo Scamozzi inherited Palladio's mantle and completed / extended several of his projects.  Also, it's dome is a probable source for England's best known "Palladian Villa": Chiswick House.  William Kent was involved in this project, one of the generation of English architects that preceded Soane and a notable contributor to the Whitehall area I have been looking at recently, along with my Project Soane collaborators. 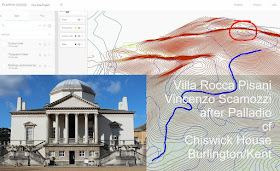 I thought I had taken reasonably accurate heights from Google Earth, but it turns out my previous work was way out.  The hill rises at least twice as high above the adjacent plane (town of Lonigo)

In this case, I have a rather big topo surface representing the remnants of a ridge extending from the alps, down past Vicenza.  So I cut out a square hole in order to merge in the new topo.  We are not working to millimetre accuracy here.  Discrepancies of 10m are not going to be a big problem over of more than a kilometre. 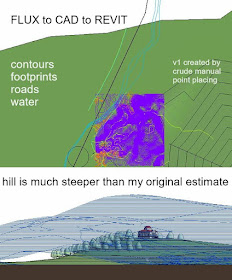 The data coming is clearly approximate anyway, but it's much better than what I had before, and really helps in terms of what we are doing here.  It's a hands-on research project, aiming to uncover fresh insights into Palladio's work in context.

Click on the surface with the sub regions first when merging, or they will disappear. That's important!  But in this case I had to copy-paste the roads from old to new (in sketch mode)  Also there were points in my old surface, close to the edge of the rectangle, that resulted in crazy distortions.  Just delete these for a smoother effect. 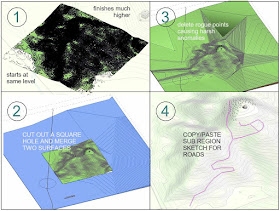 I wanted to test adding a second set of data from an adjacent rectangle.  The villa is on a local high spot on ground that continues to rise from the plain, up into the mountains beyond. It worked fine, but aligning the two areas in 3d space is a manual task, which I did in Autocad. 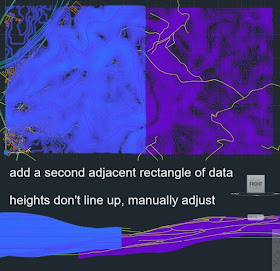 Site Extractor just brings the data in relative to zero in Autocad each time.  No real-world position recorded.  That's fine.  Also the two sets of data don't match perfectly.  This stuff is fine for concept studies, don't expect it to work like survey data. 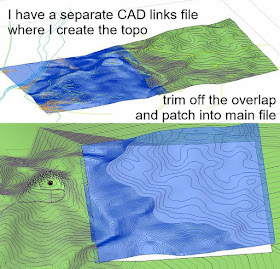 I included an overlap zone so as to make alignment easier to judge, so I had to trim this off before merging.  This is where clicking first on the topo with the sub regions comes into play.

Even after trimming tight along the edge there was quite a bit of turbulence. 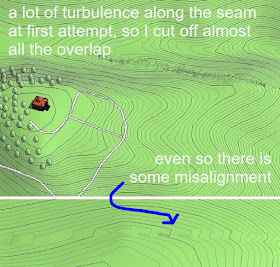 All I did here was to delete points in a zone all along the edge strip, which disguises the discrepancy, smooths out the contours. 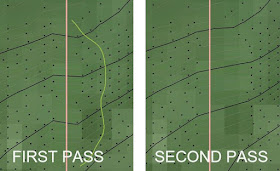 Rising ground with a local high spot overlooking the town below in the river valley. 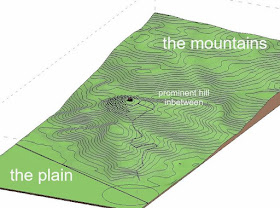 I was tempted to carry on adding more topo and working up the sheet, fleshing out the context, adjacent agricultural fields etc.  But this is not the time to return to my Palladio studies, I have to get back to Project Soane.  Flux site extractor works.  I've got my head around it, I know what to do next time I need to grab some topo, roads, rivers, approximate building footprints.

All good, and thanks to Javier and Karl for taking the time to talk to me in Singapore. 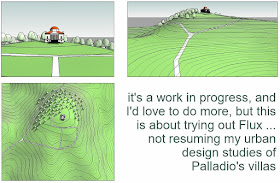