I recently received a message from Robin Deurloo, who lives in the Netherlands and is one of those who made an effort to contribute to the modelling stage of Project Soane. He had received a request to model a fireplace design which is in a vaguely classical style and was struggling a bit with one element.  He thought of me, and reached out. 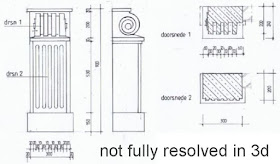 I guess lots of people who find themselves "modelling" on the basis of someone else's "design" face these kind of issues.  The sketches he was working from are somewhat tentative/ambiguous.  That's in the nature of quick design sketches really.  In this case there are inherent contradictions between the different orthographic views, and quite frankly, it suggests a fairly shallow understanding of classical principles... But the general intentions are clear enough, and both Robin and his client have made genuine requests for help, so I decided to have a go. 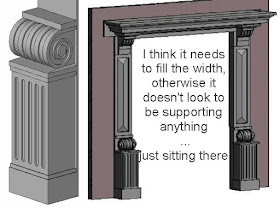 The problem area is the scroll.  My own feeling is that you would never use a scroll quite like this. It seems somehow incomplete and disconnected from the rest of the design. Scrolls tend to follow and "S" shape with one side larger than the other, and assume the function of brackets (at least symbolically)  Also the Scroll as drawn is something of an Escheresque impossible object. The projecting portion and its background merge into each other as you follow the curve around. 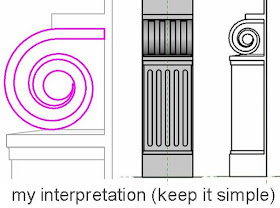 So my own free interpretation of the intentions are shown above.  I'm ashamed to admit that I had never drawn a spiral by the "proper method" before.  I've always fudged it in my impatience.  Considering that I wrote the foreword to Paul Aubin's excellent book "Renaissance Revit" some 3 years ago, this is quite an admission.  So I reached over for Paul's book and constructed a rig of centre points that gradually work their way around, moving inwards as they go.  The scroll as shown in the sketch didn't have so many turns, so I adapted the results with a larger centre circle. 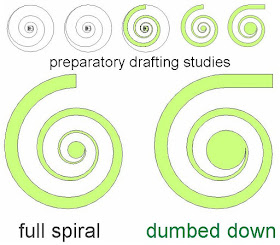 That gave me a filled region which I can edit, and copy the sketch into another context.  You can use the sketch from a filled region to make an extrusion by copying from sketch mode and pasting into sketch mode. And you can select all the lines in a sketch and scale them up and down to your hearts content as long as none of the segments become too short. 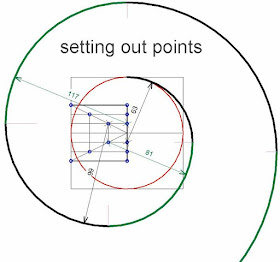 Now it is fairly common for spirals to project further out as they wind in towards the centre, and the sketch provided implies this.  I have ignored this for the moment.  You would need to create a swept blend, probably using a spline that approximates the curve of the spiral.  I'm not quite convinced that the relative widths of the various components has been properly thought through in this design, so I decided to keep things simple, at least until the proportions have been resolved. 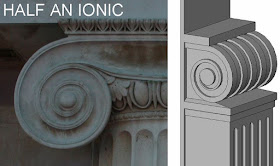 For the same reasons, the fluting on the extrusion below the scroll is not curved in cross-section.  The whole composition is rather squared off and crude, but that's OK.  I am simply presenting an analysis for discussion.  This is as close as I can get to the design sketch while maintaining a coherent 3-dimensional language.  From here you could go on to discuss further adaptations and embellishments.  Personally I would be inclined to either accept this solution, or rethink the whole thing rather radically, but that's just me. 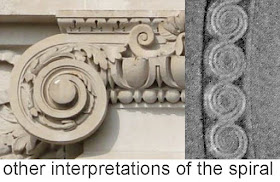 You can download my little family HERE, and if you look carefully, you'll see an embedded Detail Item that illustrates the setting out of the spiral.  This is not 100% as Paul's meticulously explained method.  I lost patience when it came to the inner spiral and reverse-engineered an approximation, but it's close, and you can scale this to a variety of applications with reasonable success.
I have interpreted this scroll as half an Ionic Capital (rather than an incomplete and upside down bracket) but there many other ways of using scrolls.  The classical language of architecture is remarkably flexible. 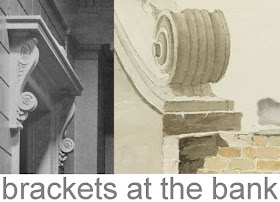 Personally I am a little squeamish about designing modern buildings in a classical style: it rarely comes off in my view.  But I get a huge amount of pleasure from researching buildings of the past using Revit, and if nothing else, this exercise has proved to me once more how remarkable Paul Aubin's book is, as a hands-on learning experience.  If you have it, give it another shot.  You probably found it hard work first time around, but it really repays the effort of repeated study.  If you missed it first time around, then go and grab a copy.  Fantastic value