This all started while I was looking at materials that Jason Grant posted, from a session he gave at Autodesk University with David Light.  It was called Graphics that Pop and you should take a good look because there's some nice stuff in there.   LINK TO GRAPHICS THAT POP

But I went off at a complete tangent while looking at Jason's file.  There was a massing model in there of a few city blocks which included a church.  To be honest I still struggle a bit trying to make shapes like this in the conceptual massing environment.  I want to go back to old fashioned pink lines.  Obviously Jason got over this long ago, so I felt challenged to try harder.

I did quite well at first. Made a little porch and learnt some new tricks.  Found "edit profile" which is very nice, but couldn't resist adding some curves and next thing you know I was thinking about a different church, about my age, sitting on top of a hill in France.
So I spend the weekend modelling Ronchamp and in the process getting sidetracked again, enhancing images with Photoshop.  I will go into more depth on Le Corbusier's chapel in another post. Today the focus is on image processing.

It used to bother me that my most popular page is the one about combining images.  After all this is a Revit blog.  But then I realised that these are Revit users, people who maybe haven't plunged deep into photoshop, but seriously need to enhance their output from Revit.

My normal rule is "15 minutes of pain".  Pain means making an image that doesn't automatically update when you change the model. If it takes less than 15 minutes to do this, you can balance the pain against the gain.  Even if you have to do it 2 or 3 times with 5 or 6 images.  Sometimes though it is worth breaking the rule.  Maybe for one killer image, or perhaps you just want to explore the software and improve your skills; learn new tricks you can use again and again on the 15 minute production line.

Modelling the roof was quite a challenge. I had a sheet where I was placing jpegs side by side with Revit views.  This really helps you to judge scale and proportion.  But that roof is quite tricky.

So half way through I decided to treat myself to a bit of rendering and photo-editing.  I had two images which I put together in the normal way on separate layers with a mask to make the shaded view transparent in the middle and gradually becoming dominant towards the edges.
You just need a big soft brush with low transparency.  Gradually make the brush smaller (press the square bracket keys) and keep dabbing the brush on so the mask gets darker in the middle.  You could use a gradient fill, but the brush gives me more control.  Each image is a bit different and I might want to add some darker spots at points of interest so that the render shows through.

Next I decided to add in the missing roof overhang.  I created a selection around the area, using the lassoo tool, then applied a gradient fill (from black to white).  Looks very crude, but we can fix that.  I had placed the gradient on its own layer, so it's easy to make this slightly transparent and adjust the colour balance.

The whole roof is too light, so I made another lasso selection set.  This time I saved the selection (as a channel) so I can get it back later.  Used levels and colour balance adjustments on both the layers.

Now I had an image from the web that I used to set up this perspective in the first place.  I was using it to check the proportions as I was modelling.  My roof is far from perfect but it would have been far worse without this little trick.  So I brought in this photo.  Just drag it into photoshop. Ctri-A (select all) Ctrl-C (copy to clipboard, switch to the other window and Ctrl-V (paste into new layer) Make the layer 50% transparent, hit Ctrl-T (free transform) and drag the corner with the shift key held down to scale the image to fit.

You can see that my roof is still way off, but I'm going to accept that for this image.  All I want from the photo are a few little details around the edges to create the illusion of reality. So I create a mask and fill it with grey. If I made it all black the photo would be completely transparent so I couldn't see what I was doing.  Now I add white to the mask for the areas I want to show.  I need the trees, the external balcony and altar and the path.  Once I have the white (or pale grey) in place I can crank up the levels so the darker grey areas turn to black hiding the rest of the photo.

I have a library of people & trees etc on white backgrounds that I have collected over the years.  If I drag these in onto a new layer and set it to "Multiply" the white will disappear.  Take care with placement and scaling of figures.  I always site their layers to about 75% transparency to blend in better.  Add some trees and some birds.  Scaling and placement are crucial.  You can learn all the software tricks you like, but it's never a substitute for composition.  You need a good eye and that usually comes from drawing by hand.  The digital world is great, but don't neglect your own hand-eye skills.  The computer inside your head is the sine qua non of successful image making.

The birds have gone in at about 30% transparency.  Everything fades with distance.  Just for fun I added a lens flare to the edge of the roof over the entrance.  Actually this is quite an interesting composition because the main centre of interest is the chapel entrance way over to the bottom left.  I'm using the girl and the tree to bounce your eye into the four guys.  Also the birds and the lens flare act as vertical markers.  I wasn't really thinking about this consciously at the time but that's how it works.  Then there's a second focus of interest way over to the right, and again I'm using trees and people to guide you in to the altar. 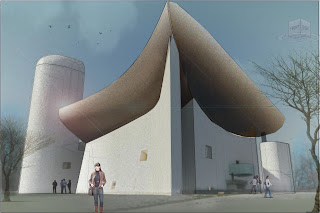 By the way, one trick to placing people is to have a thin horizontal shadow line where they touch the ground.  Needs to be subtly done, with transparency.
I like the subtle colours of this image, very misty with faded browns and blues.  But after saving the image I decided to play around with some filters.  Cranking up the saturation and contrast, then using chalk & charcoal effect.  You can also combine these on different layers and use masks again to fade from one to the other.  The are plenty of choices.  You need to have a clear idea of the image that suits your design concept.  You also need to ask yourself whether your images bear any relation to reality.  Smoke and mirrors is all very well, but at some point your client is looking for a real building.

Next one uses "graphic pen" flter, then an interior shot that needed quite heavy processing to disguise the crudeness of the render.  Using pixelise as well as the usual masks and layering to create an image that captures the idea of a minimalist space that glows with filtered light.

Last 2 images feature inverting one of the layers and making a feature of the transparency to reveal structural elements, then one with coloured pencil effect that fades to white at the edges.

I have been referring to Photoshop, but there are freeware offerings out there (Gimp for example) that can do most of the same stuff.  I sometimes feel a bit guilty when I spend two or three hours building up an image with a dozen or more layers, but it's a learning experience and you need that depth of learning to hone your skills for the 15 minute factory that will take the multiple views that Revit can churn out and convert them into really compelling and atmospheric images.