Two posts back I imagined 4 different scenarios in which we might decide to specify a Corinthian column, how that might affect the procurement process & therefore the way we would document that element

Scenario 1 envisaged a lightweight "placeholder" family, backed up by a specification that calls for a "design & manufacture" specialist.  So I decided to take a crack at making this family & went on to try it out in context.  The context then took on a life of its own & became the Pantheon (Rome not Paris) 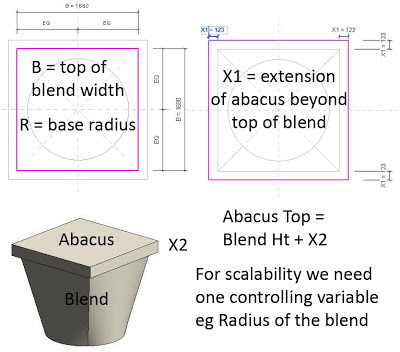 The capital is a blend plus an extrusion. The important thing for scalability is to have one parameter that controls the size of all the others.  I chose the Radius at the base of the capital, because this could then be linked to the Radius at the top of the shaft. 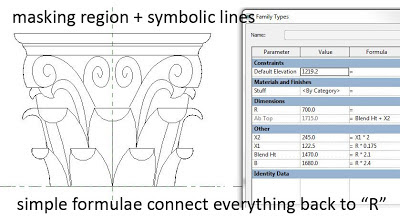 Simple formulae were used to link all the other parameters back to this Radius.  In elevations views, the solid elements are switched off and replaced by a masking region plus symbolic lines.  I tried to keep the number of lines down to a minimum that could fool the brain into saying "Corinthian Capital". 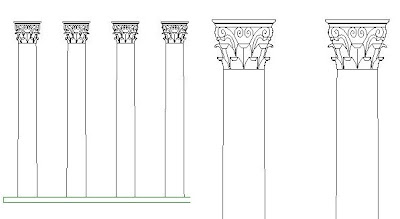 Testing out the column in context took me to the Pantheon.  I'm feeling fairly good about this. 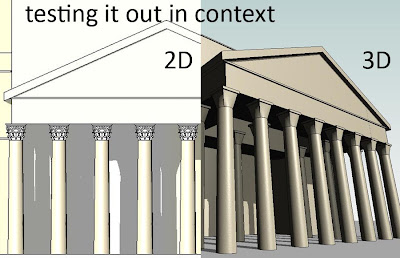 Then to try out the scalability, there are some internal niches with much smaller columns.  Had some strange behaviour where the niche family flipped to the wrong side of the wall.

This is where I started to get carried away.  I remembered Zach's coffer dome from way back, so I had to have a go at this.  Actually the top part of the dome is smooth, (which was easy to do) and the coffers are all eccentric to compensate for perspective (left that for another day)

I couldn't resist going for an internal render, which meant working up just enough internal detail to catch the atmosphere.  A couple of stock RPC people provide a sense of scale. 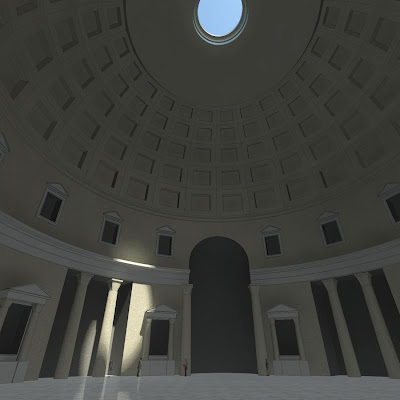 I haven't shown an internal section view yet, because this requires manual scaling of the 2d lines.  Can't see any way around that at present.  If you export them to CAD and reimport, there is a scale factor but I don't think it's possible to parameterise this. 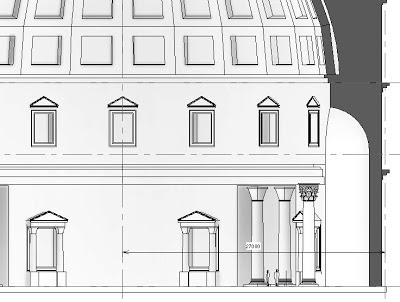 The other shortcoming is that 2d only works when the family is square on to the view, and obviously not all the internal columns are going to be at right angles because they follow the curve of the circle.  You can see the effect in the section.  Only one column is showing the symbolic capital and the manual scaling is slightly out of date ... doesn't quite match the 3D. 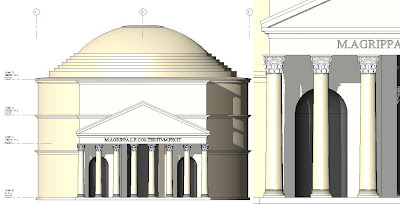 The external elevations are coming on nicely, but once again the base moulding has to be scaled manually for different column sizes at present.  I'm guessing that Paul Aubin has progressed much further than me on this. 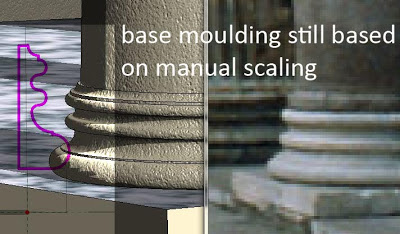 I experimented with the idea of enhancing the capitals in image processing software, but this is a bit tedious really, only had the patience for two.  This was all done before I had developed the "new leaf"  capital I described in my last post.  So I will get around to incorporating an improved version of that into the Pantheon one of these days. 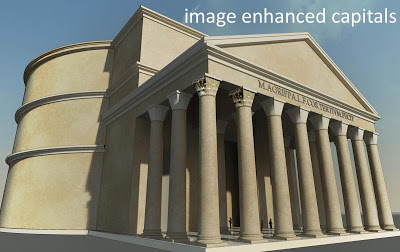 To close I have a double image.  On the left is a reminder of the subtle delicacy of the original, which has survived many centuries of abuse.  On the right is my clumsy attempt to make a scalable capital using old-school Revit extrusions.  Pretty awful.  I thought it might be possible to make something that looked almost as good as the 2d symbolic and so avoid the manual scaling.  Wishful thinking.