This one started as a "how can we make this" query from one of my guys.  We sat down & did it on the spot.  Turned out to be quite easy.  The challenge was to make a dome with a ribbed pattern.  This kind of thing is quite common in the Gulf Region.  It's interesting because what seems like a simple arc in plan turns into a more complex curve when mapped onto a spherical surface.

I started with a generic model family and created a hemisphere.  Just a simple revolve.  Then cut into this with an eye-shaped void.  The sketch comprises two arcs starting at the centre of the sphere and ending on the circumference.  This creates two edges.  We can use one of them to create a sweep using the "pick 3d edge" option.  I used a circle for the profile, always the simplest approach when testing a new idea. 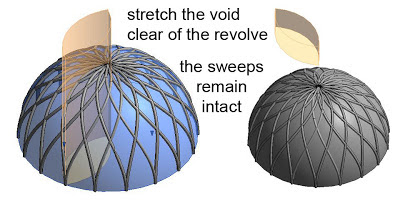 As a further exercise I deleted everything except a pair of sweeps then saved this as a component.  Nested this into another family and arrayed it around.  This gives extra stability and you can parameterise the no of elements.  Would be nice to set the radius of the dome as a parameter too, but I'm not sure that's possible with this method.

The second part of the post is quite different, but also has to do with domes.  For this one I have to credit Marcello for the original germ of an idea.  I have been thinking about combining his morphing idea with my scalable rectangular rig.  During the early hours of this morning I had the idea of a parametric dome family where the curve of the revolve can morph between two curves.  During lunch hour I was able to flesh this out a bit. 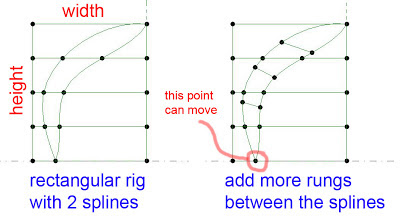 Start with a rectangular rig, it has width & height parameters.  Add some horizontal rungs. 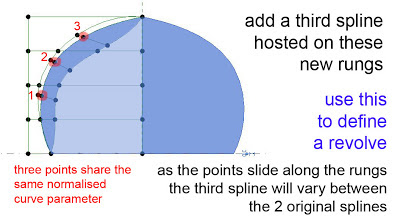 Now you can drape 2 splines across these rungs.  The curves need to be different in character.  Create another set of rungs between these splines.  Host points on these and link them all to the SAME normalised curve parameter.  Spline through points.   Now you have spline 3 and which is dependent on splines 1 & 2.  Set the NCP to zero and it will lie on top of spline 1, set NCP to 1 and it will shift to spline 2. 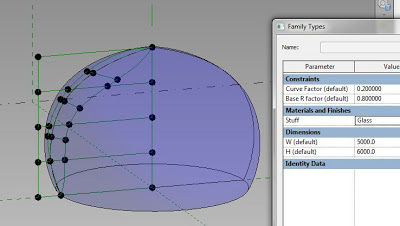 I called my NCP "curve factor" and I also added a "Base R factor" .  This is another NCP and it controls the 3 points at the bottom ends of the 3 splines.  These all lie on top of each other.  Maybe I could have had all 3 splines sharing the same point, but the way I made it I kept the points separate and just brought them together at the end.  I used instance parameters throughout so I could lay out a grid of domes and vary the parameters in a systematic way without the bother of naming a whole bunch of types. 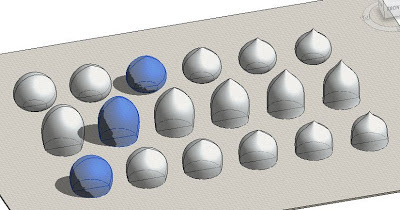 The row nearest to us shows the morphing behaviour, going from zero to 1 in 5 equal steps.  The next row is a copy of this with the height increased.  The third row is another copy with the base pulled in to a narrower diameter.
Posted by Andy Milburn at 6:07 PM