Continuing with the theme of Rigs for lofting profiles in Point World, this is what I call the "Freehand Spline" rig.  It's freehand in the sense that not everything is subject to dialogue box control.  To make some kinds of changes you have to open up the family and manipulate it directly. 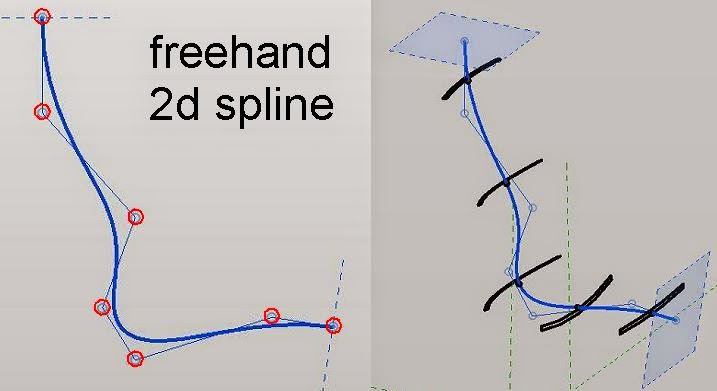 I grew up with freehand drawing, so I have no problem with that.  Parametric dialogues are great in their place, but there is still a lot to be said for the direct, intuitive approach.  Witness the success of finger poking devices in recent years. 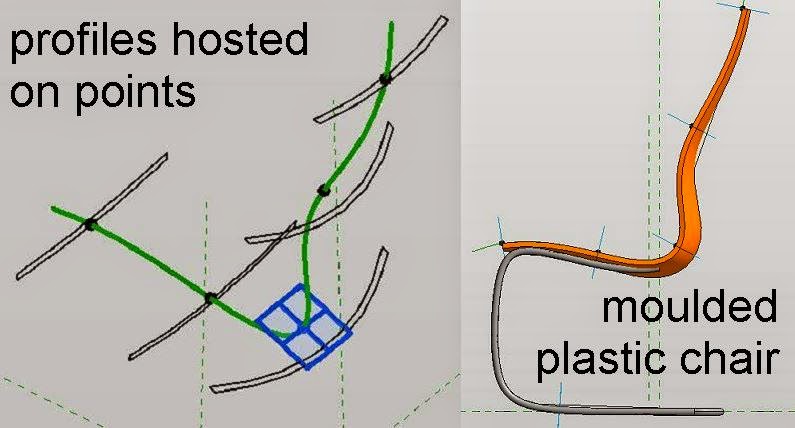 You could make a reasonable go at it in Vanilla using a sweep tapered off at the ends with void cuts.  I've chosen to do it in Point World which offers a slightly more elegant solution and allows more subtle variation to the shape.  The profile I used for my first example can be varied in both width & curvature. 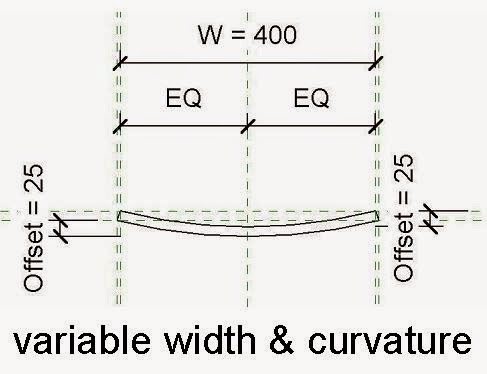 So the chair is more curved in the middle where you sit, and rather flatter at the ends.  This is most evident in a side-on close-up. 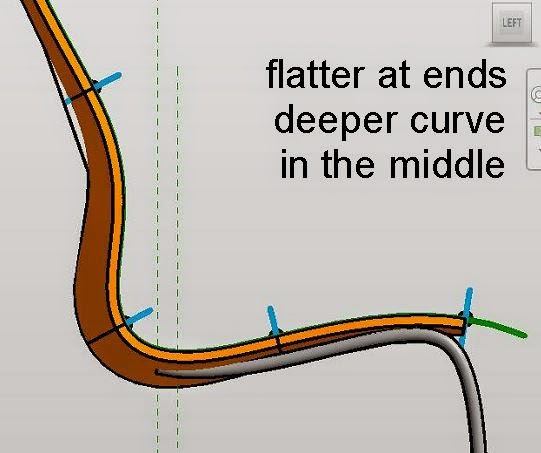 I experimented with a few different profiles.  Most of the complex profiles refused to "create form" but eventually I found one that gives an upholstered cushion effect, based on a 3d spline and a straight line. 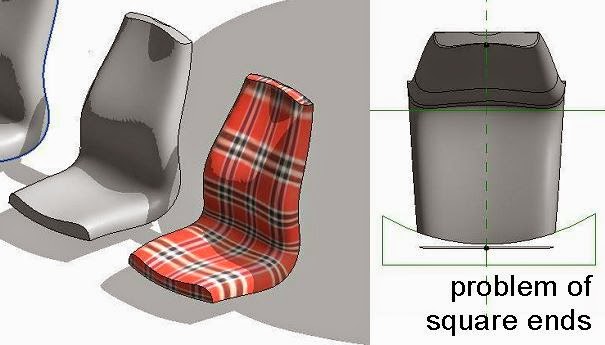 This varies quite nicely based on a single width parameter. 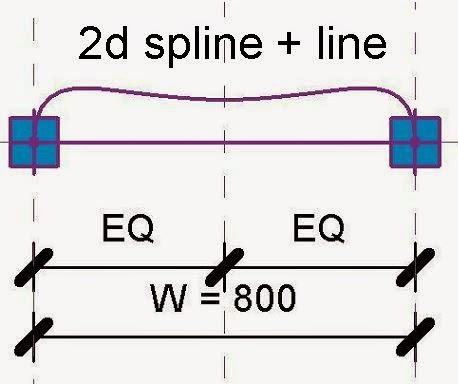 The irony is, that the most elegant form to acrue from these experiments is based on a rectangular profile and could surely be made quite convincingly in vanilla.
The base is lifted straight from the space chair that I featured a couple of weeks back. 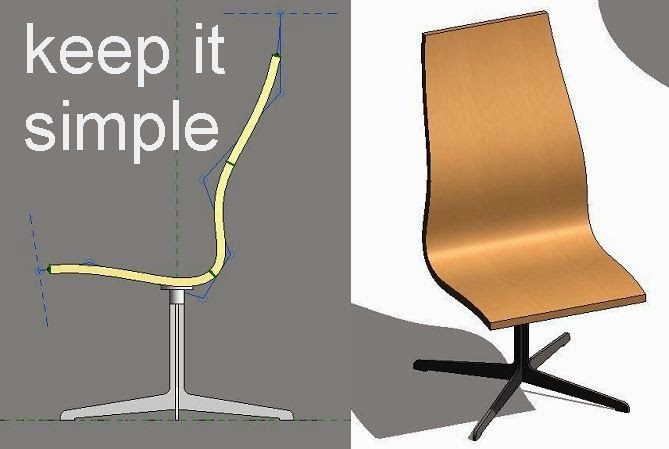 So what are the advantages of Point World in this particular case ?

First of all there is the ability to modify the spline directly and get immediate feedback on the resulting shape.  In Vanilla you would have to "edit sweep", "sketch path" make the changes, "finish path" & "finish sweep"

Secondly you avoid the need for at least one void cut to taper the back of the chair (two if you want to taper the seat slightly also)  Apart from appearing rather clumsy when selected in family editor, these cuts inevitably leave small seams on the edge of the seat. 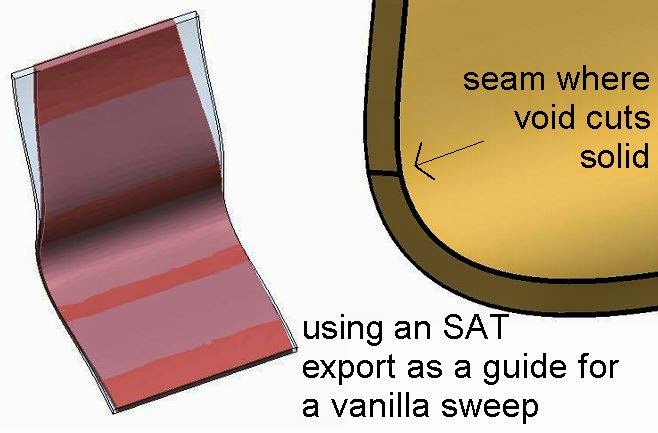 So for the sake of experimental completeness I decided to make 3 versions of this chair.  The first is based on the adaptive template. It's the first one I showed.  The second is pure vanilla, with void cuts, as above.  The third is vanilla, but the seat is taken from point world version, exported to SAT, reimported and exploded. 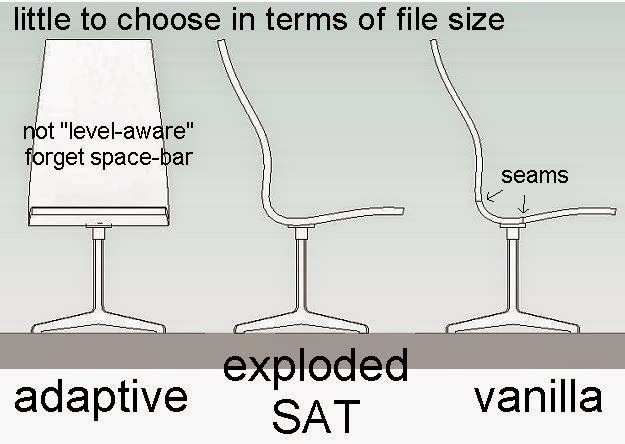 The adaptive version can be opened up in family editor and the shape adjusted using Point World techniques. On the down side it behaves strangely.  It will not respond to the level & offset parameters in the properties dialogue.  When you press space-bar, instead of rotating 90 it jumps several metres to one side.  On subsequent presses it swings around in a cirle, returning to base on the fourth press.  You can avoid this be making it as a mass family, then you just have the "wrong category" problem.

The pure vanilla version works fine, but I find it hard to love those orange voids that jump into life whenever you touch any geometry.  "Crude but effective" seems apt. 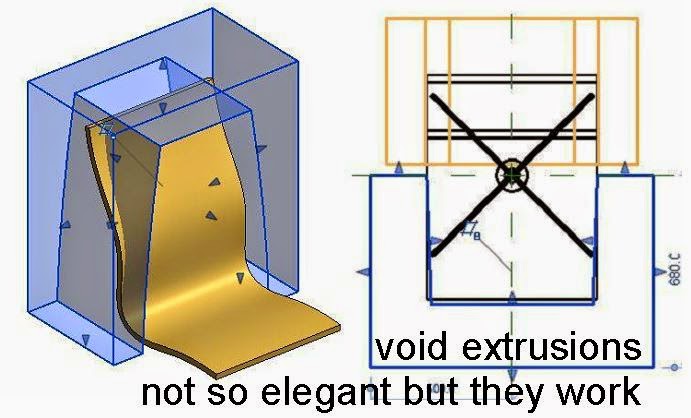 I thought it might be fun to round the edges off using "pick-edges" mode for a void sweep.  Would have been exciting if it worked, but it didn't.  You can round off one side at a time, but this leaves an awkward little gap at the end.  Also attempting to add the next side yields one of those "circular chaing of references" errors. 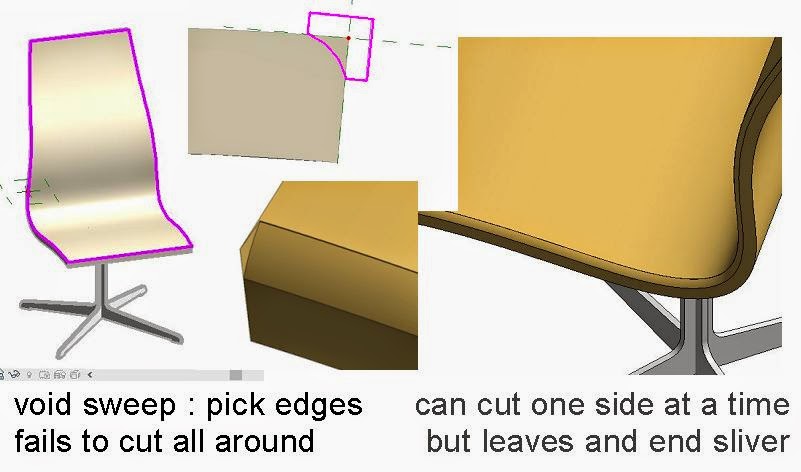 It is possible to add a bullnose edging using "pick-edges" but no use trying to "join geometry" to hide the joint line. Destined to fail. 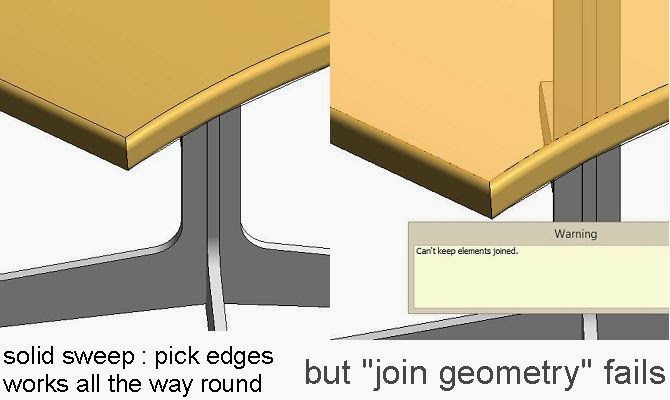 My next brainwave was a thicker rectangle with an edging that mimics upholstery. This worked fine. 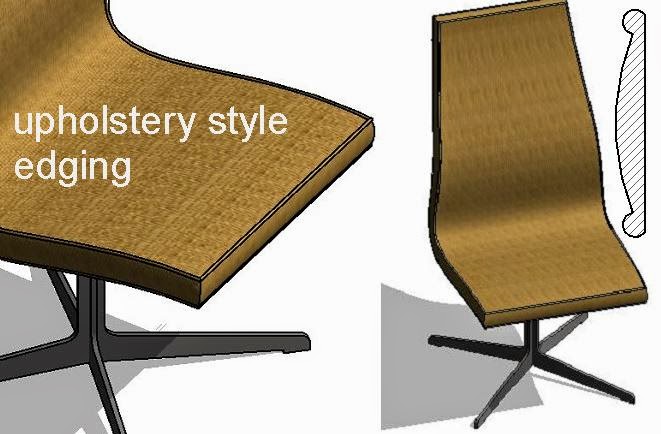 So why not make the seat less flat, thinks I.  Turns out that a double hump refused to loft itself along a spline.  One node too many. 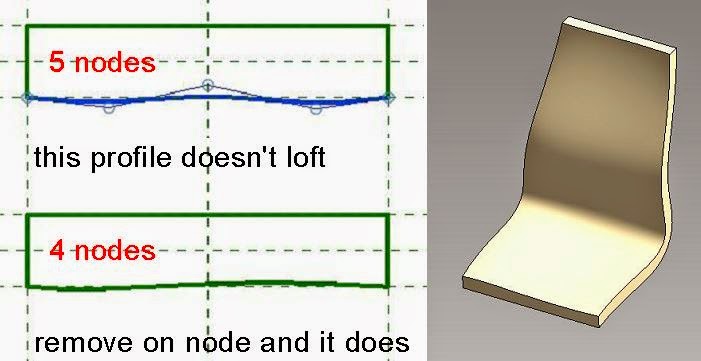 The lop-sided nature of the "4 node" curve is a little odd perhaps, but beggars can't be choosers.

It turns out that you can delete the seat and the edging remains intact, which is just as well because the new geometry won't take a "pick=edge" sweep.  You can copy-paste between families to drop a curvy seat into a straight edging. 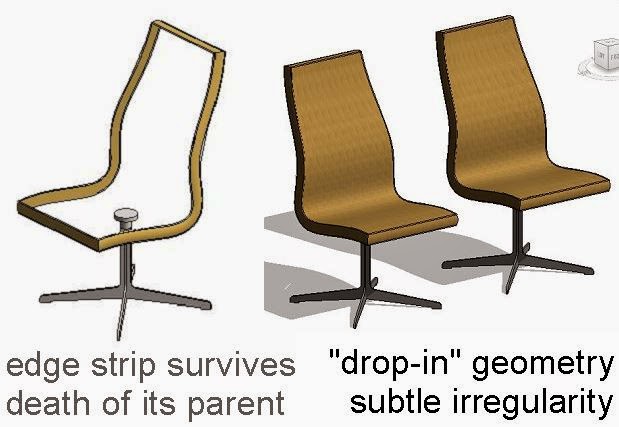 The difference is extremely subtle, even when you exaggerate the curve. The eye is fooled by the straightness of the edge I think.  Using a patterned material makes the curvature more obvious, but is it really worth it ?  I'm not sure, but I'm determined to keep trying to generate furniture families with a softer look. 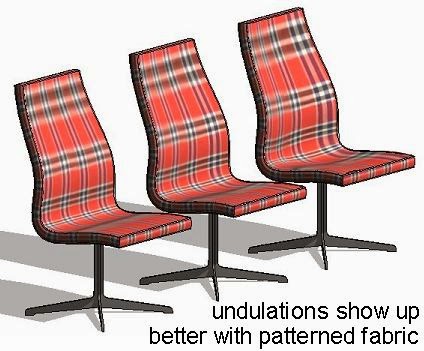 It seems that the edging is the most expensive piece in this family. File size more than doubles.  So I tried ditching the edging and cutting off the ends with a curved void. 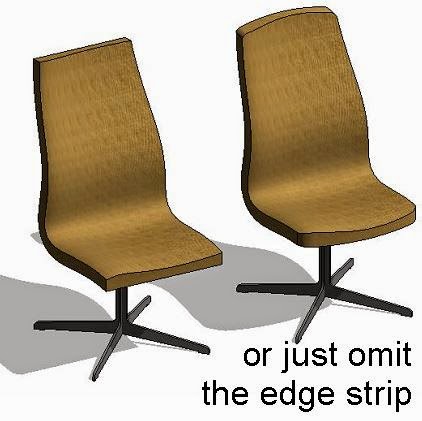 I went on to experiment with 2 solids hosted on the same spline. Also attempted to reduce the "flat end" effect by grading the profile size down in a series of countours. 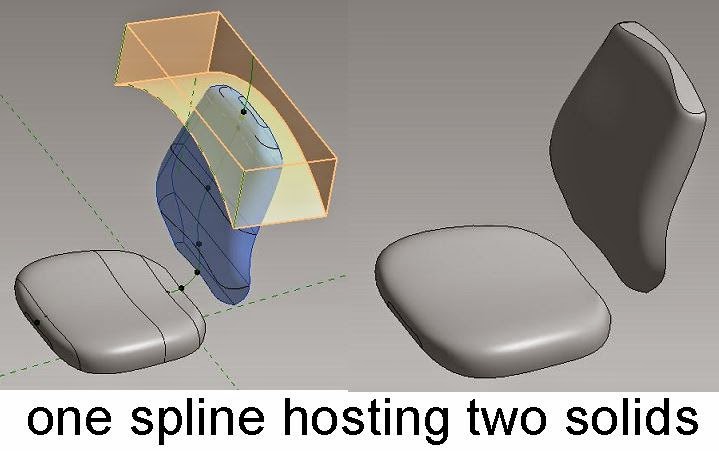 And that's the end of my freehand wanderings.  Nothing very dramatic in terms of end results, but an interesting technique all the same. 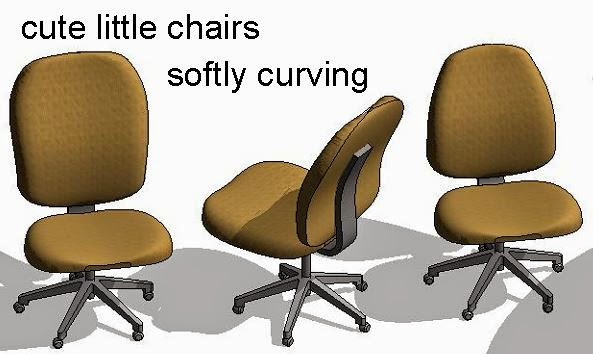