HOW BIG IS YOUR TOILET ?

While preparing the previous post, I was motivated to dash off the basic modelling for a Starc 2 urinal.  Simplicity itself, which is the charm of this particular model.  I haven't tackled the symbolic views yet.  In fact this is almost able to stand up without symbolic work, but for the tendency of rounded edges to dissapear in orthographic views 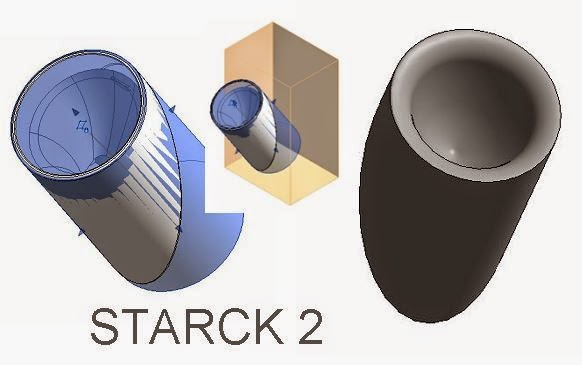 So that's where I stand with my urinal collection.  A nice row of peas in a pod.  The image below shows the original cad versions alongside the natively modeled "improvements".  Still 2 or 3 to be tackled here, and strategies to be chosen: vanilla, point world, exploded CAD or CAD import.  Plus some cleaning up to be done in other cases. 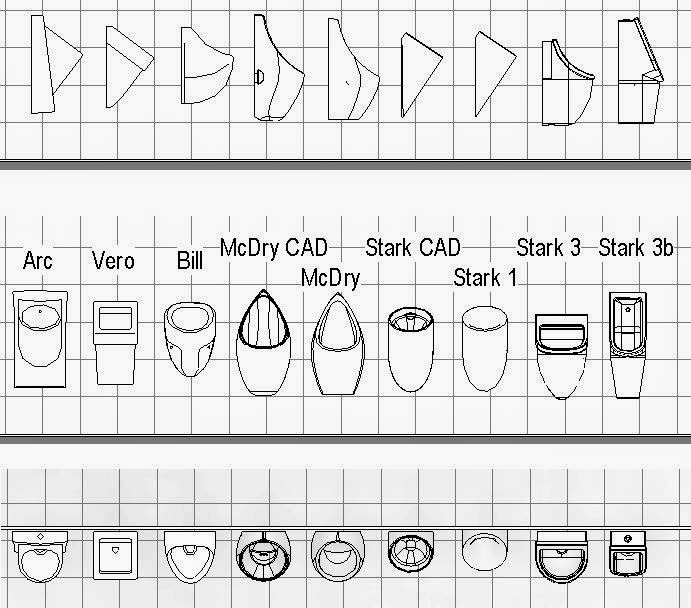 A couple of posts ago I dodged the question of file sizes.  Time to address this now.  For some freeform shapes I have been modelling in Point World, exporting to SAT, rounding off edges, importing to Vanilla and exploding.  Looking at some of the SAT files, it is clear that rounding of sharp edges is an expensive operation, purely in terms of kilobytes. 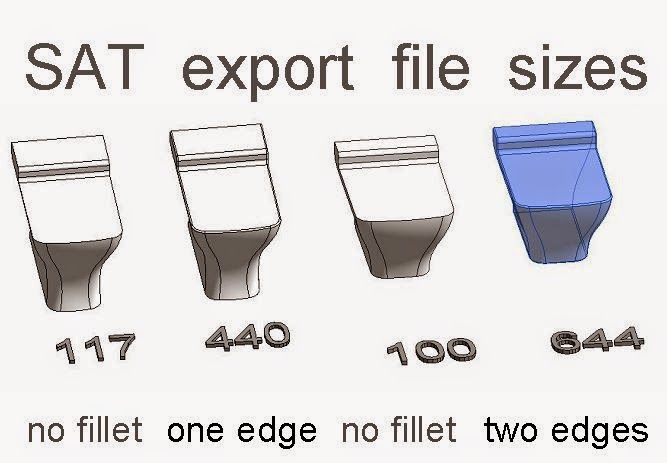 Of course this doesn't necessarily translate into performance issues, or even larger project files.  Interestingly enough, 5mb worth of SAT files when collected into a single RFA end up at less than half that size.  Don't ask me how.

Received wisdom suggests that nesting, constraints and formulae impact performance more than megabytes.  This is good news for sanitaryware because although the geometry is often demanding, the shapes are fixed.  We might nest the taps and add a couple of visibility parameters but that shouldn't be a worry.

When I did the Puravida series, the nested taps on the bidet turned out to be very heavy when made in point world.  It was an interesting modelling exercise, but I managed something close enough in Vanilla at one twentieth of the size.  For a small item like this I think the nurbs version isn't really justified.  Cut your losses (or perhaps it's "cut the suit according to the cloth") 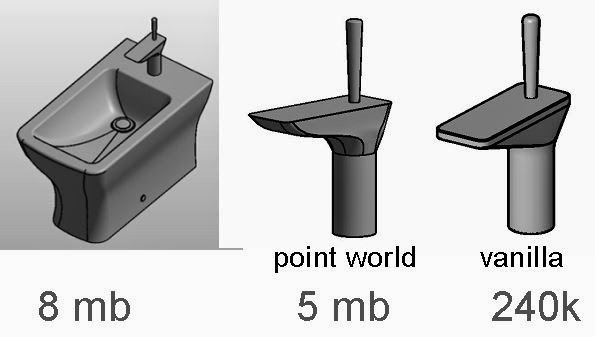 So I ended up with 4 Puravida families weighing in at around 1 to 2mb each.  That's complete with symbolic plans and elevations, material parameters and chrome fittings, but no connectors as yet.  Not being an MEP engineer I rarely get around to adding connectors to families. (my bad) 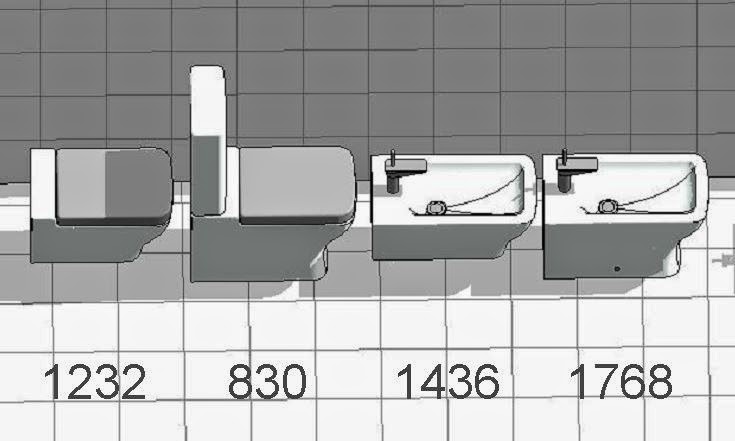 One more example of the unpredictability of file sizes.  I discovered that the downloaded SAT files for Happy D washbasins explode nicely inside Vanilla Revit.  Now the shapes may be fairly simple, but they do include a number of rounded edges.  My family has nested taps, visibility controls and 3 items of exploded geometry (1 basin plus 2 pedestals)  The whole thing weights in at less than 750 kb. 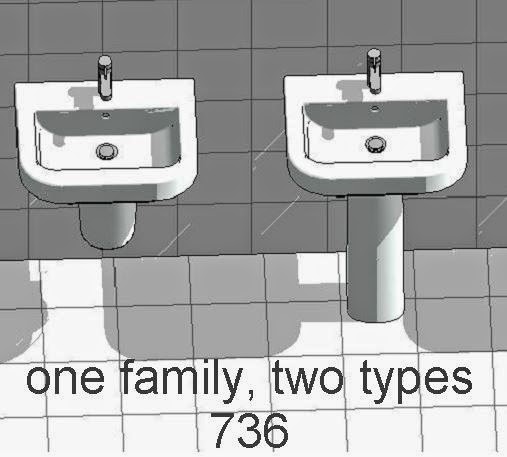 This family also includes symbolics in all 3 directions and for both types.  I don't know what software they used for the modelling, or even if that has any impact on the file size issue.  Would be interested to know if anyone has workflows for generating explodable 3d CAD more simply that my Point World methods.  You can see from the next image that exploding the geometry and adding symbolics results in a much better family. (but read Aaron's comment below) 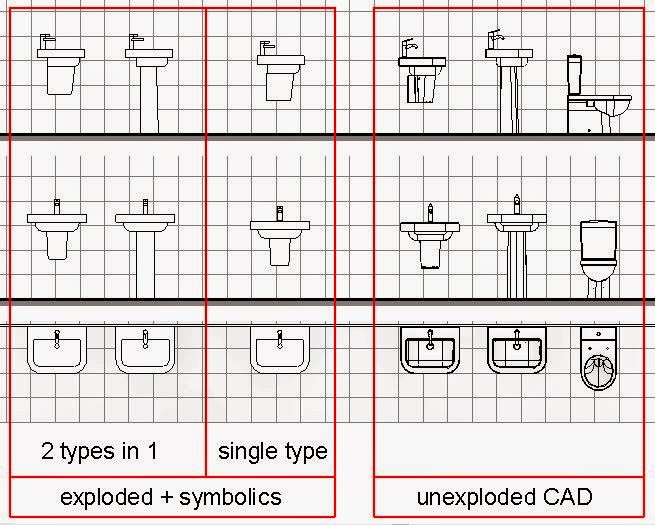 Here is a view of my current Duravit collection.  I'm about ready to share this, and to invite people to contribute to the process of completing the collection.  Who knows, maybe we can even persuade Duravit to come to the party. 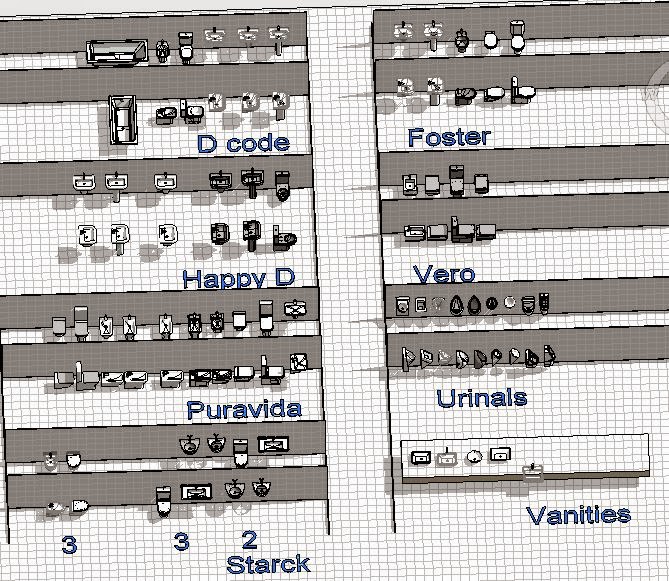 After all, other European manufacturers have started to make the effort.  Here are some families downloaded from the BIM object website.  Don't ask me why the thumbnails have a black background.  Maybe they were made my MEP engineers :-) 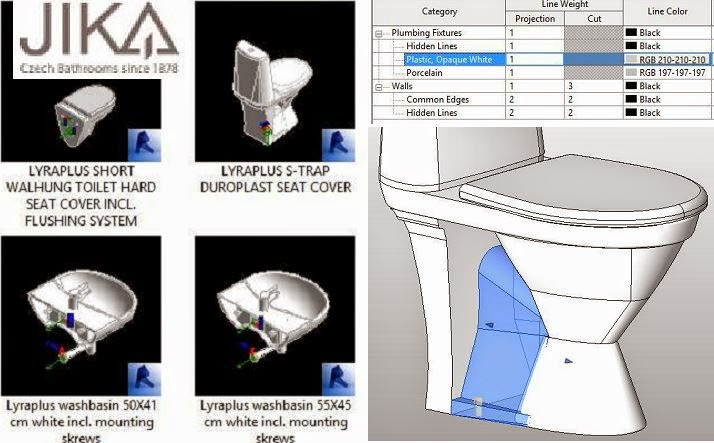 I decided to open these families up and take a good look.  This is all modeled directly in vanilla. Quite a tour-de-force in some ways.  But for my money, there is a certain amount of wasted effort.  I wouldn't have bothered with all that hidden detail around the back of the basins for example.
There may come a time when BIM is used by the plumbers who install the fittings on site to help them visualise the whole process, but we are not there yet by a long way and if we do ever get there, I am not sure that they will be using the same objects that are used by the architects to position all the fittings in a 300 bedroom hotel (for example) Perhaps there will be a hyperlink in the family that takes you to a place in the cloud where all those finer installation details are modeled

Put more simply I am saying "let's model the parts that show in an interior rendering to an acceptable level, but don't get too carried away with unnecessary detail" which abbreviates to KISS.
So I simplified the basin considerably, cleaned the geometry up a bit so as to eliminate most of the seams, left out some of the finer detail on the bottle trap and generally felt like I had created a somewhat better family at the end of the day. 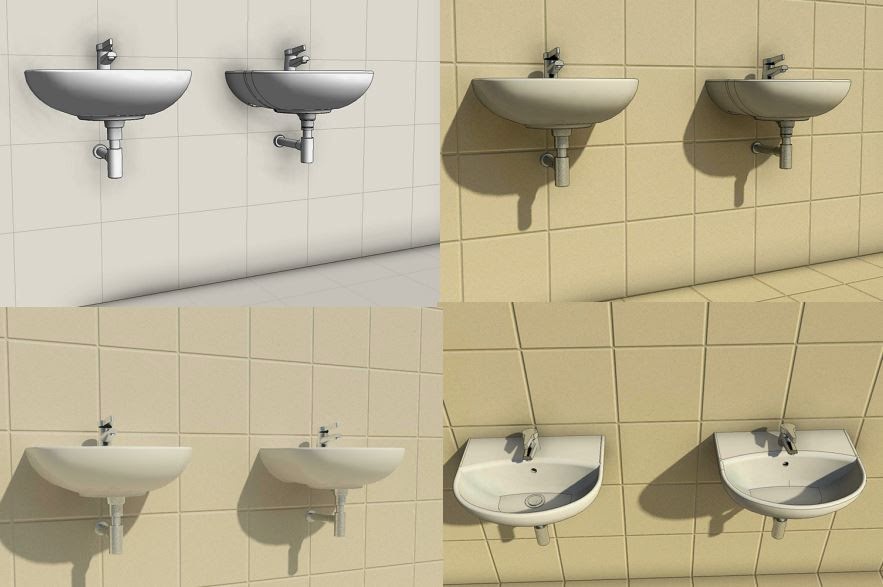 I also added symbolics to the elevations and a masking region in plan view.  My approach to symbolics is to use them selectively.  With rectangular objects / sharp-edged objects I would tend to let the 3d geometry do the work, but if the shapes are "blobby" or there are too many edges/seams showing up in plan or elevation, symbolics are worth considering.  Sanitary ware is a classic case because the shapes are "blobby" and the sizes are fixed. (no struggling to get the 2d and 3d to flex in harmony) 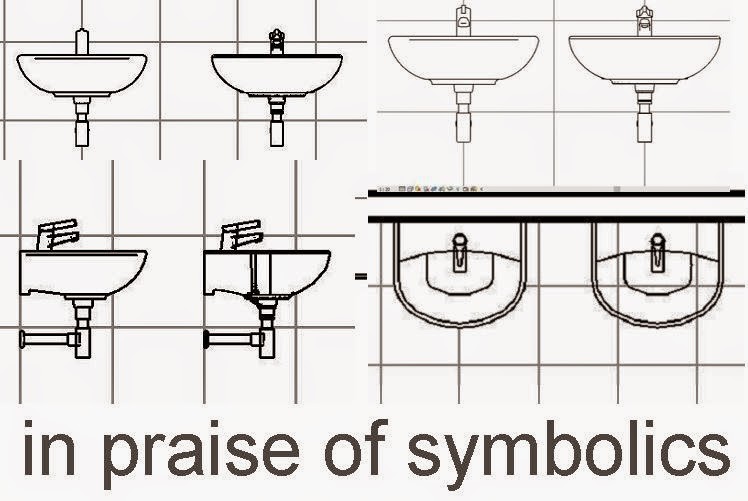 Just out of interest, this family started at around 560kb, dropped to around 350 after I simplified (not immediately after, but 2 or 3 saves later)  Then it went back up to around 470 with the additional symbolics.  Lean and mean.

By the way, none of the above is intended as a criticism of BIM object or the manufacturer Jika, or whoever modeled the original family.  I think they have all made significant contributions to the global BIM effort and I enjoyed building on the platform they provided.  I hope they can also accept my suggestions in the positive spirit intended.

Almost ready to share my Duravit collection now.  Hope it's been worth the wait :-)