One of the last sessions I attended at RTC Chicago was about Formit, and I came away full of enthusiasm to sign up for the beta testing now that the web-hosted version was up and running.  But then I saw some really interesting buildings on the long way home.  Robie House, De la Warr Pavilion, Hawksmoor's Limehouse Church ... then the next thing you know it was the Desert Pumpkin, couple of BIM Breakfasts, AUX Dubai, family xmas ... and come January we started on serious overtime at work.

So I didn't get very far with Formit until last Thursday evening when I decided to attempt a quick massing model of Casa del Fascio, a fascinating building that I got to know by means of Revit explorations.

A Tale of 3 Buildings 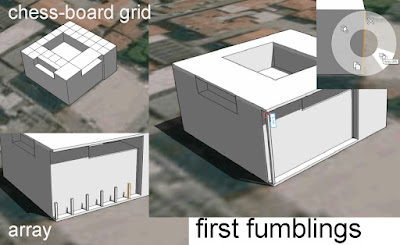 Of course I had to go down a few blind alleys.  Made the mistake of starting in Internet Explorer.  It seems to work, but after a while you realise that lots of bits and pieces are missing.  Then I messed up with one of my arrays and picked up an extra bay along the front facade. 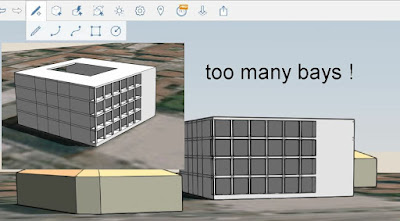 None of this is very accurate.  I was trying to do it half from memory ... simplified and abstracted ... improvising on a theme rather than replicating the original.  Mostly it was a vehicle for getting to grips with Formit.  So I started again in Chrome, and then in Firefox.  Works much better :) 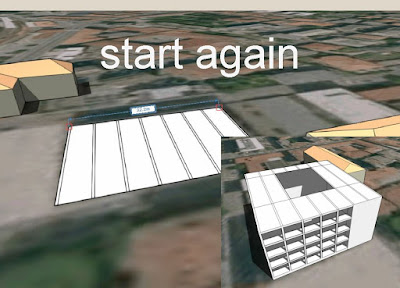 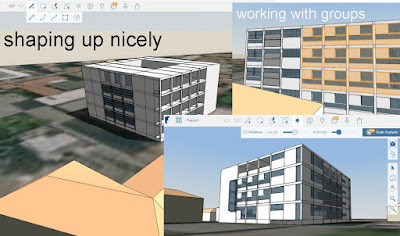 You can save a Formit sketch locally, which is fine, but when you save to A360, the heavy lifters up in the clouds do their stuff and create an RVT for good measure.  In the background of the next image you can see a monster lurking.  That's an import ... basically merging two Formit files (I think)   A couple of years back I did some posts where I was trying to find a way of doing spiky buildings in Revit.  Forms that are easy to make in Sketchup, but then steadfastly refuse to come into Revit as solids. 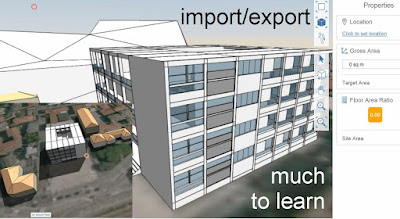 Well it seems to be child's play for Formit.   I made an irregular extrusion,  then triangulated it up by drawing lines and push-pulling end points like a madman.  Save to the cloud, download the RVT and Bingo!  You have a mass family containing an import instance.  You can go ahead and explode this and apply a material parameter if you want.  It takes mass floors without a complaint.  What's more you can do some more adjustments in Formit, save, download, open family, reload into project ... mass floors update to the new shape.

So that's my first serious attempt to do something useful in Formit and I'm feeling pretty positive.  I'm sure there is much more to come from the developers and certainly I have more to discover and skills to hone.  Also it's going to be important to figure out what to do with it.  Where are its strengths ... when to stop and switch over to "proper BIM", how to optimize the interaction between the two rather different worlds (aka "concept design" and "detailed development")