As I was preparing the latest model for upload the other day, I decided to locate it in the City of London.  I'm talking about the Location tool on the Manage tab in Revit.  It takes you to a mapping service where you can drag a map pin from Revit HQ in Boston Mass to somewhere else on the globe.  Not sure if everyone gets the same service, but I noticed mine was Bing Maps.  I rather like the axo projection this brings up when you zoom in.

What surprised me a bit was the octagonal lanterns and barrel vaults in the South East corner ... almost like Soane's treatment of the last two banking halls he built.  But looking closely it's not quite the same.  This is Herbert Baker paraphrasing Soane.  The proportions and alignments are not quite the same. 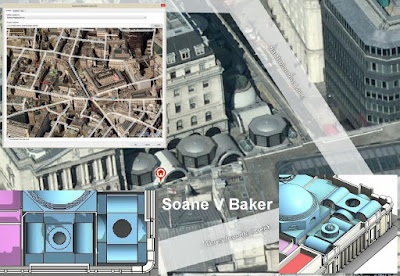 Having set the location I might as well do a solar study.  You can check this out on A360.  Drag the sun around and see the shadows move, reading off the time and date as you go.  Lots of circles in there (rotunda, 5 lanterns, compass directions, the sun of course ... and why not throw in the old Bank logo too ... bit odd the way the spear point slices England in two ... what do you think Ian ?) 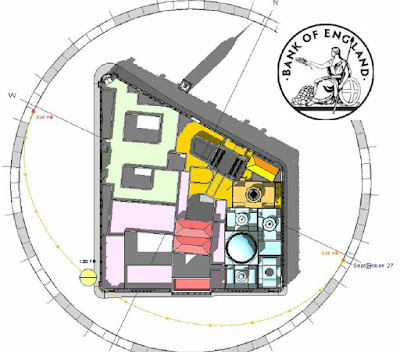 When you think of it, Soane's bank was kind of like a Medieval Town: organised chaos within a perimiter wall.  And when you look at Soane's drawings it's obvious that the screen wall was built like that ... even had a walkway going around that the night watch could patrol.  Apparently they had a room full of pikes for these guys to carry, "just in case". 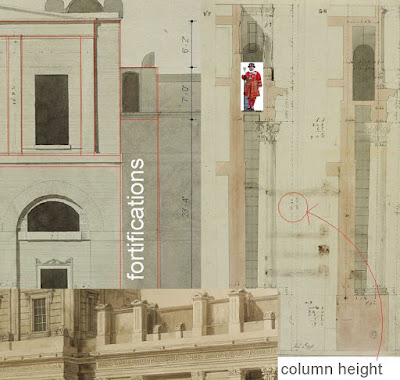 Looking at these drawings brought me back to the parapet ornaments that I am hoping someone will model.  I wanted a better image to stir the troops into action and it struck me that maybe I had seen them in one of his other buildings that I photographed a few weeks ago.  And yes, there are a couple of variations on that theme in the Dulwich Picture Gallery, apart from the phone box at the back. 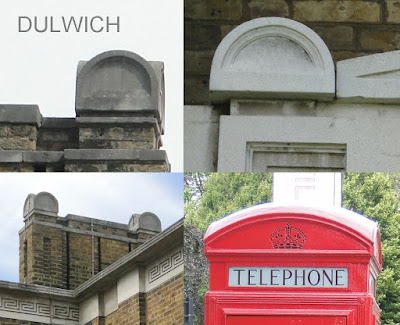 His church opposite Gt Portland Street underground has rather a fun variant with pineapples on sticks coming out the top.  Better not say too much about those in case I slip on a Freudian banana skin. 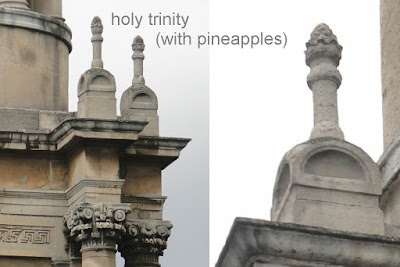 So moving on to his other churches and guess what ... more variations on the same theme.  This is starting to remind me of the planters in Frank Lloyd Wright's Chicago projects that I studied a year ago.  Interesting how architects get fixated on a favourite little detail and worry it to death over the years. 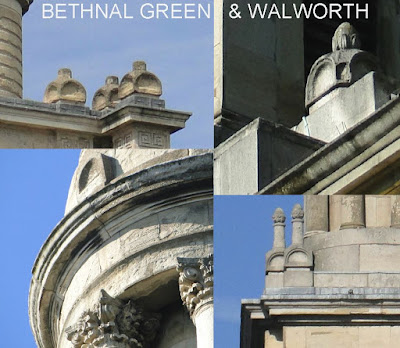 Speaking of death, there it is again on the tomb that he shared with his wife and eldest son.  Tragic that he saw them both buried there long before his turn came around.  Quite a few interesting variations here if you look carefully.  Wouldn't it be fun if someone made a series of parametric families to capture these different interpretations of a round-headed ... what is it anyway?  Bit like an acroterion, but not quite. 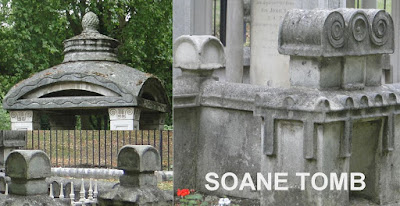 And of course there are his two homes, town and country, both of these had to have them.  I think the ones dotted all over the frontage of the Museum are pretty close to what he used on the Bank actually.  Take that as your model. 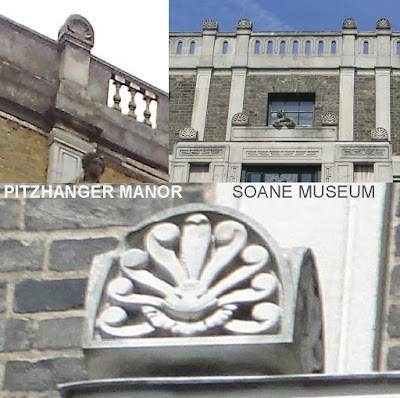 So we are back to Threadneedle Street (the old lady) and a little collage from the hugely impressive archive of drawings that Sir John left behind for us.  Maybe it would be nice to get this "whatever it is" 3d printed, sell them as "John Soane Paperweights"  Would have to scale them down a bit of course, the originals are 2' 1" square (cubed perhaps) 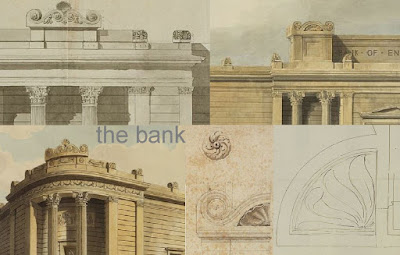 And finally I have to give a shout out to Sheikh Uduman, a member of our local BIM User Group who has stuck his hand up and contributed 3 families in response to my appeal.  See how easy it is ?  Why not throw something into the pot ?

So that's it, lumps of stone that our hero left around all over the place, as if to say "John Soane was Here !"
Posted by Andy Milburn at 6:51 PM