Another weekend, another random walk with  my BIM pencil.

I've been thinking for some time about a simplified diagram to convey how Soane's screen wall slowly unfolded over time.  It's not very complicated really once you grasp it, but it took me several weeks of furious modelling and poring over source material before it really sank in.

Would it have turned out the same if he had known the full extents in advance.  Surely not.  At every turn he was forced to accommodate himself to existing circumstances.  Most of his elevations were initially designed as fragments, abutting the work of someone else.  Later on they had to find a second identity, a new symmetry, rhythm & balance, as they expanded to meet a new boundary.

The detailed story of how this impacted on the sub-elements of his compositions will have to wait for another day.  For now I have simply composed a series of in-place extrusions and used Revit's phasing feature wind the calendar forwards.  We started with Sampson's formal set-piece (phase 1 = red) then Taylor's extensions to East & West (phase 2 = pink)

The screen wall makes it's first entrance in act 3 (orange) It's a simple symmetrical wall with a central gateway, wrapping around two corners at the ends, both with different angles.  The odd angles explain the radiused corners, one of which had a rather short life.

Soon enough the Lothbury façade had to be doubled, and the rounded corner replaced by a square block. Perhaps he would have liked to make more of this new, central feature, but he was left with little room for manoevre.  Instead he lavished his attention on the hairpin bend that resulted from the straightening of Princes Street.

We are in the green phase of the NW extension now, and another stretch of façade running down to meet up with Taylor's work.  He managed some kind of symmetry, but it was a little forced and by now he must have had a burning desire to replace Taylor's arched and pedimented creation.

The directors made him wait, and diverted his attention to other matters, but ultimately he got his way and even persuaded them to allow him to reface Sampson's central block.  Again he used the radiused, corner features.  Again he managed to extend the two side facades while maintaining their character and balance.  Ultimately he had created 4 distinct facades, each with its own character, but maintaining a continuity to the whole. 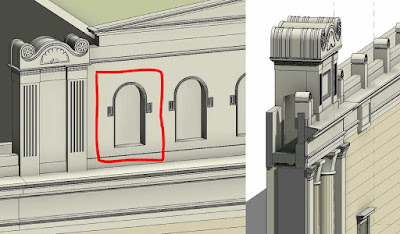 So back to some detailed modelling: the Princes Street façade, in particular the VIP entrance which opens into the Doric Vestibule.  Michael Dunn was good enough to create a family for the openings above the entrance.  They provide light and air to a portion of the battlements walkway as it passes by the dome above the vestibule.  This is an internal dome contained within a simple box. 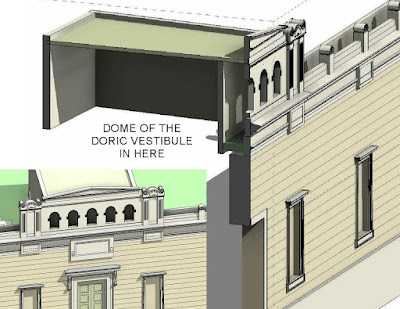 On either side there is a variation on the "sentry boxes" used along Lothbury, so I adapted these to suit.  I need to say that much of this work is done at speed, and although it looks fairly convincing at first glance, could do with some cleaning up.

There are panels along this façade above the blind windows, nestling under the cornice, and above the door, a larger version with his favourite incised Greek Key motif, echoing the ones around the arched openings.  The door itself has scrolled brackets that are scaled up from the ones I used before.  The door is adapted from the ones I made for the Lothbury gates. 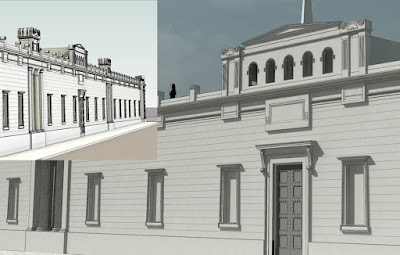 Into the second day of the weekend now, and I decided to clean up the sheets in the base model.  Firstly the Elevations, which used to have jpegs of Soane's preliminary studies as backdrops and various bits of rough setting out, done as drafting over the view.  I've cleaned that off and added some annotations so that these images now go quite well with the block diagrams at the beginning of this post. 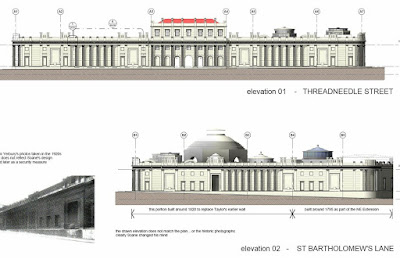 You can see how he had to splice his elevations together, picking something up he had built a decade earlier and weaving it into a new fabric.

There are still a couple of portions that need to be brought up to the same level of detail.  The Tivoli Attic for example, and the door into Taylor's rotunda vestibule.  That will have to be next weekend though. 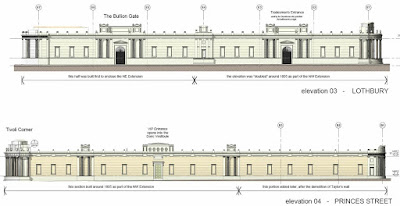 The ground floor plan was suffering a bit from neglect.  Rooms had lost their enclosure, and the North West in particular was lacking in definition.  I needed to feed back the insights I gained from my "Sequencing Soane" study into this model.  For the moment this is just a matter of creating walls and rooms, adjusting alignments. 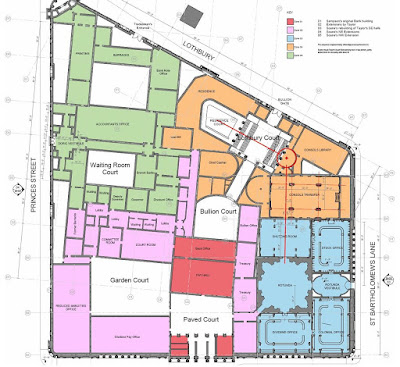 The simplifications I built into the grid on day one create challenges, especially where there are long alignments to be maintained.  But I think it's important to stick to a disciplined approach.  I'm having enough problems with the 5 degrees and 61.5 degrees angles.  It's easy for small errors and irregularities to creep in. 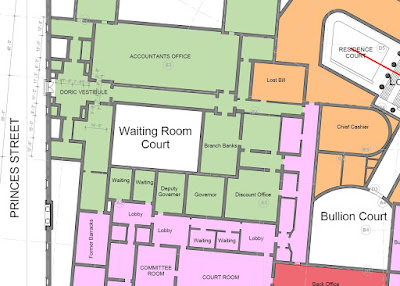 Talking of errors, I finally figured out a couple of weeks ago why the reconstructed Stock Office is 3 steps higher than the rooms on either side.  The clue is in a picture I took of one of the display boards in the museum.  Like Soane himself they were constrained by existing conditions.  Baker had put his lanterns in at a higher level than Soane.  They were able to rebuild the lantern, but not to drop it down to its original level.  So instead they built up the floor. 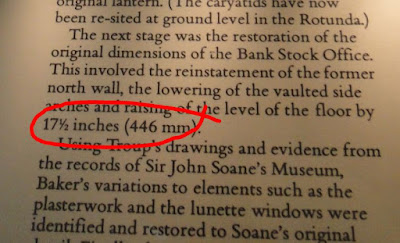 I've been putting off fixing this, but this weekend I managed to fit it in.  So I dropped the Stock office down to and adjusted the undercroft below.  I took the opportunity to adjust the groin vault family I had made before.  Small adjustments but I now had a better idea how I want this to work.  I also had a go at the cellars below the Consols Transfer Office, which was interesting because he used a more cellular approach here, breaking it down into a series of square vaults instead of the longer spans he used for the "nave" of the Stock Office.  Not sure why.  Maybe it's just that he had more freedom to plan this one out from scratch, so he was able to impose a module. 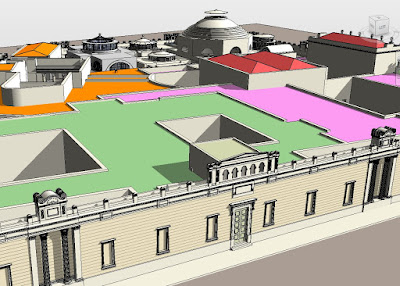 So that was my weekend.  Firstly an overview session, recording my understanding of how Soane's screen wall evolved.  Then a bit of detailed modelling, fleshing out what I call the "VIP Entrance" and revisiting the "Dungeons" below two of the banking halls. 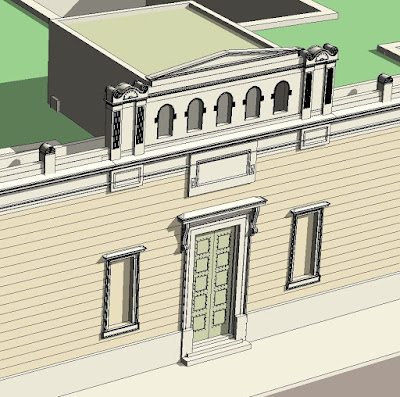 And finally some cleaning up of the plans and elevations, justifying the "BIM" nature of Project Soane (not just pretty renderings, but informative orthographic views with annotations, room objects, colour schemes, phasing diagrams) 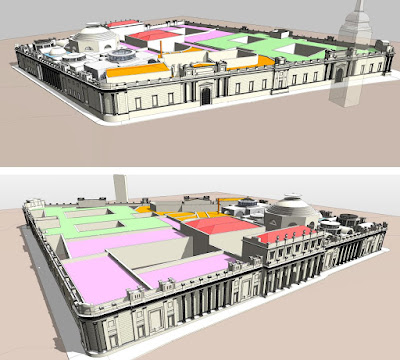