I spent last week in Singapore, visiting my son Tom.  While I was there I hooked up with the BIM Troublemaker aka Phil Lazarus, who kindly arranged for me to give a talk to a group of enthusiastic young reviteers. 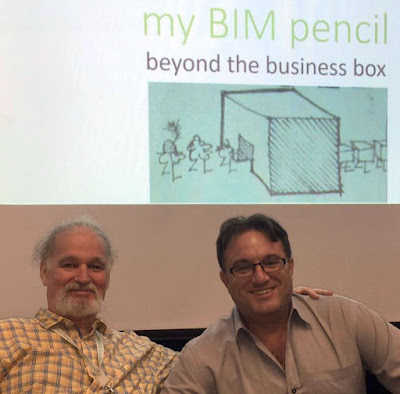 That was the final evening of my short stay and provided a suitable climax.  The venue was Autodesk Singapore, who have offices at Fusionopolis, a fairly new office park location that I happened to have visited earlier that same day, because my son also works in the area.

This post is just a quick travelogue.  I will package up the talk I gave when I get a chance, and also probably post at more length about Singapore, but I wanted to get something out quickly.  I had arrived on friday afternoon and that night, Tom took me down to see the "supertrees".  We had a drink at the top of one of these which gave a splendid view of Marina Bay Sands and the city beyond. 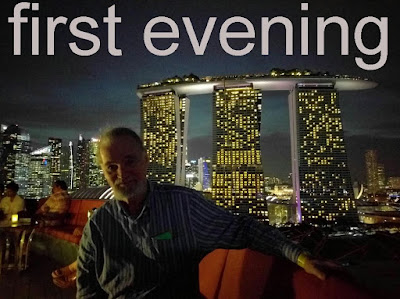 The supertrees themselves have all kinds of pseudobiological functions as well as performing light shows.  They sit partly above a biomass energy plant.  Singapore has an impressive sustainability strategy, recycling as much waste as it can, burning the rest, and using the resulting ash as land-fill, creating new islands and extensions to the southern coastline.

Next day Tom wasn't too well, so I went in to town on my own.  He gave me a plan that took me through China Town.  So much here that I would like to tackle with my BIM Pencil.  The elaborate structural timber of chinese temple roofs have been at the back of my mind for many years.  Not too hard to model in Revit I think, and you would surely gain a much deeper understanding of how they work in the process.  I love the abstraction of chinese lions, especially the vaguely cubist ones in front of the old Bank of China.  These would be quite challenging to model natively with Revit and I'm not sure you would learn anything very useful in the process.  Perhaps I should have taken more pictures and attempted some photogrammetry. 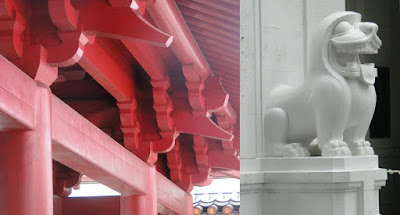 But I really fell in love with the Shophouses.  There would certainly be a great deal to learn by modelling these, and they are eminently well suited to standard BIM modelling techniques.  They seem to be a regional form arising out of a fusion of cultures along a coastline with a rich history of long-distance trade and commerce.  (Penang, Malacca, Kuching)  The windows with their shutters and railings remind me of the ones I saw in Kathmandu, another densely populated ancient trading centre. 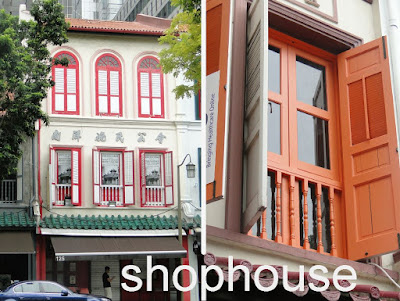 This was my second visit to Singapore.  I spent a single day there 19 years ago, gathering ideas for a project I was embarking on in Harare at that time, when Zimbabwe was still infused with optimism.  I remembered the shophouses along the Boat Quay, which were beginning to be renovated at that time.  Along the river front they were looking very spick and span, but around the back, less so.  I was struck by an art-deco building here standing at an acute corner, like the flat-iron building in New York.  It's been spruced up now of course. 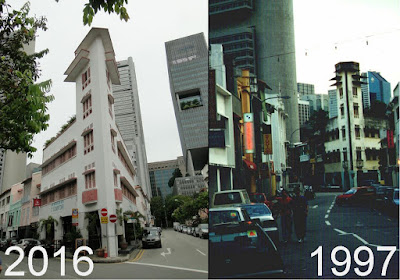 Just across the river is the Civic Centre, with some very grand classical buildings from the colonial era, overshadowed now by skyscrapers.  Another thing I remembered from 1997 was watching cricket in a central green space, like an English village green, inflated in size and transported to the far east. 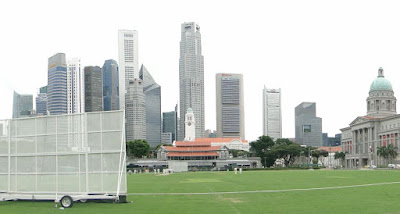 Next day Tom felt well enough to take me around the area where he does his long-distance running.  As it happens he lives very close to a development called Reflections at Keppel Bay, by Daniel Liebeskind, who I have to say is not my favourite architect.  Without wishing to be rude, I find his work just a shade on the pretentious side. 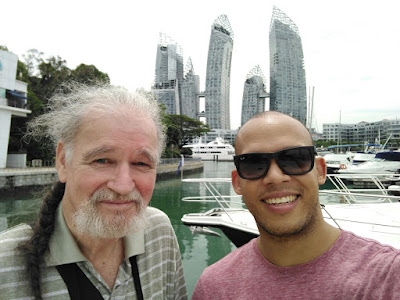 I couldn't find any direct reference to this, but the towers seem to be inspired by a rock outcrop called the dragon's tooth, which no longer exists.  There is a symbolic version of it which was erected in modern times in Labrador Park, which we walked through on the way past Reflections and to the Marina where we had lunch.  (actually there used to be two dragon's teeth, acting as a kind of gateway to guide ships into the bay, and English seamen came up with the nickname "Lot's Wife" so it must have looked a bit like a petrified person) 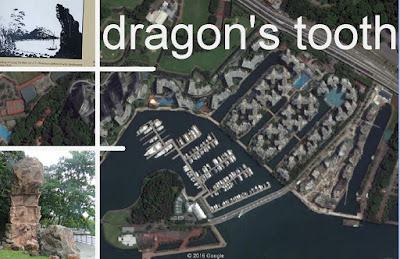 Afer lunch we took a cab to Sentosa, an island theme park which contains one of Singapore's Merlion sculptures.  I don't think there's any connection, but these are also shaped a little like the dragon's tooth.  The Merlion is a modern invention, a tourism mascot from the 1970s I think.  This one stands on a hilltop, and close by is a cable car ride with splendid views of the port, whose cranes rather remind me of giraffes. 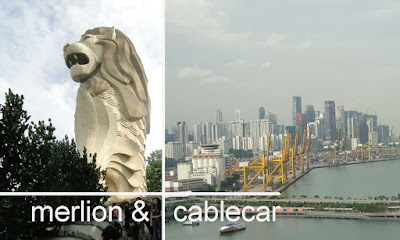 The cable ride takes you to the top of Mt Faber, which is a wonderful rain-forest park.  From here we walked down to Tom's condo, taking a slight detour to check out Henderson Waves, a pedestrian bridge that forms part of a nature trail across the Southern ridges.  This is a splendid structure: beautiful, organic, practical and structurally elegant.  Look it up. 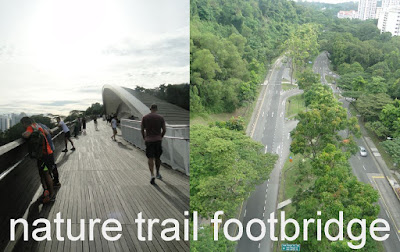 Next day I went in to town on my own again.  I wanted to photograph the old Raffles Hotel, a building reminiscent of the Victoria Falls Hotel which I got to know ver some 20 years ago, as project architect for its refurbishment. There is something special about these grand old colonial hotels with their courtyards, open walkways and classical detailing. What projects they would make to model in Revit.  All my work for VFH was done very simply in 2d using AutoCAD, but I was rather proud of it at the time. 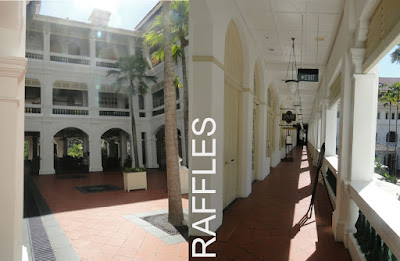 I walked on to the Cathedral & then the Peranakan Museum.  All very interesting but I need to skip forward.  I continued past the Fire Station, the Police Station and Clarke Quays (yuk) until I stumbled across the Parkroyal on Pickering, one of many Singapore buildings with skygardens.  What particularly impressed me though was the way the lower storeys were handled, with GRC mouldings, ("sweeps" in Revit terms), emulating rock strata.  Proceeding through China Town, I ended up at the Urban Redevelopment Authority where there is a splendid "City Museum" which seems to be very effective at engaging the citizenry in the planning process.  There are two very large models on display: one of the whole island and the other of the central areas of the city.  Lots of other interesting exhibits too and it was full of enthusiastic young visitors chattering away. 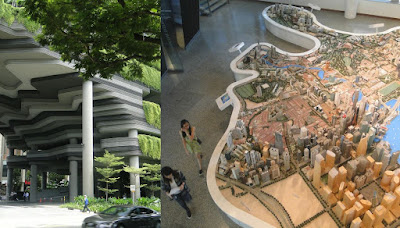 So I was very impressed with Singapore, and intrigued by the comparison with Dubai: lots of similarities and lots of differences.  I shall be reflecting on that for many weeks to come.  Perhaps the most striking difference was the ease of interacting with young local people.  In Dubai I meet lots of creative young people, but they are mostly expatriates and the few local people I come into contact with tend to be somewhat older.  But let's finish with the shophouse typology. 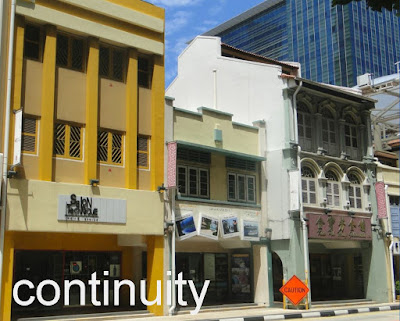 Itis a very resilient and adaptable tradition, as you might expect a "mongrel" to be.  From nineteenth century classical revival to 1930s art deco and beyond it has survived and reinvented itself.  Perhaps the vogue for converting old shophouses to new uses has diverted attention from the need to explore a 21st century version of this form.  Perhaps they exist, but I can't remember seeing them.  Could the multi-storey, mixed-use developments with their sky-gardens also incorporate an ultramodern version of the shohhouse threading through the development at ground floor level? Is there a high tech equivalent of those multi-layered windows with their shutters and railings?  Could we take inspiration from the way the rows of similar but individual units snake along the ground like the trunk of a Chinese dragon ...  regularity and diversity wrapped up in the same package?  I wonder. 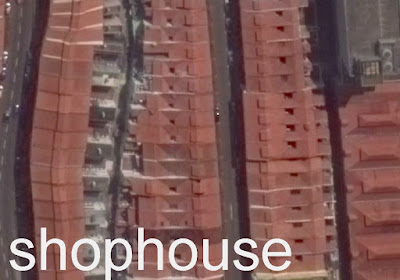