I have been looking at the render gallery for Project Soane.  Very interesting.  Quite a variety of approaches and levels of competence.  I think it's great to see people "just having ago" alongside others who are obviously looking to show off their professional expertise.  Room for both in this type of project I think.

I tend to favour the ones that show some affinity for Soane's own architectural feel.  I'm perfectly happy with some of the "crazy" interpretations, but the gold lame tends to put me off a bit.  There are some great examples of atmospherics, rainy nights with coach and horses speeding by etc.  There are some very interesting animations and VR interpretations also. 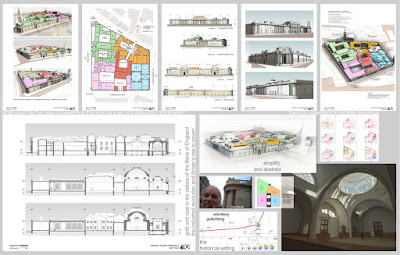 I was particularly gratified to see a lot of submissions based around the exterior screen wall, which I spent many hours figuring out and developing.  It really feels great to have provided a solid base for such an outpouring of creative effort.  Not surprising that many also chose the Consols Transfer Office interior, which Russel Fuller-Hill took such pains to model in considerable detail. I guess he is also getting a kick out of the different interpretations of his model. 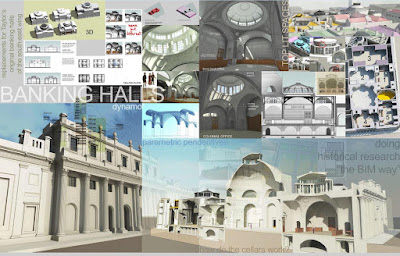 Tivoli corner was quite popular of course, but sadly the cornice moulding must have dropped off accidently in one of the converted formats because it was absent in many of the renders.  Some people obviously noticed and put the cornice back on.  In fact it was really encouraging to see that a few people took the time to compare the models to source material and adjust their models to more accurately reflect Soane's design.  There are a couple of discrepancies in the Consols Transfer Office for example that I pointed out at the time.

The issue here was one of figuring out which drawings to follow, because there are often 4 or 5 different variants available from the preliminary design stage.  Soane commonly explored quite radically different solutions before making a final choice and it's difficult to know which to follow at times.  I made frequent reference to the photos that Frank Yerbury took before the bank was demolished. 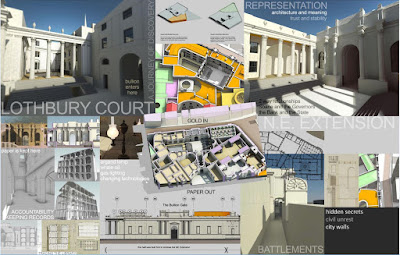 The images included here constituted my "submission" for the rendering stage of Project Soane.  Inverted commas because I'm not a serious contender when it comes to high-end rendering.  I have been focusing my attention on fleshing out the model, continuing to solve the 3-dimensional puzzle, scouring the sources, doing it "the BIM way".  So I put together four presentation boards, each one a collage of images.  It was a way of reflecting on my journey and of gathering my thoughts as I continue to develop the model as a whole.  There are a few areas that lag behind still: I need to insert the staircases for example, and the vaulting of the cellars is little more than half complete.  After that it would be very rewarding to add more detail, bring the whole model closer to the standards set by Russel in the CTO. 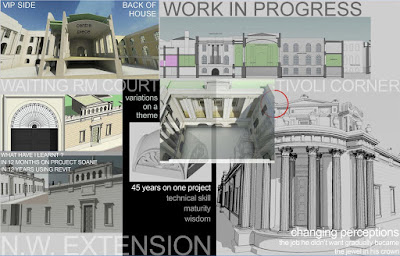 There are already quite a few sheets in the model, but I really would like to expand on this and create something like a set of construction documents.  But all this will require time, so we will have to see whether or not I can retain a long-term enthusiasm for this particular project.  For the moment, all that creative energy on display in the rendering gallery has got me fired up again.