The model as it was at the beginning of this post 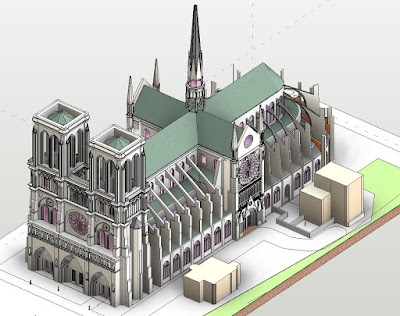 There is a network of maintenance access routes that we are just beginning to understand. The next image was posted on LinkedIn just over a week ago and has had more than 26,000 views. It shows a semi-concealed viewing platform between the two towers, directly above the organ loft. Inside the towers on either side are massive wooden frames to support the church bells. Organ music and the peals of bells: the sounds of medieval Christianity. I digress. 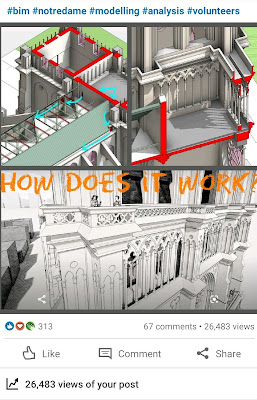 From here you can pass briefly through the corners of the roof void to emerge at eaves level high above the nave on either the North or the South side. With the steep roof on one side, and a stone balustrade on the other, you can walk along a gutter / access gallery, all the way to the junction with the Transepts 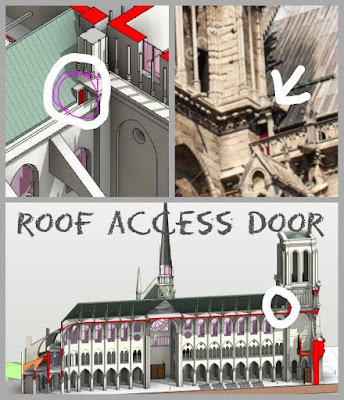 At this point the route gets complicated, and an element of guesswork creeps in. It’s quite clear that the Triforium Gallery (1) is connected to the access gutter (2) by a spiral stair (3) From here it seems likely that there are short passages within the thickness of the wall leading to galleries that cross below the rose windows (North and South) The interior galleries surely have a door at each end, but I am yet to spot the access to the balustraded ledge across the outside. A hinged panel in the glazing perhaps? 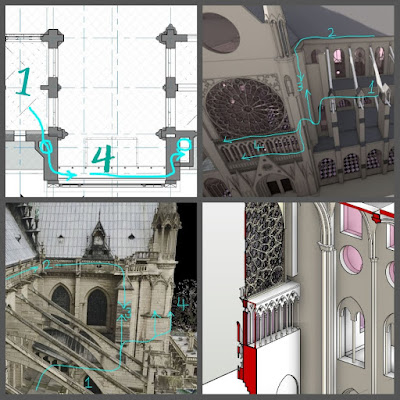 In the last couple of weeks Paul Aubin has done some more work on the flying buttresses. The ones that support the vaults over the nave are now looking really splendid and clearly show the fascinating, steeply sloping channels that funnel water from the high eaves, through cute little pavilions into projecting gargoyles. 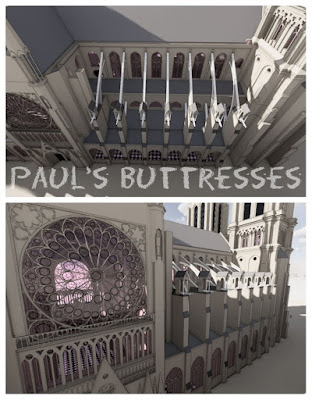 I spent a day or so taking mesh-modelled statues, sourced and processed by Russell Fuller Hill, and inserting them into my placeholder families along the West Front. Two angels either side of a Madonna and child stand on a balcony at the base of the Rose window. Further out to the sides are two more figures also on tall bases. 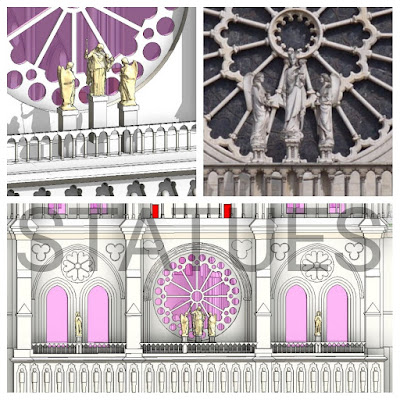 One level down is a continuous row of figures with crowns on their heads, standing within an arcade, between slender columns. There are about 30 figures, all different, but although the mesh models are much closer in spirit to the stone originals, they are far from being an exact match. So we are moving from identical “lego-man” placeholders to an impression of carved statues in historic dress with variety as you move along the row. But in fact there are just three different versions alternating. 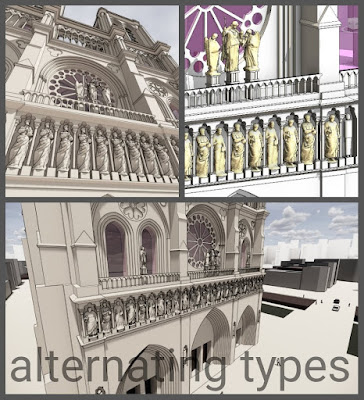 First pass at the eaves detail had been a plain wall standing on an in-place sweep. To take this to the next level I placed a thin floor on top of the sweep and used this to host a railing. For now, the railings are continuous and I’m using a railing I developed for the West Front.  Eventually there should be at least 4 different patterns of stone balustrading in the model. We are just feeling our way gradually towards a more accurate representation. 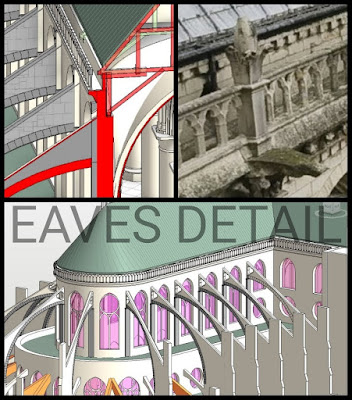 Alfredo has done a great job of modelling the North and South rose windows and in the process tackling the important issue of maintaining clarity at different view scales.  At a glance these windows seem to be the same, but on closer inspection they are completely different: number of segments, whether there is a pane of glass or a mullion in the vertical centre position, etc 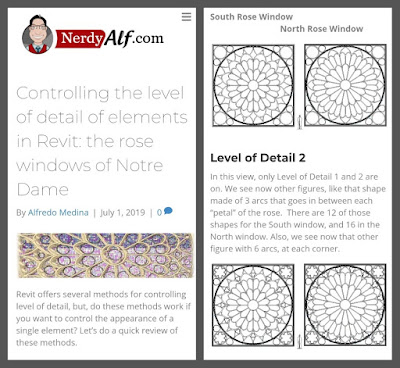 He followed up this work with a very well constructed blog post. I’m using some screen grabs from that here, and you have to say we are starting to get some nice crisp documentation from the model now. Check out the post at this link. 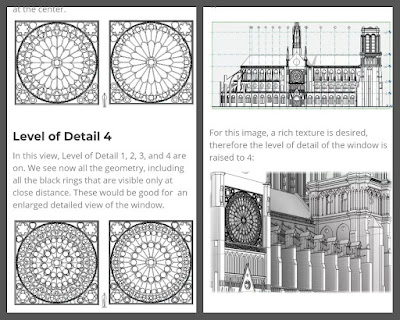 I set up a series of sheets several weeks ago. and the model is taller now than it was then.  This is partly because the bell towers are taller than my original guess, but mostly because Marcel has added the spire.   Those sheets are looking very crowded now, and the top of the spire is chopped off.  I’m starting to think that we need to double the number of sheets and give the individual views a lot more air. 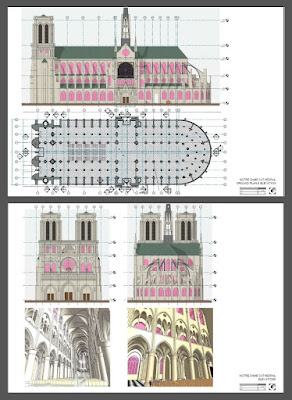 I would really like to add some annotations soon also, but that requires a bit of thought. This is BIM and I don’t want to use text. We need to decide which elements to use and which parameters can host historical information in a structured way. Or maybe I will just start doing it, and learn from my mistakes. It seems that my role on the project is to be the guy who rushes ahead and doesn’t mind making mistakes. Paul and Alfredo, on the other hand are carefully selecting elements that they can develop in a more systematic manner. Marcel I think is somewhere between these two extremes in his work on the roof trusses and the spire. 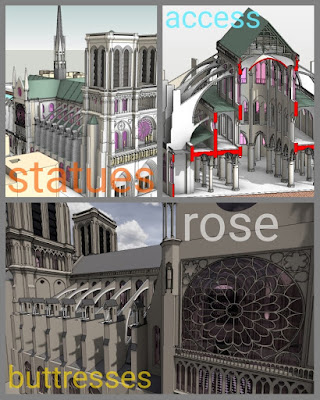 Russell, so far is playing the role of back office support, feeding us with content to use in the model. I think we will need more people doing that kind of work.