You can go on about data as much as you like, we are a visual and social species. We care what things look like and we like to look good for other people. Solving problems is never a purely rational exercise, so even though this is another “BIM geek” post about the nuts & bolts of Project Notre Dame, I’m starting with an image about creating sexy visuals by combining exported views in photoshop. Pausing to create images with visual appeal is a regular part of my work process. Stand back and reflect, “turn the picture upside down”, think about the “why” questions. Ironically the tree is masking one of the most interesting “aha moments” arising from recent work. But I’m getting ahead of myself. 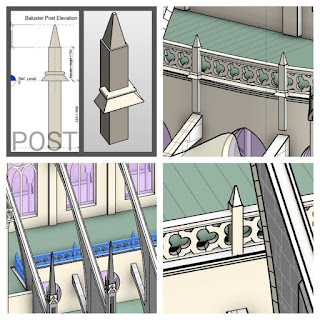 I have been taking Railing types created by Francois in the Mega Cloud and integrating them into the main model. More than 60 people have volunteered to contribute to Project Notre Dame, of these, about a third have accepted the invitation to the Mega Cloud that we are using to package up tasks and make reference material available. I have added a placeholder post the 3 Railing types Francois has created so far. Someone else can develop this further. 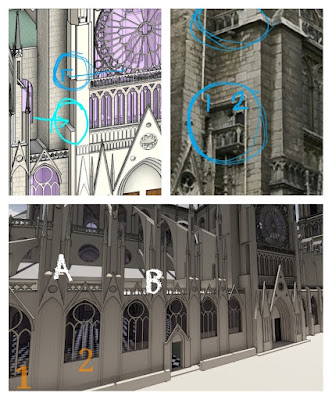 While placing these parapet railings (stone balustrades really) around the North side of the chancel, I noticed some seemingly random changes in level (A & B) Oddly enough the sill levels of the windows also change, but at the next bay along. Difficult to discern reasons here but maybe something will eventually emerge to cast further light.

I notice these things because I’m constantly scanning through reference photos, and something else caught my eye. There are further clues to the access routes I speculated about some weeks ago. 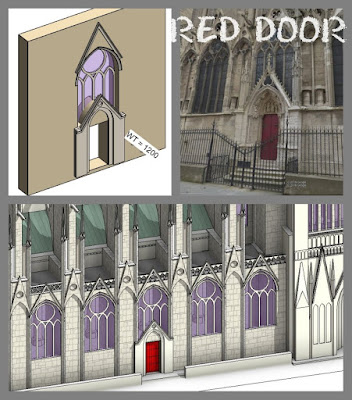 There is a red door on this facade. I’m guessing that there used to be a cloister on this side. The street is called Rue de la Cloitre, so it’s not much of a guess. The monks must have slipped through this door to attend evensong.

I duplicated the window family to create a placeholder version of the red door which one of our volunteers can take further. Raise your metaphorical hands in the Excel file provided. 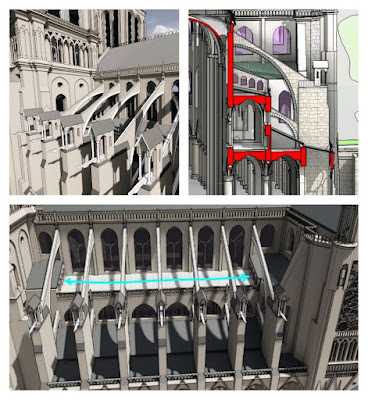 So now we come to the big “AHA!“ moment. Long ago I noticed that the Triforium galleries turned the corner where they meet the Transepts. A little later I noticed that the roof pops up to a higher level where this occurs on the south side. I speculated that this was an innovation introduced by Violet le Duc. Not so. It seems that the lower roof between the two higher ends is the “innovation” and it dates back to the 13th century.

This is described in a pamphlet written by le Duc to explain his restoration strategy. He even considered reverting to the original treatment with smaller windows and a band of plain wall internally. The end bay next to the Bell Towers reflects this original configuration. 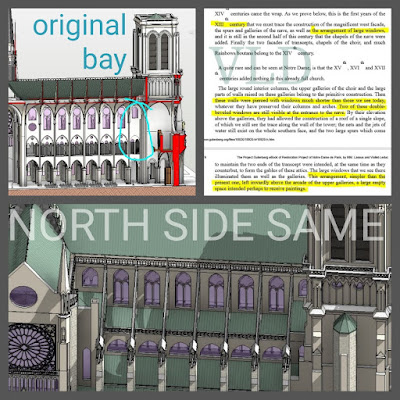 Another pause to create an artist’s impression. The metal railings along the street surely belong to modern times, but they help to provide scale and contrast to the huge mass of stone that is Our Lady of Paris. 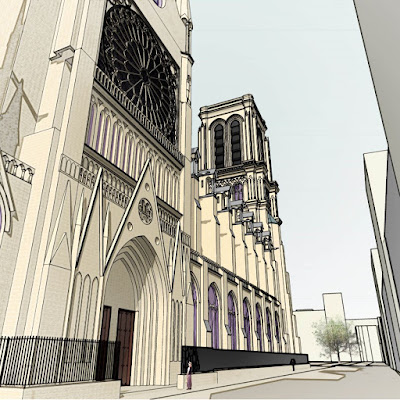 Another placeholder family, and another puzzle. Why was this extra weight needed on the side of one buttress? And why does it only occur on one side of the building?  I love these kinds of questions, and I love the process of gradually getting to know your way around a complex building with a deep history.  Soane’s Bank of England was complex in a different way from Notre Dame: a maze of passageways and rooms of different shapes and sizes.  On the face of it a cathedral is a single, contiguous space but the access system is fascinating, the stone vaults are more varied than I could have imagined, and … who knows what else? 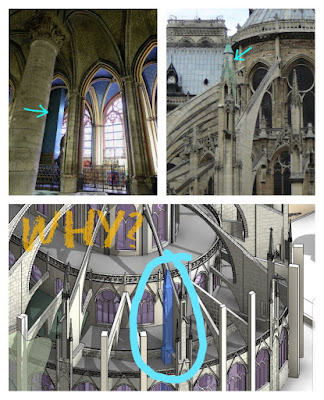 I have placed a couple of Enscape3d executables in the Tasks folder to help our content creators see the bigger picture within which they are playing a vital role. They don’t include the updates to the site model that I made towards the end of the weekend but they will be updated on a regular basis.

If you have a VR headset, use this to view the model. It’s an awesome experience. Thanks to the guys from Iris VR for advice and assistance in this regard. See you all next time. 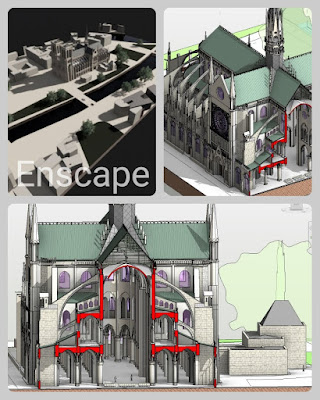