Seems quite a long time since I posted about Our Lady of Paris (:the Big Mama:)


A couple of weeks ago I gave a talk about open BIM. My thesis was that we should keep an open mind about what BIM is “for”.  I used Project Notre Dame as an example. Using the super-powers of the BIM pencil to explore history and tell stories about Humanity. 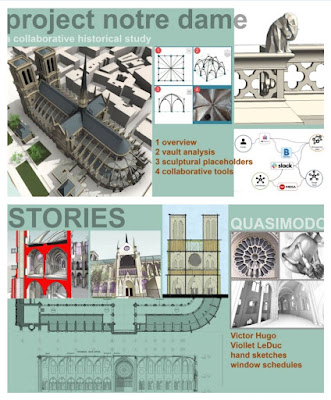 Last weekend I began to prepare for AU and decided to make a simplified model of Notre Dame, like a children’s toy: colourful wooden blocks. A series of view filters allow me to present this as a sequence. This is not a sequence in time. It is simply a way of explaining the overall form of the cathedral. (by the way, 3 and 4 are in the wrong order at the moment) 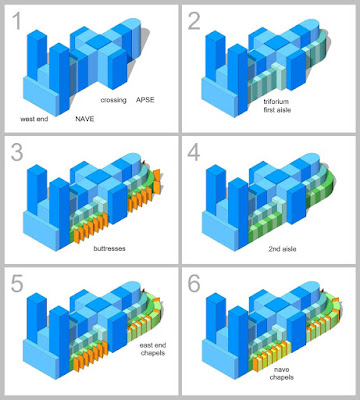 The striped appearance is achieved by half-toning alternate bays and is just a way to make the divisions clearer, as you might do with the rows of a spreadsheet.


The model is full size, and I took the opportunity to try out a revised grid. This is based on comparing various floor plans and moves the crossing slightly towards the west compared to our current detailed model. I don’t think it’s worth the effort of modifying this until we receive more definitive information such as a point cloud. 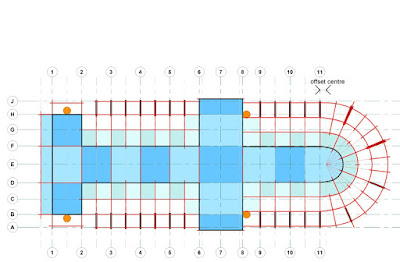 The apse is probably the most intriguing aspect of the setting out, divided into 13 bays on the outer ring, and diminishing inwards to 10 bays, then 5. My guess is that 13 was chosen to match the bay width to adjacent straight bays, (around 5.8m)


But why is the centre point displaced eastwards by almost half a bay? I decided to study this. 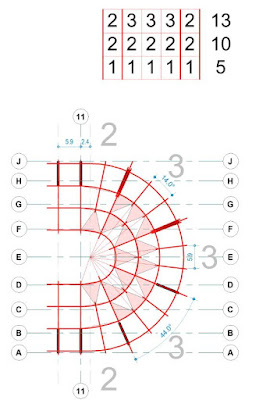 Equal divisions with a common centre result in a rather strange configuration. Some of the triangular vaults are heavily skewed. More seriously there are no longer any continuous lines for the buttress alignments.


But if you restore the hierarchy, the end segments become very squashed as they progress to the inner ring. This appears to be a justification for the offset (to allow that inner ring to become wider at the ends.) I am left wondering about a third option. If we ditch the idea of 13 outer bays and opt for 15 (5 groups of 3) we would have slightly narrower bays, but would that be a deal-breaker?  The whole arrangement would seem to be more rational, but is that what mattered to a medieval master Mason? 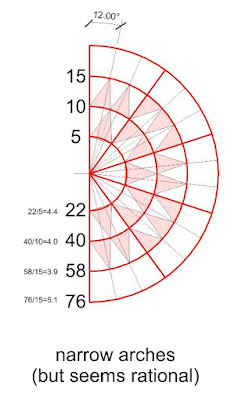 It would be great to look at the apse geometry of several Gothic cathedrals and do a comparative analysis.


But AU beckons. So I added some cylinders and floors to my Revit diagram, to represent maintenance access routes.


More view filters were used to fade back the building and highlight the access skeleton in bright orange. Below is the relevant page from my open BIM talk. Memories of how exciting it was to discover the access routes in the first place, a couple of months ago. 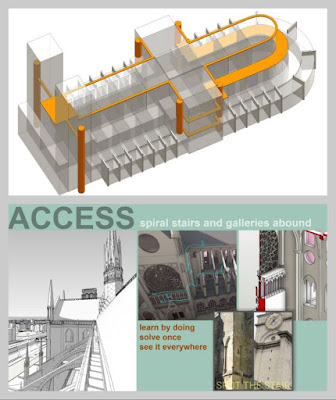 Another weekend. Need to fix up the model a bit ready for another VR export


Francois has been busy on the external stone balustrades so I load up a couple of new tyres. The one above the row of statues on the West Front is very tasty with a bit of chevron decoration looping over narrow arches. 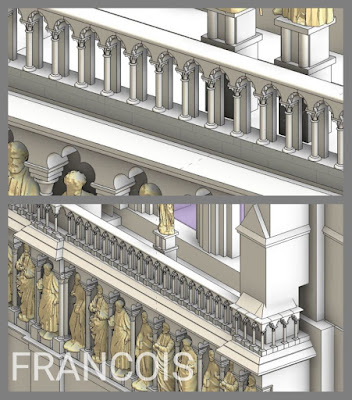 The second Railing type is for the outer sides of the chapels that run down either side of the nave. I had to move these back a bit in an attempt to avoid a gap between balustrade and buttress. I couldn’t move too far because the bottom rail not quite covering the wall below now. I suspect that both buttress and railing need further development. 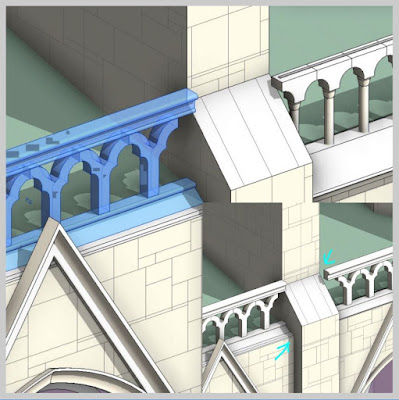 Next I dived into the triforium gallery, on either side of the nave at the upper level. I adjusted the levels on outside and inside walls so they match up, and the arches of the vaults fit snuggly over the wall hosted archway/window families. Next came little clusters of colonnettes against the wall to support the ribs coming in from 3 directions. 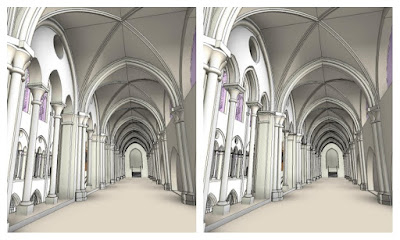 The apse. Some discussions on Slack with Alfredo, who later loads up a couple of updates to the vaults. Plenty still to do, but we are moving forward as a team. 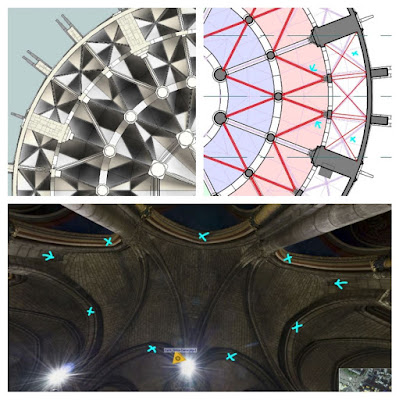 And I do my bit by adjusting the meeting point for the radial vaults, high above the altar. They meet in line with the columns, rather than at the true centre, which is offset, as discussed above. My placeholders for these vaults are clumsily hacked together, and I do hope that Alfredo will find time to upgrade them eventually, but for now they will have to do. 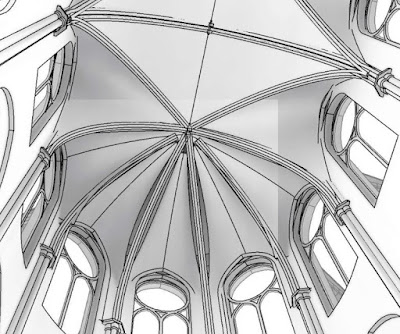 More discussions on Slack because the end points of Marcel’s roof timbers are popping through the ceiling. He explains how he extracted Z coordinates from the Leica TruView site, and I finally get to grips with this, during the week. There will need to be some vertical adjustments at some point, but I need a full weekend to tackle that.


It’s just a reminder of how BIM-centric historical research proceeds. Like design, it’s an iterative process. You jump in and bash out your first rough model. It’s full of half-truths and conflicts, but it helps you to understand the nature of the problems you have to solve to move it forward. 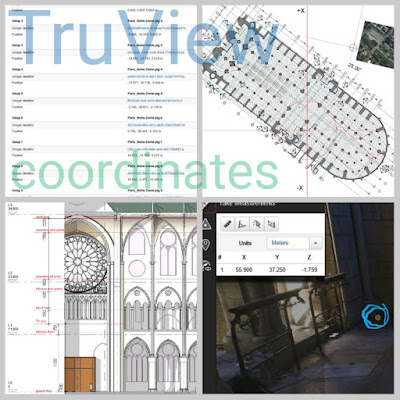 And so it goes on, Step by step, sometimes it may be one step back and two forwards. Sometimes it’s confusing and frustrating. But always it’s exciting and illuminating.


Closing slides from my open BIM talk. A nod to the global team, to software tools used and their interconnections. My take on the coming knowledge economy is that more and more people will be earning their way in life doing things we now regard a self-education, research, leisure pursuits, creative endeavour.


20 years from now, as automation and AI trim down the staffing levels needed for construction projects, the kind of work we are doing on Notre Dame may well become mainstream. 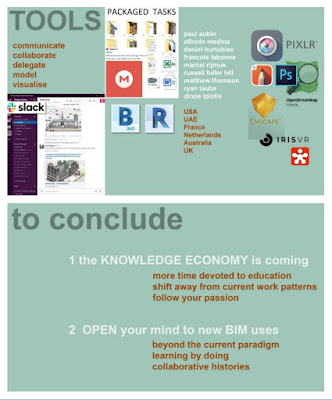