SQUATTING UNDER THE BRIDGE


The past is another country.

I remembered that phrase because it’s the title of a book that I haven’t read, a history of Zimbabwe.  I thought it was also a quote by someone famous, but that turns out to be “The past is a foreign country, they do things differently there.”  We could do with some of that wry wisdom amongst the current hysteria, but that’s not really my topic today.  The "famous person" turned out to be L.P Hartley, an oddly unfamiliar name.  First sentence of "The Go Between", his 1953 novel, made into a film in 1971, the year before he died.  Screenplay by Harold Pinter.


1973.  Find it on a map.  I was transitioning from “long haired student” to … something else, a leap in the dark.  I had decided during the course of my 3 year degree in … well it was architecture really but they decided to “broaden” the field, which is a bit like flattening the curve I suppose. So it was a flexi-degree at the School of Environmental Studies, aka the Bartlett School of Architecture. 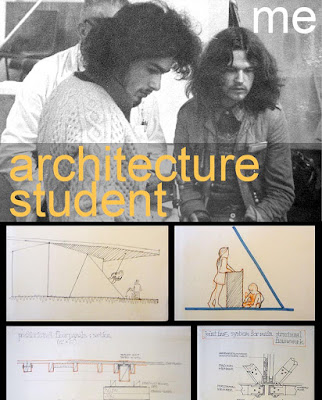 Anyway. I chose London because … well, London.  I had grown up in a coal-mining town “up north” and just wanted to go to the big smoke, where all the ground-breaking stuff was happening.  I had read some Le Corbusier, was aware of Archigram and had also stumbled across Jane Jacobs (The Life and Death of Great American Cities)  I was a quiet, somewhat intense teenager who had lived a sheltered existence in a religious household, but the mood of the sixties had deeply affected most of “My Generation” and I was beginning to see architecture as a mission to solve social problems.

Where today’s youth might decide to change the world “one tweet at a time”, I aspired to design totally new kinds of cities that would unleash fairness and creativity upon our species. 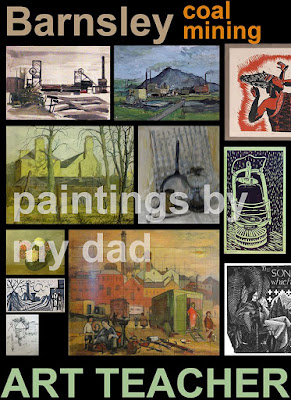 During my third year I had already decided to veer away from the expected career path.  Instead of designing a school, I set off on an exploration of the “free school movement”.  I saw myself as living out the dream of “self-directed, life-long learning”.  It sounds incredibly naïve in retrospect, but in a sense, I’m still doing that (in between paying my way and raising a family etc.)  So there was no clear transition from being a student to … not being a student.  I carried on going in to the architecture department fairly regularly and stirring up dissent.  I was living within walking distance and living on a shoestring, so why not?


All that year I had made a point of getting involved in real-world activities.  This included going to a “School Without Walls” conference in Scotland and volunteering at an adventure playground called “The Tufnell Park Playhouse”.  There was also a lot of guitar playing and drawing.  So it was important to me that the formal end date of my studies would be meaningless.  I was already “doing my thing” and wasn’t yet desperate to earn money. 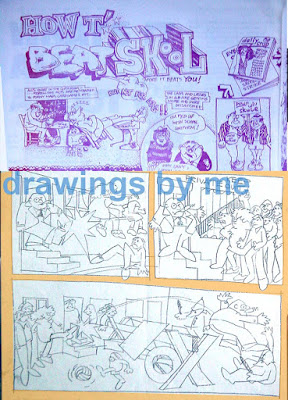 I had been living in a tiny box room in a basement apartment in North Gower Street, with a young family that had more-or-less adopted me.  Two young boys with whom I spent a lot of time: drawing, rough-housing, talking nonsense.  I had also run into a group of teenagers from North London who wanted to publish a subversive magazine called “Y-front”.  The theme was to be Anti-School and pro “learning by discovery”.  I new someone who had started something called “The Islington Free Press”, a printing press operating from a squatted corner shop.  One of the highlights of my last two years at grammar school was doing layout and illustrations for a new-style school magazine.

In my final year at university (UCL) I had been drawing cartoons and producing little subversive broadsheets.  When you are young and free of responsibilities, it’s very easy to believe that you can create a new and better world from scratch.  What could possibly go wrong?

There was an idea floating around that change would come from an alliance between students and workers.  Some people said that had started to happen in Paris in 1968.  I began to wonder if I needed to head back to the north of England, to rediscover my “working-class roots”.  It was a romantic notion, but it took root in my imagination and was expressed in notebooks that I kept at the time. 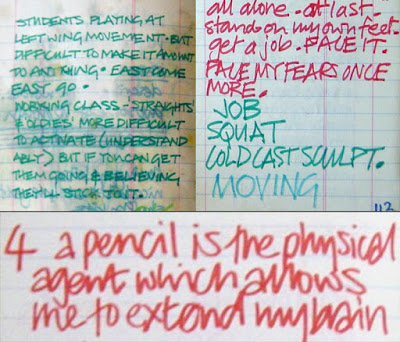 My squatting experience was a “dry run” at striking off in a new direction.  It was a bridge, a connecting ligament between my student experience in London, and the life of my 20s, working in the building trades in Sheffield.  It came about accidentally, but I already knew several people who lived in squats.  Why not give it a go?  There was plenty of empty property in Central London.

Redevelopment projects typically took several years to mature.  Developers would slowly buy up a city block, often boarding up empty houses and letting the area deteriorate so that it would be easier to obtain a demolition order.  We felt that we were doing something noble in putting these empty properties to use.  We saw the developers as “evil capitalists” and relished the opportunity to establish zones of freedom where we could create alternative social structures. 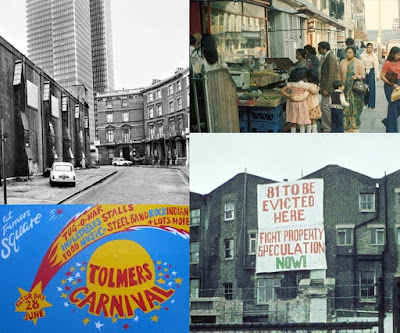 Looking through the old notebooks that I started to keep around this time, I was more interested in learning practical skills than fomenting revolution.  It was more of an internal awakening for me.  Healer, heal thyself, perhaps.

Self-reliance was a big item.  Learn to cook & sew. And of course, the life-long compulsion to play guitar and to draw.  It's all there in those little dog-eared pocket books. 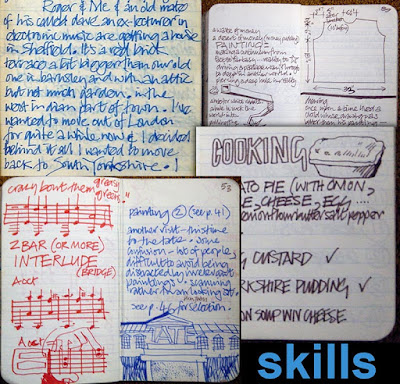 One day, a friend of mine from the university came up with a proposal.  She needed to move out of the place where she was living and had spotted a boarded-up shop around the corner from where I lived.  In the event, four of us banded together and broke into this old cobbler’s business one night.

It was a terrible choice in practical terms.  We thought we would be able to turn on the electricity and water.  Most squats did this.  There were printed sheets explaining how to go about it.  It didn’t work out, but by then we had fallen in love with the place, the romance of the shuttered shopfront and the atmosphere of bygone days.  We could walk to the public toilets in Euston Station, or take a bath in the basement flat where I had been staying.  Our squat was a bout half way between the two, and also very close to University College, where my friend was still a student. 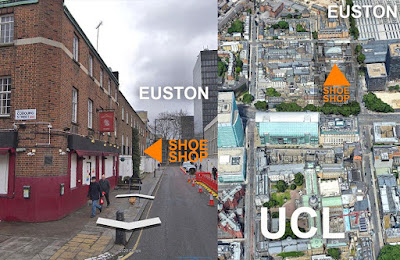 My plan to move north had taken shape.  I would move to Sheffield with two friends, one of whom had the money to buy a house, an old brick terrace.  We would do building work to earn a basic income.  I had neither skills nor experience, but my friends had both and seemed willing to help me to learn on the job.

Moving in to the “Quality New & Second-Hand Shoe Store” helped to acclimatize me to this idea of jumping in at the deep end, ditching my aspiring middle-class future and diving back into the working class seas out of which my father had crawled, (by way of the Second World War).  My parents were mystified of course, horrified probably, but we found each other again eventually. 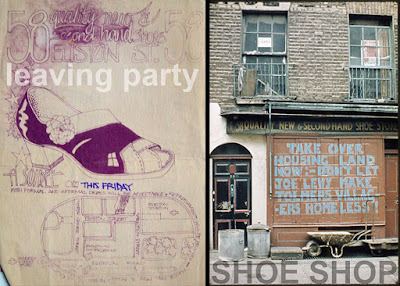 During those few months, preparing to move, I decided to earn some money. There was something of a building boom going on, and lots of work in architects’ offices. I started by going to an agency who farmed me out to the Telephone Exchanges section of the Ministry of Works.  I wonder how my life might have worked out if I had stayed on there.

The architect in charge took me under his wing and I think he was very disappointed when I moved on after just a few weeks.  One of the tutors in the architecture department had heard what I was doing and offered me a better opportunity with the practice where he was a partner.  But here again I was just biding time and saving money.  The arrogance of youth.  In retrospect I realise that several sympathetic adults tried to save me from a catastrophic decision.  And they were right to do so ... I think.  But strangely enough it all worked out for the best.

Some deep instinct inside of me realised that I was not ready to spend my youth sitting in architects' offices.  I needed to take a few lessons in the school of hard knocks first. 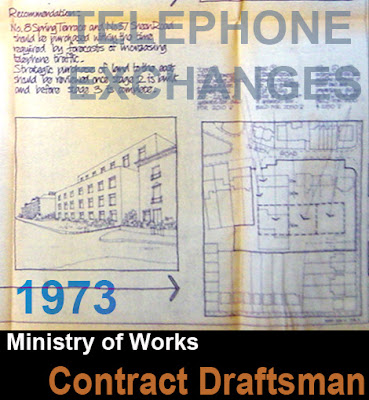 The area where I was squatting contained a decaying urban composition called Tolmers Square.  In the middle of the square was a church which had been converted into a cinema.  This had still been operating during my first year at university.  It was demolished.

Later on, after I moved to Sheffield, Tolmers Square became the focus for a vibrant community of squatters and tenants, including several Indian restaurants and shops.  This had been my locale for a couple of years already before I started squatting.  Not long before I moved "up north", we became aware that there were other squats in the area.

After I left the whole thing blossomed and we came down to visit a few times.  I still had several friends there, including Harry, an old guy from Manchester who had been sleeping on the streets and moved into the Shoe Shop with us for a while. 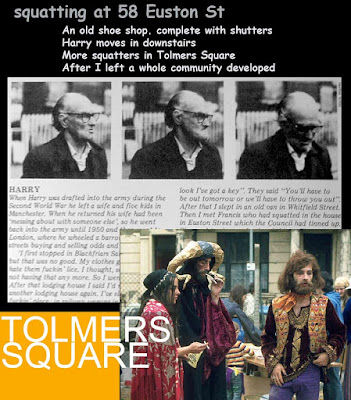 I think squatting was some kind of “rite of passage” for me, something I had to pass through to begin my journey to adult-hood.  It was a time when a maelstrom of ideas was swirling around in my brain, many of them wildly unrealistic.  Fortunately I was inclined to look inwards, and although I imagined society becoming transformed (via some kind of permanent revolution) into a utopia of creative anarchy … I thought in terms of building new things, rather than tearing down old ones.

It seemed to me that if we could build a better world in microcosm, the old “broken” one would gradually fade away.  As I approach 70 years old, I can only smile and shake my head at some of the notions I entertained in the enthusiasm of youth.

Thankfully, after crossing the bridge of squatting, I embarked on the ship of craft skills, learning to lay bricks and spending most of my 20s working with my hands.  This in turn provided the platform that allowed me to go to Zimbabwe as a building teacher.  But that chapter of my past is another continent altogether.