For a couple of years now I’ve been telling myself I need to do shorter posts and get them out twice a week.  More immediacy.  I get a bit frustrated by how long it takes to do some serious modelling, assemble the pictures, write the text, review & post ….

Problem is that long thoughtful posts are my trademark and I really enjoy having ten years worth of carefully documented explorations to look back upon.  Then last weekend I stumbled across a solution by accident. While working, share a single image and a couple of sentences directly to LinkedIn.  I think of it as my version of “Live Streaming”.  Give people a sense of what’s happening in real time when I start using my BIM pencil to look more carefully at one of the hundreds of buildings that have caught my attention over the years. 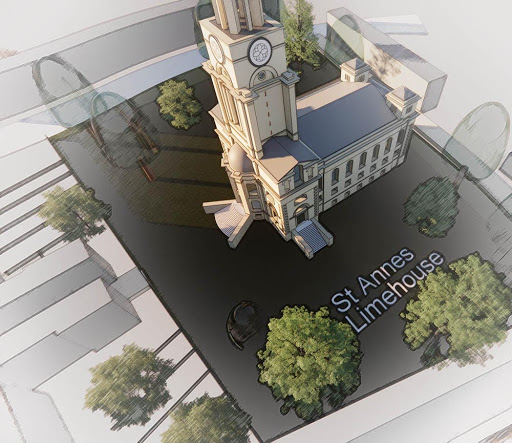 St Mary’s Limehouse by Nicholas Hawksmoor 1713.  I lived almost next door to this church for a few weeks some 40 years ago, and I did an “urban design study” of all six of Hawksmoor’s London churches … when was that?  2014 apparently.  So that must have been inspired by visiting my son who had recently moved into the area.

7000 views is not going to make me a celebrity, but it’s wonderful thing to have these global interactions.  More conversations over the past few days than I normally have.  I don’t want to get swamped by people wanting to chat on line, but the interactive nature of this process is absolutely crucial.  BIM is inherently collaborative.  That’s one of the reasons that it’s such a powerful research tool.  Far too much “art history” is dry, academic, text-focused stuff.  I really think that a bottom-up action-research programme could shake up the field and democratize our heritage.

That’s what the “BIM pencil” and “the Way We Build” are all about.  We live in the age of slogans, and those are my two big contributions to the genre. 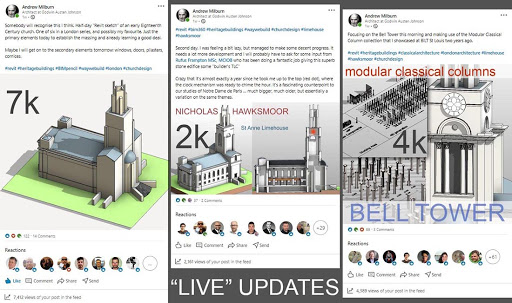 For me, BIM is an outgrowth of “drawing”, an activity with a very deep history which engages our subconscious brain and our physical bodies. That’s part of what the “BIM pencil” metaphor evokes, and it’s important to me that I include the activity of hand-sketching in my workflow.  You might say “that’s not BIM” but I might respond, “that’s a very narrow-minded view”.  At the moment I am mostly doing the hand sketching “in parallel” with my BIM work, but there is a back and forth, AND … I am super keen to see hand-sketching better integrated into the core of BIM. 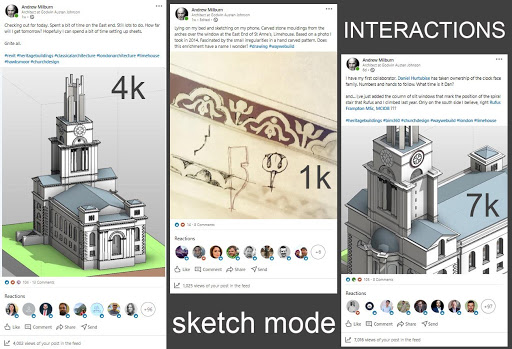 At the end of the first weekend, I produced a sheet set, which I really want to do more often.  That was my first time to drop it directly into LinkedIn.  Seems like a great way to share my work in the spirit of “lean & agile”.

This work on St Anne’s is only happening because I visited London a year ago and trekked around all six Hawksmoor churches, ending up with a tour of St Anne’s, graciously offered to me, via LinkedIn by Rufus Frampton.  He is one of several people from a building trades background with passion for built heritage who I had met online and who agreed to meet up during my visit.  Those friendships have continued to blossom, and become extremely important to me.  We cannot allow BIM to become trapped in a nerdy tech bubble.  It must belong to the entire range of activities that contribute to making buildings, from Stone Masons to Ironmongery manufacturers, to Surveyors. 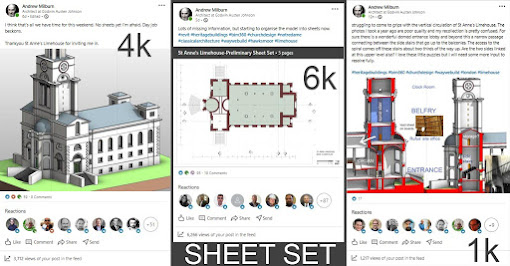 I was struck, during that visit, by the richness and variety of Stone Carving on display in the centre of London.  Beautiful creative studies that build upon ancient traditions, and offered building workers an opportunity for artistic expression.  I include one piece in the Art Deco style, even though it is rather stiff and flat compared to the others, because it seems like that was the last vestiges of original stone carving applied to new buildings.  We still have stone carvers, I met some on that visit, but their commissions are coming from the “heritage” industry, or the “art objects” industry.  That’s my impression, at least.

It makes me sad, but I don’t think there are any easy answers.  Industrialization is a wonderful thing.  It has dragged billions of people out of poverty.  BIM and off-site manufacture are going to play a crucial role in dragging the last 20% out of their poverty traps.

We also need to attend to quality of life. Obesity is a product of affluence.  Sitting down at a laptop all day as I often do, is not a great future for humanity. At some point we need to engage more humans in creative, manual work.  Ideally we should all balance our activities out with something like stone carving.  That’s why I have been trying to do some physical, sculptural work during this Covid hiatus … in a very small way. 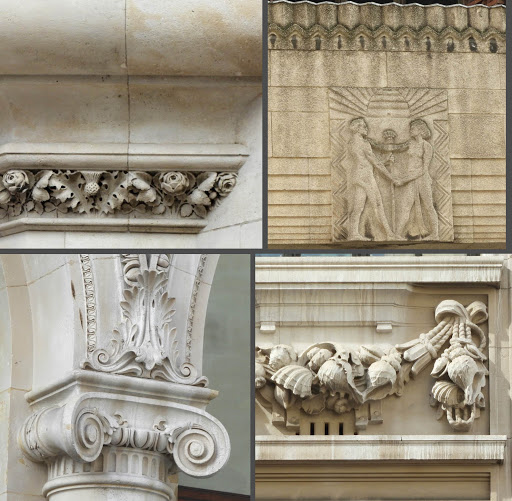 I went “up north” where I grew up and stayed with my cousin for a few days.  While there, I met up with a couple of master plasterers.  The great thing about social media is that once you have a couple of connections in a particular sphere, you start to see activity by others.  Over the past year I have learnt a lot about the techniques used in the plastering trade.  I have been fascinated since 2014 with the Corinthian capitals on the inside of St George, Bloomsbury. They are wonderfully delicate and sculptural.

I was pretty sure this was plaster work, but were the leaves separately cast and assembled?  I wasn’t sure, but by now I’m quite confident.  The approach is modular.  The materials used in plastering are almost unique in allowing solid castings to be stuck to a backing using essentially the same stuff. 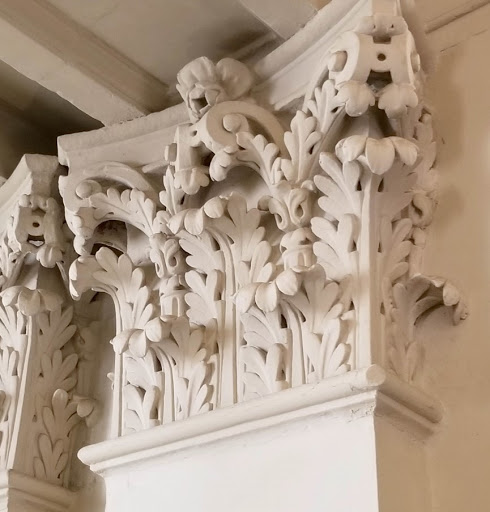 The entablature above those internal columns, contains enrichments (assembled in a similar modular way) that echo the ones I sketched on my phone a week ago, found on the outside of St Anne’s Limehouse, carved in stone … a very different kind of process.  There is one row of Egg & Dart plus three variations on Leaf & Dart ( I guess).

I have explore ways of representing these kids of elements with my BIM pencil.  There are computational load issues for sure.  We surely need ways to digitally connect low res and high res versions of details like this so that they can be seen withing the context of the model without blowing up our laptops, and  detailed out for close-up shots and for passing on to specialist trades.  I have yet to see a robust proposal for those kinds of phase shifts.

How can BIM workflows connect together the data between joinery details, complete building models, urban planning studies, whole city models.  Could we do bi-directional updates between these different scales in the same way that we do within a Revit model (for example) ? 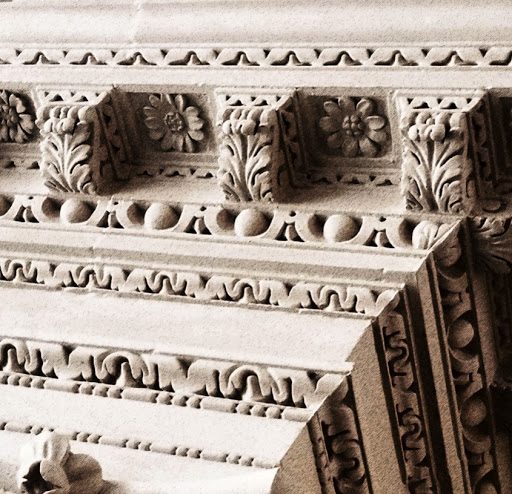 I started with an Enscape-derived image, and I will finish with another.  The site context is linked in from that urban context study that I did in 2014, so that stuff in the background is St George in the East with Christchurch Spitalfields beyond.  They are much closer here that in real life, but it creates quite an effective image, giving the impression of the East End of London 300 years ago … basically a string of villages along the Commercial Road with a mixture of market gardens and shipping related activity like rope making sloping down to the river. The docks came much later, in the 19th century as the Industrial Revolution came into full flow.  Up to that time the river itself was able to handle all the shipping, with wharves and warehouses up against the edge. 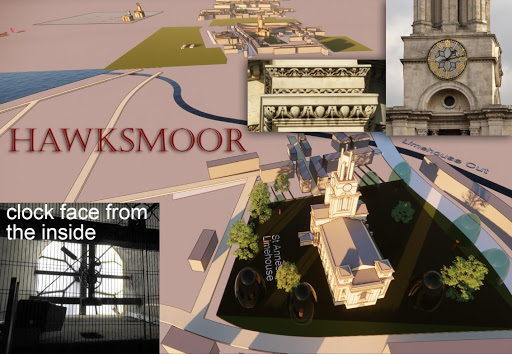