Can we use BIM to sketch ideas out, like we do with pencil and paper?  Quick sketches, exploratory diagrams, analytical studies?  That’s part of the motivation between my invented term “the BIM pencil”.

My second slogan. “the way we build” tries to capture the idea of using a wide range of tools and techniques to understand a crucial element of human culture.  We have been building shelters for tens of thousands of years.  Cities go back perhaps 10 thousand.  There is a rich story that can be told around those different ways of building.  I am a great believer in “learning by doing” and a proud tradition of architects who studied the glories of the past using the tools and methods of their profession. 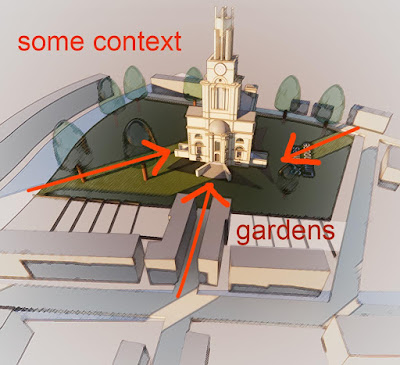 I read and I collect books. I take photographs and store them in digital archives that I have maintained for a couple of decades now.  But I also use this source material to sketch and model.  I puzzle things out for myself. 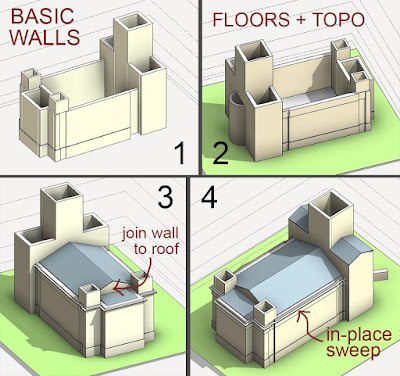 St Anne’s Limehouse is my current obsession.  I started about 3 weekends back and I’ve been sharing my progress on LinkedIn as mentioned in a previous post.  In this piece I want to describe my process, which is a question a couple of people have asked.  It’s not that different from the way I approach any Revit model.  Perhaps you will find it useful.

I start with Primary Elements: walls/floors/roofs.  Just roughing out the main masses.  Actually, I always add some grids at this stage.  They will probably evolve over time but it’s good to have something that extends through all levels that you can measure back to.  This early stage is very rewarding as you start to develop a memory-map of the building, as we all do with buildings we live in, or use regularly.

Secondary elements require loadable families.  Sometimes, (reluctantly), I opt for in-place modelling.  I learnt long ago that the system tool “Wall Sweep” doesn’t work well for classical cornices.  The problem comes at the junctions and wraparounds.  These always tend to lose their mitres as the walls that host them inevitably change.  So in-place sweeps are more stable in that regard. 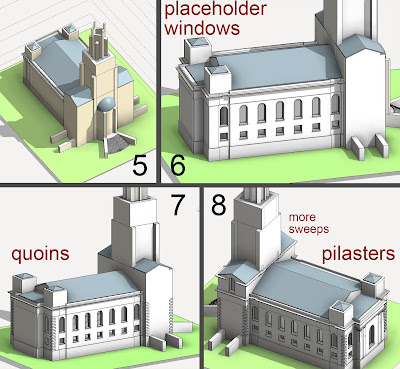 I have a library of starter families for windows and doors that I have built up over the years.  Some of them are all-purpose placeholder families that can stand in for any rectangular or round-headed window at an early stage.  To be replaced by more detailed representations later on.  St Anne’s is an interesting composition.  The articulation of the main volume is achieved by recessing the walls slightly in both plan and section.  This simple, stark approach to form is typical of Hawksmoor.

The quoins at major corners provide a linking element between the flat bands at the base and top of the walls, while also offering some finer scale detail.  I have a library of modular columns which allow me to produce something roughly the right size and style for most classical buildings.  We can do fine tuning later.

It’s a bit like painting.  Start by blocking out the main forms with a broad brush, and gradually build up the composition, layer by layer.  Don’t get hung up on the details.  They will come to the fore later on.  Keep everything in balance, at more or less the same level of development. 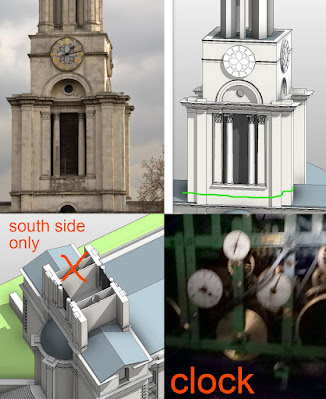 The tower at the West End is obviously a focus of attention and the most complex geometric form.  So it’s worth putting in a little effort to develop this next.  I haven’t spent much time on the top portion with its octagonal array of clustered columns. But we needed a clock, an elaborate cornice and a wall-hosted family for the belfry louvres with nested classical columns (square and round)

Are these Corinthian?  Mine are … but on closer inspection, Hawksmoor omits the scrolls and cauliculi.  Just the two rows of acanthus leaves topped by an abacus.  I think there’s a hint of egg & dart there, at least in the square versions.  But that’s detail, which I promised to ignore for now, so I just used my bog-standard Corinthian.  It can be updated later. 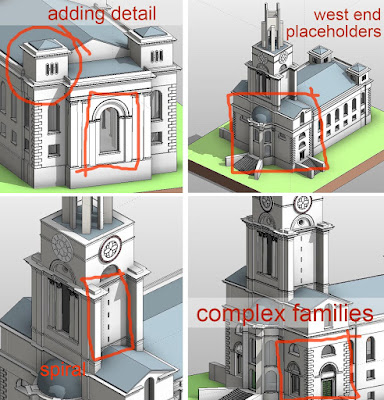 When Rufus showed me around a year ago, we ascended a spiral staircase within the thickness of the wall.  I was completely disoriented of course, but in hindsight I realise this stair is on the South side of the tower, marked by a vertical row of slit windows.

Then we get into a phase of tackling some more composite families, with nested pilasters, recesses,, mouldings.  I’m just doing enough to represent Hawksmoor’s scheme at this stage.  They will all need a second pass, and probably a third … if I ever get there.

How about some site context? 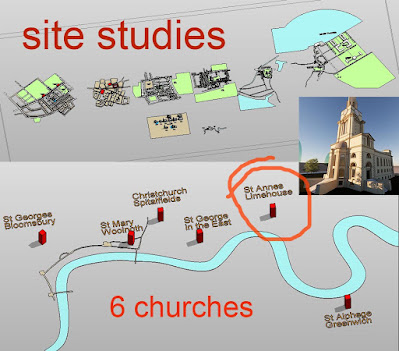 I did an urban study of Hawksmoor’s six churches some years ago, so I just linked this into my church file and moved it to the right position.  These buildings and their very different settings make such a wonderful group for comparison purposes.  I’m so glad that I got around to hunting them all out, and researching the likely nature of their surroundings 300 years ago.  I wonder if there is a Hawksmoor society?

The internal organization of the building needs to catch up a bit next.  There are stairs leading up to the upper galleries on both sides of the main entrance.  There is a linking passage on the ground floor, at right angles to the main axis, and I think another just above this.  I am looking to Rufus to give me some feedback on that, and maybe some dimensions also. 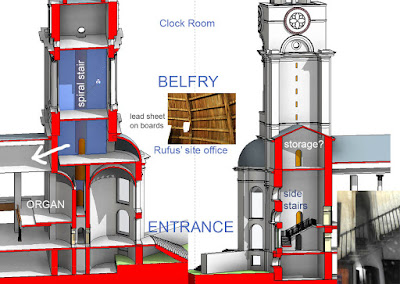 With that in mind, I prepared a study sheet with questions and assumptions for him to comment on.  The door to the spiral definitely leads off to the side, half way up a flight of steps, I remember that, and I have a blurry photo to confirm.  Just how the spiral relates to the cross passage at the upper level is pure conjecture.  There is definitely a window overlooking the circular entrance lobby, so I guess that is located on the upper passage.  But I’m sure there are subtleties that I’m missing.

The organ is backed by a giant niche, (or apse) that extends to ground floor level, forming another lobby space: half-round this time.  There is a timber screen separating this area from the nave, with half-glazed doors.  For the moment I have represented this using a curtain wall.

I love the way this timber work echoes the organ above, and spreads out horizontally, via the galleries to embrace the whole church.  Balance of materials.  Very nice. 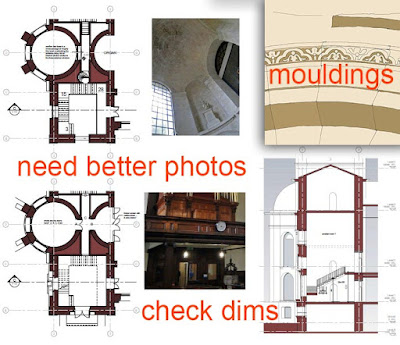