The basic premise of this blog is to use BIM tools (primarily Revit) to explore The Way We Build (TWWB).  At it's broadest, the idea of TWWB is to look into the soul of Homo Spapiens through the lens of our construction activity.  Since we are looking at ourselves, the lens becomes a mirror.  Through the looking glass of our grandest cities and our most humble campsites we take a journey into the social history of our species.

A blog is essentially a diary.  It follows in the footsteps of a grand tradition: the serialised diary of a newspaper columnist.  It lacks the discipline weekly deadlines, and strict column-inch targets, but it is available to all, an "open house".  You don't have to worm your way into an editors heart to write a blog, and you don't have to buy a newspaper to read one.  You do need internet access, so there is still an element of elitism, the haves and the have nots.  I am guessing that few of my readers are street vendors or subsistence farmers.

Last week Zach declared open season.  Let the hunting begin.  Unleash the parametric pumpkin carvers.  Last year I turned my pumpkin inside out to reveal a Doric column, and I told the story over the course of a week or so on this blog : an exercise in transparency perhaps.  This year I propose to open my heart/house a little earlier and to perform a different kind of inversion.  I'm not sure where this will lead, but my first impulse is to focus on the carving and perhaps to invert this process. 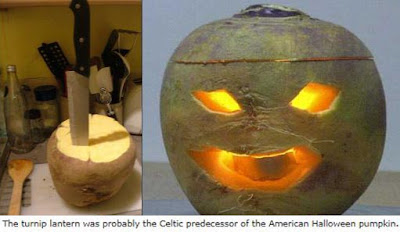 At halloween we profligates of the western world take a humble vegetable, carve it into the resemblance of a human head, and light it from within.  This forms part of an annual ritual of mock scaring.  We conjour up an ancient fear of witches and goblins in order to remind ourselves of the safety jacket we wear called "civilisation".  Carving the vegetable represents taming nature.  We are in charge, tree spirits no longer pose a threat as we wander through the forest stealing their fruit. 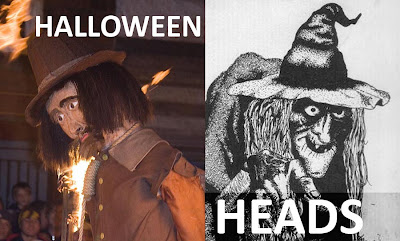 As a boy growing up in the industrial north of England, I never saw a real pumpkin.  We made our lanterns as part of the build up to Bonfire Night, and we used turnips.  This made the carving process somewhat harder, because turnips are roots, they have no soft pulpy mass of seeds at their centre.  They are hard and solid until cooked.  This story, and the reference to civilisation as "nature taming" help me to open the door a little wider.  Zach has already eased it a little on its hinges by naming the genus Cucurbita as fair game.  As it happens, the pumpkin is not a species, but rather an imprecise descriptive term.  There is no hard and fast line separating pumpkin from squash, gourd or marrow.  The boundaries are blurred. 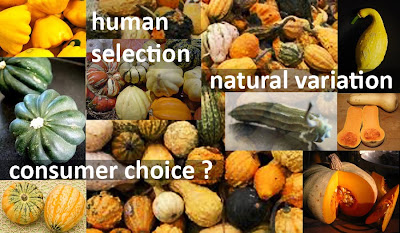 From species to genus to family to order, we map out the tree of life.  It is a work in progress, but the more we learn, the more we realise how marginal we are.  The boy who carved pumpkins believed in plants, animals and one or two marginal items like mushrooms and seaweed.  As a grey haired old man, I have discovered that animals & plants are the marginal kingdoms, late offshoots from the majestic "tree" that has been branching out from bacterial roots for more than 3 billion years.  But let's confine ourselves to plants.

Green plants (the sub-kingdom Chlorobionta) include green algae, seaweeds and land plants.  We will restrict ourselve to land plants (Embryophytes) which include ferns, mosses, liverworts & seed plants (Spermatopsids).  Narrowing down to seed plants, we recognise  conifers, cycads, Ginkgos & Flowering Plants (Angiosperms).  Let's home in on the flowers.  Despite being such an offshoot of an offshoot of an offshoot, the flowering plants have come to dominate the world.  They have become wildly successful in the world we inhabit today.  Like ourselves they have spread into almost every habitat.  (exceptions include the north pole & the top of mount everest)

Flowering plants include water lilies, magnolia & eudicots.  We want the Eudicots.  They have been around for about 125 million years, so dinosaurs missed out.  They account for 70% of current flowering plant species.  This is where we find the parent groups for Turnips, Pumpkins, Capsicum, Okra ... stuff we usually call vegetables.  I've gone through all this taxonomy, partly to prove that I am actually selecting quite a narrow group, and partly to draw a parallel. 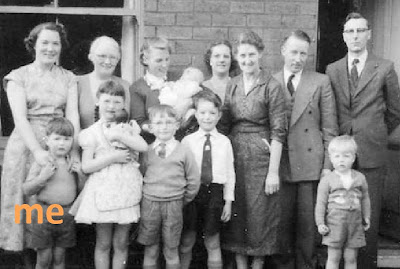 In Revit everything is a family.  That's one of the main unifying concepts.  We have a heirarchy that goes Category, Family, Type, Instance.  Linaeus would have been proud.  BIM uses a biological metaphor to help us to understand its underlying structure.  The templates we use to create our families have certain behaviours hardwired into their DNA.  Some families are parasites.  They can't exist without a host.  Evolutionary metaphors abound. 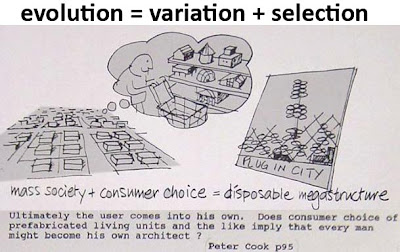 There is another level of metaphor that I wish to explore.  Buildings are more like plants than animals.  Plants have foundations, they are rooted into the soil.  They group together to form environments within which animals can do their thing.  Manhattan is a towering forest of giant redwoods, the City of London a grove of ancient oaks.  Sometimes the connection is more literal.  A mountain village in Oman, built around a natural oasis; the ancient town of Catal Huyuk planted amongst stands of wild cereals in a gesture that prefigures agricultural practices yet to come. 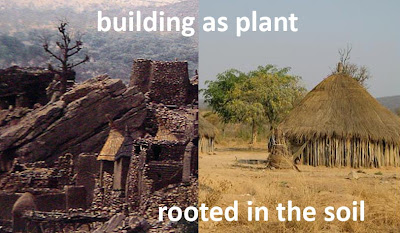 So much for the grand philosophy.  I aim to build myself some vegetables.  They will include pumpins, marrows, turnips & ladies fingers.  This will take me into the realm of organic forms and random variation.  From this radiation of life forms we may need to do some population culling.  And from this vegetable harvest, we aim to build our halloween man, our Guido Fawkes, our Witch of the Wild Woods.  Hey presto, an inverted Jack O'Lantern ... Maybe.  Just kicking ideas around really. 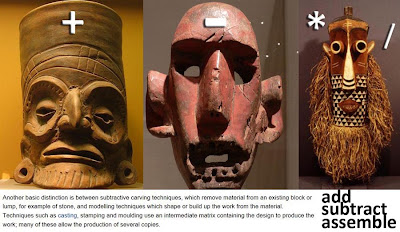