I have changed the name of this post because it is getting a suspicious number of hits.  I suspect the word "style" in the title was responsible for this.  Apologies to the late Lonnie Donegan for having to remove the reference to his classic song. (putting on the ... agony)

I started to think about stylisation.  So far I've been focussing quite a bit on how to make things appear more natural, more "real" I suppose.  But every representation, every drawing, every model is an abstraction of some kind.  It's a question of being clear about those aspects of reality that you wish to capture, and those that you wish to set aside for the present.  Kind of like visibility graphics but on a deeper philosophical level.

Many artists have used a highly stylised mode in order to focus their attention on a particular aspect of reality that they wish to explore.  Right now I am thinking about raspberries, but also about repetition in general, especially in the world of plants.  I will start by making a "multi-berry": an abstraction from the idea of a raspberry/blackberry/bunch of grapes.

The first attempt was stylised into a simple cone, but still highlighting the effect of random variation, within a repeated pattern.  This is my first time to use the Randomizer add in from "dp stuff" and I was duly impressed.  Works within a massing family and is very intuitive.  Simple but effective, and it's free.  Thankyou so much !!!

The sphere is a curtain panel.  This turned out to be quite interesting.  I remembered that I had a folder with platonic solids in it.  Perhaps I should have used this for the cone also.  Anyway I nested the sphere from this folder into a curtain panel template, and linked its radius to a reporting parameter with a simple formula. 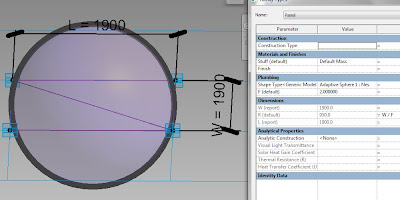 The sphere is centred on a diagonal, and it's radius is a proportional to one of the sides. (chosen at random)  Since I am going to vary this radius in a randomized way, any side will do really. (no need to go to all the trouble of adding up all the sides and dividing by 4) 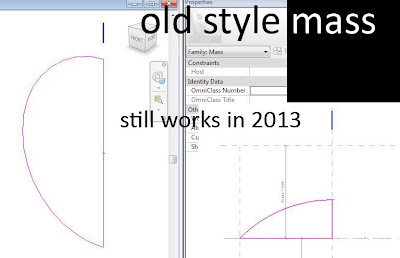 The interesting part came when I started to edit the sphere.  It's obviously a pre-2010 family and amazingly enough it still edits in the old fashioned way.  Now the point-based world of conceptual massing is truly wonderful, but for some shapes the crude simplicity of "sketch mode" is a welcome relief.  I've a feeling that Luke Johnson pointed this out long ago, but I enjoyed the act of rediscovery.

So I edited the sphere into a disc.  First try place it at right angles to the intended orientation, which might be useful to someone perhaps.

Thinking a little harder, I got it right.  And went on to make a wavy wall a la Bullring in Birmingham, which I have to walk through when I go to see my mum, fading away in her nursing home.  This seemed like a timely reminder that playing with fruit and vegetables is intended to generate techniques which will be useful to me as an architect.  It's like turning a painting upside down, going for a walk in the park, and coming back to see it with fresh eyes.

This is all happening at 3am by the way.  Just woke up and decided to have a go.  So I started thinking about architecture that is very organic, and began to browse through the Art Nouveau section of my laptop archives. Strangely enough Zach did a wonderful Gaudi post later that same day.  He has always been my favourite, but this time I was attracted to Guimard & Horta, especially their handling of wrought iron and metal castings.

I came up with this door handle by Victor.  Wonderful shape.  Three point fixing.  Integrated keyhole.  Can I make this as a scaleable adaptive rig, using some of the tricks I have been developing ?  At this point I went back to bed, but late in the afternoon, shortly before spotting Zach's post, I had a go.

My aim was to place 3 points on a flat surface and have Revit generate a stylised version of Victor's handle.  Not going for total fidelity, just want to capture the essence of this free-flowing form.   It seemed natural to make a tetrahedron with a height parameter.

Place 3 points, make adaptive, join them in pairs.  Host a point on the mid-point of one side, join to the opposite vertex.  Host a point on the resulting line and make all it's reference planes visible.  Set the horizontal plane to current.  Place another point on the point.  Ignore the warning and give it an offset value.  Parameterise this as H for height. 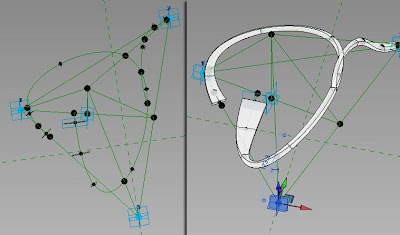 Some more joining up and there is my tetrahedron.  I could use some reporting parameters to make the height scale up automatically depending on how widely I space my 3 placement points, but I was impatient to proceed.

I just followed my instincts and gradually figured out how to place points and connect up the dots to create my 2 curves.

Then it was just a question of hosting points & profiles using the copy/rehost procedure I have been boring you with recently. (ctrl/drag)   I chose a simple rectangle with instance parameters.  Had to rotate some of the points to compensate for twist.  Did that by trial and error.

I'm happy with the result.  No need to take it further for the moment.  There is a nack to creating these scaleable/adaptive rigs and it improves with practice.  So I can go back to my vegetable garden with confidence that it is time well spent. 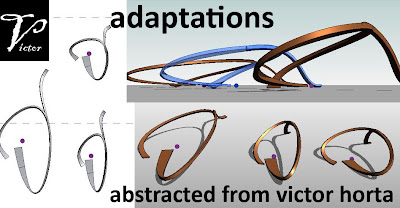