Question from Stefan: why are mass floors greyed out when a generic model adaptive family is loaded ?  I had to check this one out quickly.  It seems to me that there are subtle differences at work.

We have lots of family templates available and many slight differences in the way they work.  In this case we are looking at just 3 of them:

Now the first 2 partake in some of the nature of the third (a full-Monty Mass family), but not all.  They can take wall-by-face, roof-by-face etc.  But they won't create mass floors.  Mass floors are a subcategory of "Mass".  So it would be rather odd if they existed within another category.  How would you hide them, or assign materials to them ?

In my quick experiment I made three cylinders, one from each of the templates mentioned above.  All of them accept hosted system families (walls, roofs, curtain systems)  BUT ... only the Mass can utilise the automatic Mass Floors by level feature.  The tool appears on the ribbon, as if to let you know that this is something half-way to being a mass, but it's greyed out.  You can't actually use it. 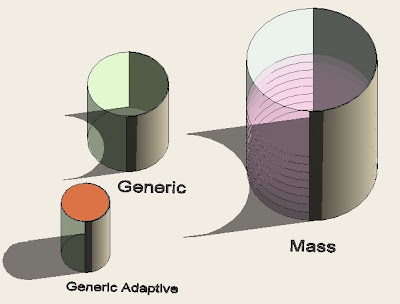 You can see where the confusion arises.  Generic models seem to behave like Mass families, but only up to a point.  With Generic Model Adaptive it's even more "understandable" because you are actually working in the Conceptual Massing Environment when making this type of family, rather than conventional family editor.  So you might expect Mass behaviour.  But apparently this does not extend to mass floors.

I stand to be corrected, but I think that's how it is.  So to Stefan: you need to start from the Conceptual Mass template if you want to use mass floors.

But what if you want to use adaptive points & repeaters and all that clever stuff ?  Well it seems that if you nest a Generic Model within a Mass then it will take mass floors.  So all your hard work is not lost, just start a new Mass family, load your GMA into it and then load the Mass into your project. 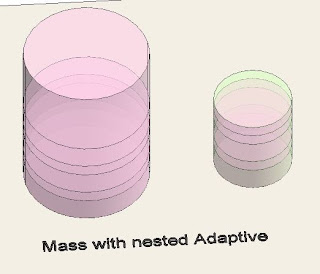 Hope this helps and I am open to correction from the likes of Kelvin & Alfredo who may well have gone into this in more depth.