I am trying very hard to bring my Casa del Fascio to an uploadable status. Part of the struggle relates to the dimensions.  Have I got them right ?  Does it matter ?  With such a rigorously geometrical design it somehow seems to.

Let's start from first principles.  Take an idealised single office.  A 4m cube will do nicely.  Lay this out in a perfect square, basically a chess-board. 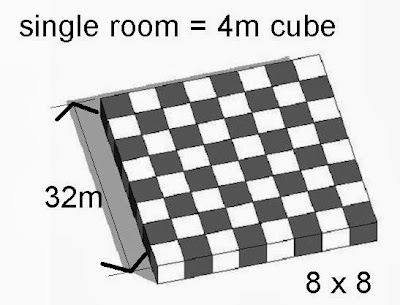 Stack this up 4 stories high and we have a perfect half-cube.  Obviously the rooms in the middle are starved of light and air, so we hollow out or mass.  The result is clearly related to the Italian Palazzo form. 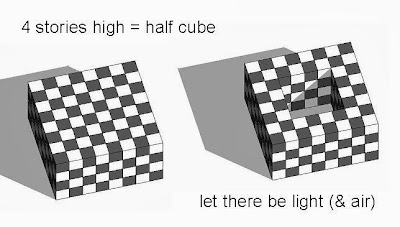 But a renaissance palace would never have a grid line in the centre.  There would always be an uneven number of bays.  So let's adjust the module horizontally to 4.6m square so we can fit a 7x7 array on our site.  Then we can do a bit more squeezing to create a narrower bay as a circulation spine, with slightly larger offices along that side. 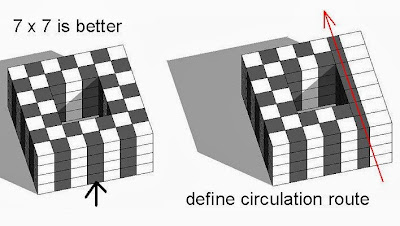 Next we set back the rest of the facade to make room for open balconies.  This will open up the building, create a layered transparency and also express the structural frame.
We can further enhance this effect by cutting out notches at the top and bottom, marking the position of the central void, and defining the entrance zone.  Let's also locate the vertical circulation at either end of the main spine. 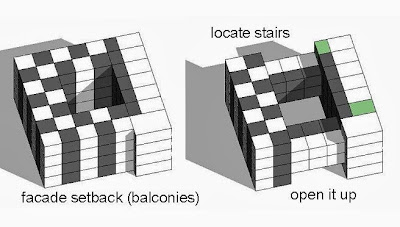 Add a small balcony recess at top left and transform the central void into an enclosed, top-lit atrium, two stories high, with open galleries on 3 sides.  Again this is the palace courtyard, reinterpreted in terms of a modern, hygeinic office block. 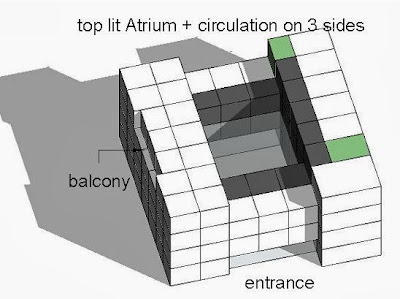 To close the open ends of the galleries we place large meeting rooms in the middle of the left hand wing.  Then locate the washrooms, one stack next to the main stair and a smaller stack at the back close to the meeting rooms. 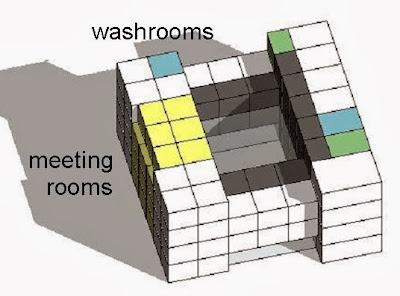 That's the basic scheme.  It started with a 4m cube, perfectly regular, and adapted itself to the various requirements of the brief in an apparently logical manner.  In some ways it is a very cold and formal composition, but from the inside it is also very open.  You can always relate yourself to the central space, which was also intended to house gatherings of the party faithful.  We know with hindsight that the party would turn into a monster, but can we blame Terragni for daring to dream otherwise ? 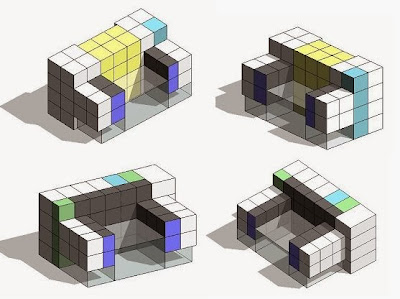 The dreams of my youth did not turn out so disastrously, but perhaps they were equally unrealistic.  Maybe I was lucky to grow up in an age of "peace & love" rather than the era of "nationalist zeal"

But back to the building.  Before I understood the internal organisation, I was dazzled by the apparent complexity of the 4 elevations; impressed by the assymetry generated within such a regular platonic solid.  But once you follow the logic of the chess-board moves, the elevations can be seen as expressions of ... 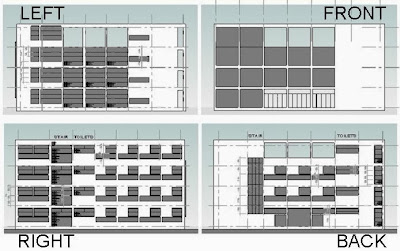 For my presentation in Auckland I developed a dimensional scheme based on multiples of 200mm, taking that to be the size of a glass block, using a column size of 400x400, a floor to floor height of 4200.  It seemed to be simple and logical, but the finer details refused to drop neatly into place. 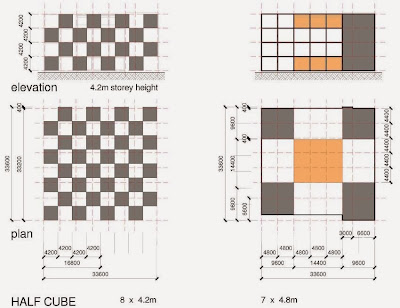 So last weekend I hunted through my reference material, hoping for more clues.  There is an original floor plan by Terragni himself, but the dimensions are difficult to read.  The width of the facade appears to be 33250, edge to edge.  But was this the final version ?  Was it built to these dimensions ? 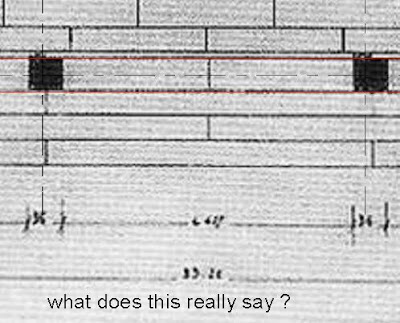 An Architect's Journal article from 2007 contains a claim that I have come across before, that the building his a perfect half-cube 33200 x 16600.  But several sources also claim that the width is slightly greater than the depth. 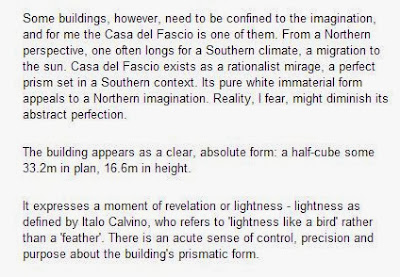 In the end I decided to shrink my model, not an easy task I might add and it consumed the entire weekend.  Sadly I have still not fully resolved the challenge of the glass-brick module and how to make this match the numbers of units clearly visible on various photographs.  But I do now have a model with a floor to floor height of exactly 4m and an edge to edge width of 33200 (give or take 50mm) 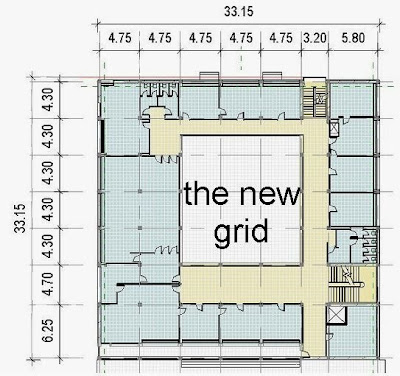 Along the way I developed my window families a little further and came to some interesting conclusions.  The internal partitions meet the columns in a rather interesting way. 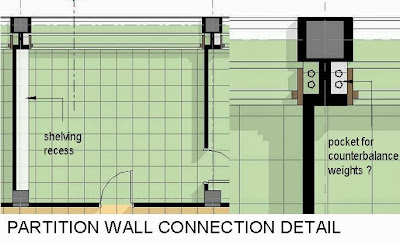 I thought this was just a way of stabilising them and of disguising the position of the internal colums, but this weekend I realised that it also relates to the boxing out of the windows. 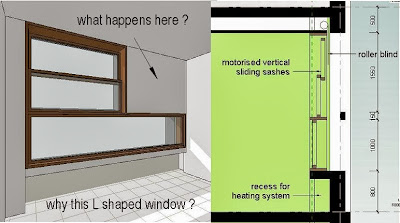 Looking more closely at my reference material I realised that the windows are fixed behind the wall.  They sit inside the room, within the slot created by that intriguing partition wall detail.  They are very large sliding sash windows, motorised versions.  Many are also L shaped.  The resulting facade is a series of layers: recesses, cutouts, external blinds,  3 bands of windows stepping back. 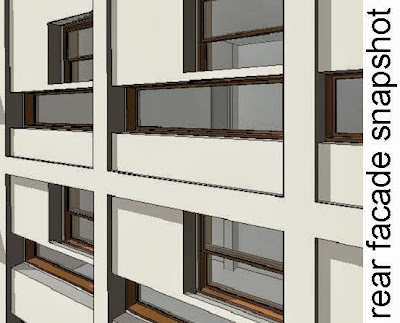 I used to work with sash windows in old terraced houses in the north of England.  There are wooden boxes on either side to house counterweights. 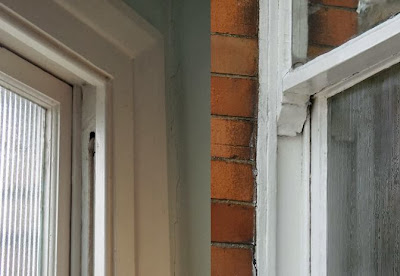 Removable flaps in the sides to access the weights, internal staff beads that can be prised off for maintenance purposes.  But that's another post. 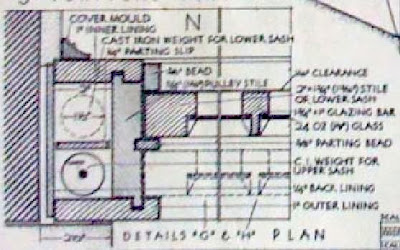 For now I have cropped out a portion of the rear facade from my work in progress model and uploaded it to Autodesk 360. 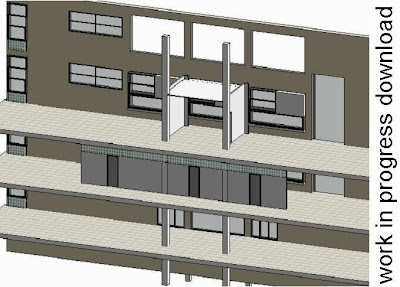