This post records my first fumbling attempts to design a monumental building that is recognisably both a pumpkin and a homage to Etienne Boullee. I started with a circle in a square, somewhat reminiscent of Wright's Prairie Planters (although this work was done in late March, long before I visited Chicago.)  The building purports to be a "Museum of Domesticated Species and Urban Settlement" aka MUDSUS or more popularly, "The Desert Pumpkin"

The square is clearly too high, so I looked for ways to drop it while keeping the whole family parametric & scalable.  At this stage we are trying to avoid jumping into Point World, so it's a bog-standard Generic Model family.  I'm using simple formulae and equalisation constraints to tie everything back to a module.   The module is the width of the square, "W".  It's an instance parameter with a default value of 3m.  So the unscaled version would pretty much fill your living room. 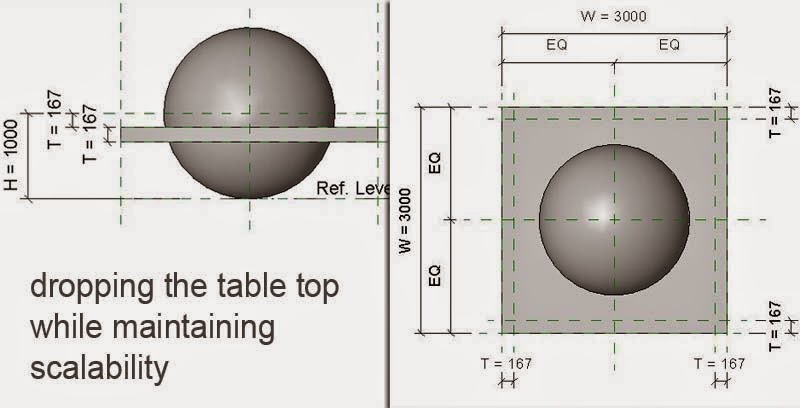 The thickness of the square "table top" is controlled by parameter "T", so why not make repeated use of that value.  I'm going to need some stout legs at the corners.  These can contain lifts to take people to the top of the table (Alice in Wonderland once more, "drink me") There will be gardens up there, and also down below.  Species that like the sun and species that prefer the shade. 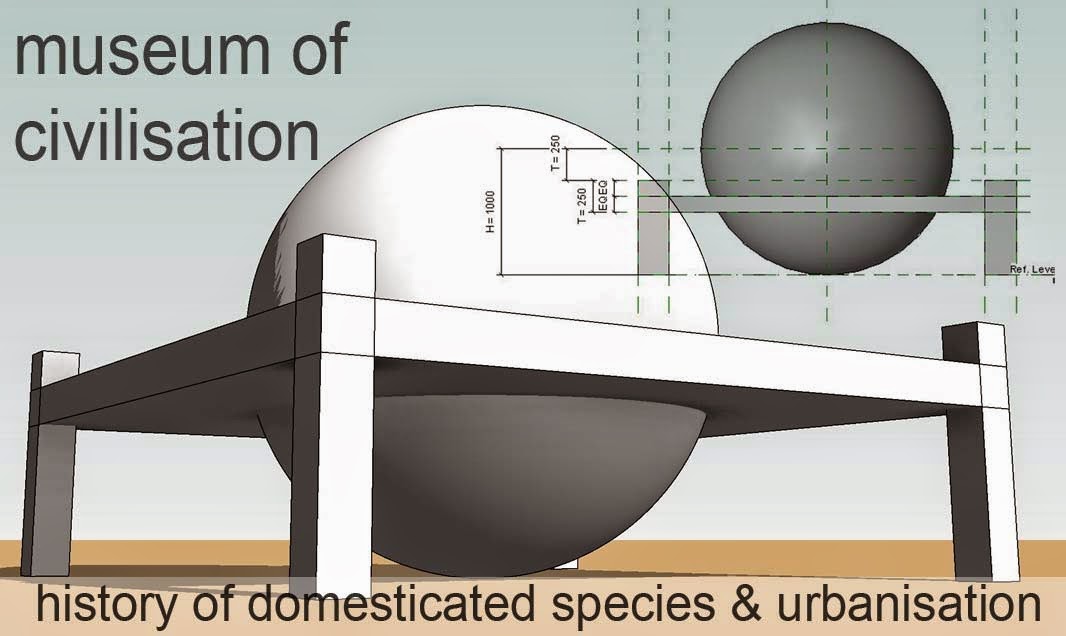 I see this building as some kind of museum/research institute/theme park that celebrates the domestication of plants and animals and the role of the Middle East as cradle of civilisation.  I need some kind of functional programme to guide my efforts and that seems as good as any.  Links back to my previous submissions too, all that exploration of the vegetable and animal kingdoms.

My first camera view suggested I needed to drop the table even further down and maybe run a sweep around the edge.  It's a monstrous span between the corners so I need some intermediate support.  The neoclassical answer would be an array of giant columns, so let's give that a try.  Shades of Schinkel's Altes Museum in Berlin.  Seems a reasonable precedent.  The neoclassicists were not averse to an occasional Egyptian flourish, so I decided that would be more appropriate to the region than Doric or Tuscan.

To support the sphere at it's base I used a cross.  Even closer to Wright, how wierd is that ?  I only just noticed that now.  Then I had the idea of bringing a monorail into the desert, and extension of Dubai's Metro system perhaps.  That would be a tremendous tourist experience, flying over the dunes in a high speed train and finally docking at the giant pumpkin museum in the middle of the desert. 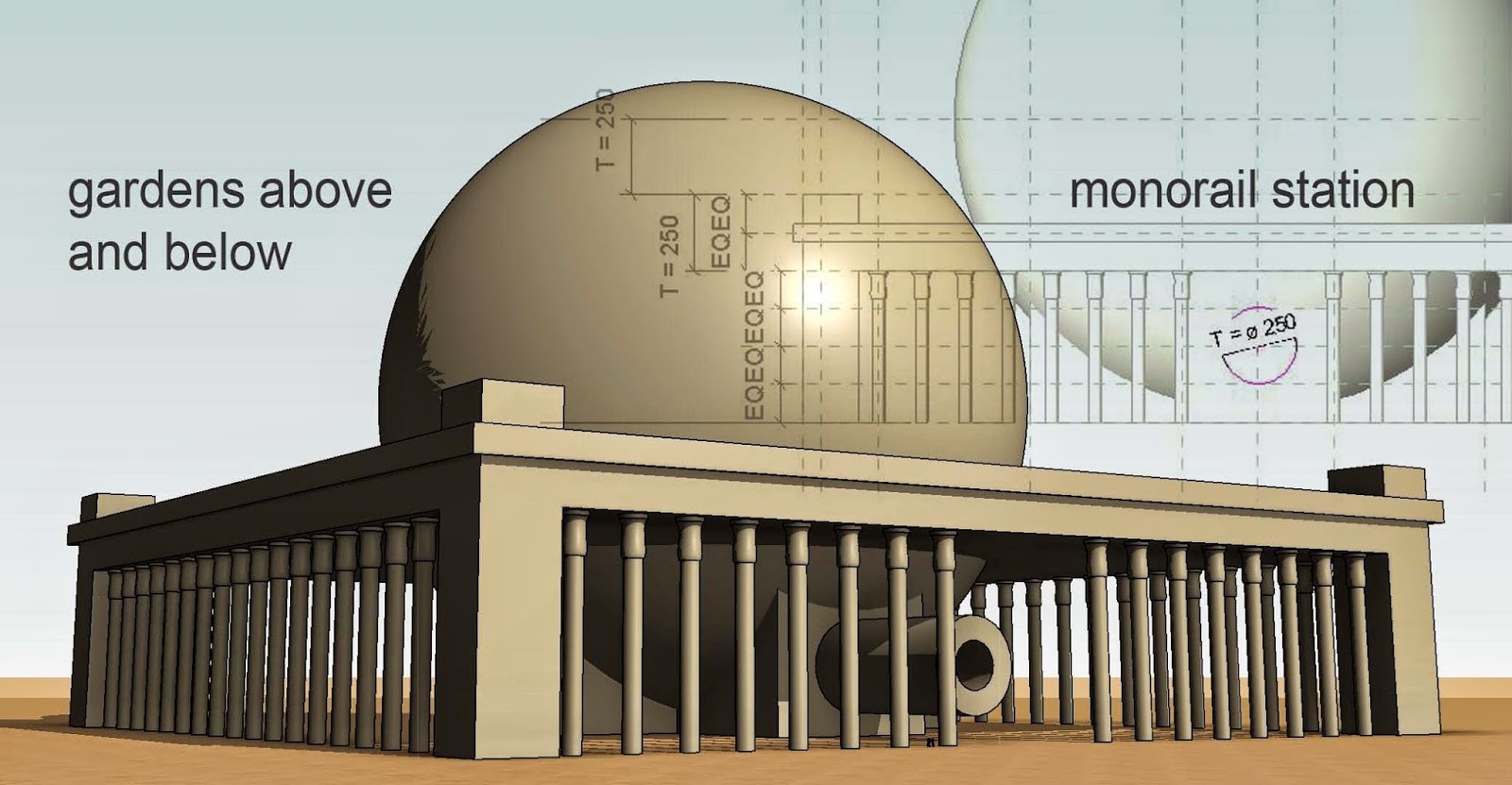 So I have this hollow cylinder to represent a station, and a gap in the array of columns to let the trains pass through.  So far so good, and I'm starting to think about the shaded interior also. 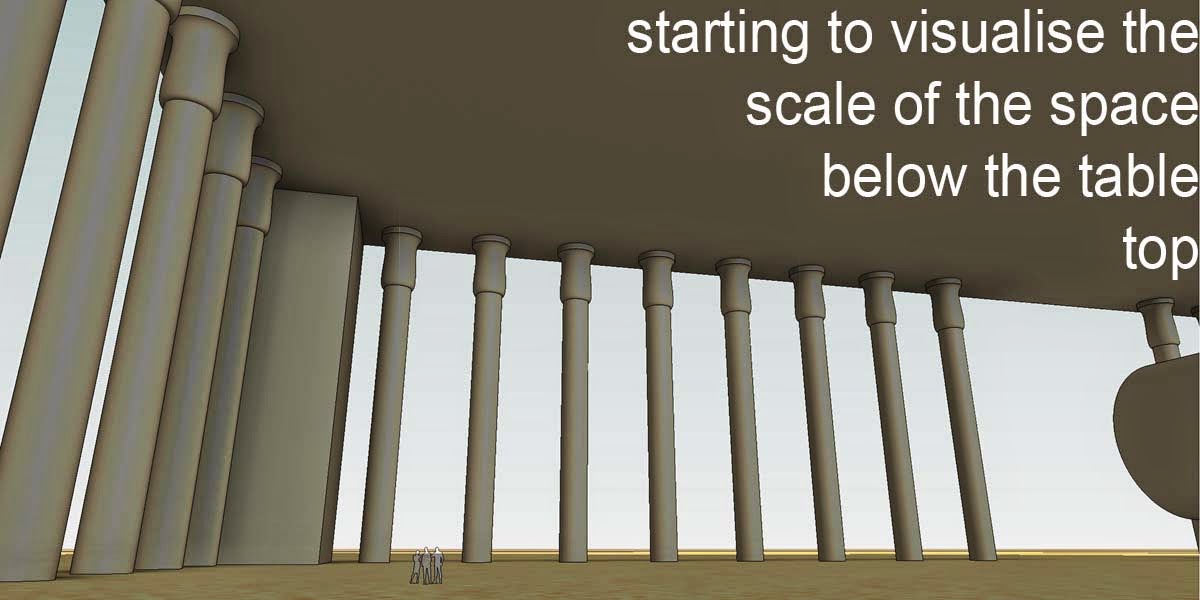 Maybe we need some reflecting pools at ground level. 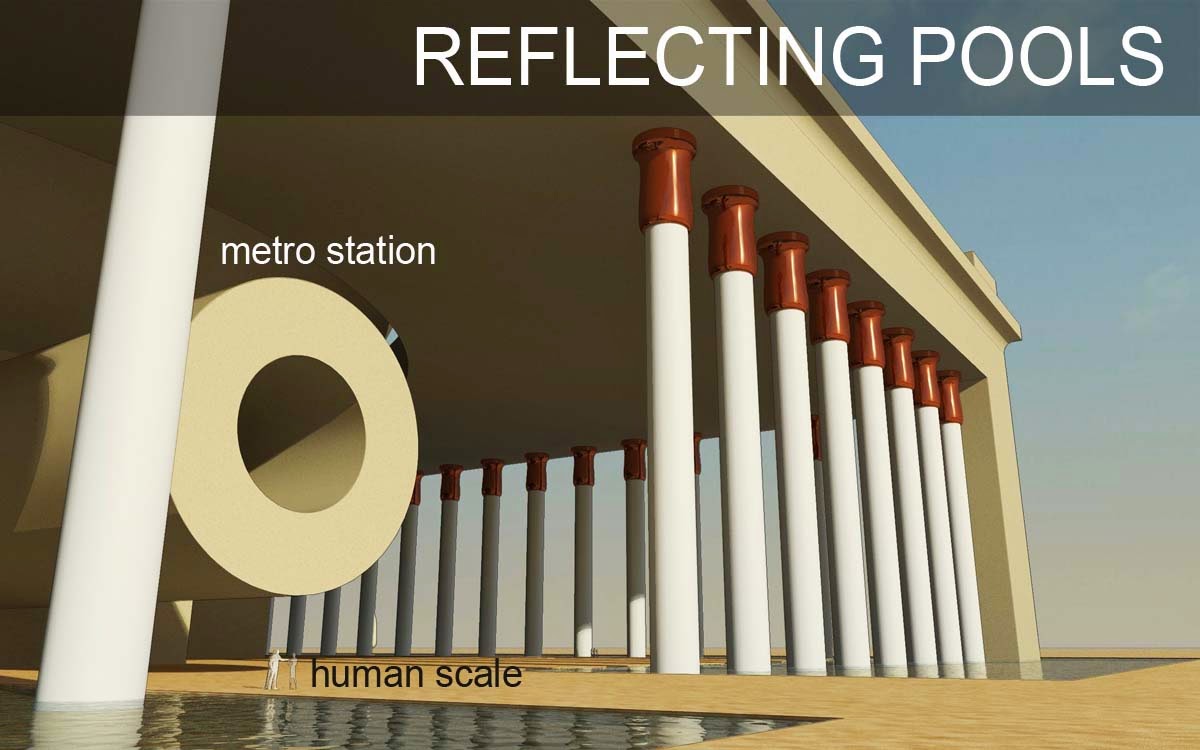 I'm feeling pretty chuffed at this point,  The whole family still scales nicely and I'm getting some promising images.  The original family is based on a 3 metre module 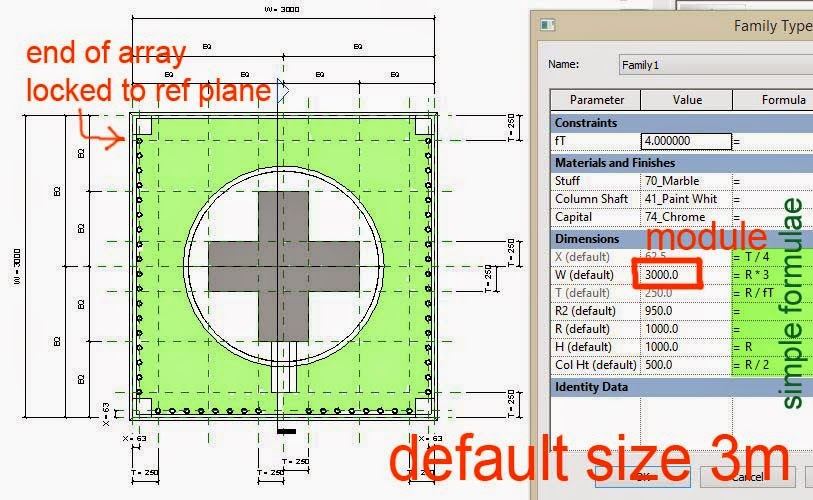 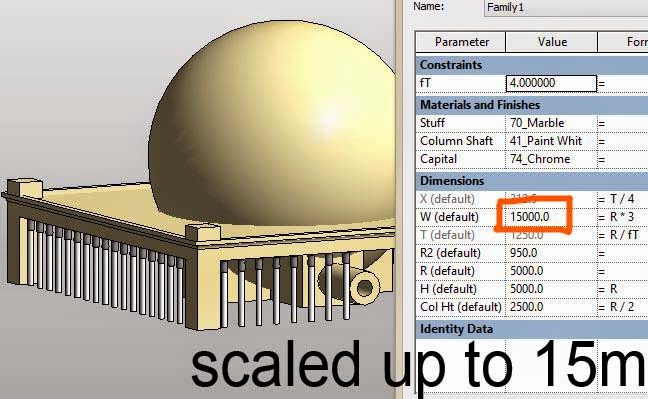 But there's one nagging doubt.  Is a sphere acceptable ?  First of all it's a bit too close to the original Cenotaph to Newton.  Secondly, this is supposed to be pumpkin carving.  So what if I bring in a parametric pumpkin ? 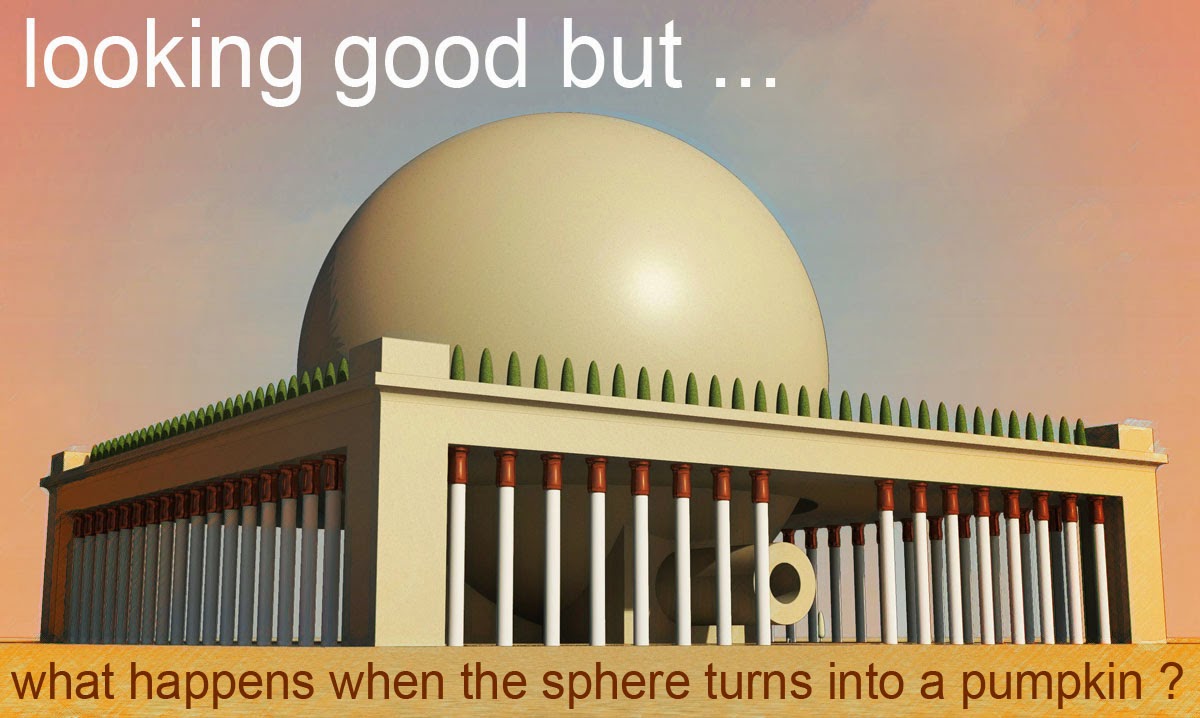 There's no way I'm going to be able to do this in vanilla, so I have to rebuild from scratch in Point World.  I decide to use a box rig.  Don't need so many formulae and equalisation constraints now.  Normalise Curve Parameters will handle most of that. 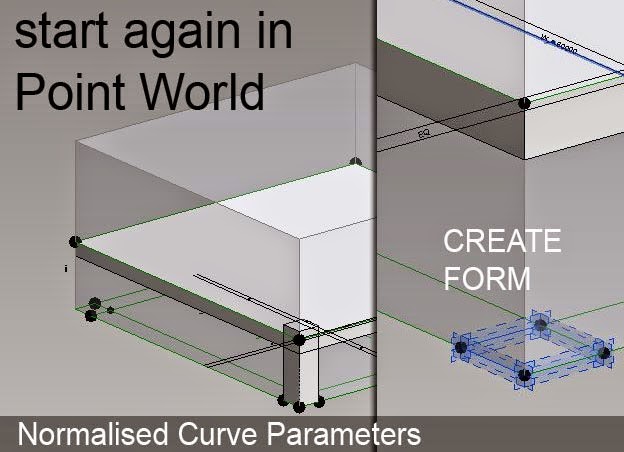 The pumpkin itself is adapted from last year's submission.  Despite going way off the rails, I did in fact make a highly parameteric pumpkin, which featured in the background of my images in various guises. 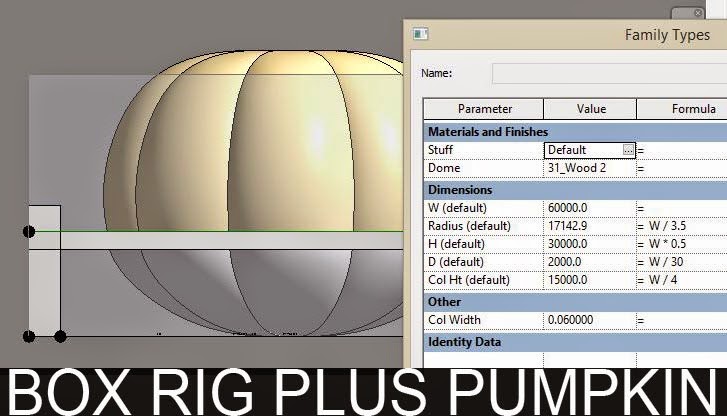 Actually it's 2 half-pumpkins, or "Pump-Domes". Each Pump-Dome is made of segments in a circular repeater.  You can control the angle of the segments and this is linked back to the repeater.  Basically the angle is 360/no of segments. 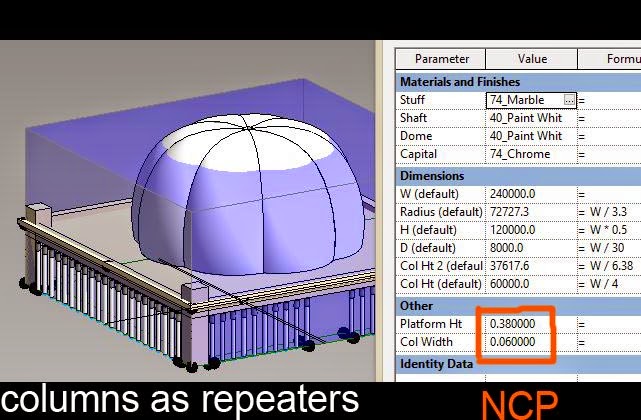 The segment family is based on a box rig.  The angle is calculated from the width and length using basic Trig.  Tangent of Angle = Opposite / Adjacent.  I might revisit this whole set-up later, but for the moment I'm reusing existing knowledge to test an idea for a building form. 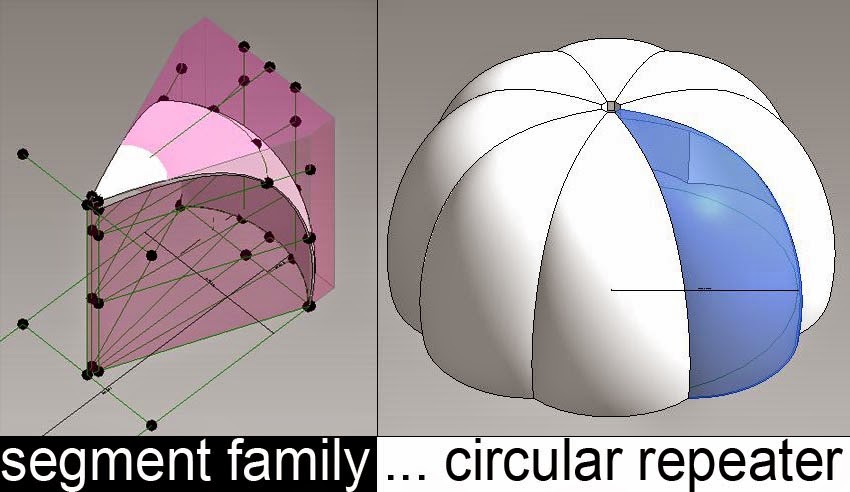 The columns go back in as repeaters, also the trees.  Everything is wonderfully parameteric and scalable.  I work up different versions of rendered images again. 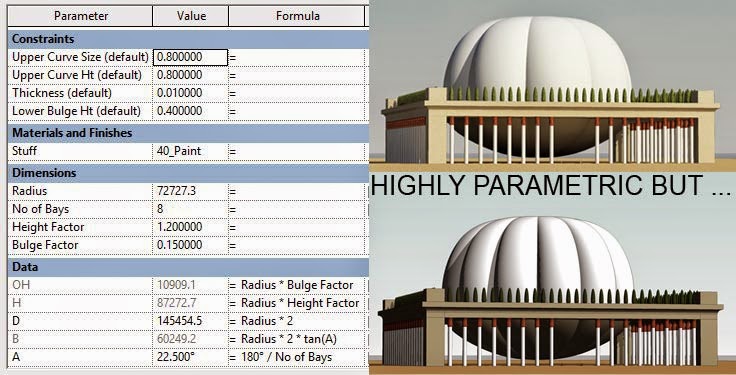 But in the cold light of day it all seems very forced, and to be perfectly honest rather silly.  No matter how I play with the "number of segments" and the "bulge factor" the basic composition doesn't hang together, and at this point I put the whole pumpkin idea on one side and focussed on my presentations for RTC Chicago, thinking "maybe I'll come back to this, and maybe I won't"