The clock is ticking, and as with any design project we have to stop buggering about at some point and make some firm decisions.  This is my design concept.  Pumpkin wedges, facing outwards, arrayed around the base of an elevated pumpkin.  Let's move on from concept to scheme design.

I think the next step will be to firm up on the scale and on the number of wedges.  Scale has two parts: overall scale, and relative scale of pumpkin to wedges.  This may be a fantasy, but there has to be a whisper of truth.  All good dictatorships know this.  Mask your lies with with the thinnest of veils of righteousness.  What am I talking about ?  The design must be informed to some extent by functional and structural considerations.  We need not be too strict, but without this element, it is not design at all, just wishy-washy day-dreaming.

3 things at the back of my mind.  I would like to bring more light into the bowels of the earth (the space under the bowl).  That bowl needs more convincing structural support.  We need a more convincing circulation plan.

But first let's rebuild the pumpkin wedges in point world.  They need to be masses if we are to play with floor plates and areas (ie test the scale) and the repeater concept will probably be a more robust way of making a scalable base. 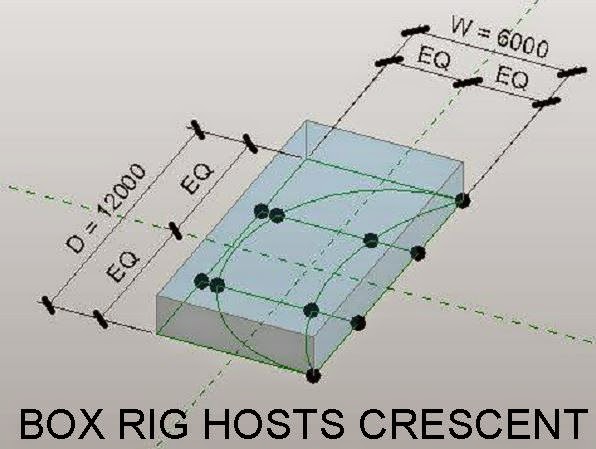 So I'm going to use a box rig, but the wedge itself will essentially be built off a rectangular rig (the bottom surface of the box).  The rest of the box will be hosting the void cut. 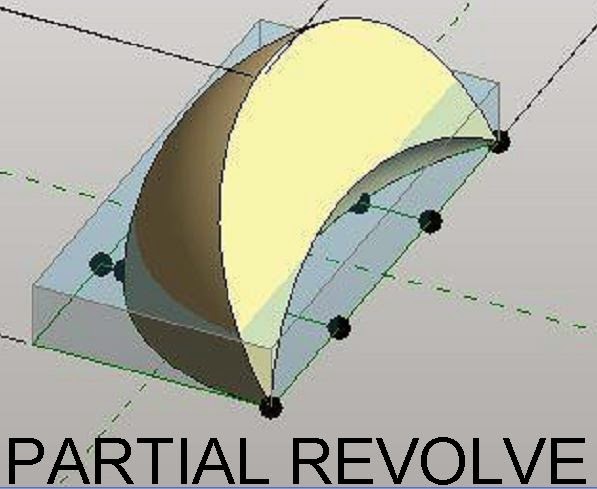 I just need one formula, which expresses the height in terms of an angle.  (Tangent = Opposite over Hypoternuse ... ie Height over Width)  The length of the box (D because it was originally conceived as Depth) controls the length of the pumpkin wedge, which is a revolve. 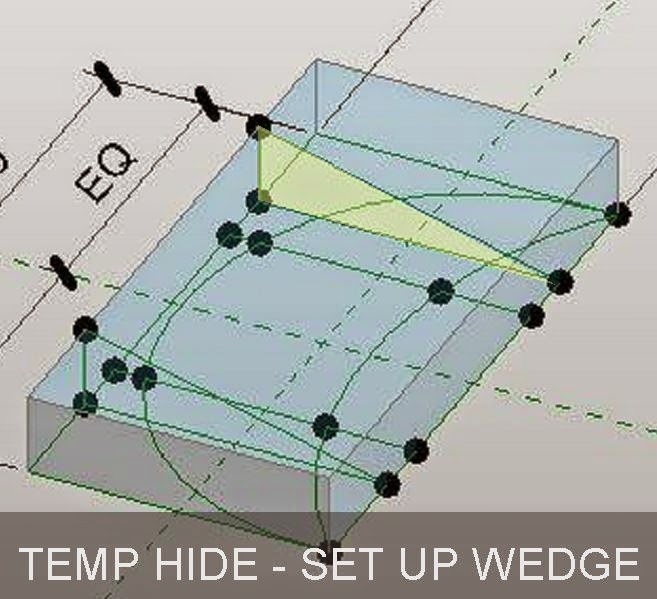 The profile of the revolve is hosted on ladder rungs in the time honoured manner of my rectangular rigs.  Like any respectable revolve it has a start angle and an end angle.  Start angle is zero, end angle is a parameter.  I'm sure you can figure out what's going on from the pictures. 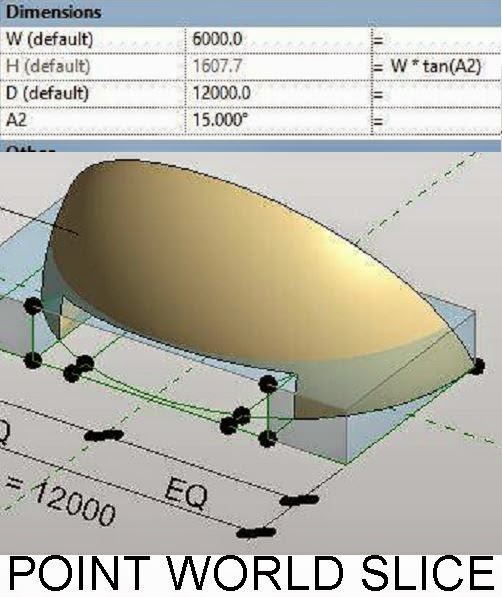 I made this as a mass family, then hosted it into a Generic Model Adaptive (GMA).  The GMA can act as a repeater component, also by nesting I can play around with the orientation of the pumpkin slice.  This is important because I have yet to find a foolproof way of ensuring that components will orient themselves in a repeater exactly as I would like.  Nesting allows me to go back and host my slice on a different reference plane.  It this case it needed to stand up on end, which is after all the orientation it had before it was sliced out of the pumkin and tossed to the ground. 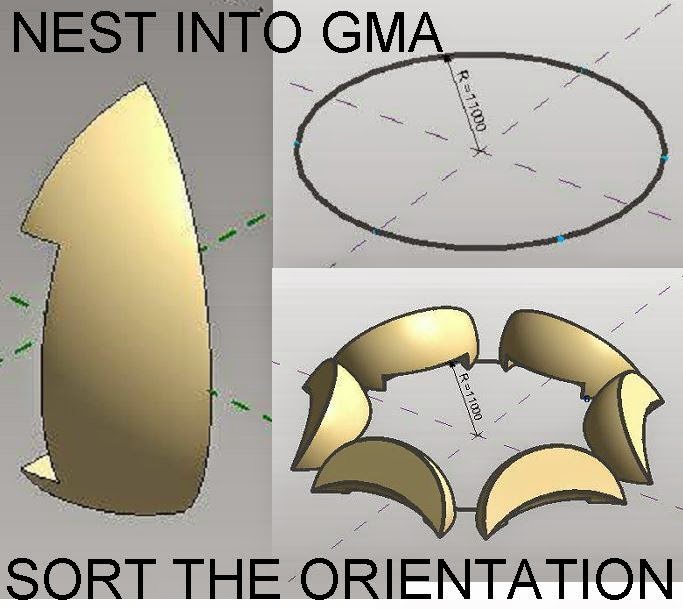 In the master base family, I create a circle with a radius parameter.  Turn this into a repeater (actually the original model-line circle will also be retained as a separate object)  Host a slice, fiddle around till I get the orientation right, and repeat.

Now I can vary the length of the slices and the number of components to very easily play with different base configurations.  I chose to load this into a project and separately insert my egg family (the auditorium). 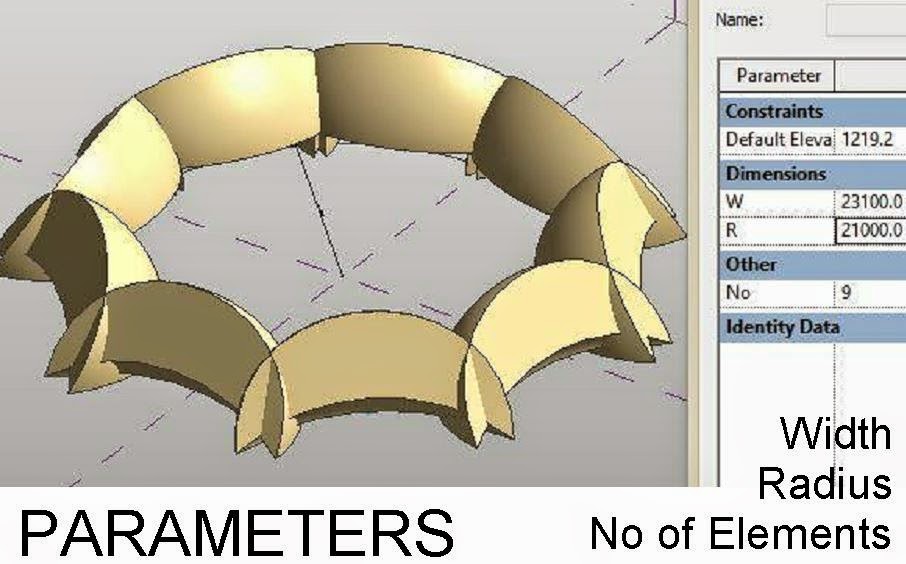 That way the base can be selected separately when creating mass floors.  Immediate feedback on the kind of useable area I can expect. 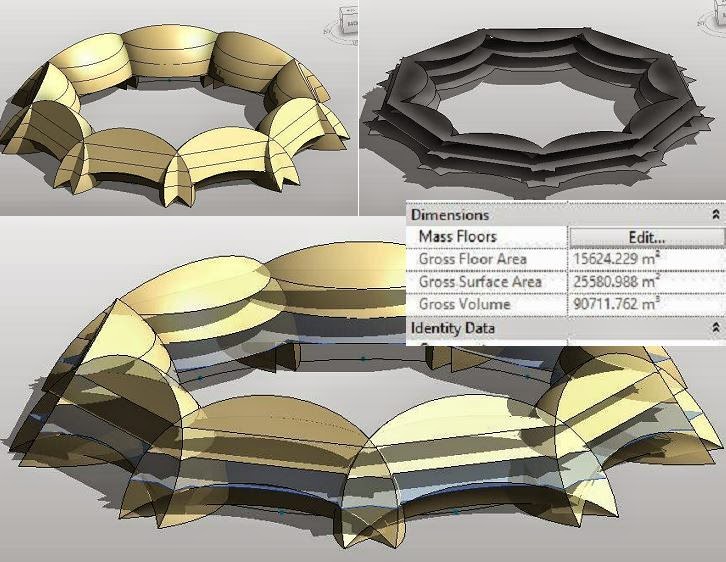 For the moment let's keep the number of slices constant at 9.  That number seemed to work well last time and it makes for an unsual geometry.  To create a gap between egg and slices, I will need alternative support for the egg (it no longer touches the slices)  I also need vertical circulation so let's start very simply with a series of rectangular lift cores. This is the second time I have come across wierd behaviour when takin a section through the exact centre of a revolve. 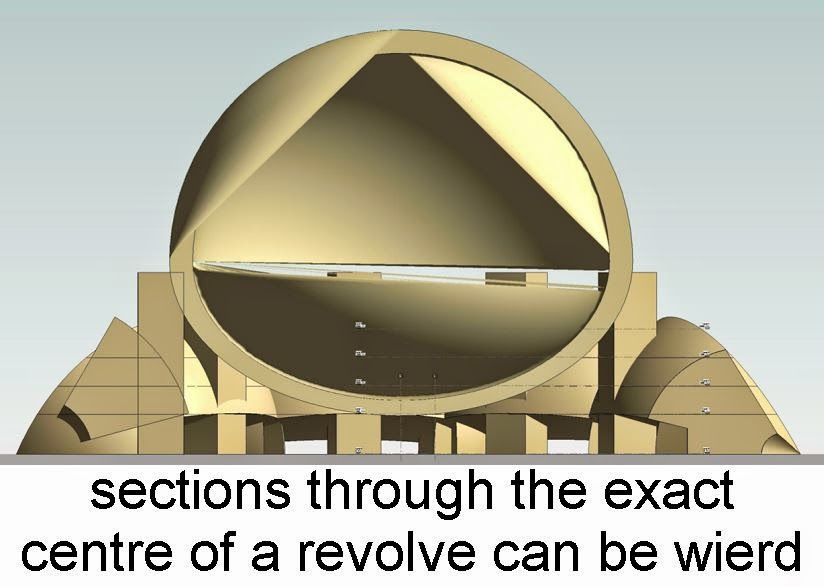 I was surprised by how quickly reducing the egg size spoils the overall composition. I don't want the slices to be too dominant.  Everything else should appear to be subsidiary and supportive to the egg/pumpkin.  Of course part of the problem has to do with placing the camera too close.  The nearer you approach, the more dominant will be the base, and the more the auditorium dome will recede as you look up at it, ever more steeply.

So I used a more distant camera to judge the relative sizes of the elements.  2 or 3 iterations produced an acceptable result.  Also this exercise justified my decision to keep the elements separate rather than try to do everything via on monstrous parametric family.  Keep it simple.  Focus on design.  Get the job done. 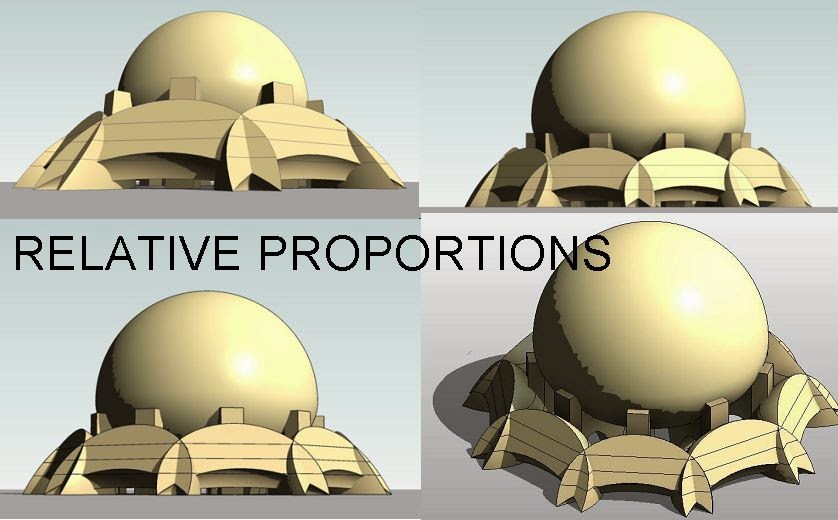 Looking at the section I decided to bring back the spokes idea from the octagon scheme, but make them more organic: a huge lunging arch. 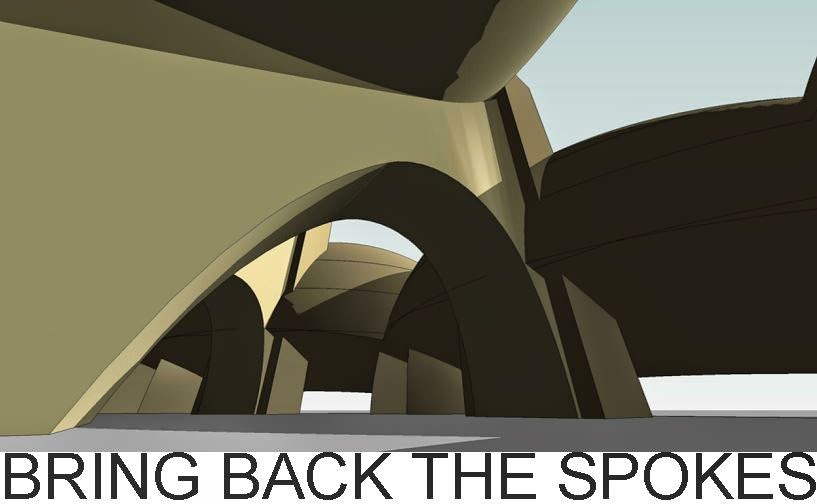 Once again some drafting in section view helped me to think things through and quickly generated an image that could be used in design meetings.  We have accepted the idea of drafting for construction details.  Totally counter-productive to model screws in 3d.  Doesn't the same principle apply to early design.  Why try to model every detail of a concept that may get the chop next week ? 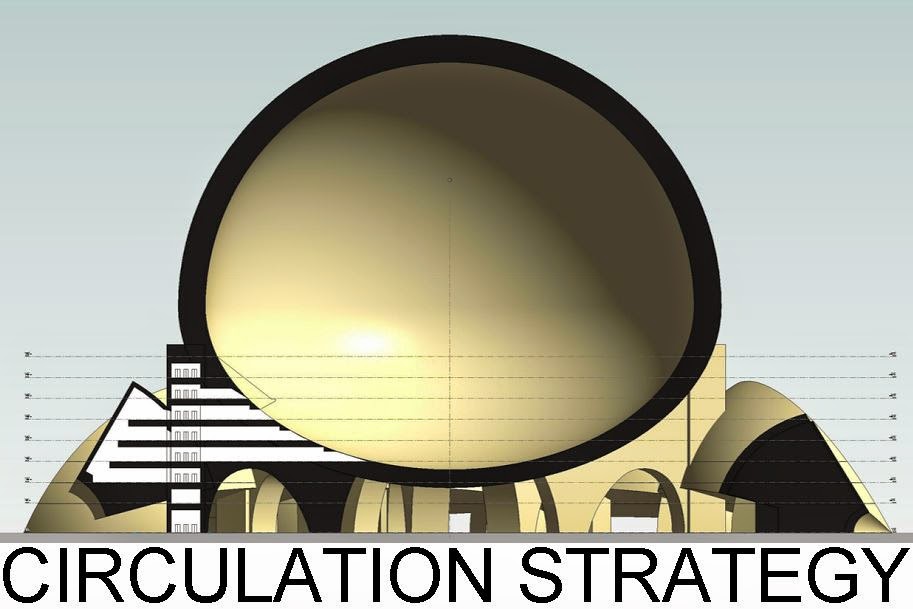 A similar approach applies to further comparisons of scale.  In my first post I looked at monumental scale via simplified massing models.  This was an appropriate approach at the time, but right now I want to put my auditorium in context and think about banks of seating.

So I dragged jpegs into my section, duplicated the view, dragged in some more.  How about Garnier's Paris Opera or Adler & Sullivan's Chicago Auditorium. The point is that Revit contains an embryonic Desk Top Publishing capability.  Personally I would like to see this side of the programme enhanced.  It would certainly appeal to designers.  Don't we want designers to be more involved in BIM ? 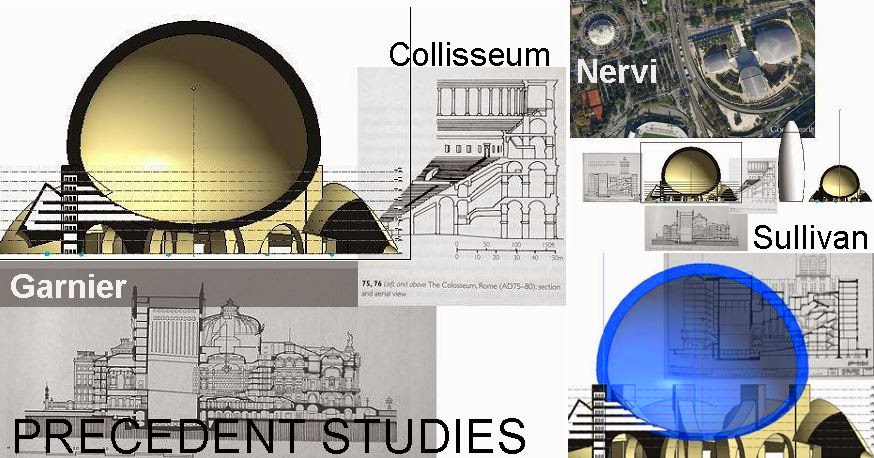 By doing the 2d, touchy-feely stuff within the BIM software it's easy to switch back to 3d.  So I created an in-place revolve, just 40 degrees with some embedded void extrusions.  Then I arrayed these around in a circle.  Quick and dirty, generate some images, stand back and reflect. 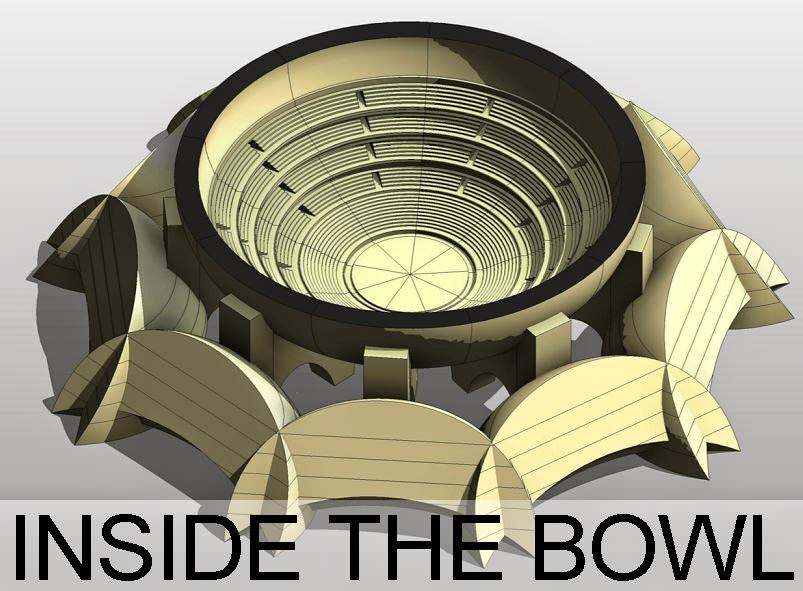 Want some plans ?  Now the automation of BIM comes into play.  And what do you know ...  the results are reminiscent of Boullee & Ledoux.  That same monochrome, figure/ground feel seems to have found its way into my pumpkin by osmosis.

This gave me a real kick and drove me on to work up some image-processed renders. 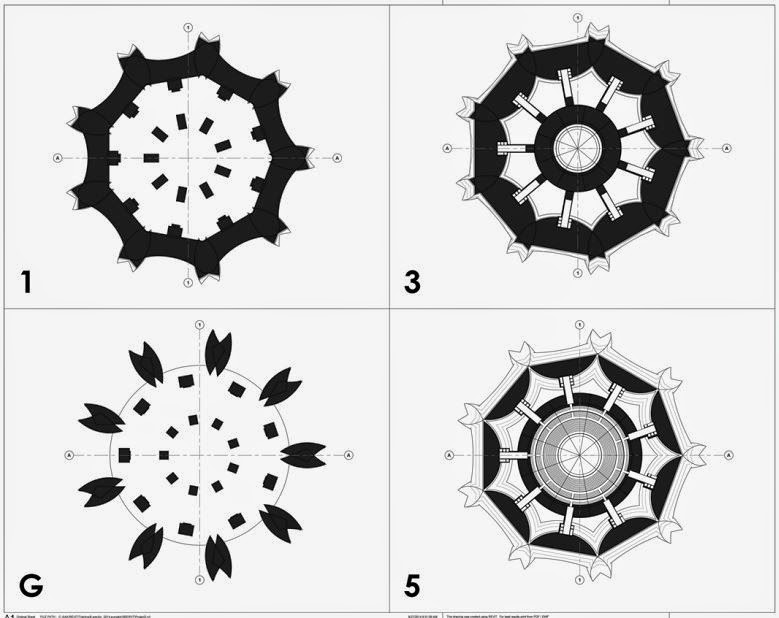 Do I have to justify these ?  Is there something un-BIM-like in spending an afternoon overlaying layers and applying artistic filters to what is essentially a static image, divorced from the intelligent model ?

Well I would love to see these kind of capabilities integrated into BIM authoring software.  But I don't see that happening any time soon.  In any case it sometimes help to take a break and do something different.  I've compared this before to playing a guitar song on piano.  Always throws up fresh ideas, new interpretations. 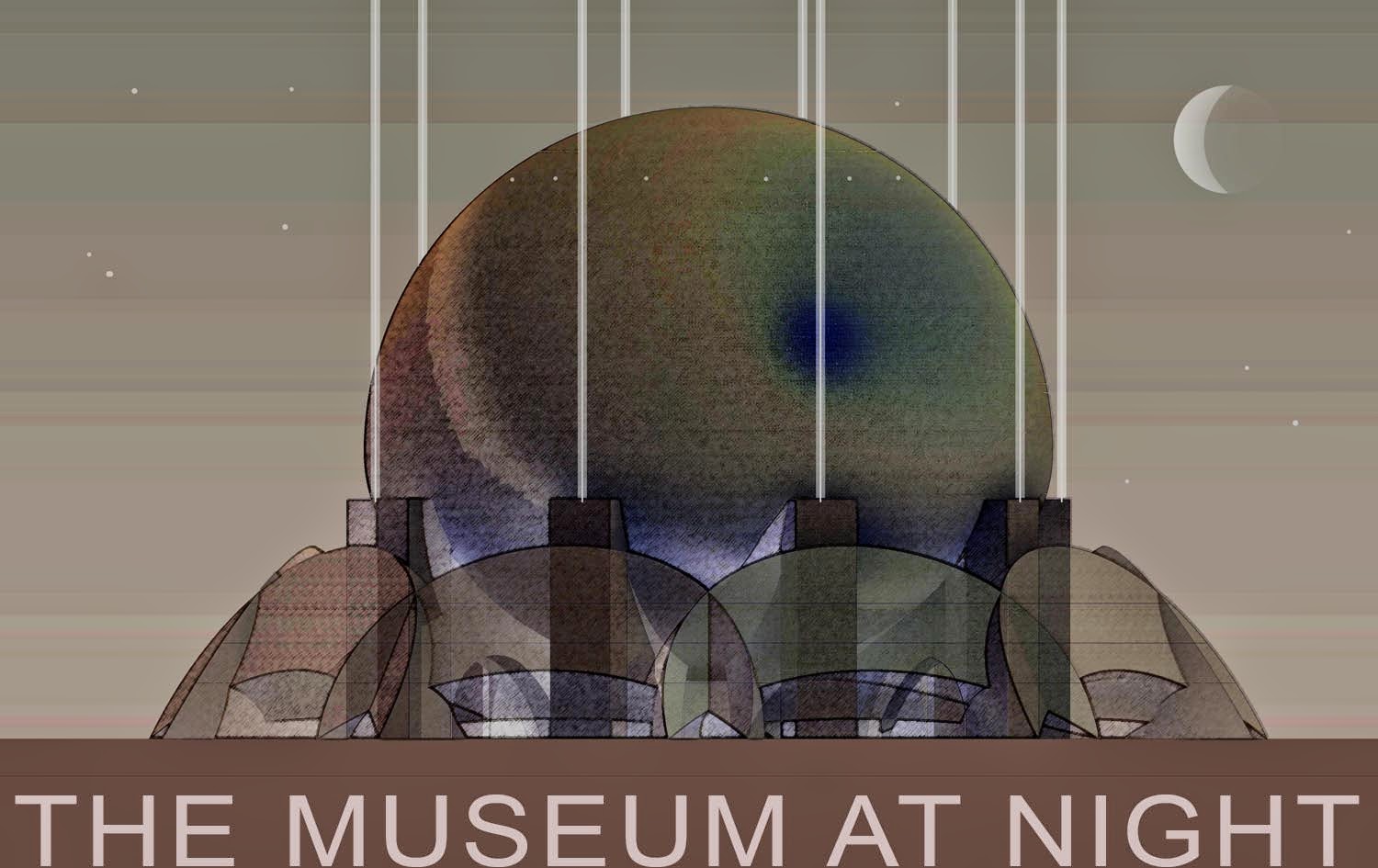 Notice the Albert Speer spotlights in my night shot.  Cathedral of light in the desert.

The Mirage version began as an attempt to reveal the inner workings using transparency and layering, get a feel for the relationship of the crypt to the dome above. 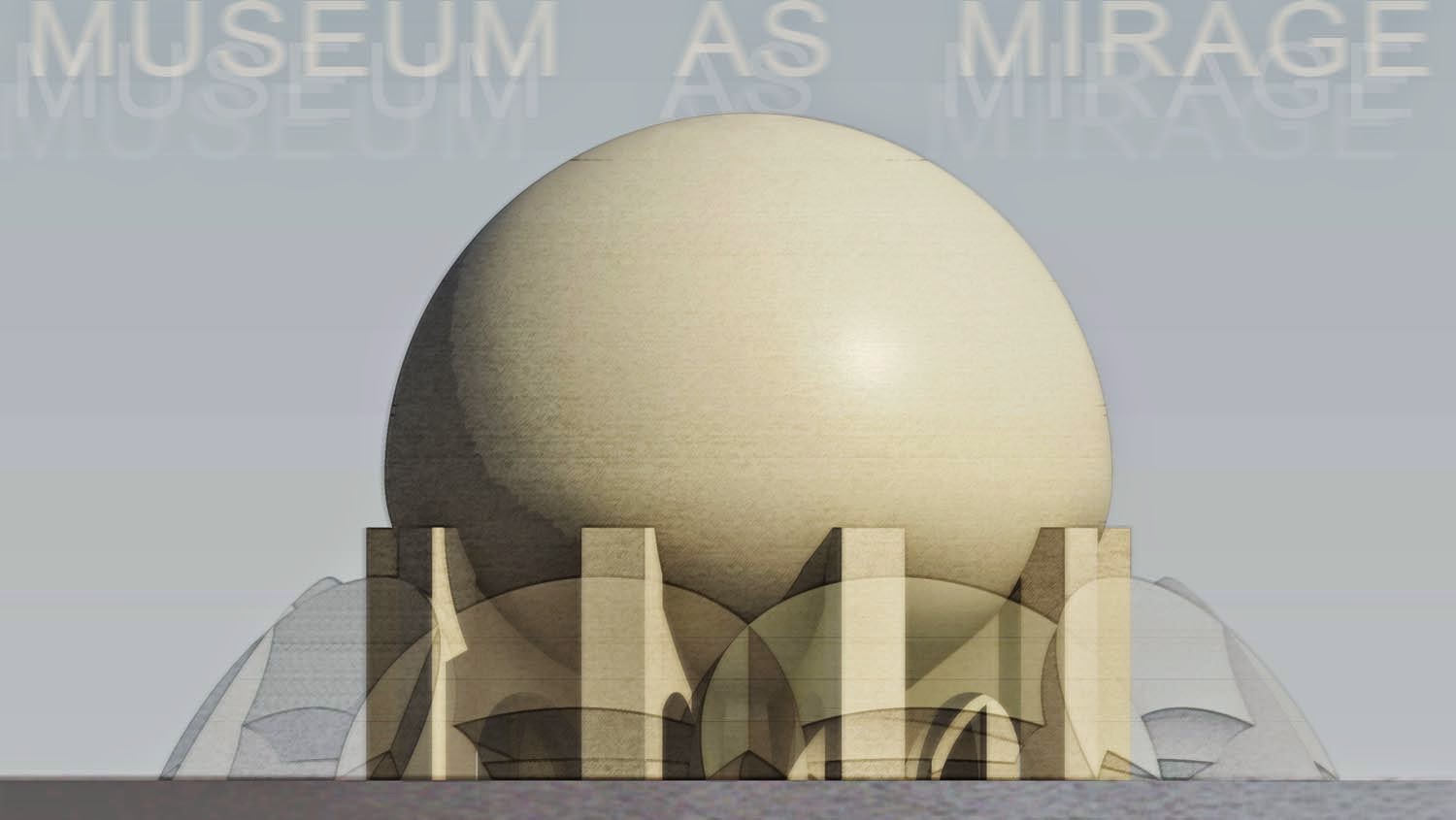 Sometimes it's good to spend the time layering up people and trees to flesh out an image.  Sometimes it's OK to keep things raw.  Just add some textural effects and express the drama of the space.  There are no fixed rules in the world of design.  Are BIM managers so fond of their rules that they can't get along with designers ?  I really hope not.  It's all about team work and we need to pull down the existing barriers, not erect new ones. 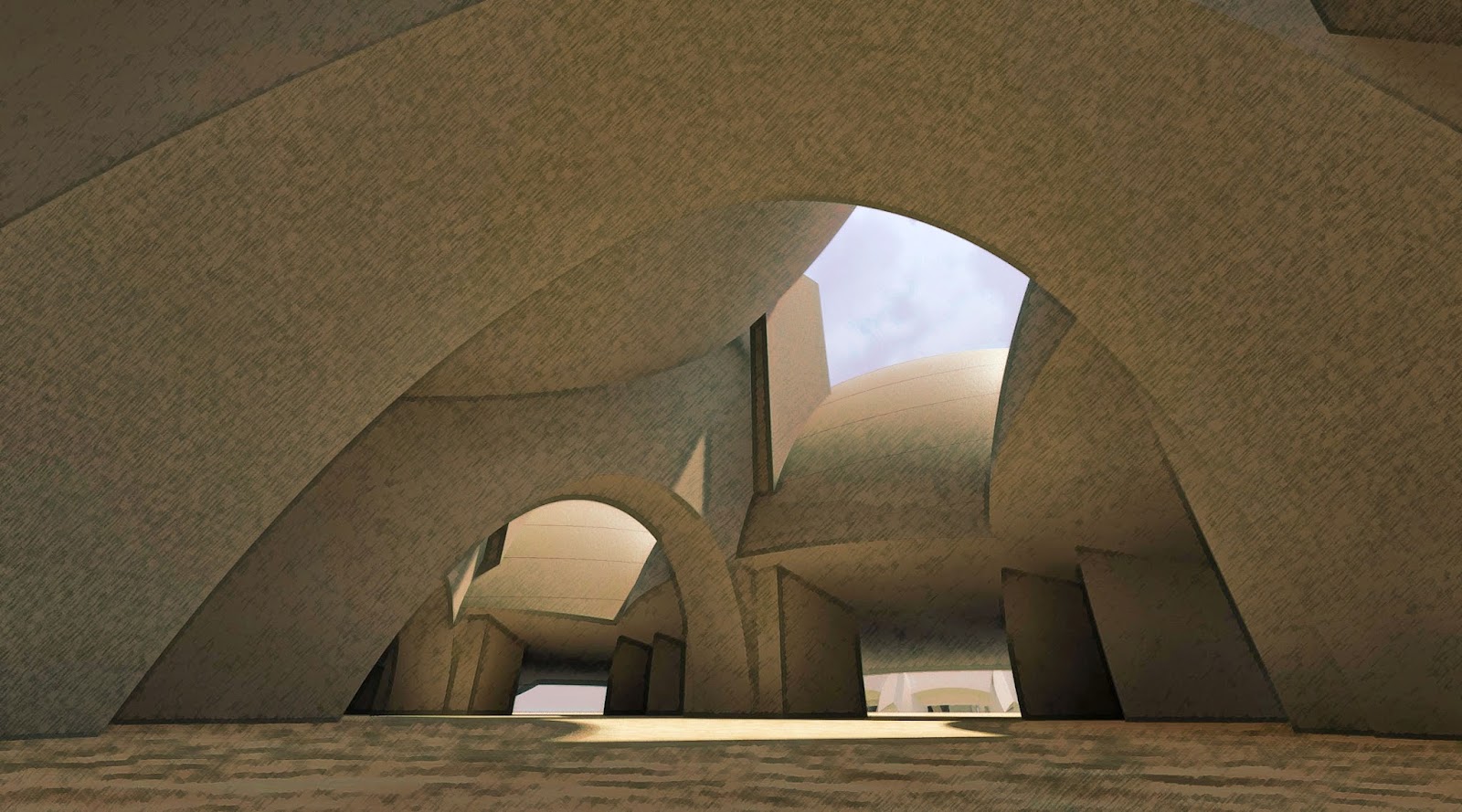 The final image is very, very simple, and almost monochrome, but I love it to death.  Somehow it evokes the cool grandeur of one of Boullee's magnificent etchings.  I'm starting to enjoy this. 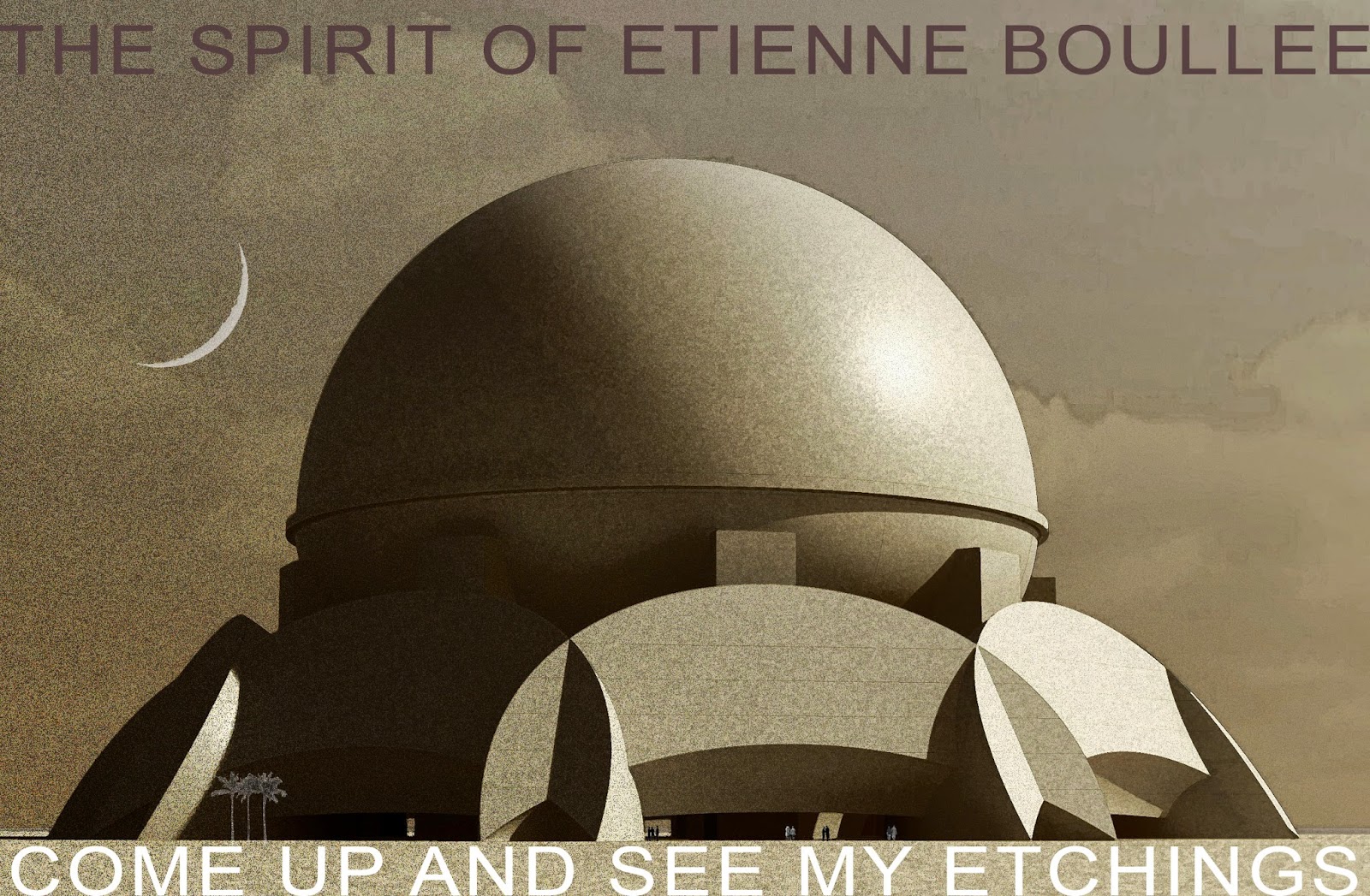