ASK NOT WHAT PROJECT SOANE CAN DO FOR YOU

This post is directed at all those who have registered for Project Soane but not yet contributed anything (except maybe a like or two).  Perhaps you are having trouble deciding what to make.  Maybe you feel intimidated by some of the "advanced" contributions that have been uploaded so far.  You shouldn't be.  This is "crowd sourcing".  It means we need a whole bunch of people to get actively involved.

My goal is to suggest a number of relatively small, self-contained tasks suitable for an "average" Revit user, which would also be valuable contributions to the project.  I am hoping that I will then be able to incorporate these elements into the larger assemblies that I have started to rough out. 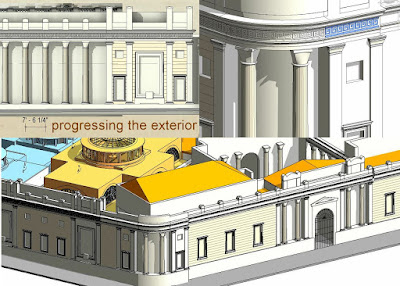 For example over the weekend I spent some time improving the external screen wall that I had mapped out in outline 3 or 4 weeks ago.  There are a number of decorative elements that need to be made as families, such as the urn that features at Tivoli Corner.  4 feet high, one revolve & one extrusion.  Maybe include a material parameter.

Download the image below, bring it into family editor, scale it up & trace over. Upload the results to Project Soane.  Half an hour max. 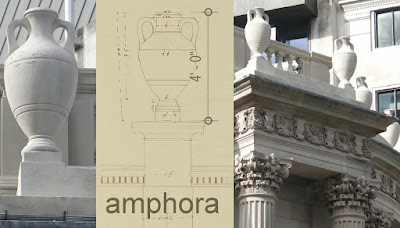 There are other elements that have already been made, but at present are very crudely represented using placeholder families.  It would be great if a few of you would volunteer to create versions of these at a higher level of detail.  Doesn't have to be perfect, just a little bit better than what we have at present.  Baby steps will get us there if everyone pitches in.  For example there are  two entrance gateways along Lothbury. 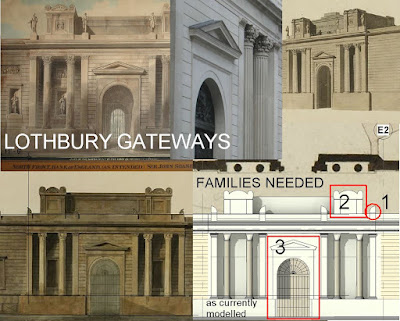 Three families here that need work, ranging from very simple to intermediate.  There is a parapet element that is used repeatedly, right around the building.  It may be two curves, crossing to form a kind of groin vault, or it may be more like one of Soane's canopy domes.  It was drawn both ways and maybe both types were used.  Old photos aren't a sure guide either because the parapet was raised some time after Soane's departure.  I think we should make both versions. 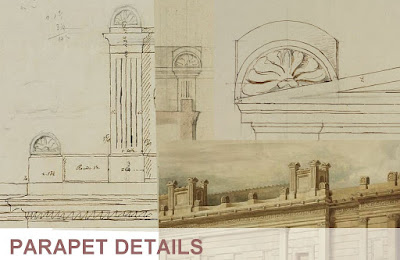 If you have a little more time to spare, there are parapet elements based on scrolls and shells.  There is a variant on this that wraps around the curved corners also. 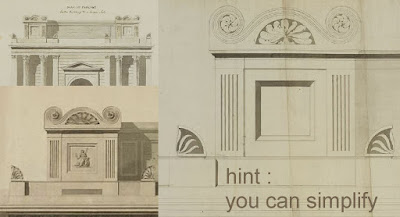 Then there are the gates and doors: at least one in each of the 4 elevations.  Along Lothbury we have two, almost identical gateways: the bullion entrance and what amounts to a tradesmen's entrance.  Sometimes these are shown as solid doors, sometimes as wrought iron gates.  The bullion entrance has both an inner and an outer gate.  Perhaps we should show the outer on as solid, and the inner as wrought iron. 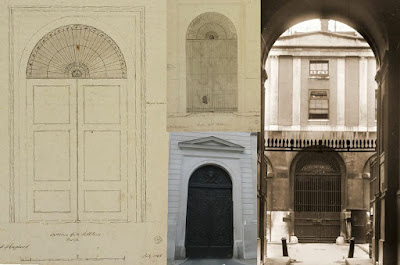 Another very simple one is the key pattern that runs around as a frieze on the entablature along Threadneedle Street & Bartholomew Way.  I have estimated the size and drafted out the geometry of the basic repeating module as shown in the next pic.  Two extrusions, one half the thickness of the other will do the trick here. 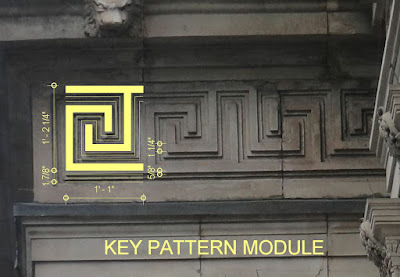 I have dropped a simplified placeholder in place at present.  I made it as a generic model family then nested this into a baluster.  Then I defined a railing type with these balusters spaced appropriately.  You can now draw straight and curved runs of the pattern with consummate ease.  In the model I used the "pick" option to draw the path and selected the flat face of the wall sweep that we want to host the frieze.  That worked fine.  You can still adjust the endpoints of the path to get the pattern to start and stop where you want it. 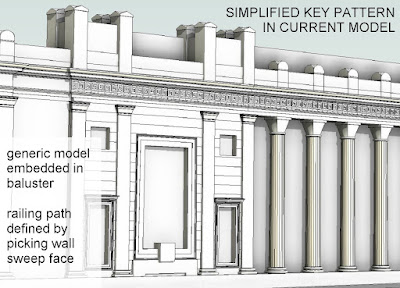 There are lots more elements that need family development.  Different parapet treatments on the Princes Street facade for example.  Just open up the model from Project Soane and take a look.  Lots of stuff in there that needs work. 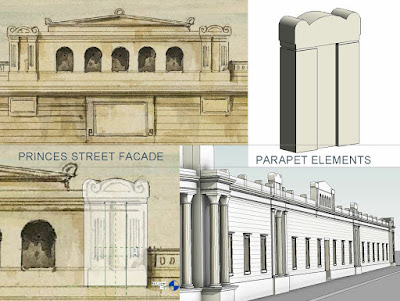 In case you are wondering where some of these reference images are coming from, I downloaded them from the Soane Museum Online Archive.  There are links in the Project Soane Wikipages that take you there.  Literally hundreds of drawings for the bank are available here.  They are not quite as high res as the ones provided in the data folders, and take care because many of them are early studies, not the final design.  That said, it's a fantastic resource.

I am totally hooked on this mission at present, but unfortunately also very busy at work.  (I shouldn't complain, it pays the bills :)  So I don't have time to model all this stuff and my major focus is on trying to tie everything together, resolve dimensional issues and fine tune alignments.  Why not lend a hand ?

A couple of people have made really major contributions in terms of modelling some of the internal spaces.  But if you don't feel you have the time or the skills to tackle something that big, there are many, many smaller elements which you could contribute to the project.  I hope these suggestions will help. 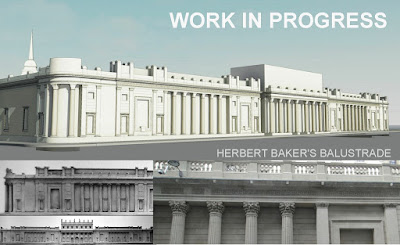 So that's where I am with the exterior.  By the time you read this I should have uploaded the latest version.  I like this image because it reminds me of an architectural model.  Soane was a great one for making architectural models of his proposals (see bottom left)  Also note that the current balustrade details are very different from Soane's version.  Herbert Baker lopped all that off and just ran a simple balustrade around.

Perhaps that makes sense in terms of easing the transition to the giant wedding cake he was asked to place within the perimeter, but Soane's treatment has much more charm, don't you think ?
Posted by Andy Milburn at 6:27 PM