I'm pretty sure Steve Stafford will have posted about this at some point, but I don't think it's anywhere near as well known and understood as it should be so here goes.

After more than a decade of using Revit, last week a penny finally dropped inside the rusty cog-wheels of my grey matter.  Have you ever been frustrated by dimension chains losing some of their references when you reload a door family, or swap types, or whatever? This has been bothering me for a while.  Sometimes it even happens when I duplicate a type within the same family. Sometimes dimensions jump to new positions, even rotating through 90 degrees perhaps. 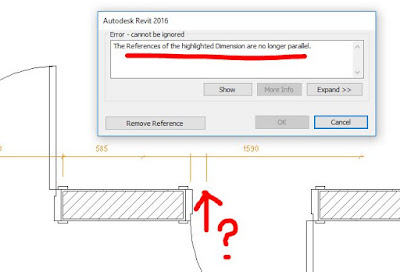 I am in the process of making new standard door families for use at GAJ.  At a rough guess I would say it's my 4th or 5th attempt to tackle this crucial standardising task.  Over here, doors are usually defined by their structural opening sizes. That's the dimension you give to the contractor. It appears on the dimensioned floor plans, and in the door schedules.  The width of the door panel, and the resultant clear opening size are derived values, depending on the jamb detail and door leaf thickness. 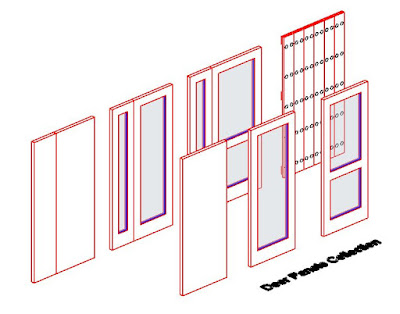 Most door families are driven by the Width and Height parameters.  The Rough Width & Rough Height tend to be derived by way of formulas.  This has caused some confusion in our office.  So I set out to make Rough Width and Rough Height the labelled dimensions, demoting Width & Height to the status of calculated values.  I know some people like to make new shared parameters with more explicit names (Structural Opening Height, Door Panel Width etc)  But I prefer to use what's built in if I can. 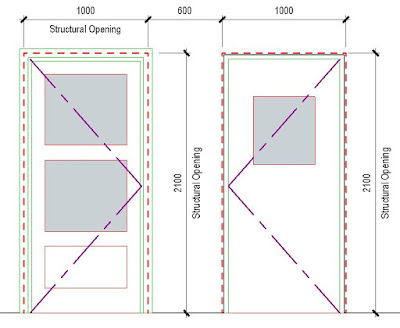 In the process of re-labelling I had to think carefully about which reference planes I was using, and to test the stability of dimensioning that resulted.  It turns out that by far the most reliable approach is to use the hardwired "Right" and "Left" for the ref planes you intend to dimension (Rough Width in our case)  Even better, choose "Not a reference" for the other planes.  Then your minions are much less likely to pick the wrong plane by accident.  Any other family that's made in the same way, with the driving dimensions attached to "Right" and "Left" can be swapped out with confidence. 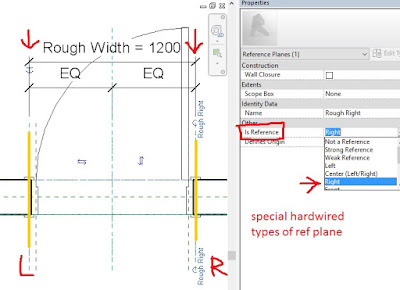 It's obvious to me that this is intentional behaviour.  That's why families have these built-in "Special" reference planes.  Those are the ones that you are going to pick up for dimensioning in your document set, and they are going to be stable, because Revit recognises them when you swap out a family.  But talking to other experience people in our office, I couldn't find anyone who was aware of this.  Maybe it's in the documentation somewhere, but I don't think it's widely known.

This is a real shame because it's absolutely fundamental and anyone making loadable families that are going to be dimensioned in a construction drawing set should have a firm grasp of the implications.

You need to be clear in your mind what is the critical overall dimension for this type of object.  In our case it's the edges of the "Structural Opening".  Then you need to make sure that you use the "Right" and "Left" reference planes to define these edges in all your families.  And do think carefully about which parameters you want end users to input when defining the size of doors.  What is the standard industry practice where you are ?  Think like a contractor.  That's often the best advice when determining BIM standards and procedures.