It's strange really how we develop loyalties to brands.  I took an interest in the Mac very early on, when it was still a funny little box with a monochrome screen, (and Windows didn't really exist yet). But based in Africa as I was, I could never afford one and gradually I grew tired of all the hype, the smug superiority and ultimately developed something of an aversion to all things Apple.  It was a similar story with Archicad. I dabbled very early on, long before Revit came on the market, and could so easily have become a faithful devotee. But life took a different turn and ended up a Revit junky.

I was a bit late to jump on the touch screen band wagon and when the time came I opted for a "Windows ecosystem" I took to Windows 8 from the beginning, and never really understood the fashion for Microsoft bashing. But it's no good complaining about other people's prejudices if I'm not willing to tackle my own.  So early last year ago I bought myself an iPad.  Three birds with one stone: a new sketching device, access to Autodesk apps, put my prejudices to rest.  The apple pencil has been a bit disappointing, but there are many positives.  Ironically, the Microsoft apps are especially good. 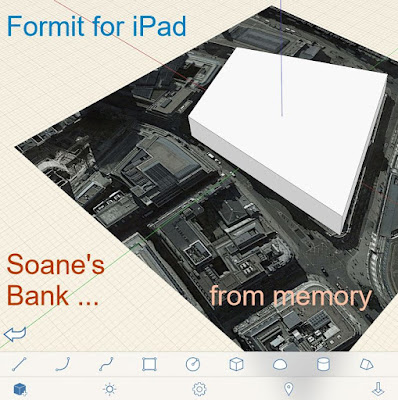 Emboldened by this I recently replaced my work Blackberry with an Android version.  I still love my Windows phone, but not enough people agree with me to support a full range of So I am enjoying having feet in all 3 camps, and this weekend I found myself taking another look at the iPad Formit app.  It started off as something to do as I lay in bed with a dose of flu.  I downloaded site imagery for the Bank of England and started to mass out Soane's Bank from memory.  This was more by accident than design, but I soon realised it was a very positive learning experience, making me think harder about proportions and relationships, testing my understanding, raising new "WHY" questions. 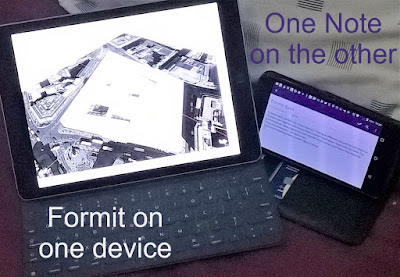 To record these observations, I decided to open One Note on my Blackberry.  It seemed less disruptive to my train of thought than switching apps, kind of a poor man's version of the dual screen.  All the while I was learning on two fronts simultaneously: gaining fluency with the iPad user interface for Formit while probing my understanding of the basic massing of the bank.  This was something I tried to do when I first started Project Soane, but it's very different coming back to it almost two years later.  The difference between sketching to explore something totally new, and sketching to crystallise, summarise long familiar material.

So as I worked at my dual problem, all kinds of remembrances flashed by.  All the time I spent hand-sketching and painting as a schoolboy.  My many previous reflections on what it means to sketch in a BIM world.  The foreword I wrote for Paul Aubin's book. Memories of using Sketchup 15 years ago 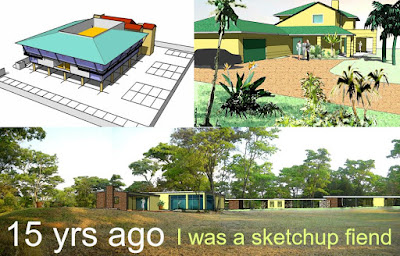 If Renaissance Revit was about symbiosis (the positive feedback loop of two intertwined explorations) Project Soane has become an entire ecosystem. Architecture, Social & Economic History, BIM tools & Processes, Soane himself, the Industrial Revolution, the functional organisation of the bank.  The interaction between these mental domains has been very exciting for me.  So why can't the world of push-pull modelling become another element in the mix? 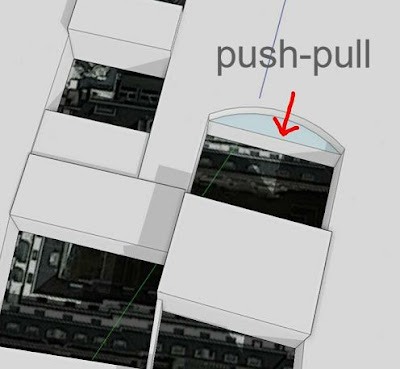 Of course there is a downside.  All those awkward little wedges that have to be cleaned up for example.  How well I remember those. And I find myself asking why am I doing this in Formit? It's less precise than Revit. I'm drifting away from the "single source of truth" approach. So how will this help me?  Isn't it duplication of effort?  What is the point of sketching in a BIM world? 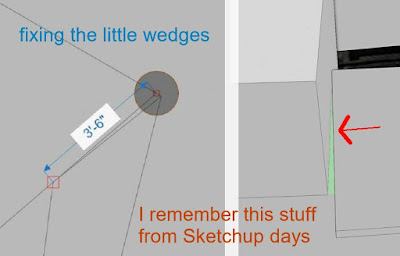 But practice makes perfect. And of course there is value in starting from scratch, in rebuilding something from memory.  The guessing game is revealing. I have talked before about the insights that come from playing a guitar song on the piano. There's something of that in this exercise. 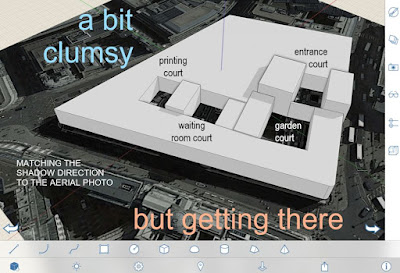 Working from memory I make mistakes, and the nature of those mistakes can be revealing. Sketching is about keeping things loose, letting subconscious intuitions come to the fore.  But those intuitions are also honed by practice.   I am rediscovering lost skills: the ability to judge proportions by eye, for example, instead of forever typing in a dimension. 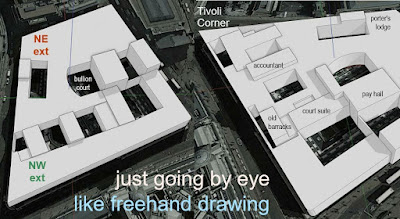 Sadly my attempts to hand sketch over exported images from Formit are rather disappointing.  Not sure what value this is adding.  Still, let's soldier on, Rome wasn't built in a day after all.  Try to learn from my mistakes.  Loose sketching isn't always the answer that the situation demands. 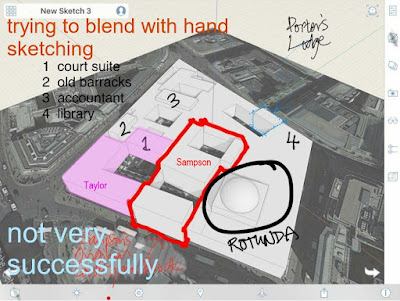 When I was a teacher, I was always looking for activities, to create opportunities for "learning by doing".  Drawing from memory was one of my favourites: a way to stimulate deeper questioning by setting up a kind of game.  You soon find out whether you have really grasped a concept if you try to encapsulate it in a diagram. 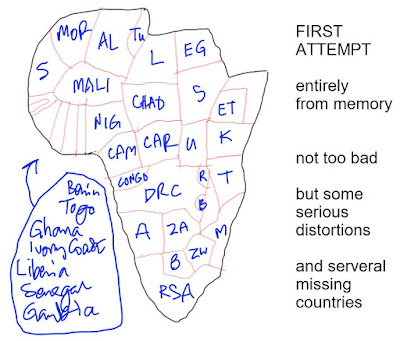 Some years ago, when I was travelling regularly to Mozambique, Malawi & Botswana I started playing this game with the Map of Africa. So it occurred to me that it would be fun to try this out on the iPad. This was around the same time as the Sketchup work I showed earlier, and I hadn't attempted it since, so I was quite chuffed with the results.  So I thought "why not do a second version by tracing over an actual map?" 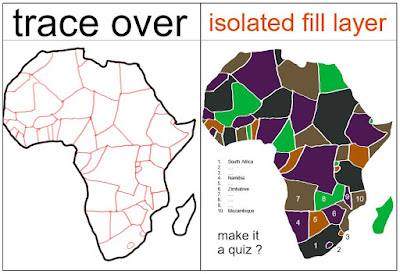 This turned out to be quite a useful way of practising control of the tools, and I was inspired to process the result in a number of ways: inverting the image and filling the boundaries to highlight countries in different colours.  Using layers to isolate the elements and export alternative versions.  Finally I decided to make a second sketch from memory. 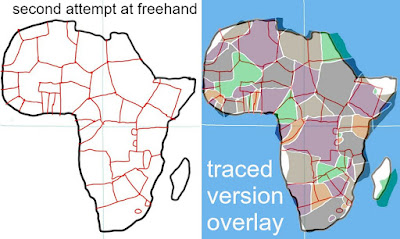 Aided by the simplest of grids, dividing the sheet into 4 quarters, I was able to draw a much better outline, fresh as I was from the tracing exercise.  I tested this by overlaying the traced fill. This reveals where my mental image is still wavering, but on the whole, the relative sizes and proportions are pretty good.  So why not take a similar approach to Project Formit.  Take a plan exported from Revit and make a second, more accurate model of the Bank. 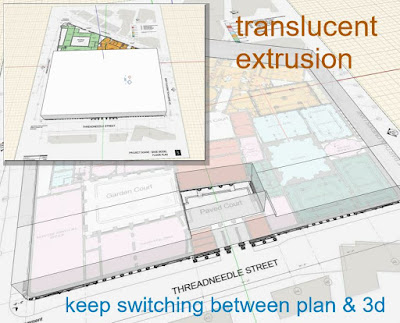 For this I switched to the Web version of Formit and took notes as I went along using my Windows phone. Might as well make the most of this idea of switching toolsets and approaches to gain fresh insights.  I started with a simple extrusions, applied a translucent material and switch to a top view to begin tracing the internal structure.  As the work progressed it was useful to add opaque colours to the completed elements so I could see the form more clearly. 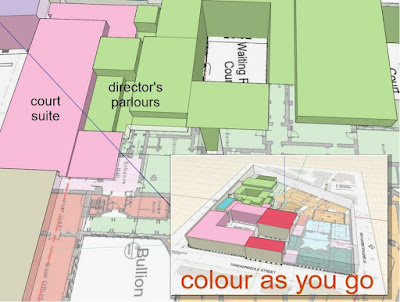 So what did I learn? The simpler, more abstract form highlights the contrast between Taylor's set pieces and Soane's intricate jigsaw puzzles.  It's partly a difference in temperament of course, but also I think of the complexity of the planning issues they faced. Another thing that comes out quite clearly in the green zone, is the increasing intensity as you approach the directors parlours.  That was really the nerve centre of the Bank, so it's quite satisfying to see it expressed in a diagram like this. 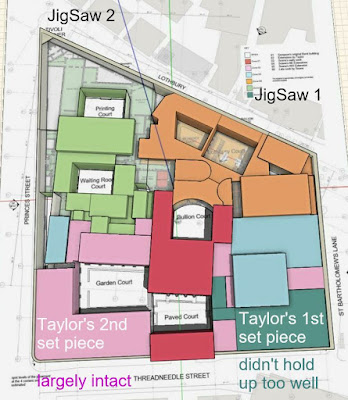 Clearly there is a lot of value in abstraction: in drawing & modelling something repeatedly and boiling it down to its essence.  This also showed up when I started to map out the rhythms of the Screen Wall Elevations.  They are rather easier to understand when you strip away the excess detail.  Once again I am reminded of my desire to do this kind of analysis right at the beginning of my efforts.  But of course it's not so easy to do when you haven't yet come to grips with your subject matter. 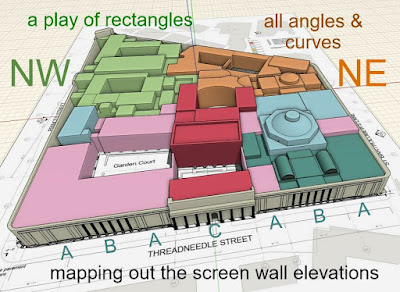 Once again it was revealing to compare the first effort, (purely from memory and using the touch interface) with the second more controlled attempt (traced over an image from my Revit model, using the extra capabilities of the web version of Formit) 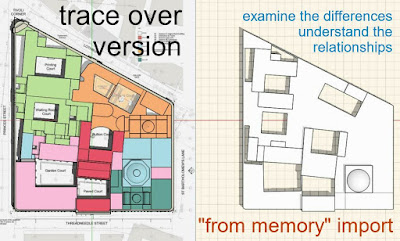 And so I continue to ask the question of how to bring a more intuitive, free-flowing approach to the world of BIM.  So far, Formit has been an occasional diversion, rather than a regular counterpoint to Revit (my trusty BIM pencil) but maybe that can change.  Maybe I can find useful bidirectional workflows.

Digital sketching also remains tantalising & elusive. Perhaps it will never be "just the same" as drawing on paper, but it doesn't have to be.  However I do need to find ways of more quickly and easily achieving results that I find deeply satisfying.  It needs to become a more transparent medium for visual thinking.
Posted by Andy Milburn at 12:56 PM