This is another dormant post.  (dating from November 2016)  It's fun for me to look back on what I wrote a few months ago and finish my sentences, so I hope it's also of some interest to other beings out there. Flashback begins here:

I'm back at work now, but still reflecting on a very stimulating two weeks wandering across Europe.  Previous posts dealt with my weekend in Bavaria and the build up to RTC in Porto.  Of course I fell in love with Porto, and though some complained about the venue (distance to hotels, poor wifi) I was more than happy to trade convenience for ambience.  Conferences are primarily about people, so the mood of the moment is critical.  Here is a shot from the riverside terrace of the old customs hall where RTC took place. 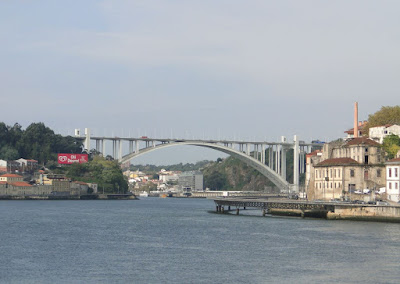 There are two beautifully engineered bridges here: one high, soaring concrete curve, spanning the steep banks of the Duoro; one low, sweeping steel curve, skimming over the water. The view is downstream, towards the sea, and behind the chimney (top right) lies a hidden gem of modernist architecture, built in the late 1980s. 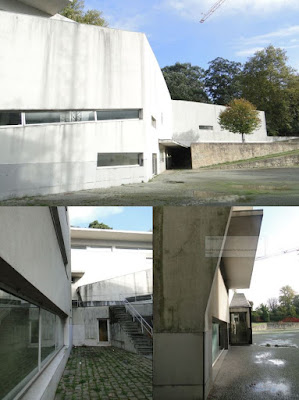 I first became aware of the Faculty of Architecture by Alvaro Siza when I was a mature student, completing my architecture qualifications in Joburg, 25 years ago.  It's a deceptively complex composition, resulting from the careful placement of rectan))gular blocks on a triangular site.  From ground level it seems to be far more irregular than it really is. 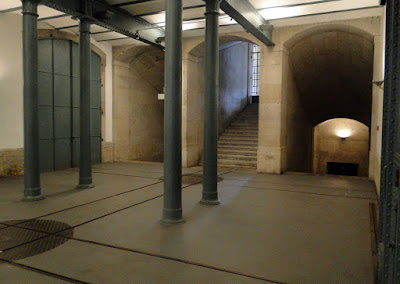 The Alfandega Conference Centre is an impressive combination of Metal and Granite, generally vey hard and tough but with the occasional extravagant decorative flourish.  There are tram lines everywhere which were used to transport inported goods on low trolleys to their temporary resting places, awaiting customs clearance.  The floors formed of shallow brick jack-arches spanning between steel joists are typical of fire-proof construction across Europe in the nineteenth century, as are the cast-iron columns.  Everyone I spoke to was intrigued by the little round turntables wherever the tram-lines crossed. 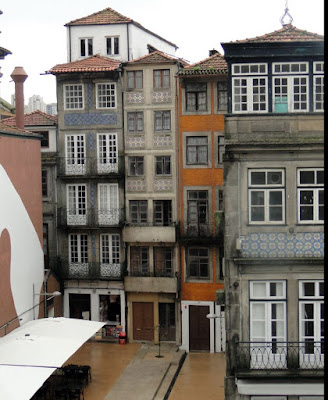 Porto itself is full of tall, narrow houses and steep, cobbled alleyways.  Granite is the predominant material, sometimes plain and square, sometimes intricately carved and curvaceous.  Everywhere there are balcony railings and ceramic tiles, both with infinite variations on decorative themes.  The moorish influence is immediately apparent. 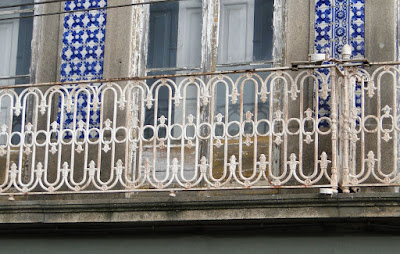 I had one day to walkabout the old town with an umbrella before plunging into the BCS, a one day event focusing on "content", and bringing together manufacturers, designers and content providers.  This is another little hobby-horse of mine.  I think we should not be focussing on CONTENT as such, but rather on the role of manufacturers in BIM processes, and more particularly on how to enhance existing collaborations between designers and manufacturers using digital tools.  Stefan Larsson of BIM Object gave a very lively keynote address, and the morning sessions generated some heated debate.  It was my second time to meet Stefan, and I do think that BIM Object has made a tremendous impact in terms of alerting manufacturers to BIM.  The BIM Supply initiative that they are about to launch looks especially promising to me and I really do hope it develops into a robust platform for interactive collaboration and data flow. 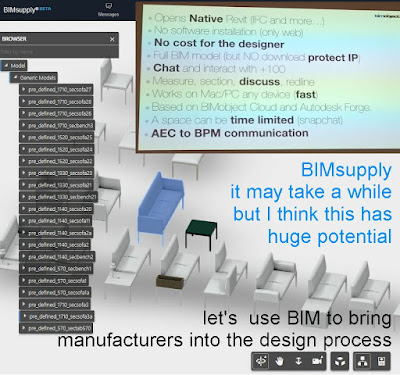 My contribution was a short "rebuttal" and I used the opportunity to press my case for collaboration platforms, rather than object repositories.  I think it was well received, even though I was denied the use of slides :)  You can see the full version, complete with visuals at my docs.com site here

The afternoon workshops were a bit of an anticlimax in my view.  I'm not sure why.  Perhaps the initial vision of using a forum like this to develop standards and protocols for object creation is a bit unrealistic.  It's very valuable to bring people together and thrash ideas around, but moving on to formulat concrete proposals may be premature.

My own position is that we have to get the collaboration processes right first, and that once manufacturers are using BIM-like environments to collaborate with designers they will see the value in continuously refining "BIM objects", in standardising datasets, improving interoperability, etc etc.  As long as BIM objects are just another marketing gimmick they are providing to designers for free, we are not going to make substantial progress.  But if they were to become essential tools for their own Specifications Advisors on the ground in every major city around the world, then I think they would become really motivated to ensure that they were really effective. 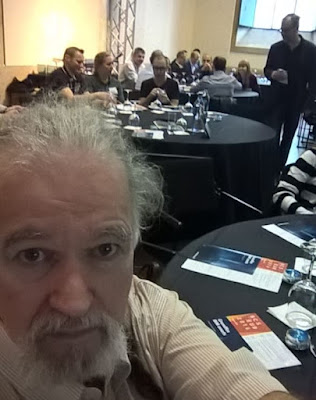 So what about RTC ... the last ever RTC as it happens.  Well it's only a name change really, but hopefully will continue the trend of opening up the conference to the wider BIM community.  Personally I find the new BiLT acronym a little clumsy, and the logo ... well it's better than the old one, but I still shudder to think what my good friend Ian (a proper logo designer) would think. 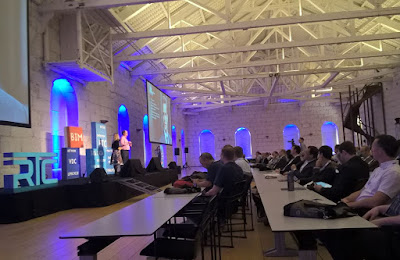 Anyway, the proof is in the pudding, meaning the quality of the sessions, attendees and interactions.  On that score, RTC Porto was excellent.  You can never entirely predict how the sessions you select will turn out.  I always look for variety, to dabble in areas I might not otherwise consider.  Sometimes it works, sometimes it doesn't.  This time I found a couple of the labs really stimulating.  The plenary sessions on day one were good, and the evening events were excellent.  Here's a snip from the keynote address: digital fabrication research.based in Zurich 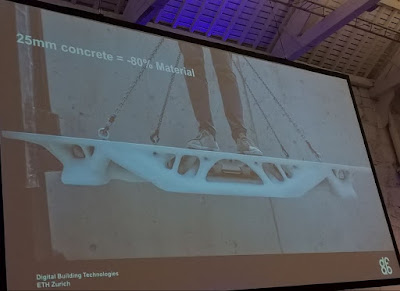 People complained about the internet, but for me the ambience more than compensated.  Early evening breakouts by the riverside were just magical.  These conferences are all about the people.  Tips and tricks are svery well, but you can pick those up on the internet.  The value of a really good conference is in the sense of being part of a dynamic community, converging from a wide variety of cultural backgrounds to indulge a shared passion.  The North American conferences are great, but the European flavour is subtly different and I really enjoyed the experience. 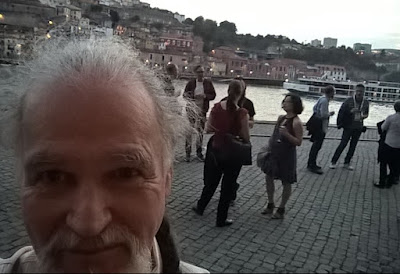 I had two sessions to lead, a whistlestop tour of Project Soane, and a Modular Doors Lab.  I enjoyed them both in their different ways and received good feedback.  I'm doing all this for my own benifit, primarily, and at 65 I'm not really looking to enhance my resume or gain international exposure.  But it's nice to be part of a community and to feel that you are contributing something useful.  Obviously I share some common ground with the European BIM/Revit croud, despite having spend more than half my life in Africa and the Middle East.  It's a home-coming of sorts for a self-confessed global citizen. 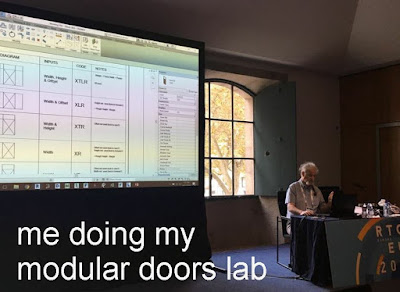 And of course the gala dinner was a fitting climax, followed by a visit to a little classic of modern architecture the next morning.  Thanks again Porto, see you in Singapore next month, and perhaps in Arhus later in the year. 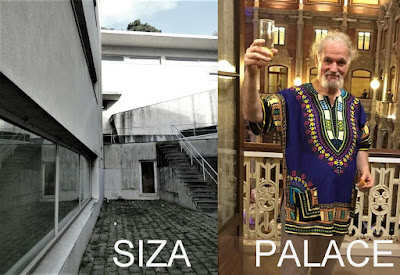