I had a problem syncing to C4R last weekend. Checking the cache I realised that the file size had jumped up rather alarmingly.  It's the Site Context file for the Board of Trade building on Project Soane, and I had been working up some design development studies using Phasing.  At first I thought phasing might be the problem (can definitely slow things down) but the way I fixed it was by simplifying my Corinthian Column family. 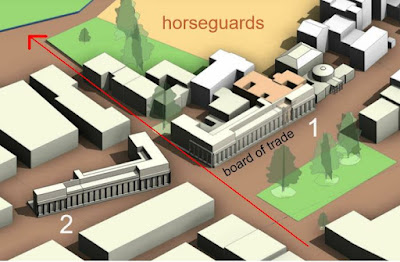 It's a massing study so I don't need all that detail anyway.  But next morning I was struck by the idea of using a new approach to a simplified Corinthian Capital.  Basically it uses two octagonal blends, (one rotated 22.5 degrees in relation to the other) to stand as placeholders for the two rows of acanthus leaves. For the scrolls I used extremely simple extrusions and the whole thing turned out to be extremely lightweight: 600kb as opposed to the 6mb of my original.  I had been quite proud of getting a Corinthian column down to 6mb.  One of the versions we had during the competition stage of Project Soane was over 100mb.  But there's a lot to be said for a really lightweight placeholder. 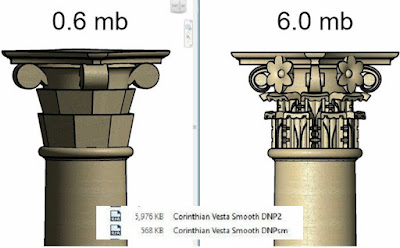 By elaborating the sketch for the blends slightly I got something even better with a negligible increase in file size.  But then I got to wondering what it is that pushes the file size up by a factor of 10. 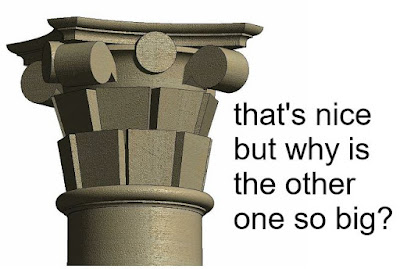 I tried deleting different parts of the capital one by one and soon discovered that my scrolls were the main offender.  So although I had started this exploration with an idea for replacing the leaves, the real breakthrough came from remaking the scrolls.  And in my view they were the weakest link anyway.  I was never really happy with the way they looked, but hadn't found the energy to try again. 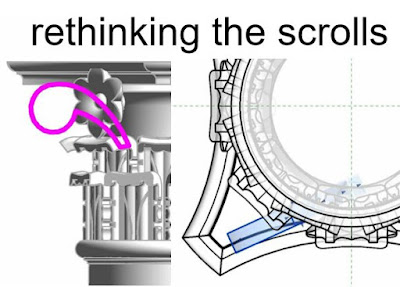 It seemed to me that the trick was to just use a series of solid extrusions.  Has to be the lightest of lightweight modelling methods.  So I made a sketch like an apostrophe (or a tadpole) and to be more faithful to @theRealCorinthian, had two of these at each corner, splayed apart slightly. Then borrowing a trick from the Funny Fireplace post I did a couple of weeks ago, I added a cylinder that passes through both and projects slightly at each side. 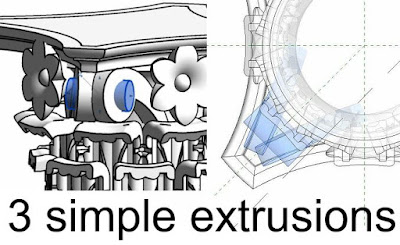 I'm happy with this as a way of tricking the eye into seeing what it expects to see.  The result is a Corinthian Column that weights in at about a quarter of the size of my previous attempt, and to my eye it looks a good deal better also. 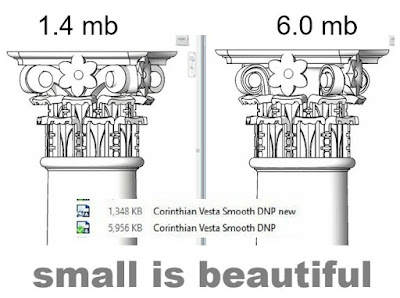 I get a lot of pleasure from this kind of exercise.  The art of "keeping it simple" is very satisfying once you hit on the right approach.  So that's my current best effort at the Corinthian Order: a double-nested planting object (and therefore scalable) that weighs in at around 1.5mb
I will be updating my column collection and re-sharing it shortly. 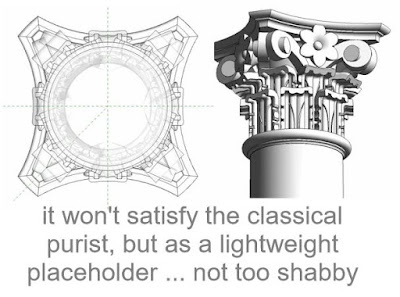