Truth be told, I don't get to use massing & curtain systems a great deal in my day job.  Both Revit and I have been bracketed as practical tools to be employed when projects are approaching the "nitty gritty stage".  I have accepted this as a fact of life, while remaining hopeful that the advantages of the BIM approach will gradually trickle down to those guys over in the corner playing with Sketchup all day. 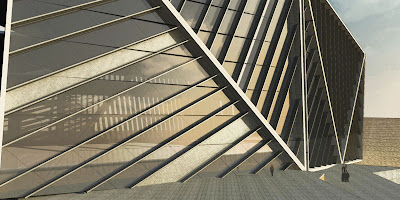 So it's always a pleasant surprise to get a request for help at the earliest, exploratory stages of a design study.  The starting point was an abstract form that has been quickly knocked up in the aforementioned digital cardboard modelling tool.  It's easy enough to import this into a massing family, go to object styles and assign a material to layers.  I wanted something slightly transparent.  It only works if textures were applied "bylayer":  hence the yellow roofing here which failed to pick up the material from object styles. 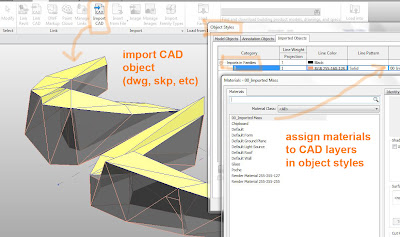 Now you can bring this family into a project and use the "Curtain System by Face" command.   I wanted 2 types of curtain system.  Both of them have big mullions around the edge and no internal divisions.  One is glazed & the other is solid (for the roof).  This is easily set up using the type properties for Curtain Systems, Curtain Wall Mullions & Curtain Panels.

Once these were set up, I zipped around happily clicking on triangles and confirming with the "Create System" button from time to time. 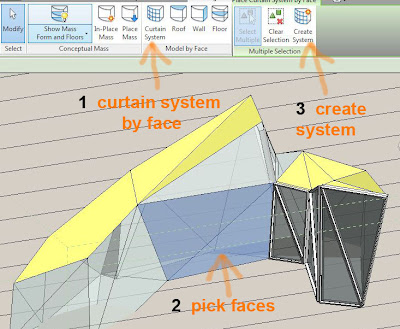 In no time at all you have a form which renders up very nicely, and you can play around with visual styles to your hearts content.

Here's one that I did with a few image processing trips, (smudge stick overlay, desaturate, blurring and masking to simulate depth of field)

All joking aside, Sketchup is a great little program for knocking up triangulated surfaces like this.  In fact that is all it does really.  Everything else is smoke and mirrors in the software to disguise the joins between triangles.  Very clever, but it's just faces.  As a result you can't use the mass to generate floor faces and calculate areas & volumes.  Perhaps you would be better off making the original form in AutoCAD 3D.  Not quite so user-friendly, but you might just be able to convert in into a solid. 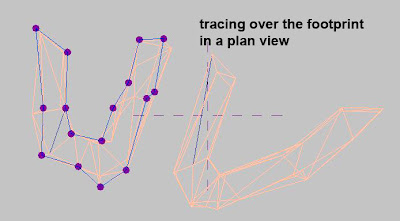 In my case I decided to build a real Revit form using the imported object as a guide.  It was fiddly, but it worked.  Start off by drawing a profile (closed loop of lines) in a top view.  Select this and "create form"  You get an extrusion. I changed the colour of the imported object to all yellow, and made the Revit form purple.  Now with the view set to ghost surfaces, I can see both shapes and how they overlap.

The rest is a matter of push-pulling points and orbiting around all the time as you work.  Slowly by slowly the Revit form can be adjusted to come quite close to the imported object.  The main difference is that the vertical sides will tend to be twisted quadrilaterals.

Back in the project I set up some levels, reloaded the mass family, created mass floor faces and then real floors (using floor by face) 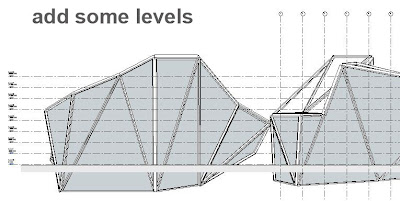 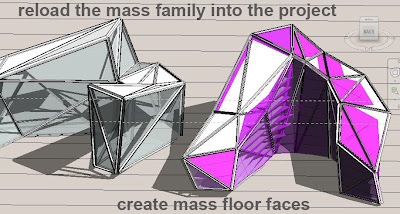 You can schedule these floors to add up their areas, but then you realise that this is not all USEABLE space. The ceiling height tapers down to nothing in several places.

My answer to this was to move the floors up to ceiling level and make them thick enough to fill up the useable space.  Just for fun I made three types of floor to represent different functional areas of the building.  So now you have a diagram that represents useable space as a solid and the floor/ceiling zone as a void. 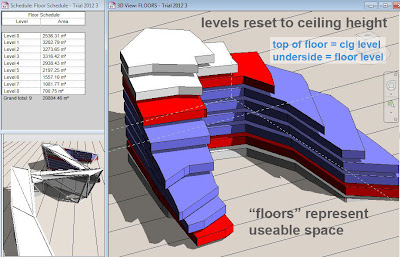 The areas have gone down because these are all now full-height, useable spaces.
This diagram sits quite nicely inside our triangulated skin, but sticks out just slightly in some places where the twisted surfaces of the Revit mass don't quite match the original triangles. 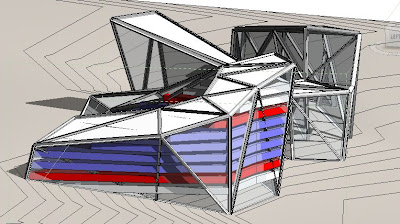 As far as I know, there is no easy way to split the twisted face of a Revit solid into 2 triangles.  You can easily add a triangular surface (which is what Sketchup does)  But that remains separate from the solid mass.  It can be used to make curtain systems by face, but not for making floors and calculating areas.  Within the conceptual massing environment there are tools called "add profile" & "add edge".  Wouldn't it be nice if there was an "add diagonal".  This would allow you to start with an extrusion and gradually deform it into an irregular shape where all the faces are flat and triangular. 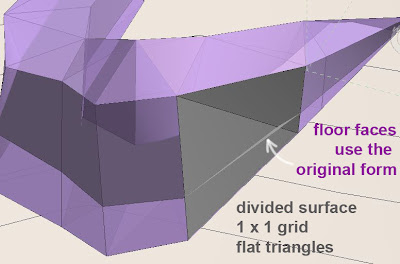 Actually there is another approach which is interesting, but not very helpful.  You can divide the surface using a 1x1 pattern of flat triangles.  At first this seemed promising, but turned out to be disappointing for several reasons.  First of all the mass floors use the original twisted face and ignore the divided surface.  So your floors still stick out through the skin. Also, curtain system  by face selects the whole surface.

Secondly the triangles are actually two halves.  This shows up when you load a component with glass and framing.  It's easier to understand if you increase the number of sides to say 2x2 which will create 2 full triangles and 4 half triangles (if the surface you start with has 4 sides).  In the image abover you can see lots of rectangles floating in space.  These are the profiles I used to define the shape of the framing.  Revit cuts off the framing of partial panels but doesn't hide the profile because this is used in the one and a half sides of framing that remain.  So it shows up even if it is actually located in the part of the frame that has beeen cut off.  You can use a parameter to hide the profile, but you are still left with "missing edges" to the frames.

Thirdly you can't decide which diagonal to choose, which generally makes the difference between convex and concave and affects whether the floors will stick out of the skin or not.  And fourthly, the corners junctions of mullions are harder to resolve than with the curtain system by face tool.
So my preferred workflow for cladding this kind of Revit mass in giant triangular panels is to manually add triangular faces.  You only need to do this for faces that are not triangular in the original mass.

You can choose which diagonal to use, and make further subdivisions at will.  The corner points remain attached to the original mass so you can continue to manipulate this, reload into the project and update curtain systems.  It's a workaround, but it gives you a way to model these kinds of spiky angular forms directly in Revit.

Later on  you can add mullions and panels into your curtains system as shown in my final image. 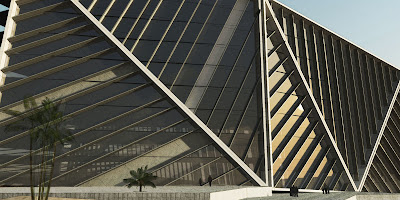