First of all, back to the curtain system and spiky shapes experiments.  I spent a weekend playing with the new Vasari.  Cool stuff, moving around freely in perspective view and all that.  I tried out different ways of getting the triangulation.  Version one started with an extrusion.

The dark brown lump is the sketchup model Iwas trying to match.  You can get to something roughly equivalent, but then you get stuck. Can't just choose to split a triangle anywhere you like.  The third image is a solar radiation study, one of the features built into Vasari.  So what about a loft ?

Series of polygonal profiles placed on reference planes.  Try to loft them all at once and you get these wierd curves.  Not the intention.  But if you start with two and then keep building the next one off the face of the last it's better.

You can go back later and adjust any of the polygons later using edit profile.  But you just end up with a different set of limitations.  The conceptual massing environment wants to keep all this enheritance going, so shapes know their entire evolutionary history.  This is great when you need it, but if you want to do free-form triangles, sketchup style.  Not the right tool for the job.  But you can make some interesting forms, and then put them into a wind tunnel.

Then I got this idea of placing points on the sketchup vertices and using these to build triangles.  Keep a couple of windows open with different visibility settings and it's quite easy.  Well not too hard. 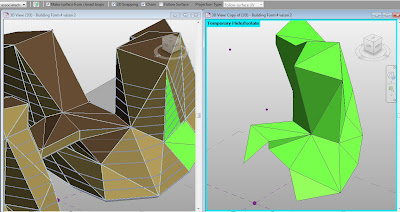 At some point I found myself switching off the new perspective mode.  The geometry is confusing enough as it is.

I guess it took me a couple of hours to get all the way around.  But it's a pretty close match.  Sadly only surfaces, so no good for mass floors.

But you can built curtain systems off the faces, and have lots of fun with the wind tunnel.

Later on I put floors in manually, applied curtain systems and got carried away with the ecotect tools.  Had to go into Revit for the curtain system and there was a warning on bringing it back into vasari, but
it carried on working. 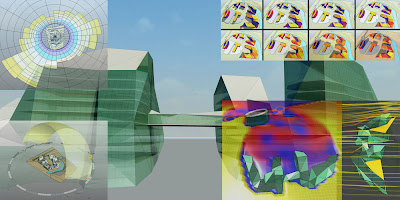 That's the farthest I've ever gone with Vasari and a great learning experience as usual, but still haven't conquered the workflow for getting this kind of shape into Revit as a solid, fully functional massing family. I had another go with the step-by-step lofting technique and made some progress. 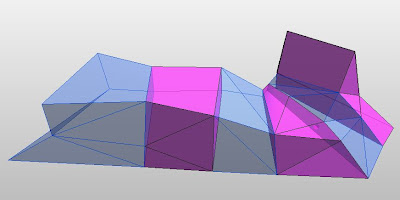 I was actually building a pink solid using the green surfaces as a guide.  Careful use of subcategories to control materials and visibility in different windows. It's not right, but I was getting much closer this time.

Luke over at "What Revit Wants" posted lots of interesting links to ways of moving between mesh & solid, rhino & revit, etc.  Maybe there's something in there to help.  But coincidentally I found myself in autocad today and realised that I am totally out of touch with the solid modelling capabilities this now has. 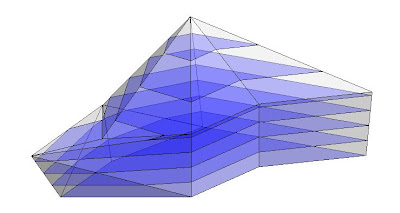 I only spent about 20 minutes on this and the form is totally random, but it's immediately obvious that this is a suitable tool for creating spiky triangular geometry that will come into revit as a solid and take mass floors etc etc.  I am a good seven years adrift from Autocad, and find myself grumbling and cursing whenever I have to use it.  No longer interested in doing the kind of drafting that consumed more than a decade of my life.  But maybe I could get excited about the solid modelling tools.   Who knows ?
Posted by Andy Milburn at 9:19 PM