A recent post took me back to the traditional sliding sash windows that I so admired as a young man engrossed in the practicalities of building work.  I decided to set about building a typical sash window in Revit ... piece by piece. 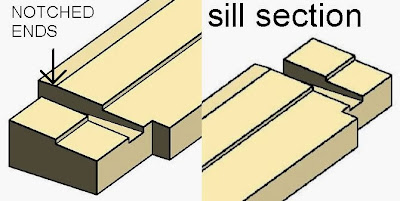 Let's start with the sill section.  A nice chunky piece of solid wood with a fairly simple section.  You need to cut some notches out at each end to take the linings that define the boxes.  These boxes house the weights.  In the windows I dealt with, the weights were always cast iron, but we'll get to that. 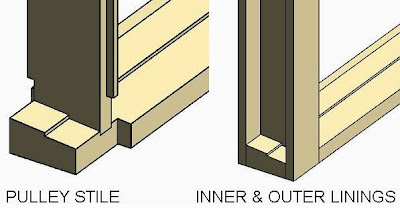 Between the linings is the pulley stile, rebated down both sides to fit into grooves in the linings, and with a groove down the centre for the parting bead.  This is a slim section of wood that serves to keep the two sashes apart and guides them as they slide up and down.  The parting bead is removable to enable maintenance operations such as replacing sash cords. 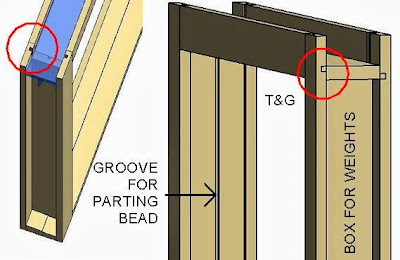 The sashes themselves are moving parts, so they need to be quite robust.  You don't want the joints to shake loose.  Hence the use of mortice & tenon.  The weak point of this kind of joint is the end grain directly above the mortice which can split and open up the joint.  The best protection is to "leave horns", extensions of the sash stiles which are often given a decorative shape. 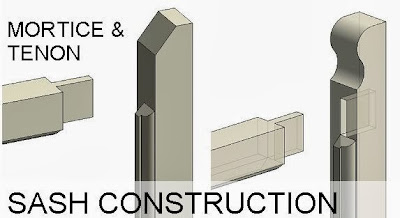 I'll come back to the mortice & tenon in another post, get into wedges etc, but for now let's move on. My model is coming together quite nicely now.  You can get quite a good idea of how the parts fit together.

Generally speaking, stiles are vertical elements, rails are horizontal. Double doors have meeting stiles, sometimes rebated so they fit together nicely.  Sliding sashes have meeting rails, which also could be rebated, to avoid a wide open gap like the one below.  Notice the stiffening blocks to support the linings along the top of the frame. If you think about the way the parts fit together you'll see why this is necessary. 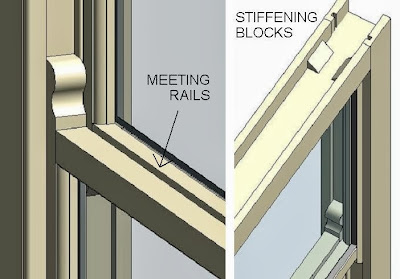 Once the sash boxes are fitted into the wall, we will need a way to access the weights.  Cut out a pocket with a half-lap joint at the top and a splayed joint below.  I've actually put this on the wrong side by mistake.  As shown below it's exposed to the weather. 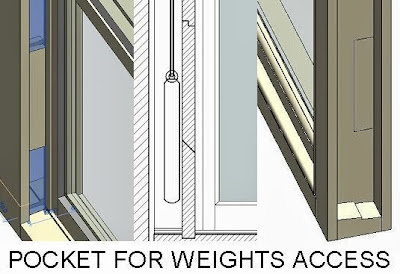 Made myself a little nested family to represent the pulleys.  Notche out a housing for these in the pulley stile. 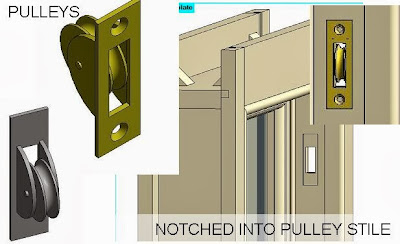 Fit the outer sash first.  The sash cords are nailed into a groove in the side of the sash.  We used to use short galvanised nails with a nice flat head.  Once upon a time the weights would have been lead, but all the windows I ever worked on used mass-produced cast-iron weights.  Slot the parting beads into place to hold the outer (top) sash then you can fit the inner (bottom) sash.  This is held in place by the staff beads.  These have a nice bull-nose profile which leaves a convenient slot where you can fit a screwdriver to level them out again for future maintenance. 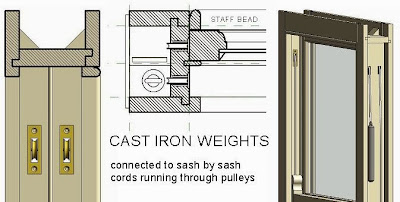 Now you wouldn't want to make a detailed model like this to insert into a model thirty or forty times.  I'm doing this as a research project, for didactic purposes, but it could be a "typical detail" file in a real project.  The window families deployed in the project would be somewhat simpler in their modelling, more use of symbolic lines. 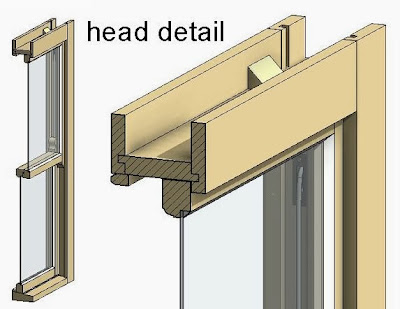 You can see the rebated meeting rails clearly in the image below, and the linseed oil putty creating a weather seal around the glass.  The glass is first bedded in putty, then held in place with small glazing sprigs (nails).  The outer putty is applied and cut off clean with a glazing knife. 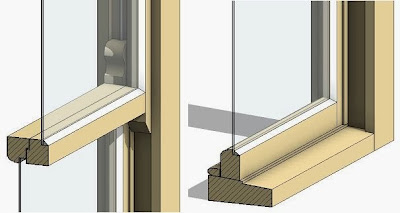 Moving on to how these windows fit into a wall, my example is a typical Victorian or Edwardian terrace from the north of England.  Housing for the masses during Britain's industrial heyday.  Construction is load-bearing brickwork.  A "one brick wall", ie 9 inches thick, equal to the length of one brick.  The widow sits on top of a shaped stone sill.  A rebate is formed in the other 3 sides of the opening. The window sits snugly into this rebate so that most of the frame is concealed.  The outer lintel is stone and often has a bit of decorative carving.  The inner lintel is timber. 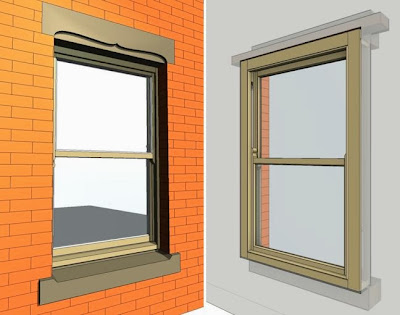 In the next image you can see the internal plaster going on to the wall.  This will finish flush with the frame and then architraves will be applied to cover the junction.  In the houses I worked on (and lived in) the plaster was black, blast-furnace slag mixed with lime.  That was the thick levelling coat.  To finish, a thin skim coat of lime putty.  That was in the olden days.  For our renovations we were using gypsum plaster.  By the way I'm using the "Parts" feature to split the wall into its separate layers and cut back the inner plaster.  It's a great feature when you need it and living proof that the factory is still busy extending the capabilities of our favourite software in significant ways.  (I slipped that in for the moaners who think that the annual releases aren't exciting enough :-) 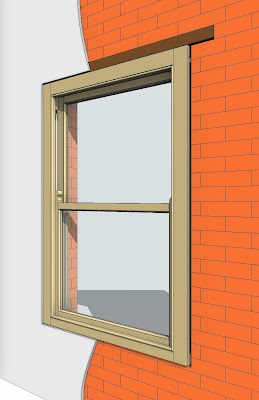 That's as far as I've taken it.  Not quite finished.  Shows the power of a BIM application like Revit.  If I had drafted this in 2d, the results after a couple of hours would be more impressive, but after a full day the BIM advantage is kicking in and you're starting to get "views for free".  And of course when you discover mistakes or change your mind it's much easier to make changes and update the whole drawing set. 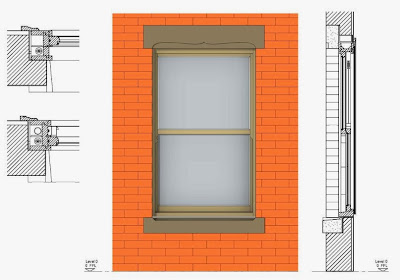 I'm going to finish with some sash windows from my photo archive.  There are examples from New York and London in there, plus a couple of other towns.  Windows built to last, both in construction and style.  I love them, and I love knowing how they work.  But there is always more to learn so please send in your comments, corrections, snippets of knowledge about how things were done in different times & places. 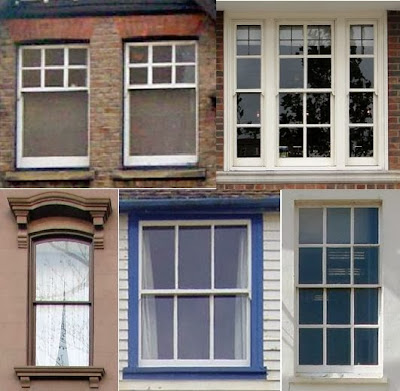