EGG ON MY FACE

Let's hit the head.  And as far as possible let's stick to native revit geometry (aka Vanilla)

I started with what I like to call the Universal Egg, a parametric revolve built from partial ellipses.  You can vary the overall size, the slenderness and the eccentricity of this egg. 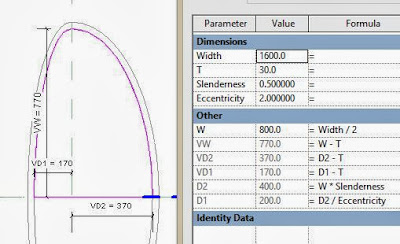 Next I made it hollow.  A smaller copy of the same revolve, but a void this time.  Control the difference between the two with a parameter called T (stands for thickness) 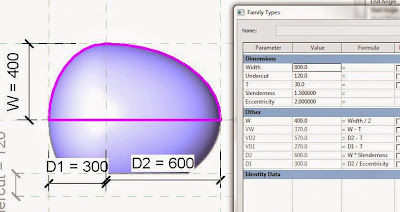 Now a cranium is not a full egg, it needs to be open at the bottom where the neck comes in, so I need an undercut parameter, bit like a door. So I rebuilt my little egg, but the ref planes and labelled dims on the outside where I could see them and set the undercut in relation to the "width"

Now I have a nice little collection of shapes, some of which may be useful for making animal heads. 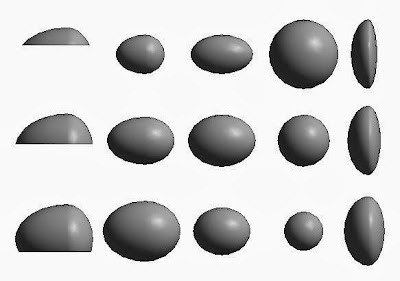 We have a brain case, what about a face, a muzzle/beak

Let's start with conventional geometry.  First thing that springs to mind is a blend based on 2 triangles.  This will create a nice upper beak if long and thin.  A plausible flat face when short and fat hopefully.  Set up ref planes.  The back will always be wider than the front presumably, in both width and height, call that W1 & H1.  So the front is defined by W2 & H2.  Make all parameters instance based so we can copy and vary.  Give it a depth control D and flex. 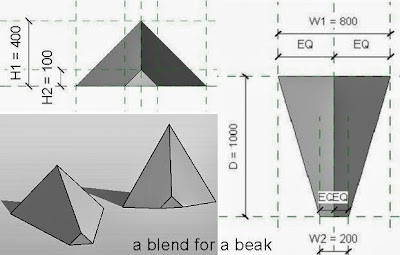 That's a start but perhaps a bit too stark.  To curve the sides I chose to use splines.  Lock their ends and they will scale proportionately.  Seemed easier than looking for centre points to lock an arc in place.  Also  it will be easier to manipulate the curve later on if we want more bulge.  We could even add more control points for greater complexity.

Took a couple of goes to get the locking right. Results look good though. 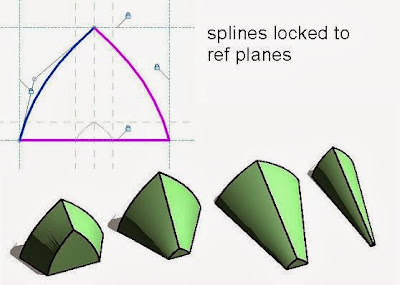 We need eye and nose sockets.  Easy enough to create ref planes half way between outer and centre.  Decided to start with cylinders (Keep It Simple Stupid)  Made the eyes solid intending to convert them to voids as soon as I had tested the flexing, but decided a solid eye was the simplest case.
Tried these out in a project environment.  Nice variation. 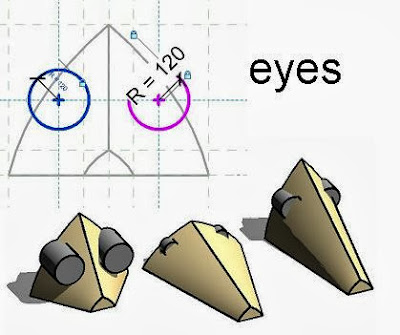 Nose had to be a void, and once again started with a cylinder.  The interaction between the cylinder and the ridge of the beak gave me pleasantly unexpected results.  Happy accidents, always welcome. 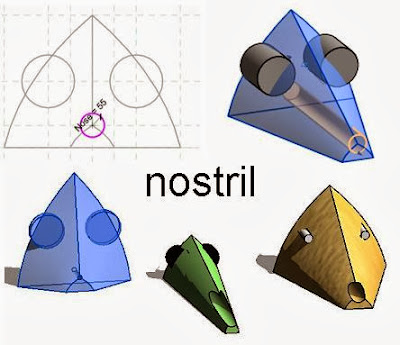 You've probably noticed the resemblance to African masks by now.  I suppose this is inevitable once you start making geometric abstractions of faces in 3 dimensions.  I expect we can probably exploit this association to good advantage as the work progresses.  African masks were a huge source of inspiration for the cubists and the modern art movement in general.  They were searching for new approaches to art in the age of photography.  We are searching for new approaches to design in the age of digital 3d.

FLW displayed his prowess by imagining forms in his head and representing them in beautiful hand drawn perspectives.  These days anyone can outsource photo-real perspectives by the bucket load.  So where does design talent lie ?  The modern movement in art explored various avenues, but Abstraction surely played a central role.  How can you transform something into a simplified essence that still speaks of proportions, colour, emotions, beauty, unease ? 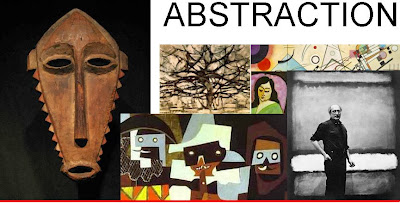 Picasso, Mondriaan, Pollock, Rothko: it has been a rich vein to explore.  BIM is still an infant, possibly approaching adolescence.  We have hardly started to consider the implications on Design with a capital D.  Computational Design, the wilful complexities of Gehry ?  Those are contributions at least, but I think we are missing something deeper, and I would be looking to the simplicities of abstraction for some of the answers.  Architecture is not just about visualisation.  Not just a case of "let's invent some new shapes that haven't been done before".  When you stop to think about it that's all a bit shallow.  Architecture is a response to human needs and activities.  BIM has been tackling that from a very technocratic perspective.  Computational design has been generating funky forms.  But what happened to the integrated practice of commodity, firmness and delight ?  Where are the BIM processes that allow us to manipulate these bigger issues as simplified abstractions & make those leaps of imagination that characterise great architecture ?

So let's abstract a jaw bone.  Still working in vanilla.  Ref lines locked to ref planes.  Pick these to create paths for sweeps. 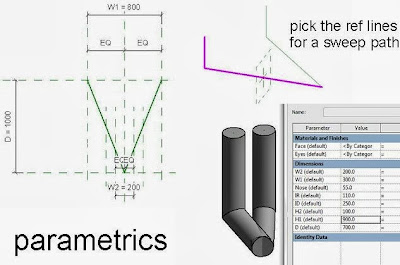 put them all together manually in the project environment, with egg head brain cases and it's starting to look usable.  Human, stork & bear perhaps ?  By the way, this exercise on its own qualifies as some kind of Halloween head-carving.  Abstract representation of heads based on parametrics.  Just a bit short on the vegetable side, but certainly getting a little spooky. 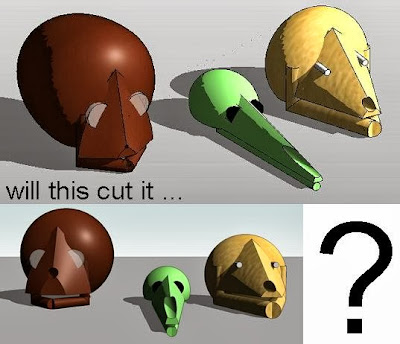 Actually I need to work more on the parametrics now, bring these 3 parts together into a single head family & simplify the parameters available to the end user.
Posted by Andy Milburn at 7:28 PM