BULL IN A CHINA SHOP

That's me.  Plugging away at my current hobby horse.  So my eyes fell on Tivoli Corner, and first of all I had to do a quick job on the amphora.  Actually it's fine as it is for most purposes, but my perfectionist side was peeping through.  If you look carefully at the handles the curves are not quite smooth.  To be fair the same goes for Soane's drawing :) 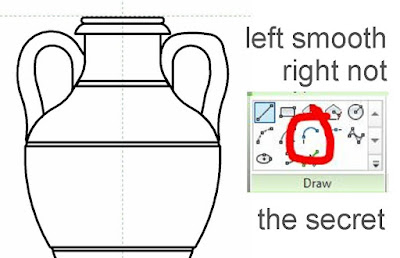 There is a wonderful tool in Revit's drawing set that is often overlooked.  It's in the middle of the second row, and it's called "Tangent End Arc".  That's the secret to drawing smooth curves with consumate ease.  Just keep going and every curve will be tangentially to the previous one, absolute magic. 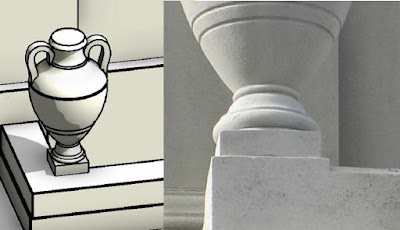 I also fixed it to have a square base which is the usual thing, and is visible in my site pics.

But what I really wanted to tackle was the Bull's Head detail from the freize.  This only features at Tivoli Corner, in fact the friezes on either side don't even have the key pattern, quite plain.  Makes for a nice contrast, which I'm guessing was Soane's intention. 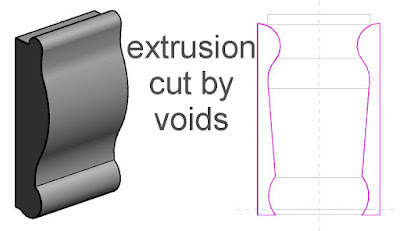 Once again I'm looking for a simplified abstraction that will do the job at coarse to medium scale.  And it's a sideways extrusions cut be void extrusions drawn from the front.  After that we add some eyes and nostrils simply by editing the sketch for the sideways solid.  Then the ears are just tubes: an extrusion sketched in front view. 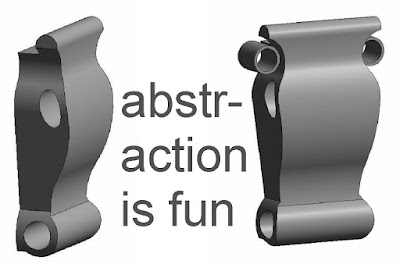 This family will attach itself to a planar face, but it doesn't do so well on the curve, can't pick up the tangent properly.  That's OK we just place them on a horizontal work plane, nudge the first one into position, then array this radially. 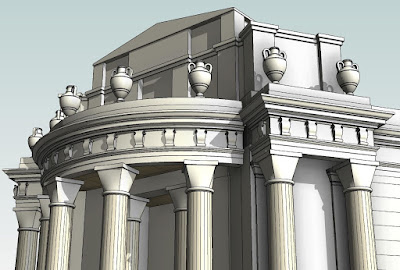 In fact this is a wonderful setting for Revit's dynamic array feature.  I know there are 4 items between two columns so I just set the second column as the end of the array and type in a number 4.  Then you can just type in a new angle and a new number of items.  Rotate the whole array about its centre point as required.

Which brings me to the attic.  I quickly knocked up a placeholder family for this.  You can see it in the perspective above.  It's lacking in detail, but we have some fairly good reference material.  Here is a presentation drawing that Soane had done.  Notice there are no vases on the curve. 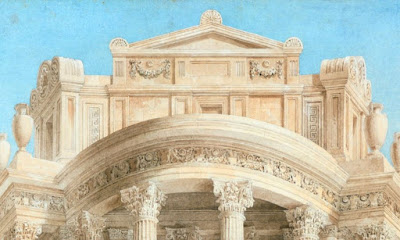 Then there is a very grainy photo which does have vases on the curve.  Did Soane do this, or were they added later ?  The current ones are definitely by Baker, he made a lot of alterations to Tivoli Corner.  But the grainy photo predates his work. 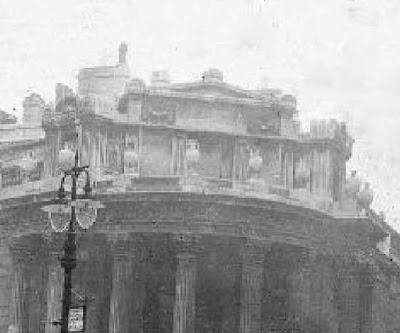 For the attic itself we have a pretty good drawing.  I used this for the placeholder family and it's still embedded in there in case you want to pick this item up and run with it. 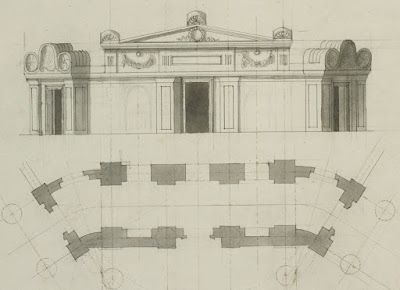 Here is a shot of the family geometry.  I didn't get much further than this.  Just started addin a sweep, but it's very crude. 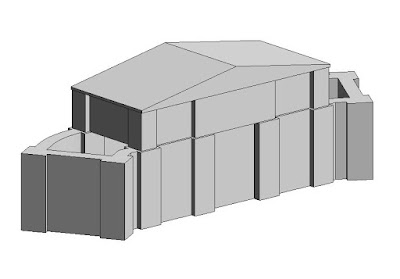 Here is the study sheet that I did for the whole process.  You can see there is a garland between the bulls heads that also needs to be abstracted / simplified and incorporated as a family.  Any volunteers ? 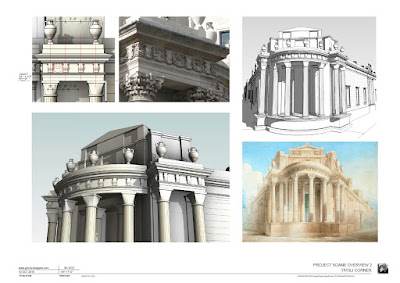