I spent most of the weekend creating a series of diagrams that explore & explain the extraordinary 45 year journey that John Soane undertook in his quest to transform the Bank of England from an ad-hoc collection of disparate parts into a coherent whole. 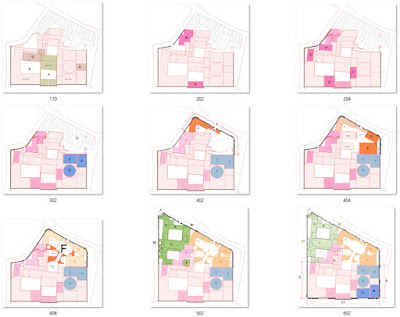 This was my 3 day journey, taking an assorted collection of source material and organising in to make it more useful and accessible to myself and to others via Project Soane.  In the process I once again deepened my understanding of Soane's achievements at the Bank. 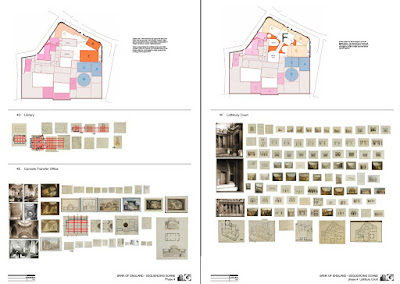 He inherited the work of 2 previous architects.  George Sampson had built the central block some 50 years earlier and Soane respected its simple Palladian style.  It had inhabited a deep, narrow site in the middle of a city block.

A 3 storey gatehouse led into a courtyard revealing a single large rectangular Pay Hall at the far side: a triple volume space with 3 stories of subsidiary offices behind. Behind this were outhouses and cellars where gold was kept.  Deliveries to this messy backyard area came down a narrow winding lane from the East. 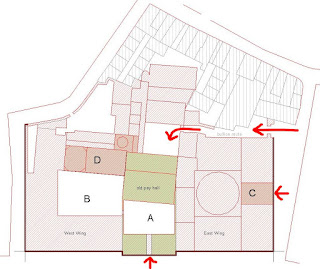 Then came Robert Taylor, a stone-mason & sculptor turned architect whose death created the opening for Soane.  It seems that Soane was not impressed with Taylor's contributions.  First of all the bank bought out the rest of Threadneedle Street to the East and thereby secured exclusive rights to the deliveries lane.  Taylor built a high screen wall to close of the two exposed sides of this roughly square block of land, a somewhat stiff and pompous affair with lots of columns & pediments but no windows. 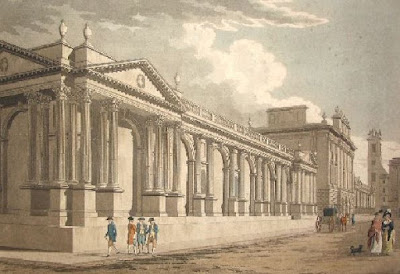 Behind the screen he jammed in a solid mass of banking halls, 4 of them arranged around a central rotunda whose interior space was inspired by the Pantheon in Rome.  These rectangular halls were top lit with elaborate timber roofs and multiple domed rooflights.  It's difficult to see how the waterproofing could have worked, and apparently it didn't.  Soane took over a collection of rotting timber roofs supported on a forest of columns. 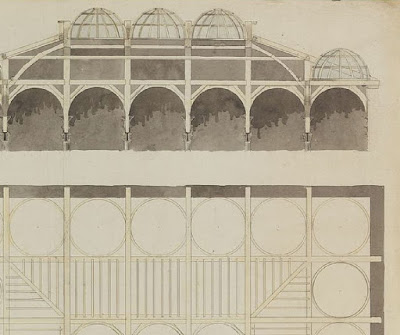 The bank expanded rapidly and soon took over the rest of the street to the West.  Taylor enclosed this with a matching screen wall, but behind this the treatment was rather different.  Here he built banking halls on two sides, creating a pleasant open courtyard.  Closing this off on the Northern side was the Court Room Suite, essentially the corporate board rooms where the Directors would meet to discuss serious business. 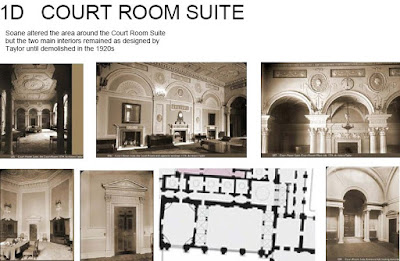 Behind all this was a triangular yard, another back-of-house space for left-over bits and pieces, including the privies.  Right at the back of the original plot Taylor jammed in a couple of extra structures including a 3 storey library, presumably lined with shelves full of ledgers, records of a century of doing business, and a chief cashier's office. 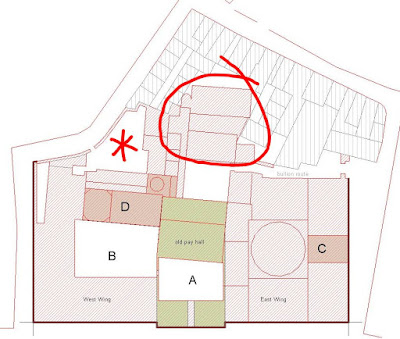 The bank was in the business of borrowing money from anyone with cash to spare and passing it on to the government who spent it on warfare.  Their core expertise was to manage funds responsibly, pay dividends on time and earn the trust of lenders and borrowers alike.  England was clawing its way to the top of the pile and the bank's contribution was essential.  Clearly they were very good at what they did. 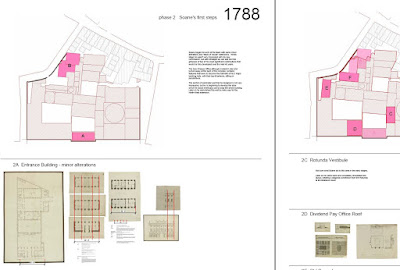 Soane's first 2 or 3 years were spend tinkering and learning, building mutual respect, formulating strategies.  The directors had a new man, perhaps more like themselves than Taylor had been: self-made, hard-working, meticulous; but also bold and imaginative, not afraid to chart a new course.
Apart from minor repairs and alterations he built some new structures in the triangular yard behind the Court Suite and a screen wall along its outside edge in a far simpler style than Taylor had used.

These were modest efforts which were to be swept away over the next 20 years or so as the Bank continued to expand, but for me they seem to be crucial testing grounds for his ideas.  Here we see the first tentative statement of 2 major themes that informed his later work.  Firstly the screen wall, classically inspired, but simple and understated: horizontal in emphasis, with liberal use of parallel incised lines.  Secondly a rectangular hall, top lit with a central circular lantern carried on pendentives; plains surfaces, sparsely decorated. 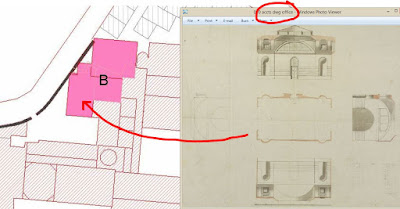 I am calling everything before Soane "phase 1" and these first tentative steps "phase 2".  Phase 3 is where John Soane hit his stride.  Between 1792 and 1795 he rebuilt 2 of Taylor's banking halls and refurbished the Rotunda, as well as surveying the remaining properties at the rear of the Bank. 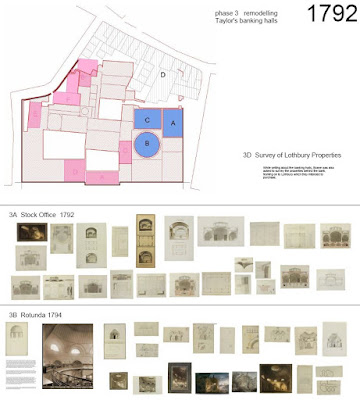 The Bank Stock Office is seen by many as his crowning glory, or at least the quintessential Soane interior.  Would he agree ?  It was heavily criticised at the time and later on his work became more conventionally classical and more richly ornamented.  Was this a loss of nerve?  Perhaps, but I think it had more to do with the budget available and the type of space being designed.
Just as the Bank was able to tailor its instruments to all comers, from wealthy investors to the man in the street, Soane could design anything from a stable block to a palace and adapt his style to suit.  Nevertheless the Stock Office is a remarkable achievement, more so being the first in a series and fortuitously the one that could be recreated in situ.  Luckily its name is also straightforward, as is that of the Rotunda.  The third space in phase 3 is harder to label.  The words "old" and "new", combined with 3 & 4 percent, are applied to the remaining 3 banking halls in different ways at different times, along with optional terms like "dividend" or "reduced annuity", leaving me completely baffled.

Frank Yerbury, who took photos in the 1920s just before the bank was demolished used more distinctive labels.  I have adopted these so as not to go mad.  Therefore the third space is the "Shutting Room" and it seems a little nondescript: basically a copy of the Stock Office but with some of the more distinctive features removed. 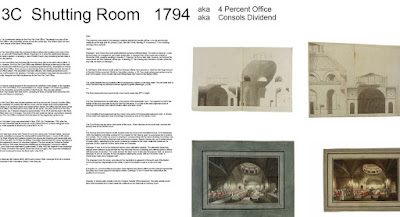 Gone are the lunette windows in the 4 corners and the insistent ruled parallel lines.  Loss of nerve?  Tight budget?  Deliberate downplaying of a secondary space?  I know not but they are interesting questions.

Phases 4, 5 & 6 represent the bulk of Soane's journey at the Bank: 40 out of 45 years.  By the time he had finished there was little left of Taylor's work and Soane had left his imprint on almost every part of the Bank, both inside and out.  I had not initially realised how much of the 1833 Bank belonged to Soane, nor how fascinating the story behind his Odyssey would become. 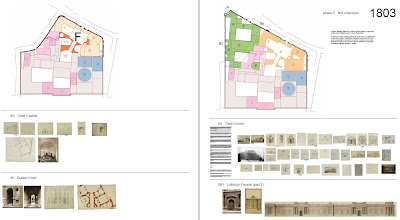 Are we only interested in the well-known spaces: the photogenic banking halls?  Are we here to showcase our skills as architectural modellers?  Do we aim to dazzle with detail?  Not me.  I am an architect first, and a modeller/draftsman second.  I am doing this to better understand the design principles informing Soane's work, to unlock a narrative deep within.  It's a whole, made of many parts, with intricate cross-connections in time and space.

One weekend has helped me to put this into perspective and to organise the available reference material as you might order a century of banking records on numbered shelves in a Consolidated Library.

There is a PDF for those without Revit 2016.  Some of the images will not be very clear but it gives a good overview. 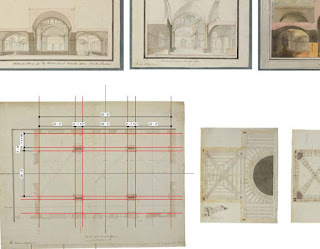 Why did I use Revit to create a container for jpegs?  And why are my diagrams all 2D drafting?  Well it's an experiment, a work in progress, a brdige towards future modelling, a shortcut ...   Assembling images on a drafting view in Revit facilitates simple dimensioning studies.  There are always discrepancies and some of the dimensions are difficult to read, but that's part of the fun.  It makes me think, ponder, puzzle, interpret, learn. 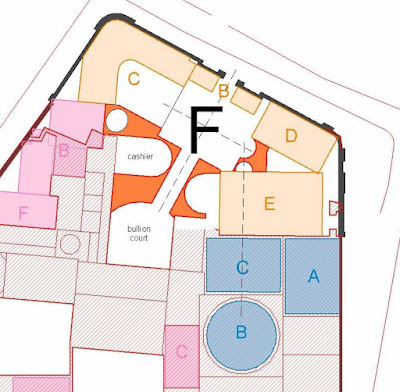 Ultimately, placing all these images in a Revit container is much more powerful for me than just keeping them in folders.  I can zoom, pan, annotate, overlay, rearrange ... and at any point in time I can launch myself into 3d at a moment's notice.

So I hope this will make the resources more accessible to us all and I hope some of you will be inspired to create more stuff and upload it.  Most of the images come from the Soane Museum online archive, which is a wonderful resource.  I hope I haven't broken too many rules by incorporating them into my own compilation.  The copyright is theirs of course.  Thankyou, thankyou, thankyou Soane Museum for being there and for continuing the work that he started. 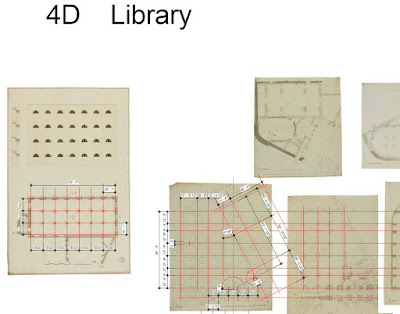 There is so much to model on this project.  I do hope the work can continue for much, much longer and that we can persuade some schools of Architecture to get involved.  I really feel that we have barely scratched the surface so far, but for me at least the experience has been mind blowing.
Without BIM I never, never, ever would have come so far in just a few weekends.  So thankyou also to Autodesk, to HP, Nvidia, Case, cgarchitect, RAMSA & of course the museum.

Whatever happens going forwards, you have enriched my life. 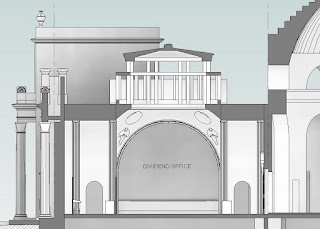