DOWN IN THE DUNGEONS

Soane's father was a bricklayer and died while John was still quite young.  Like many self-made men he had high hope for his own sons, too high perhaps.  He seems not to have know how to accept them on their own merits.  The older son, John, was plagued by ill health and died young.  George was a rebel, gambled, ran around with the ladies and spent some time in debtors prison.  Has father refused to bail him out and the two never reconciled.  It's a sad and very human tale, brought to mind by my work on the cellars at the bank. 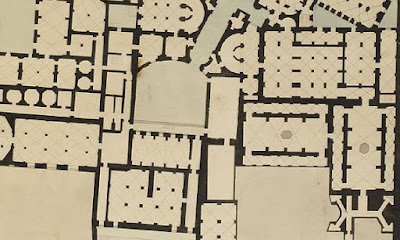 There are several drawings that show these and they were quite extensive, storing items as diverse as gold and coal as well as forming a firm foundation for the structures above.  I was inspired by Alberto's splendid model of the Stock Office substructure to make my own attempt. 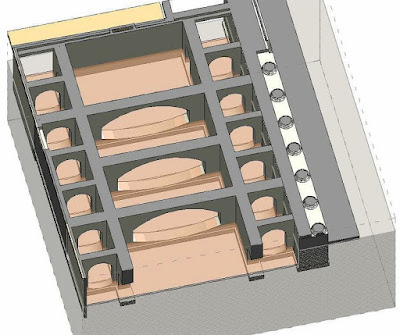 What I had not realised at first was that there are very substantial walls running north-south.  Behind these run a series of square compartments, seven on each side.  In the middle are 4 much larger rectangles.  All these spaces are covered with groin vaults. 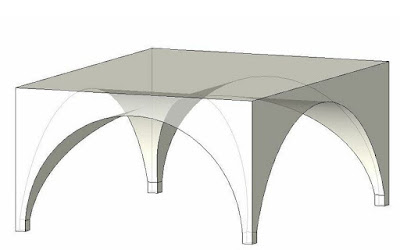 It was easy enough to make the arched openings. Note that these have arches both top and bottom so as to be  fully braced and stable.  The bottom arches are eventually covered over with backfill and the paving of the cellar.  There is a very nice drawing made by one of Soane's pupils showing these lower bracing arches during the construction process.  Perhaps we should go back to the practice of having young architects sketch site activity by hand.  It's a wonderful way to learn and understand.

I decided to make a parametric groin vault.  My maths proved too rusty to derive the formula for the radius and I had to look it up.  There are two radii of course, both derived from the same rise.  It's a fairly successful family, but not quite perfectly stable.  There are variable extensions on all sides and it breaks when these get too small.  If someone wants to pick it up and improve on my efforts I would be very happy.

It would be nice if the extensions could go right down to zero.  Sometimes you need arched extensions at the sides, sometimes the groin buts right up to the wall.  Actually when I think of it, there are normally extensions on two sides, but not in the other direction.  Probably we don't need the bottom extension either. 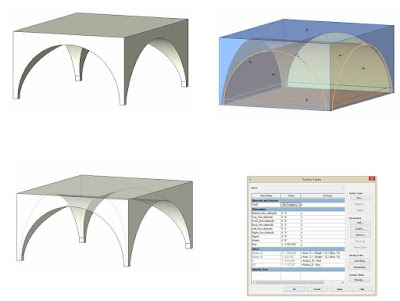 The compartments at the side effectively form long corridors accessed from the central space by doors in the corners.  Sometimes there are archways leading into adjacent spaces. 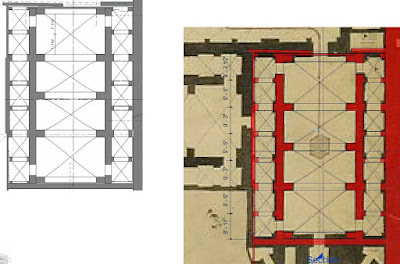 For me this was time very usefully spent.  I now have a much more detailed understanding of the foundation systems being used in Soane's day.  I haven't yet attempted to model the voids in the floor that formed part of a Roman-style heating system.  Don't fully understand this to be honest. 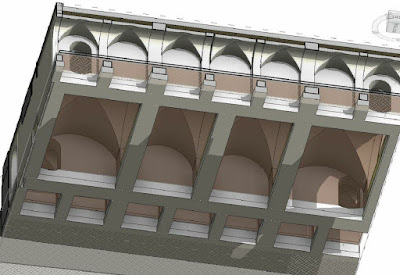 Also, I am showing the whole floor as stone flags, whereas it appears that the sides where the clerks worked behind the desks had timber decking, installed over the brick vaults.  I assume this was seen as a friendlier surface for the staff who were in there day in and day out, whereas the stone flooring in the centre would cope better with public traffic: people coming in and out all day with wet and dirty feet perhaps. 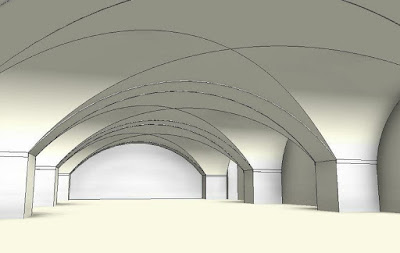 One find day I will extend this treatment to the other banking halls and beyond, but it's not the most urgent task on my list.  One thing is puzzling me though.  At present the stock office floor is 3 steps higher than the vestibule.  This shows up very clearly in my photographs.  But was it like that in Soane's day ?  I am starting to think maybe not.  Perhaps there was some technical reason why they needed to do this when they reconstructed the Stock Office. 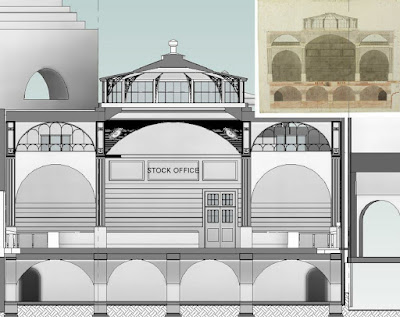 As far as I can tell, Soane's drawings show all the banking halls interconnecting on the same level.  I'm going to throw in one last screenshot of those dungeons.  I have to say that they are much more exciting than the foundations we build today.  Something very satisfying about the close packing of the bays, almost like plant cells or even soap bubbles. 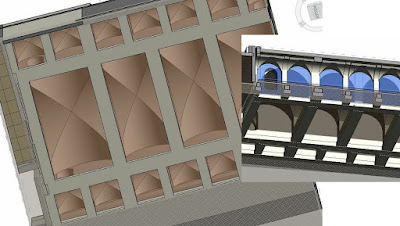 Drawing to a close now, I managed to push the Dividend office a little further.  No glass in the windows yet, and there are supposed to be paired caryatids up in the lantern, but you get quite a feel for the space, and the free-flowing curves that he managed to achieve in the last two banking halls. 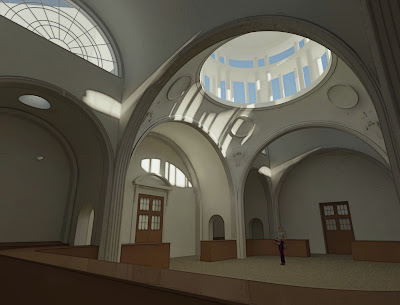 And here's a cutaway of the Colonial Office, showing how it relates to Taylor's entrance vestibule and to the screen wall.  It has the same flowing arches, but the semi-circular windows are treated differently and we have Ionic columns instead of caryatids up on high. 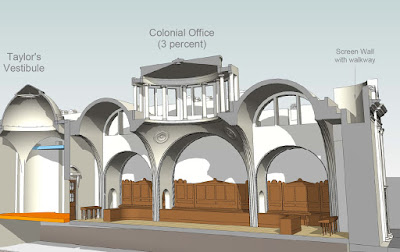 This was all done a couple of weeks back.  I uploaded the file recently.  The plan is to focus on the perimeter next, try to bring it up to much higher level of detail.  But you never know what will happen once my BIM pencil starts wandering.
Posted by Andy Milburn at 7:47 PM