I had never heard of Anthony Bourdain until a few days ago, and I have nothing to say about suicide, but I have been reflecting on my travels, and I do think there is value in sharing stories and looking for meaning.

I have always regarded drawing as a tool for asking questions, probing deeper and paying closer attention.  So sketching over some of the photos from my trip to Volterra seemed like a good way to try out the new "all free" Autodesk Sketchbook.  I started on my phone (Note 8) and was thoroughly impressed with what can be achieved on such a small screen. The user interface on the Android version is excellent in my view, and I love the sPen. 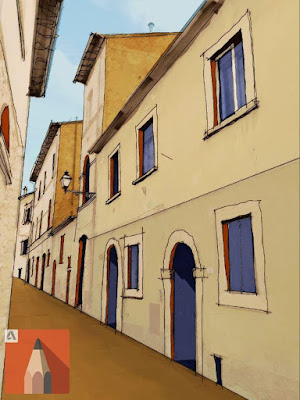 My first drawing is very loose in style, kind of a pen & ink feel.  The perspective is quite dramatic, converging towards a distant point then disappearing round the corner to points unknown.  I was thinking in traditional "art" terms: composition, rhythm and balance; areas of flat surface contrasting with areas of detail.  These are very abstract ideas, but as I work I notice incidental details.  I become aware of the typical street lights projecting out from the wall on scroll brackets.
Before the trip, I had started to think about the windows and even begun to make some Revit families.  There is a lot of variation, but also some extremely strong, persistent themes.  Ground floor windows are almost always treated quite differently from the upper stories.  The main factor seems to be security: sturdy bars forming a grid of squares or diamonds, or occasionally more elaborate scrolls and radial arrays. 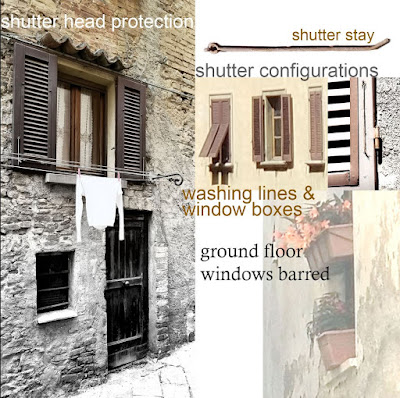 Ground floor windows have solid shutters, opening inwards, secured from the inside.  By contrast, upper windows have louvred shutters that open out.  These are fascinating contraptions.  Some of the louvres are fixed, some enclosed in a secondary frame the hinges out like a flap when the shutter is in the closed position.  So you can have the shutters wide open with the glazing closed, or the glazing open with the shutters closed, but the flaps up to admit more light and air.  Or you can play with the permutations to suit the situation.

It's clear that many of the residents of Volterra live in apartments, so the window a point of contact with the outside world.  Domestic life spills out in the form of washing lines on pulleys and little rows of plant pots on the window sill.  How far does apartment life trace back? To medieval times, late Roman, early Etruscan?  Would it be possible to outline the evolution of urban housing in Tuscany over the centuries? 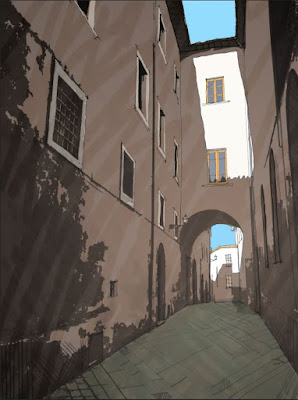 My second drawing was chosen for its dramatic pattern of light and shade.  I started with a simple boundary and areas of flat fill to represent deep shadow and sky.  Later on the flood fill accidentally picked up patches of darkness in the lower walls.  These two moves conspired to tilt the image towards a comic-book style, emphasised by the powder blue and yellow.  No shutters here? I guess the geometry of the tall narrow alley keeps the windows in shade most of the time anyway.  Is this a general rule, or a lonely coincidence? 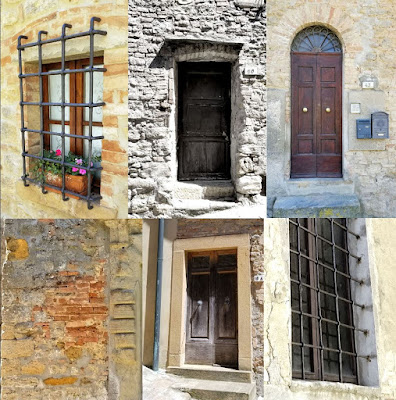 Volterra gives the impression of being a single organism.  The palette of materials is restricted but quite rich.  Walls are often a wild and crazy blend of stone and brick, perhaps with patches of crumbling stucco, and accents of dressed stone.  Doors often come as a hinged pair, even where the opening is quite narrow.  I love the traditional blacksmith technique for locking a grid of bars together like threading cotton through the eye of a needle. 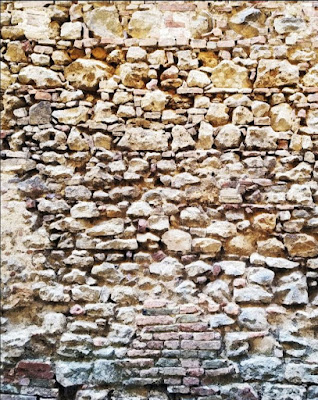 The mixture of stone and brick is sometimes a random effect over time as window openings are moved around, sometimes the calculated insertion of brick string courses and relieving arches giving structure to random rubble walling. It's not unusual for the lower courses to be dressed stone, with un-coursed rubble above.  It's difficult to know how much of this rich textural variation was meant to be seen and how much results from stucco falling off, or owners never quite finishing the job. 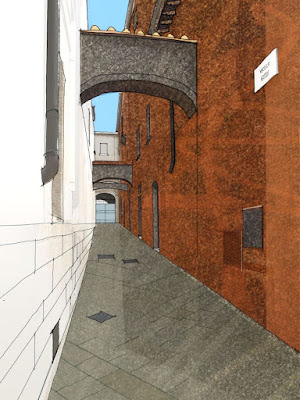 I'm not sure how to characterise my third drawing.  I used my iPad this time and it became a highly abstracted study in textures.  Once again I was attracted by the drama of the perspective.  The alleys are often bridged by arches, sometimes with linking rooms above, but here apparently structural buttresses, resisting internal thrust.  But why?  You can see a couple of rainwater pipes here, normally copper, descending from half-round gutters.  It seems to be normal practice for the downpipes to disappear inside the wall at ground floor.  Is this to protect them from damage?  Presumably they drop straight into an underground stormwater system.

Water collection and storage was surely crucial for a hill-top town.  There are public drinking troughs at low points just inside the city walls.  There are circular stone covers that surely give access to stormwater drains.  I first saw these in Florence, and there are lots of them in Volterra.  Sometimes you can see outflows from the edge of the street leading to barrel-vaulted brick drains. 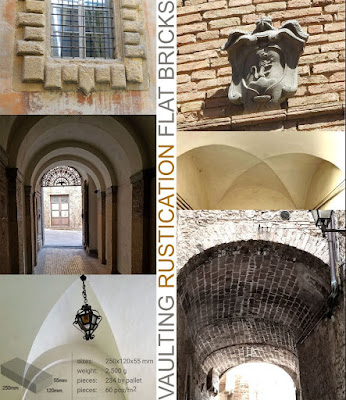 "Roman bricks" to me are long, wide and shallow: half way between a brick and a tile perhaps.  Think Frank Lloyd Wright.  The standard size in Tuscany seems to be 250x120x55.  The interesting thing about this format is its flexibility.  You can use it for flooring and vaulting as well as in coursed walling.  Various kinds of vaulting are commonly used in ceilings, often plastered, but sometimes with the flat brick exposed.  How are these constructed?  You would assume that timber formwork is used, but how do you go about constructing an internal vaulted ceiling within an existing space?  It seemed to me that some shops and cafes had managed to do this, but how?  As a side note, there are coats of arms all over the city.  I wonder how many families maintain this tradition, or can interpret the symbolism. 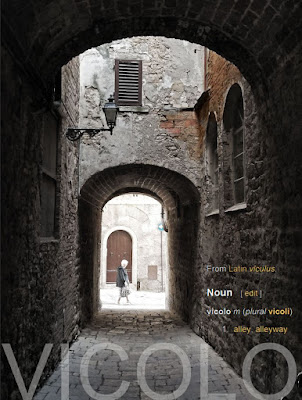 I suppose you could set up a blood-circulation metaphor, where "Via" means Artery, flowing from gate to gate across the crown of the ridge, and lined with the Palazzi of the patrician class.  "Vicolo" then would translate to capillary, dispersing oxygen to the lower classes as they trickle down the slopes towards the perimeter wall.  But why are these dingy, crumbling alleyways so attractive, so tinged with romantic beauty? 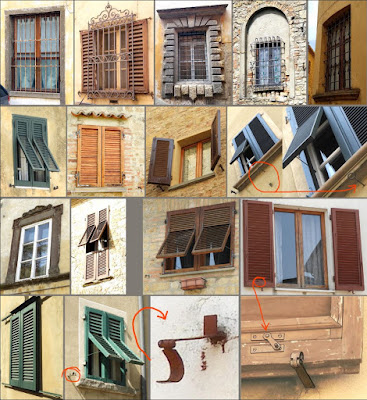 Getting back to the windows...  I will get around to more Family Editor work in due course.  Meanwhile there are dozens of images to sift through and make sense of.  I'm fascinated by the ironmongery/window hardware.  What are all these items called.  There's the shutter stay (?) for holding open the flap, usually a rod bent into shape like a tent peg.  It slots into a series of holes in the shutter flap to hold it open at different angles.

The bottom hinges are commonly L shaped to hold the bottom rail at right angles to the hinge stile, in case the tenon joints should loosen up and the whole frame droop into a parallelogram.  Then there are the wall brackets that hold the shutters in a fully open position.  Flat steel bar built into the wall, with a spring clip hinged from the outer end.  What about the little catch that holds the flap in place when closed: two flat plates and a little rotating arm?  Very common also is what I guess must be a flag-pole holder.  So many things you can do by leaning out of one of these windows: hang out the washing, water the plants, adjust the flow of light and air, fly the flag. 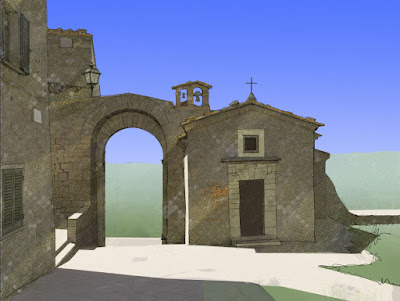 My final drawing was done on the PC using a Wacom tablet.  You can tell by the sensitivity of the line and the level of detail.  This is San Felice, a chapel and a minor gate.  This image captures the feeling of a limitless horizon around the town: rolling arable farmland floating out in every direction.  Comparing the three formats/operating systems/pen technologies?  I still find the Apple pencil disappointing, but the iPad is a good compromise between phone and PC peripheral in terms of size and portability / ease of use.  I guess I will continue to use all three. 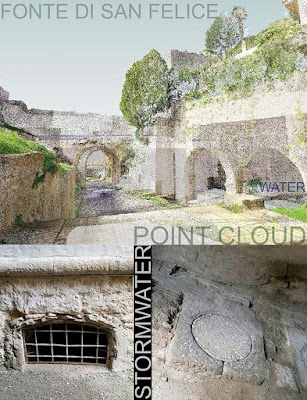 Down the hill to the right is the "Fonte di San Felice" part of the city water system that includes underground cisterns and at least one natural spring.  Lots of questions about how that network works (or worked).

We have so much point cloud data, mapping out the major arteries in three dimensions.  I've linked this into a massing model of the city, constructed in Revit.  This image is a camera view from that Revit file, with the point cloud isolated.  It shows two drinking troughs and an archway going under the road that circles the city just beyond the perimeter wall. Below are snaps of a stormwater outfall and one of the circular stone covers. 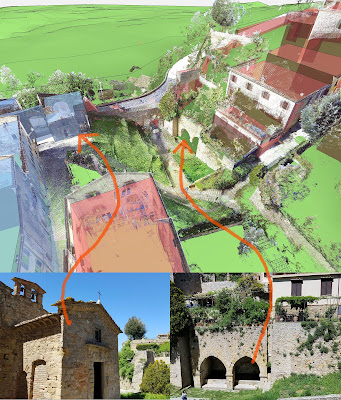 The massing model is colour coded, dividing the city into zones as an aid to understanding its structure.  I'm really enjoying the combination of this very abstract, representation of the city and the incredible detail of the reality capture data.  It's a potent combination for analytical studies.  To date my main focus has been to consolidate memories of a rich two-week experience and to build up my knowledge of the city, it's structure and urban texture.  But of course I'm also beginning to search for meaning, to make comparisons and to ask probing questions. 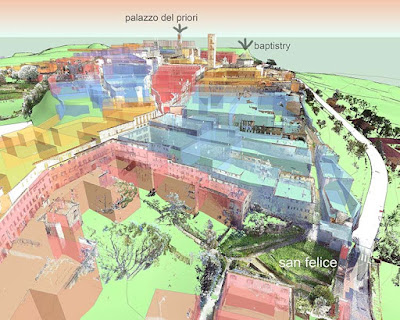 At some point I will look to connect this work with my studies of the Bank of England.  Tuscany has very strong historic connections to the economy of Britain.  Wool was the mainstay of British wealth for centuries, and the bankers and merchants of Florence played a key role in this trade.  There is a famous episode in Medieval history called the Revolt of the Ciompi where the wool workers rose up against the patricians and established their own government ... briefly.  One of the striking features of Volterra is the role that artists and craftsmen continue to play in the life of the city.  There is a continuity of urban life which is almost tangible: the alabaster workshops, metalworking and terracotta sculpture. 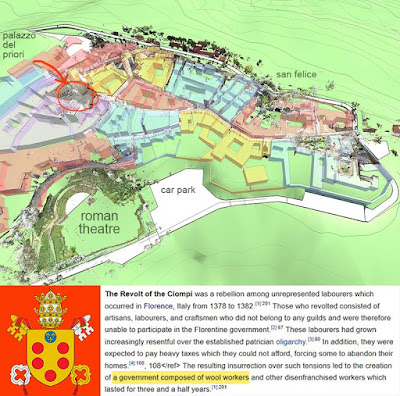 Reflecting on the last few images, I am also struck by a physical resemblance to the Bank of England: the jumble of irregular building masses crammed within an encircling screen wall, a palimpsest bearing the marks of historical evolution.
The BIM pencil strikes again.
Posted by Andy Milburn at 9:59 AM 1 comment:

Email ThisBlogThis!Share to TwitterShare to FacebookShare to Pinterest
Labels: Drawing, Reality Capture
Newer Posts Older Posts Home
Subscribe to: Posts (Atom)
ABOUT THIS BLOG
All my life I've been fascinated by the way we build: the processes by which we design & construct our world.
The tools are many:
eye/ hand/ brain ... pencil & paper;
bricklayer's trowel ... laptop & Revit®.