What do you mean: "just" drawing?

I've been away.  Some emotional family issues, saying hello to my grandson & goodbye to my mum.  No time for blogging, but some for reading and thinking.

It has often been said that CAD was "just" drawing (lines. arcs & circles) whereas BIM takes us beyond this to the brave new world of "digital prototyping".  Well, fair enough if that's the point you want to make, but hold on a second.  What do you mean by "just" drawing ?

As a species we have been drawing for at least 30 thousand years.  Visual thinking is deeply embedded in our history and has been explored with both creativity and determination by many great minds.    Leonardo used it as a tool to explore human anatomy.  Brunelleschi and Alberti unlocked the geometric secrets of perspective almost 500 years ago. 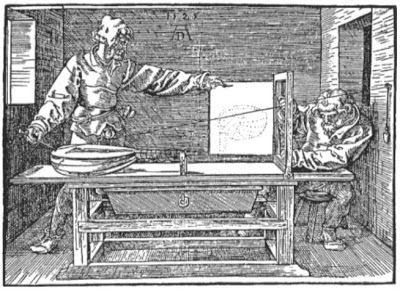 Orthographic projection  was formalised towards the end of the 18th Century (descriptive geometry, Gaspard Monge)  Another Frenchman is credited with inventing the blueprint in the second half of the 19th Century.  Aren't we being a little arrogant and melodramatic to imagine that BIM somehow takes us "beyond drawing" in a way that these earlier step-changes did not ?

Another thing.  For me there is no hard line between drawing and modelling.  There is a nice photo of Matisse sitting in his wheelchair surrounded by large paper offcuts.  His cut-out phase.  Was he drawing or modelling ?  Does it matter ?  In Science, models are abstractions that simplify reality so that it can be more easily studied.  But isn't that what they are in art also ?  Isn't a pencil sketch also a simplified model of reality ?

Victor Horta is known for the "irrational" curves of his art-nouveau metalwork, but there is a fascinating drawing of his that "models" the angles of sound reflection in a concert hall.

Gerrit Reitveld is said to have slept with scissors, card & glue on his bedside table in case he woke up with an idea for a new piece of furniture.  Would that be modelling ... or sketching in carboard ?

We often boast about the speeding up of the design & build process that BIM & IPD can achieve.  I recently came across a sketch that Joseph Paxton made on blotting paper, doodling during a meeting.  He was thinking out a proposal for what later became the Crystal Palace.  It took just a month to take this sketch through construction drawings, tender & client approval.  In less than a year the building was complete.  Three years after that it had been dismantled, modified and re-erected on another site.

Personally I think that the transition to BIM is more significant than the move from hand drafting to CAD: a bigger step-change.  But it's important to keep our feet on the ground.  Perhaps if we see our work within the context of a long and fertile history of visual thinking it will help us to see beyond the BIM blinkers we sometimes wear.

Can we use BIM tools to research the world around us, as Leonardo did ?  Can we find the BIM equivalents of thumbnail sketches ?  Can we imagine a tool that bridges the gaps between Revit, Formit & Hand sketching ?  There is immense power in the hand-eye-brain feedback loop that comes into play during rapid freehand sketching & this becomes even more powerful when used in a social context.  3 or 4 people trading sketches around a table.  Can you imagine a BIM tool that is as responsive and interactive as that ? 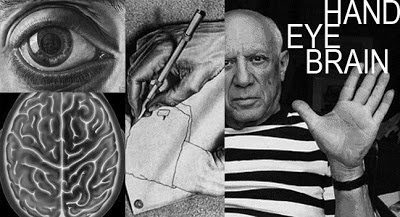 These days, Revit is my drawing tool of choice & over the past few years I've made several attempts to use it as a "thinking tool" : another kind of sketching, a way of exploring ideas, seeing things in a fresh light.  Make a model of that idea.  What would it look like ?  Here are some:

Le corbusier's "Four Compositions" sketched out in his own wonderfully terse drawing style ... and my attempt to capture the same spirit in Revit. 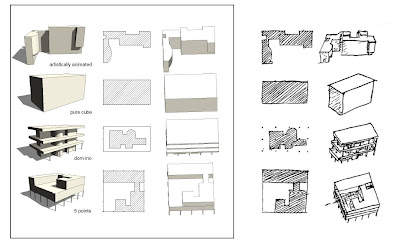 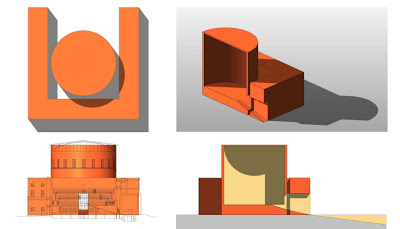 There's this thing called evo-devo which deals with the development of embryos from an evolutionary standpoint.  Lot's of fascinating stuff about Hox genes that switch things on and off at different stages in the development process.  It's a bit like saying we're all baked from the same recipe, just that the quantities and timings change.  Seemed to me this was like a parametric thing, so I made a highly abstracted generic vertebrate.  One family, four types.  Have to try doing this again one day using some of the conceptual massing tricks I've learnt since then. 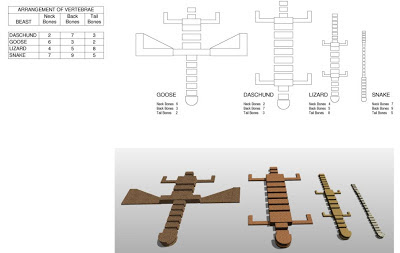