WAITING FOR THE MAN

And what better place to wait than Waiting Room "B"

Just over a week ago I attended a couple of events in London to mark the conclusion of the second phase of Project Soane.  It was a great pleasure to meet Melissa & Graham  of RAMSA who were instrumental in setting up Project Soane in the first place.  We had lots of fun sharing ideas and enthusiasms.  I can never thank them enough for dreaming up the idea of recreating the Old Lady of Threadneedle Street in the cloud. 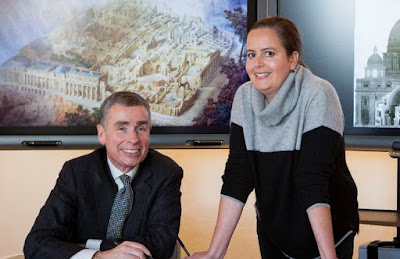 And of course Sean Young is "The Man" who kept the wheels turning and persuaded me to take a detour via London on the way back from Porto.  In Porto I ran into Kyle Bernhardt of C4R who came up with the idea of putting Project Soane onto that cloud based collaboration platform.  We did just that, together in one of the speaker rooms, and this weekend I had my first chance to give it a serious whirl.  Very happy to report that it's performing really well so far. 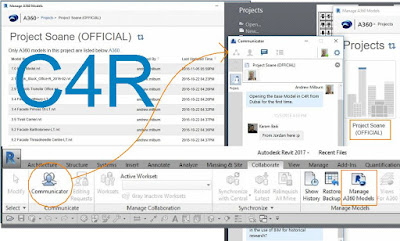 I have been studying the survey drawings by the office of F.W.Troup that were made in the 1920s prior to demolition.  Troup did some schemes for the redevelopment of the bank before the governors decided to appoint Herbert Baker for the job.  The drawings are in fold-out sheets at the back of a second hand book that I picked up earlier this year.  I've photographed these and started to paste them into Revit views where I can scale them up, make some construction lines and figure out the key dimensions. 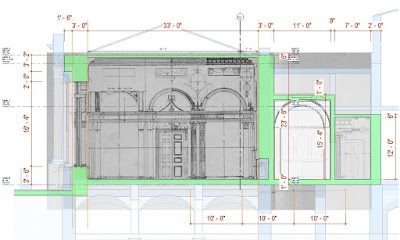 I'm focusing on the Court Suite area, which is the least well developed at present of all the areas where Soane did some serious work.  It's not easy to figure out what he was up to here, but I'm starting to see the light.  As usual it's about a series of spaces with contrasting proportions and surprisingly inventive lighting.  He was creating new offices for the Governor & Deputy Governor, and reorganising the circulation in this whole zone.  The two major spaces (Court Room & Committee Room) remained as Taylor had designed them, as did the Entrance Lobby, but everything else was completely reworked. 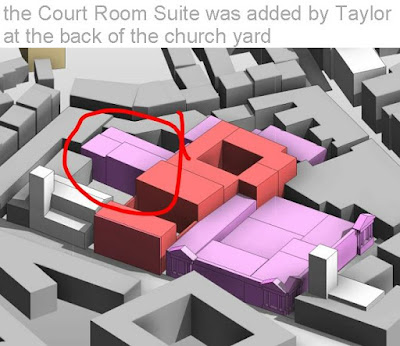 The two small waiting rooms (A & B) are quite intriguing, so I decided to make a massing model (Generic Model Family). He created a square in the middle and covered it with a groin vault.  In the centre of this is a small lantern.  I was wondering how he had managed to resolve the junction between the cross of the fault and the circle of the lantern when I noticed the corner of the pendentives.  There is a device here that Soane used in some of his canopy ceilings.  (the breakfast room in his own house for example)  I'm not sure where this first came from, but it reminds me of pleats in dressmaking which help to make cloth fall more naturally. 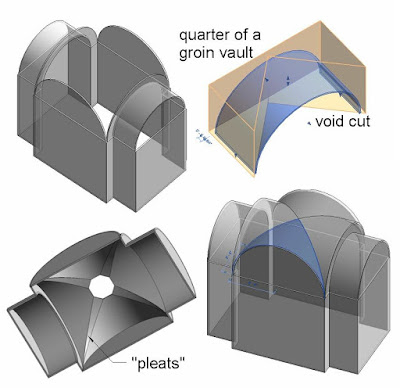 I don't have a photo of the lantern, but I'm guessing that it's octagonal, and that the "pleats" help to blend the ceiling into the circular eye that it sits on.  I think this will repay further study later on, but for now I wanted to move on to adjust the setting out of the walls in this whole area.  Troup's survey gives me a set of dimensional checks and I need to make some corrections to my first-pass layout.  The current model is based on several simplifications and rationalisations.  There's going to be a certain amount of conflict and compromise.  We will never get every dimension to match up exactly with the source material, but we must aim to represent the size and proportions of all the parts without undue distortion. 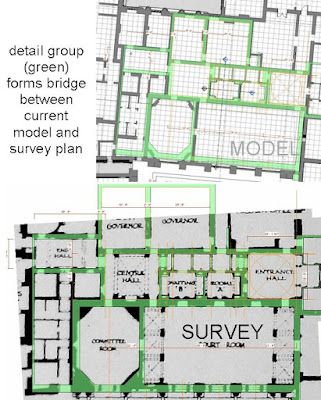 I set up a detail group (2d drafting) that is placed twice.  One is overlaid over a plan view of the model, the other over part of Troup's survey plan.  Placing the whole survey plan onto the model is quite confusing.  If you get one corner lining up nicely, the opposite corner gets into a tangle.  So this solution allowed me to jump backwards and forwards between two fairly clear pictures and gradually reach an acceptable compromise.

The translucent green filled region is my proposal for adjusting the walls, and once I had it in reasonable shape, I copy-pasted it into the C4R version of the model. 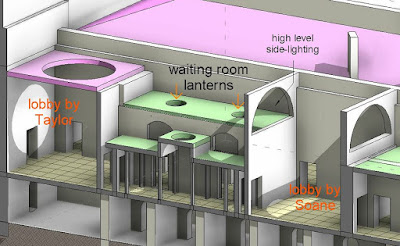 Then I set to work, and with frequent checks against the photos and survey sections that I had marked up, was able to make a reasonable stab at how the roofscape was developed.  Bear in mind that up until yesterday, this whole area was just covered with a flat slab.  I just had no idea which parts were higher and lower, how the light got in, how the space was drained. 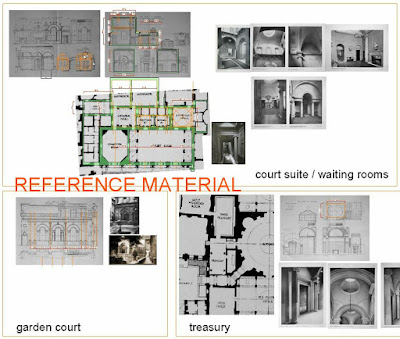 What I have now, (and you can see the results on A360 if you are registered for Project Soane), is a useful first stab at Soane's remodelling of the Court Suite, and especially the waiting rooms and lobbies.  From here we can proceed to add detail and fine tune the setting out. 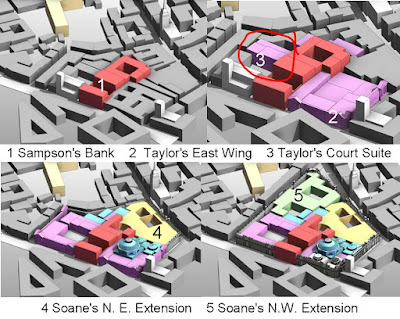 Hopefully this is the beginning of a new phase of Project Soane.  We have a much improved collaboration platform, and the whole of the bank is now roughed out.  The two banking halls that were modelled by Russel and Alberto during phase one have been taken to a much higher level of detail.  One task, moving forward would be to take other areas that I have roughed out and bring them up to a comparable standard.  Another area that I have started to look at is the development of the design over time.  I have not yet uploaded that massing model to A360, but I do intend to.  There is much more that could be done to understand the building as a sequence of events: demolitions and reconstructions, adaptations, rebirths. 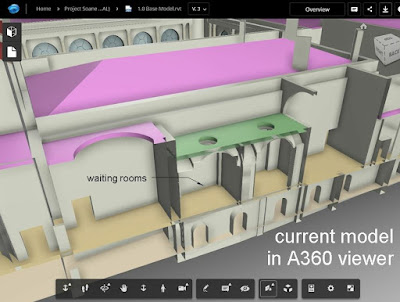 Let's finish with a shot of three gentlemen, meeting up one afternoon in London, en route from Portugal to various other destinations.  Sean Young from HP has become a good friend, and although the sponsorship phase of Project Soane has run its course, I'm sure will continue to take an interest in whatever the community he helped to found chooses to do moving forward.  Randall Stevens is the man from Archvision and Avail, two very interesting contributions to the ever-expanding world of BIM software, one well established, the other quite new.  He has also become a good friend and it was great to hang out again. 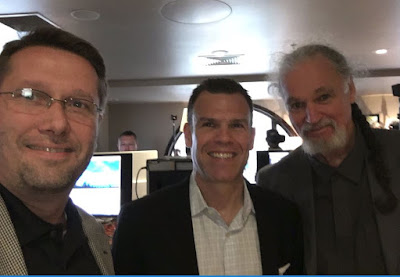 Email ThisBlogThis!Share to TwitterShare to FacebookShare to Pinterest
Labels: Classical Architecture, Way We Build
Newer Posts Older Posts Home
Subscribe to: Posts (Atom)
ABOUT THIS BLOG
All my life I've been fascinated by the way we build: the processes by which we design & construct our world.
The tools are many:
eye/ hand/ brain ... pencil & paper;
bricklayer's trowel ... laptop & Revit®.