Too long between posts, and especially behind on reporting my Bank of England
work.  We've been plugging away steadily, but even with a three day weekend, time seems to run out before I can document the progress.

Waiting Room Court was due for an upgrade, including the loggia along the northern side.  Soane had a strong liking for processions of tall narrow arches.  We have come across this in his church at Walworth as well as the central corridor of the Board of Trade.  I think the loggia is one of his best variations on this theme.  The drama is heightened by the way it proceeds from the relative darkness of the Doric Portico, opens up into the courtyard, then closes up again. 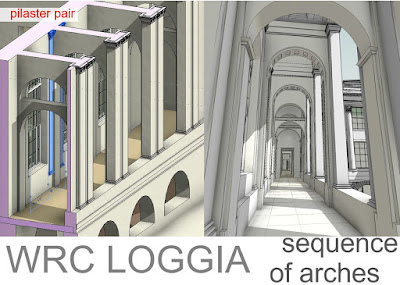 In preparing this post I came to another of those "realisation moments" that make this work so addictive to me.  The paired, shallow, flat columns of the distinctive north façade of Waiting Room Court are not just one of Soane's mannerisms.  They are their because of his wish to combine an "enfilade" of arches down the length of the corridor while keeping the space open to the elements on the courtyard side.  On the internal side, the cross-walls that host the arches are framed by a pair of half-pilasters.  On the open side these half-pilasters wrap around to be expressed as those distinctive flat columns that make such an impression in Yerbury's record photos from c1930. 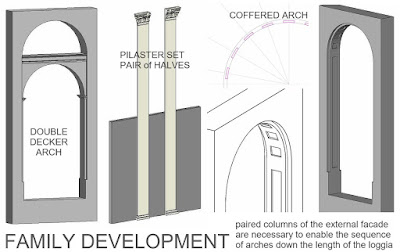 Another subtlety I quite enjoyed was the splitting of walls in section view to create the hint of an entablature resting on the pilasters.  Along with the two types of arches, come two arrangements of ceiling coffers, both quite elaborate and treated here as loadable Generic Model families.  The enscape3d image below was captured before creating the coffers families and the three images on the left record a developmental sequence, starting with an in-place extrusions, copy-pasted into a family template, then cut by voids.  Is this a Soane original design, or is it developed from a classical precedent?  Obviously stepped coffers, and oval coffers were not invented by Soane, but what about this combination.  I really don't know.  Perhaps someone will stumble across an answer. 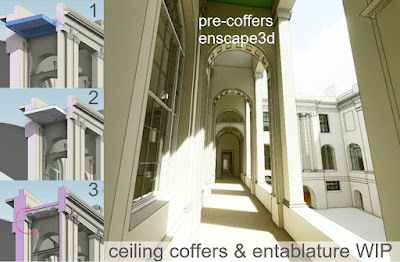 It's important to remember that Waiting Room Court (WRC) is built at the junction of old and new.  Princes Street used to run diagonally across this space, until Soane straightened it on behalf of the Bank as it flexed its muscles over its former landlords the Grocers' Company, who owned the land where the loggia was built.  So the loggia represents the new regime: modern banking with shareholders and a board of directors, while the other 3 sides of the courtyard recall the older world of medieval guilds and hereditary occupations.  Whether consciously or not, Soane has expressed this transition in his architectural treatment.  And it's interesting to note that he maintains a balance between contrast and harmony.  The courtyard holds together despite the rather different elevational treatment of the loggia.  All four sides stand on the same rusticated base.  Britain managed its transition into modernity without the cataclysm of the French Revolution partly due to the moderating influence of the Bank of England. 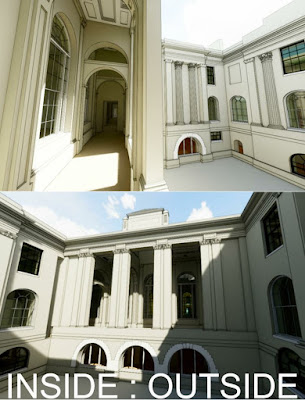 It's almost embarrassing how easy it is to capture compelling images with Enscape3d.  Here you can see the two types of coffer and the two different arches.  Also on view is the higher ceiling in the central bay, which is still very crudely modelled.  I'm tempted to add some top lighting here, although the survey drawings suggest blind recesses rather than windows.  This is not definitive of course.  The survey also shows the narrow end bays as open, which is a change that was made later on by another architect.  Certainly it would be unusual for Soane to create this additional height without lighting it.  This was done before gas lighting remember. 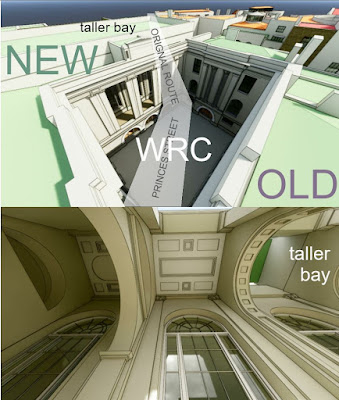 The WRC itself was long overdue for a facelift.  Window families were just simple openings in some cases.  The main cornice had been created as a wall sweep and kept coming apart at the corners.  Replaced with an in-place sweep. The basement story needed to be treated as a rusticated base so we made a start on that by fleshing out the large half-round windows. 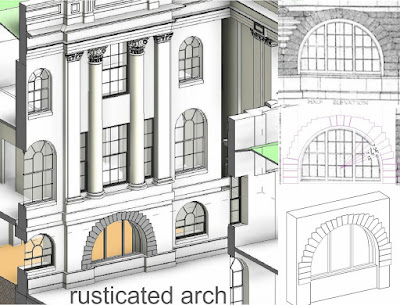 It's clear that several of the windows are "blind" because they back on to the junction between rooms or, in one case overlap between the top corner of a vault and the ceiling void above.  To achieve the blind window effect, replace the cut opening with a void extrusion. 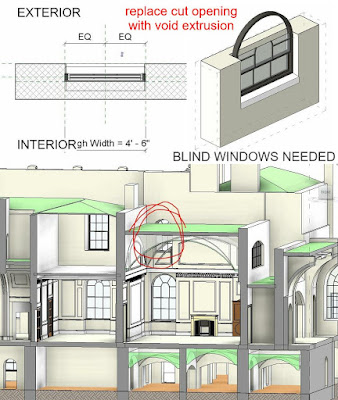 As the rustication proceeded it seemed appropriate to update the render appearance for the walls to a more stone-like material.  This led to some quite dramatic images, but ultimately the stone finish is not correct for the internal spaces, so I have begun to set up new wall types 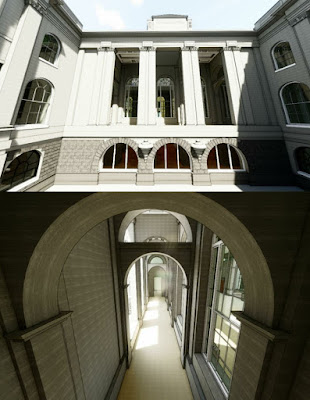 All the same it does feel good to have additional richness in terms of material finishes.  We will have to look for other ways to achieve this moving forwards, maybe it will come in features like the fireplaces, and perhaps we can start to add furniture, carpets, etc. to bring spaces to life.

An interesting question that arises in my brain from time to time.  Why spend time creating seductive, dramatic images?  How does that relate to "historically accurate modelling" on the scale of aims and objectives?  My answer usually is: this is all about understanding, finding meaning in our built past.  Understanding doesn't always arise through conscious reasoning.  In fact the evidence is that our opinions are formed at a subconscious level and subjected to conscious reflection after the fact. 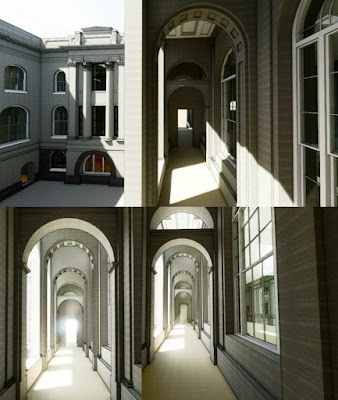 So I would say that it's a cyclical process, like anything in the creative realm you pour energy into an activity then stand back and review.  Emotions and reason intermingle to drive the whole thing forward.  Insights often come apparently from nowhere: those Eureka moments.  So while you are "waiting" for the next blinding insight, why not feed the brain with stimulating visual fodder?
Posted by Andy Milburn at 8:46 AM 1 comment:


My trip to Volterra is looming and I wanted to do something to get me in the mood, so I started developing an approach to parametric modular windows of a particular Tuscan style.  Here is the first fruits of that venture. 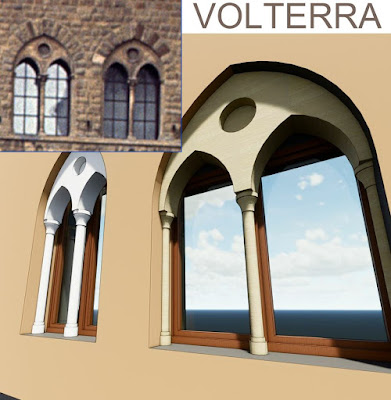 The starting point was a parametric pointed arch. From there I went on to develop 3 more families with nested families for the stone "Insert" and the glazed timber "Window Unit".  The idea is to set up a modular system where you can swap out the Insert and the Window Unit for different versions without starting again from scratch.  By keeping the names constant, all the parameter linking remains intact. 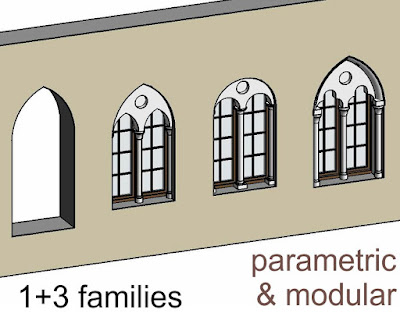 I am using the nested planting family hack to easily scale the columns.  The intention being to allow for more complex capitals and base mouldings, while retaining ease of scaling.
All was fine until I checked out the windows in the plan view.  First of all the top part of the insert tends to show up, blocking everything else.  This is easily solved but I was still left with columns that don't react to the cut plane. 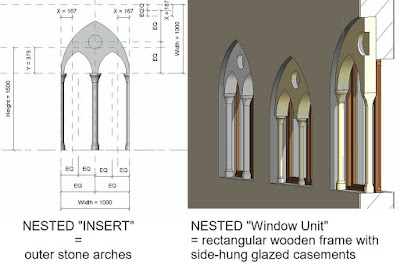 The complexities of how window families interact with the cut plane are quite interesting, and I recounted my explorations of this, long ago.

As it happens, things get even more complicated when there are nested components of a different category.  Usually I keep all my nested families in the same category as the host family, so that subcategory visibility is predictable and consistent.  But the planting hack throws a spanner in those works. 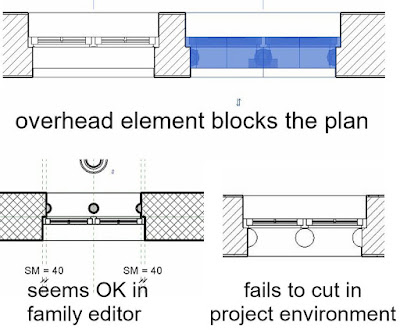 I don't have time for a detailed analysis just now, but suffice to say I did a whole series of permutations to get the columns to cut nicely without success.  Strategies that seem fine in family editor don't pan out in the project environment.  Conversely families that look fine when placed directly in the project fail to cut when nested into a host window. 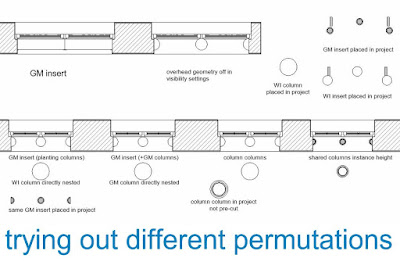 In the end I have opted for a shared family for the columns.  This is in the column category, with the "pre-cut" option unchecked.  Probaby a shared Generic Model would also work.  So there is an "inner" planting family, inside and "outer" planting family, inside a shared column family.  The height of the column family is an instance parameter so that it can be controlled from within the host.  You can't link type parameters for shared families because that would defeat the whole idea ... that the family acts as if it was placed directly in the project. 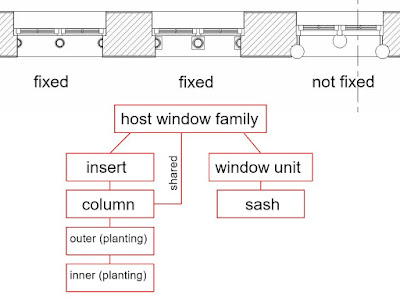 Maybe Paul Aubin has a better solution to this, or even a better approach to the whole business.  I'm sure we will talk that through when we meet up in Volterra in a couple of weeks time.  We won't have much time for making families during the workshop.  The focus will be on collecting data with various bits of reality capture kit.

At the moment the families are based on a few rather grainy internet images.  It's a very interesting approach to windows I think.  Had never really thought it through before.  It's clear that there is a rectangular window with side-hung casements (must open inwards) and this is tucked behind a decorative stone "double arch within a larger arch"  I'm very keen to scan a few examples now to get the sizes and relationships right. Probably there are more surprises in store.  Internal shutters ?  Splayed internal reveals ?  Sill treatment ? 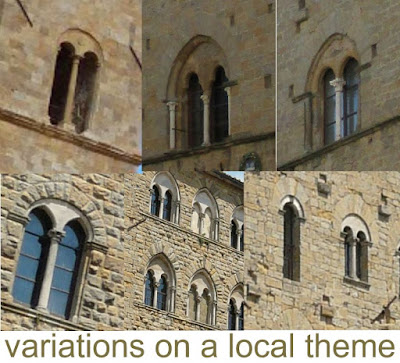 Then we could develop a range of parametric components which could be used to assemble urban settings like the main square in Volterra.  That's my basic premise anyway.  By the way, here is my solution to the pointed arch parametrics.  Didn't check out any other ideas, just decided to develop my own approach 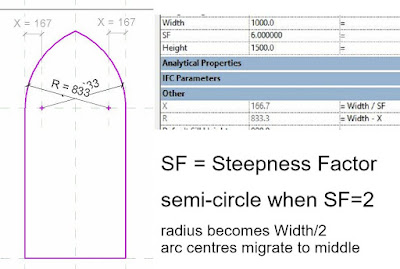 Email ThisBlogThis!Share to TwitterShare to FacebookShare to Pinterest
Labels: Way We Build
Newer Posts Older Posts Home
Subscribe to: Posts (Atom)
ABOUT THIS BLOG
All my life I've been fascinated by the way we build: the processes by which we design & construct our world.
The tools are many:
eye/ hand/ brain ... pencil & paper;
bricklayer's trowel ... laptop & Revit®.