I SUBMIT (OR NOT)

At the end of the first stage of Project Soane I had grand plans to create a "Design Report" booklet as my submission for stage 2 (the Rendering Competition)  This was going to be somewhat along the lines of the Desert Pumpkin thing that I did, but since I don't really do high end rendering I planned to collaborate with some of the rendering guys in our office.  My contribution would be the narrative, the images recording my journey of discovery, and the "construction drawings" appendix that would be part of the booklet.

The whole project was pretty much still born, because I lost a lot of momentum and got interested in other things for a while.  Recently I picked up on modelling the Bank again, and have made some good progress, but I'm not really that close to having a set of construction drawings and I haven't succeeded in inspiring any collaborators on the rendering side.  Realistically I am probably a year away from being ready to hand over my model to a rendering team, at current rates of progress.  All the same when I got the emails saying "5 days to go" etc I felt that I wanted to do SOMETHING to mark the end of the second stage.  I still feel a part of the project and I have a lot of visual material, (including some quick Revit renders) that I wanted to assemble in some kind of way.

So I decided to do a set of collages that summarise my entire body of work to date.  Step One was to do renders of my most recent work (Lothbury Court & Residence Court) and Step Two, which was hurriedly executed in parallel was to assemble the collages.  I have created 4 of these, as follows:  an overview of the whole Bank, which also hints at the idea of a construction set, a sheet on the five Banking Halls, a sheet on the N.W. extension (mostly done earlier this year) and one covering the N.E. extension (my recent stuff) 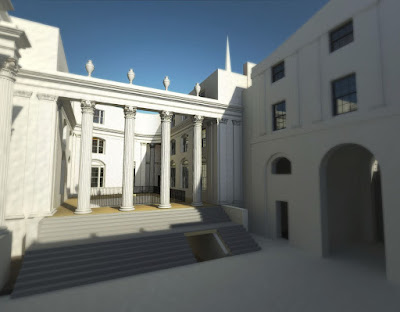 The renders are all medium quality, medium res images that take maybe half an hour to render in Revit.  Right now the model is having difficulty rendering with Mental Ray on my basic laptop, so I have been using Autodesk Raytrace.  The only problem I have with this is that it makes my standard trick of overlaying two images much less effective, because there are registration problems.  When you save a shaded image and overlay it on a Mental Ray image with the same pixel dimensions it fits nicely and you can achieve some great enhancement effects very easily. 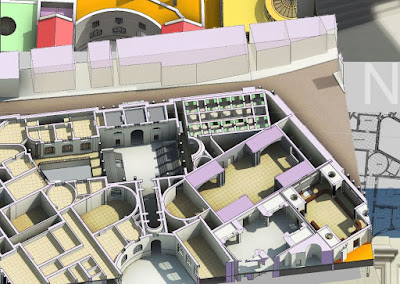 Once you switch to the new rendering engine, it seems that the process uses a slightly different lens, so that objects may be aligned in the centre of the image, but misaligned around the edges.  With a bit of patience you can achieve a fairly good fit by shifting the image a few pixels to one side and scaling it by perhaps half a percent.  I would love to see a technical explanation of why this happens because Mental Ray is being phased out, and this favourite trick of mine will lose a good deal of its appeal because of the extra time and effort, plus the decline in accuracy or crispness of the final image. 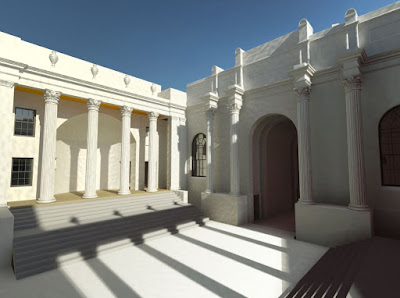 The images interspersed in the text of this post represent "Step One" and if you look closely you will see some of the misalignment effect.  I decided to mask this at times by using soft focus at the edges or fading out to artistic effects like "watercolour" or "chalk & charcoal".  This is all done using an image editing programme like Photoshop, or Autodesk Sketchbook, or The Gimp.  These artistic effects are not just there to hide technical problems of course, I'm looking to conjure up an atmosphere, the beginnings of telling a story.  I had hoped to also add entourage to some of the images, maybe even some planting, although there wasn't much vegetation in Soane's Bank, a couple of trees in the Garden Court perhaps. 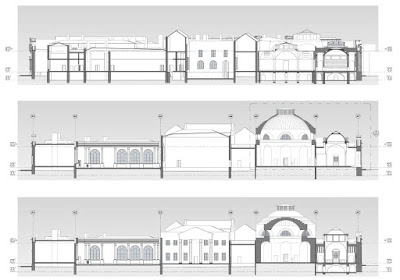 The fading of effects is achieved using masks and gradient fills.  This is an easy way to vary the transparency of a layer.  So you can duplicate a layer, apply a blur filter, then use a transparency mask to make that layer fade from totally transparent in the middle to totally opaque at the edges.  The result is very similar to a camera shot with poor depth of field.  The closer objects in a courtyard shot tend to be at the edges (blurred) and the distant objects in the middle (sharp).  Instead of a gradient you can use an irregular brush with low opacity and scribble over the mask in a random manner.  This tricks your brain into seeing a rather loose watercolour brush technique.  You are reminded of hand drawn artistic impressions of buildings. 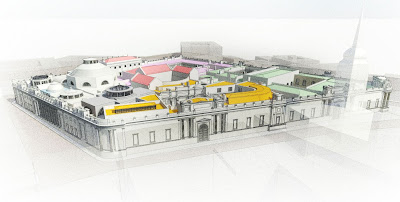 I guess this is analogous to the novelist or playwright who supplies part of the story and induces her audience to fill in the gaps from their own imagination.  It's an important technique for architects too.  You want to stimulate ideas in your client's subconscious so that you learn more about what they really want, often stuff they are not fully aware of themselves.  Perhaps this captures the essence of the rendering stage of Project Soane.  Take what is essentially a rather dry historical study and breathe life into it, capture the imagination, tell a story.  But, just to be clear, my collages are not a serious entry for this stage of the competition.  I did submit them, but the purpose was just to say "Hey guys, I'm still here, working away in the background and I'm very interested in what comes out of this stage of the project."
Posted by Andy Milburn at 1:35 PM 1 comment: