When Residence Court was built, it nestled into the NW corner of the site where the dog-leg of Princes Street joined Lothbury.  Later on this section of Princes was closed off and incorporated into the NW extension.  Two sides of the court were dedicated to 4 storey apartments for two senior officers of the Bank, and a  third to offices for the Chief Cashier's department.  On the fourth side a screen of columns atop broad flights of steps denoted the boundary with Lothbury Court and the bullion passage. In the N.E. Extension there are several elliptical spaces.  Now the ellipse is not available in the "drawing toolset" for walls.  This is quite logical. You couldn't apply normal "location line" behaviours to an elliptical wall.  If the Interior Face was an ellipse then the Exterior Face would not be.  You can't have two ellipses that are parallel to each other all the way round.  Because if you scale an ellipse, the long axis will increase by more than the short axis. 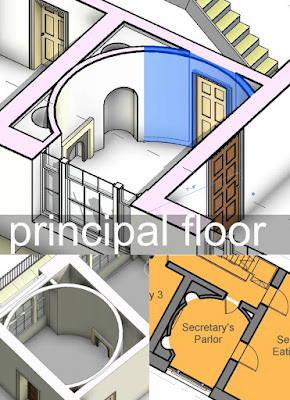 One solution is to use 4 arcs that meet tangentially.  I was aware of this workaround, I've even used it, but I had never looked carefully into the subtleties of the setting out.  This turns out to be very interesting.  We are dealing with the Secretary's Parlour, and tracing over the plan at cellar level I came to realise that you need 4 centre points (which define a diamond) Extending the 4 sides of this rhombus, establishes the meeting points for the arcs, and the length of one side gives you the difference between the major radius and minor radius. 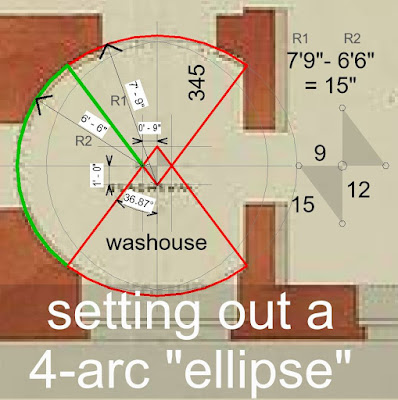 I quickly realised that in this case we were dealing with a 345 triangle.  This allows the vertical, horizontal and diagonal measurements to all be whole numbers.  Clearly this would make life easier for both draughtsman and builder.  I probably spent a couple of hours figuring it all out, but the insights gained were definitely worth the effort. 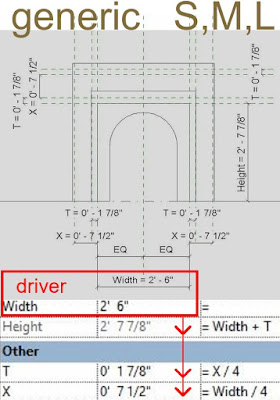 I have a generic fireplace family that is used wherever I need a fireplace, but lack specific information about its appearance. It is set up with simple formulas that scale the geometry based on a width dimension. In the cellars below the principal floor are the kitchens and washrooms for the residences above where the secretary and chief accountant lived. 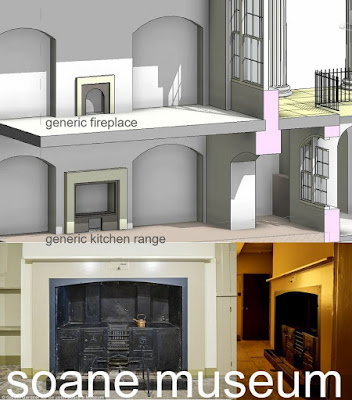 So I have created a generic kitchen range along similar lines.  This was done purely from memory, but later I remembered having images of the range at the Soane Museum (his own house).  Probably I will make a version of the range family that matches this more closely.  Maybe I will make a few different ones based on various reference images.  I'm old enough to remember working versions of these ranges.  Several of my elderly relatives were still cooking on coal fired kitchen ranges when I was a boy. 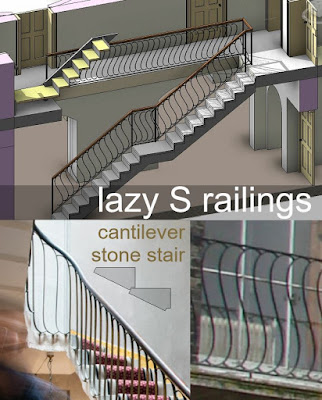 The secretary's house features a long straight stair with a half landing.  I'm pretty sure these would be stone steps cantilevered out from the wall, each one resting partly on the one below.  That's how the stairs in his own house are, and the ones in his churches.  As for the balustrade, he had two or three designs that he favoured.  Perhaps the most common is a shallow "S" curve.  I decided to have a quick go at this.  It's not quite right when you look closely, but it's certainly heading in the right direction.  At present I am still showing timber construction for the upper flight.  Maybe so, maybe not. 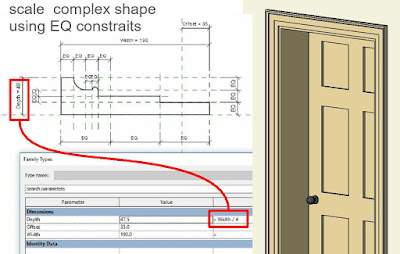 I'm a firm believer in flexible and lightweight generic families.  Seems to me they are crucial to fluid and responsive early design processes. I've got a fairly good modular door system going, but what about the architraves (trim)? Soane used fairly complex mouldings. I wanted to be able to scale these based on a "Trim Width" parameter.  With a bit of thought you can set up a grid of reference planes governed by 3 or 4 sets of equality constraints and make the depth proportional to the width. 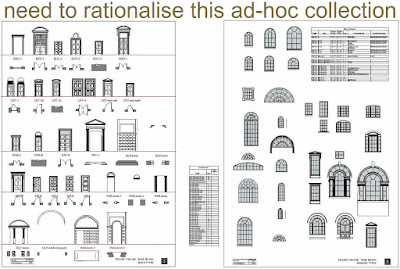 The Doors and windows in this model were mostly created "on-the-fly" while fighting my way through the jigsaw puzzles of Project Soane. What was the original design intent: (functional relationships, lighting effects, structural constraints, response to previous work).  There have been periodic attempts to impose some order and consistency, but to be hones, they really need a thorough overhaul.  For one thing, my approach to making door and window families has evolved quite a lot since I started Project Soane. 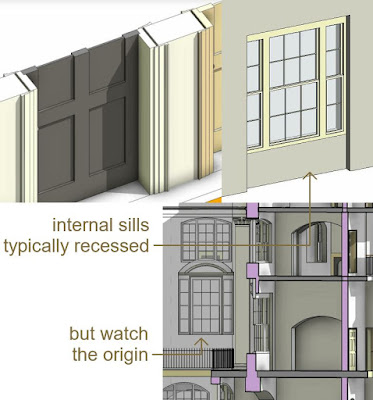 Sliding sash windows in thick masonry walls usually have a recessed internal sill.  In Revit this requires using voids rather than cut openings.  The windows around the principal floor of residence court have two narrow sidelights and a segmental pediment. Originally I made this with cut openings (as you do). On converting them to an internal recess, the issue of vertical origin arose.  Where previously the lowest point was the base of the window frame, it now became the base of the internal void.  This explains why one of the windows has "jumped up". 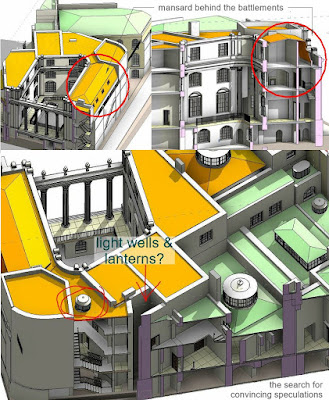 The residence court roofscape is a bit of a puzzle.  I've played around with various arrangements.  I know that the top floor has a mansard treatment along Lothbury, behind the "battlements".  But it's not clear how this turns the corner, or just how it buts up to the porter's lodge.  At one stage there was a light well around the corner, up against Princes Street as it used to be.  This may have been enclosed later on, but currently I prefer to keep it in the model.
I think it gives light and ventilation to small bathrooms & toilets fitted into leftover space.  I'm also speculating that the triangular stair rising up in this corner is top lit.  The circular lantern is there to remind me to give it more thought.