I have to dedicate this one to my very good friend Paul Aubin who shares my interest in classical architecture, which seems so unified and internally consistent at first glance, yet is capable of infinite variation. 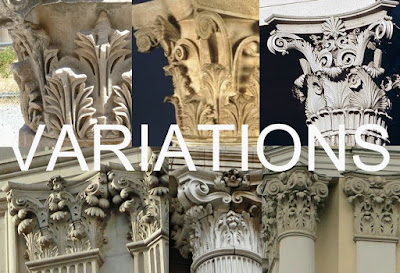 A couple of years ago we traded ideas on how to model a Corinthian Capital in Revit. (scarily it turns out to have been 2012 when I look back through my old posts) Typically, my own work showed great promise, but petered out before coming to a definitive conclusion.  Just as typically, Paul stuck to his timetable and published a rather remarkable book (Renaissance Revit) for which he was kind enough to ask me to write the foreword.

This in turn played some part in motivating Project Soane, which has become my obsession for the past 18 months or so, longer than any previous "BIM pencil" project that I have undertaken. Along the way I created a rather odd version of the Corinthian Capital which has been substituted for Paul's version in most parts of the current model.  There are three reasons for this, which I have stated before. 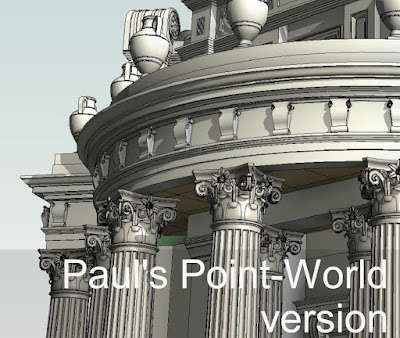 Firstly my version is much more lightweight, perhaps a tenth of the filesize. Secondly it is made using the traditional family editor (Vanilla) whereas Paul's makes use of the Conceptual Massing Environment (Point World).  In other words it is an adaptive component, therefore not level-aware or work-plane-based and subject to some unpredicatable inversions when mirrored (for example).  Finally the version of Corinthian which it emulates is different from the rather stiff and compact one that Soane used in this instance. 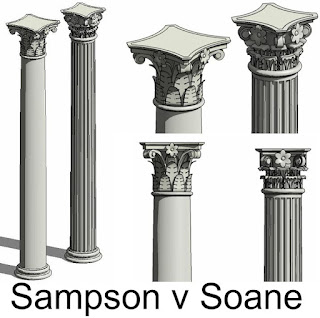 Paul's capital is much closer to the one used by Sampson for the original Pay Hall frontage, whose columns also have smooth shafts, in contrast to Soane's fluted version.  I have been putting off the task of creating a lightweight version of this more curvaceous, "feminine" variant.  And before I am accused of sexism, let me clarify that this classification of the two designs into masculine and feminine derives from Soane himself, who felt that they were appropriate to different type of projects because of the feeling they conveyed. Anyway, I started dabbling with this over christmas and brought it to a conclusion this weekend.  Once again I have taken shortcuts.  You could say that this is "Fake News" to coin a phrase. The aim is not to achieve strict historical accuracy, a daunting challenge, but to capture the essential form while remaining as lightweight as possible.  To some extent, it's a question of fooling the eye: making you see what you expect to see.  Not that I'm ashamed of the result, far from it.  But it's based on a trial and error approach, what I sometimes call "freehand" modelling, "impressionistic" if you like. 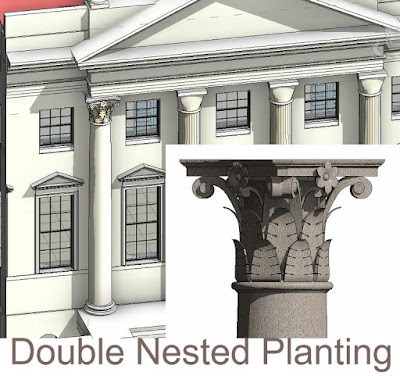 The end product, as it stands, is a double-nested planting family, which means that it scales according to a Height parameter.  Ultimately I will have 3 or 4 versions of this, all scalable, representing the masculine and feminine, smooth and fluted.  There is also scope for half columnes (engaged) and full (free standing) round, square, slender, robust.  Perhaps I will share a dozen or more of them at some future date, giving us all placeholders suitable for modelling almost any classical project. 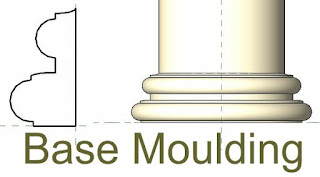 But I get ahead of myself. My "smooth female corinthian" is double-nested.  So there is a "container" of the Planting category, and inside that the "inner" version, also Planting, where all the actual modelling is done.  This "inner" family contains five nested components, one of them a profile.  This is the base moulding that I created long back for Soane's screen wall, based on photographs I took in 2015. 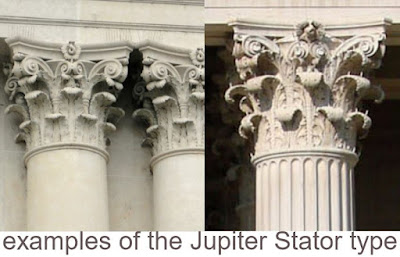 Next we have the flowers which sit high up in the centre of each side (4 in total then)  Here I reused the one from my male capital. It's just a revolve cut by a void extrusion.  Simple and lightweight, but quite effective.

Then there are two families to represent the upper and lower leaves.  This is where I started off over christmas.  It was just a doodle to fill a spare hour at first.  There is a solid extrusion sketched in the Left/Right plane, in the form of a shallow "S".  This is cut by a void extrusion in the Front/Back plane which cuts away the square edges. At first I had a simple continuous edge curve, but later I added a series of "inlets" so that the leaf has several lobes.  I quite like this, but it's not really capturing the nature of an Acanthus leaf yet.  There are corinthian capitals that use smooth leaves (as Paul's did) and there are various other simplifications and stylisations, but more often the leaves reflect the luxuriant curved veins of the Acanthus, flowing out and curving over. 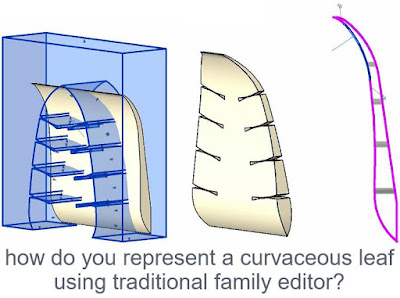 I'll have another go at that one day, but for now I have two families that capture the idea of a leaf reasonable well, arranged in an upper and lower array of 8 items each. It took a fair bit of trial and error to get the curves right, so the back leaf doesn't poke through the lower one and so that the curl over at the top is reasonably convincing.  You can't get the curve to go past the horizontal using this simple modelling approach.  But I'm happy.  It's an acceptable compromise, and surely BIM is all about finding the right balance along the "crude to complex" scale. 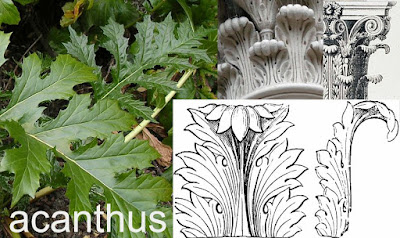 Finally there are the scrolls.  There are 4 of these, each of which has 4 extrusions, set at rather interesting angles.  This is all guessed.  I just kept nudging things around, scaling them, adjusting curves etc until it looked right in relation to the rest of the capital.  Actually there is a fifth extrusion: a cylinder passing through the two main scrolls to give the illusion that they are spiralling outwards at the centre of the coil. 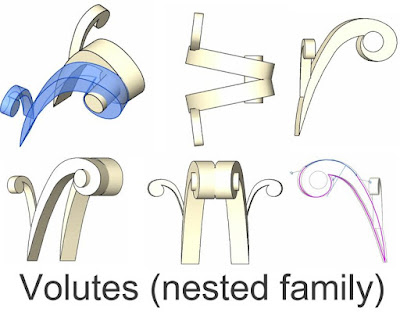 The heart of a Corinthian capital is a basket.  This is a revolve, no mystery there, just a bit of care to get the curves right. 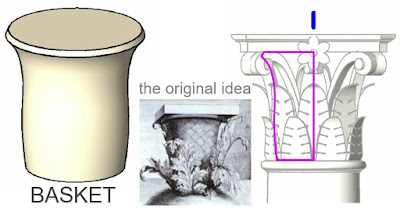 The shaft is a revolve of course.  The bottom third is straight, then I used a start-tangent arc to ensure a smooth transition into the entasis.  There is a short straight segment at the top behind the necking, which is a pick-edge sweep.  And final, at the top an extrusion with another "pick-edge" sweep. These last two sweeps use sketches rather than loaded profiles.  No particular reason, just easier to create in the first place, whereas I already had a family to hand for the base.

The inner family weighs in at slightly less than a megabyte, and the outer one, slightly more. To be honest I'm pretty chuffed with a scalable corinthian column that weights in at 1.2mb 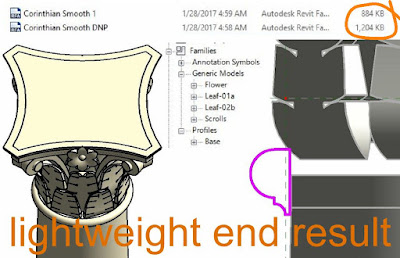 At present there is no Coarse-Medium-Fine differentiation in this family.  I will experiment with that at some point, but I'm in two minds about the value added.  It's bound to increase the basic file size, but will it supply a worthwhile performance boost in return?  Might be interesting to run some tests on a file with a couple of hundred instances.  Meanwhile I pushed Sampson's column back into the Pay Hall facade in Project Soane and ran a quick render. Oh and while I was at it, I created a smaller variant for Taylor's side entrance leading towards the Rotunda. 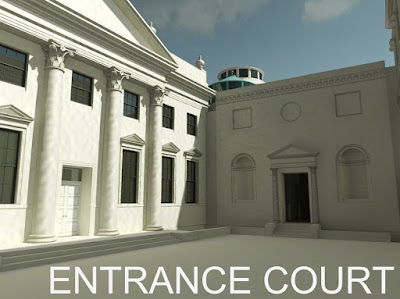 I've got quite a few different columns in my little collection now, including a Tuscan and a Roman Doric: some smooth, some fluted, some 3/4 columns like the Pay Hall ones, for attaching to walls. There's a nice watercolour from the time when guys like the young John Soane were touring Italy and measuring Greek & Roman ruins as an educational exercise, building up a storehouse of ideas that would inform their work for the next 50 years.  As you can see there's not much left of the Jupiter Stator capitals now.  I doubt they were quite as perfect in Soane's day as the watercolour makes out, but I guess they were much more complete than they are now. 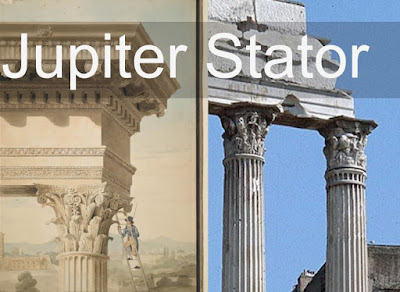 And to conclude, here is a reminder of how many more versions of the Corinthian capital it might be worth attempting.  Apart from the variations of LOD and technique, there are several other major interpretations out there in the source material.  It is indeed a very rich vein to mine ... whenever you have an hour or two to spare. 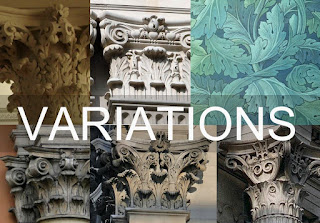 Email ThisBlogThis!Share to TwitterShare to FacebookShare to Pinterest
Labels: Classical Architecture
Newer Posts Older Posts Home
Subscribe to: Posts (Atom)
ABOUT THIS BLOG
All my life I've been fascinated by the way we build: the processes by which we design & construct our world.
The tools are many:
eye/ hand/ brain ... pencil & paper;
bricklayer's trowel ... laptop & Revit®.