How far should I take this?  How many churches to model?

In the last post on LinkedIn I suggested that making Revit families is a "design" process, meaning non-linear, cyclical, "you don't know how to even define the problem until you start trying to solve it"

So I am thinking in terms of multiple cycles, an iterative process. Round 1 was setting up a primitive “system” of nested families nested into a container.  Round 2 applied this system to a real-world example (Notre Dame) Now we are in Round 3, so what? Make a few more? How many? What type?

What is the landscape of possibility? 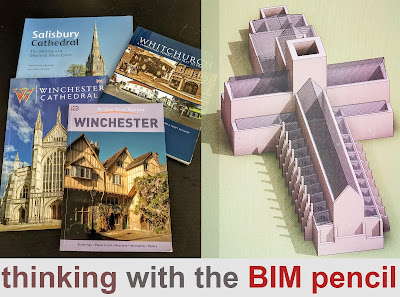 Winter Wonderland. I'm fascinated by the way words shift their meaning. Slippery as soap. For a couple of years now I've been using an Etymology app on my phone to explore derivations on the fly before those slippery words slither down my memory hole.

Winter is the "Wet" season. Wonderland is a place where girls called Alice believe 6 impossible things before breakfast. Wonder is definitely a slippery word. It can mean fantastic, or it can mean puzzling (I wonder what that's all about? ) 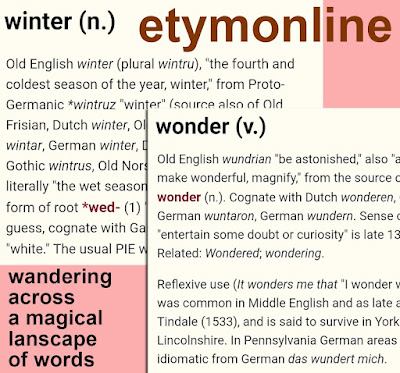 So perhaps Winter Wonderland can be translated as Liquid Puzzlement, skating across the landscape of ideas, “be like water"

In that spirit I am skiing through the mountains of potential that church builders have explored for hundreds of years.  I need to gather data.  That's one level of meaning (pattern finding) in this design process.  Reference images from my laptop, bookshelf, kindle, the internet.  Ever the collector, a hoarder and cataloger of little nuggets. 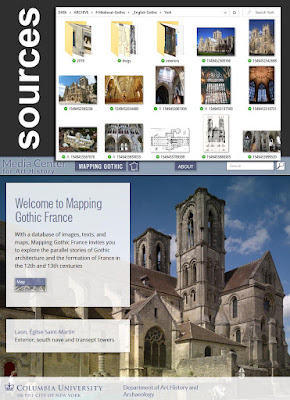 This game is a puzzle because we don't know what patterns will emerge in trying to distill the diversity of history into parametric massing models. Simplified and abstract.  I wonder where it all will lead.

I have a history of rummaging through this magical territory. Let's dig out the projects and families sprinkled across the tree-structure of my laptop. Products of a decade or more of curiosity by my BIM pencil as it wanders across the pages of history.  The BIM pencils wanders, and having wondered. moves on in endless cycles of structured exploration. 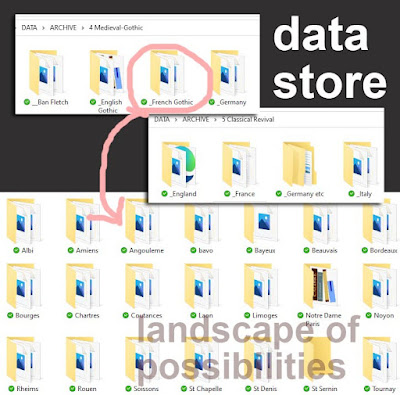 Fit these into a matrix with labelled rows and columns. Fish out some reference images to populate the empty cells. Let's see what other permutations and combinations are needed.

I'm anticipating a rewriting of the rules, several of them in fact. Pauses to reflect and reconsider.  Why am I doing this. Which fork in the road looks most enticing?  Am I even heading in the right direction?

But first lets work out where we are, survey the territory that we wandered through in order to arrive at this moment, noting also some interesting places that we bypassed along the way. 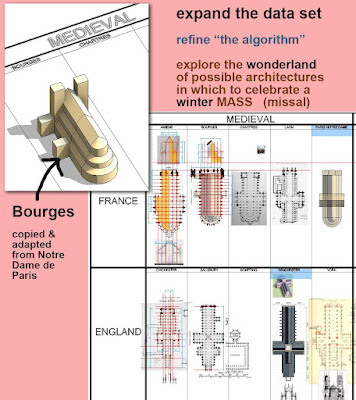 For the most part, this is how I spent my Boxing Day.  Gathering up the threads of my work on churches and weaving them into a cloth with "Warp & Weft" ... aka "Rows & Columns" , "Space & Time", Countries and Eras.

So far this Matrix begins at the Medieval Period, but perhaps I will extend backwards to incorporate the Greek Temple I built long ago, and maybe the Pantheon that was roughed out a couple of years later.  We don't want to lose ourselves in the vast empty spaces of history, but how can you have a Classical Revival without at least a not to the Classical Antiquity that inspired it? 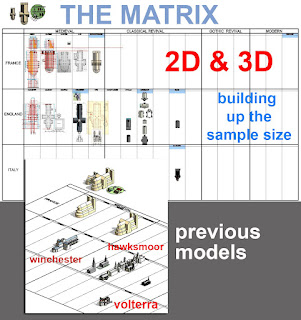 Posted by Andy Milburn at 7:39 AM No comments:

I created a component with independent parameters: Height, Length, Width, Roof Pitch.  Then I put “length” in the driving seat, with “Scale Factors” to control Width & Height. 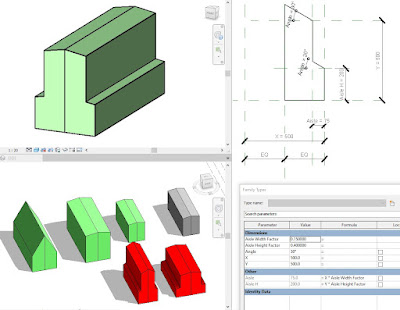 Big mistake. “Height” needs to be the Primary Input. As soon as I assemble 4 of my generic “Naves” into a cross this becomes obvious.  Keep the Height constant and vary the length.

So far, there are 3 versions: no aisles, single aisle, double aisle. That’s a step in the right direction, but let’s try to adapt it to a real-world case. 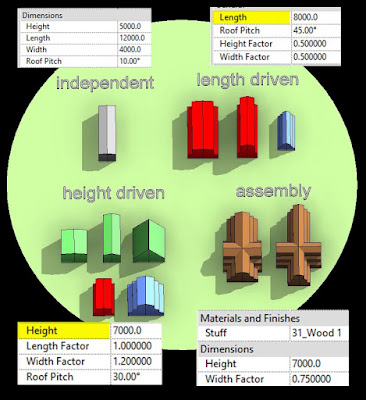 Notre Dame for example.  I’m using Two Aisles for the Nave and Chancel, One Aisle for the Transepts.  (ignoring the chapels for now, it’s just a proof of concept)

The west end is formed of 3 cuboids, and the Apse can be created from the Nave family by editing the path from a straight line to a very small semicircle.

In 2019 when Project Notre Dame was in full flow, I did a study for my talk at Autodesk University. This analysed the massing of Notre Dame: how it is built up as a series of bays, the underlying geometry, circulation routes. That helped me to consolidate what I had learned from the process of trying to model a medieval cathedral using Revit.

This new model is similarly abstract and simplified, but also different in its approach.  I am maintaining scalable behaviour, partly inspired by the Pumpkin explorations of 2011-2013, partly as a way of facilitating a large range of models of different historical buildings, partly as an aid to modelling at city scale in Revit, (perhaps.) 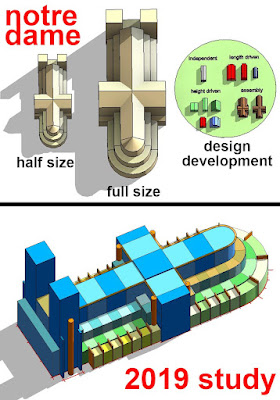 ·         Tackle each church as a fresh, unique case. In which case no need for parameters at all.

Is there a sweet spot, somewhere in between? Each new church could be derived from the closest previous example. Scale it up or down using the height parameter. Then open it in family editor and make a few enhancements. Maybe swap out components, adjust some of the profiles.  Could be a rapid way of developing a lot of church models for comparative analysis.

Nave, Chancel and Transepts just scale outwards from the crossing, which is at the origin of the host family.  So how to handle towers, apses etc. that attach themselves to the periphery?

My current method is to make up parameters on the fly, then define them as Height x “a number”

Let’s see how that pans out when we try to capture a few more examples. 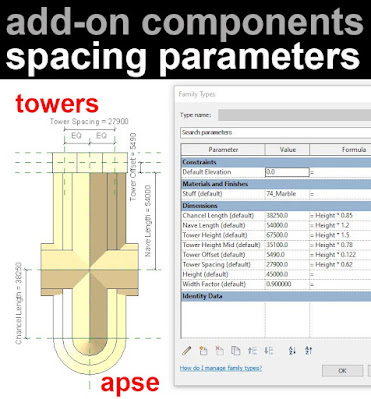 Posted by Andy Milburn at 2:56 PM No comments:

In case you didn’t get it, the title is inspired by “Dyslexia Rules KO”

Another way of putting it might be “In Praise of Spontaneity” but that doesn’t feel quite so fresh. Form and Content need to mesh, after all.

I remember early on in my Revit adventure (substitute any software tool that has become a mainstay of your existence) … early on I read advice from seasoned users telling me to PLAN CAREFULLY before starting to make a family.  I'm sure this works for some. 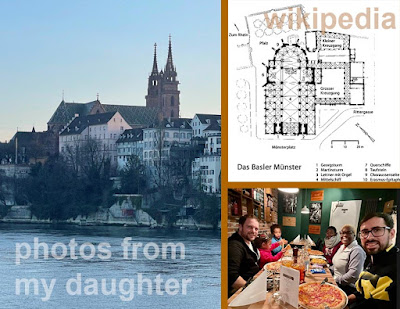 I lay in bed this morning planning out a family.  I’ve done it lots of times.  It rarely works.

My approach to most creative endeavours is to jump in, feet first, and flail around.  I’m an explorer, a seeker, a sketcher.  I’ve done my time at the drawing board, laying out sheets by hand, measuring carefully, constructing sheets for builders to follow on site, quantity surveyors to measure from.  I am more of a “Production Team” guy than a “Concept Architect” although I distrust that fragmentation of the design process.

But I have always treated BIM as a thinking aid, an extension of my brain.  Never “think first then act” always “learn by doing”. 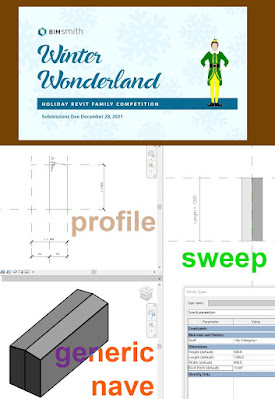 I’m making a Generic Church. I have a vague idea in my head, but the sleepy morning thoughts wandered around without coalescing.  So when I got to my laptop I just went “New Family” … chose the Default Generic Model family and followed my instincts.

It’s going to be “Modular”.  That’s a concept that has served me well for several years, starting with Classical Columns, proceeding via Doors and Windows, embracing all kinds of components and challenges that have fallen my way.

I’m starting with the Nave. The simplest form of church has to be an upside-down ship.  A generic nave, if I set the parameters up well, can adapt to form the chancel, or transepts. 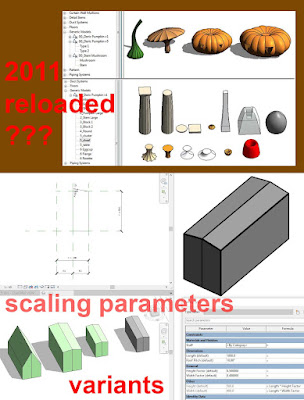 I’m going for a Sweep with a loaded Profile.  Adjust the length parameter and Swap out the profile.  That will take me a long way, even with just 3 or 4 different profiles to choose from.

Just to be clear.  This is my diary; it’s been neglected of late due to “Day Job” issues.  But I’m back and I want to inject more immediacy into my blogging.  Shorter posts, released the same day as the activities they reflect.  A worthy goal.

My daughter and her husband are visiting friends in Switzerland for Xmas.  She’s been sending pictures of church buildings.  Meanwhile my name popped up on a LinkedIn post by BIMsmith.  Memories of 2011-2014 and glorious adventures in the “many worlds” of parametric pumpkins.  And connections to my work on Hawksmoor churches in London which also goes back several years.

I want to do this “on the fly.”  Not sure where it’s going exactly.  More to come. 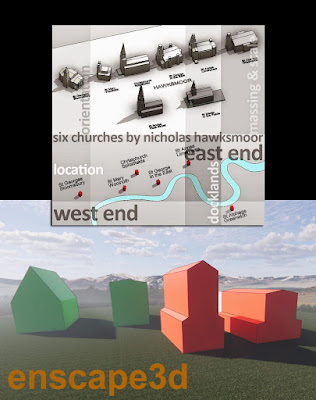