NO GOOD (CAN COME OF THIS)

I recently uploaded a couple of new songs to YouTube.

I think most of us, by now, have a bit of a love-hate relationship with digital media.  I abandoned Facebook and Twitter long ago for various reasons, but YouTube remains an important medium.  I have disabled the history and I don’t follow “suggestions”.  I just have a slowly growing list of channels that I check in on.  Mostly I like to listen to intelligent long-form discussions.  I guess I’m addicted to multi-tasking because most of the time this is a background activity while I’m beavering away in Revit.


That’s a song we used to do in the 70s when I had a pub band in Sheffield.  We were called
“Jump” which is the name of a mining village in South Yorkshire.  I use the past tense because coal mining is no longer a thing.  There was a bus called the “Jump Circular” that I used to see in Barnsley bus station as a teenager.  That was going to be the title of our first LP.  Those were the days of large circular vinyl “records”. 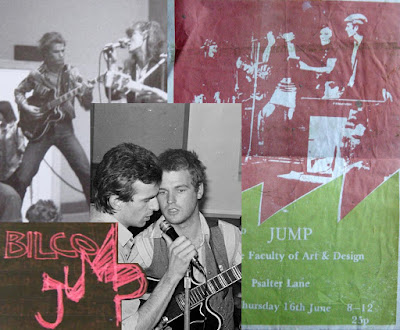 We played it quite differently in those days of course, closer to the “Swinging Blue Jeans” version.  And I used to use standard tuning on an electric guitar.  This impromptu version uses an acoustic sound and open G tuning. The rhythm is a bit more syncopated.  I’m a compulsive meddler when it comes to performing.  It’s interesting to watch footage of Chuck Berry on YooToob.  He was always messing with the timing, and the phrasing, and the keys, and the backup band, and Keith Richards 😊

Today I was listening to a discussion between Jordan Peterson and another psychologist.  Mention of Horus and the symbolic Eye, which is also Buddhist of course, in relation to “attention” as an aspect of human thought set me to doodling in a small notebook that I carry around. 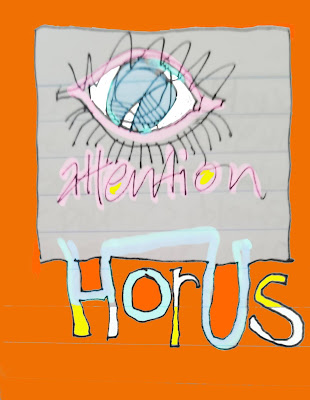 That’s a habit I had in my twenties and thirties that I have recently revived.  The era of digital devices means that I can “scan” that image with my phone and brink it into Autodesk Sketchbook for further enhancement.  I’m not suggesting that this has any deep meaning, but I do think that letting visual ideas bubble up from my subconscious on a daily basis is “good for my soul”  Contrary to the mischievous title of this post “Some Good Can Come of This.”

I uploaded an electric version of Little Red Rooster a few years ago.  This is a rather different take. Trying hard to let the remnants of my Yorkshire accent rise to the surface here and there.  Keeping my acoustic tuned to open G allows this kind of slide work to take place when the spirit moves me in that direction.

Father’s day is this weekend apparently.  Difficult for me to forget completely because I have a daughter.  Those of you with adult daughters will now that they tend to be good at sending out cards and such to remind you of the deep family bonds.  Signed on behalf of all 3 of my children and waiting for me on my desk when I went into the office yesterday. 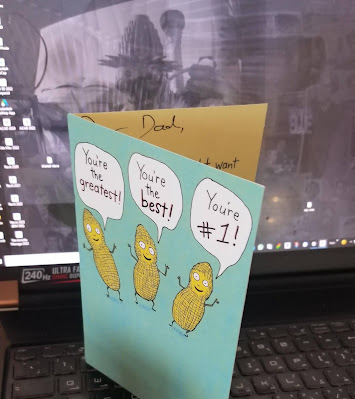 By the way the desktop background on my laptop is a compilation of photos from many phases of my life up to about 10 years ago when I last updated that image.  The one image that pops out is from my Parametric Pumpkin submission of 2012, a witch’s head assembled from vegetables, inspired by the painter Arcimboldo and based on the classic Walt Disney version of Snow White.

I will conclude by sharing a picture from 10 years ago when we all gathered in Cape Town for my 60th.  Joe had studied at UCT so that seemed like a good location for us to meet up.  The last time we had been there together as a family was 20 years prior when I spend a couple of years as a mature student in Joburg.  That was part of my transition from teaching in Zimbabwe, back to architecture which I had abandoned after my first degree in London.

This has ended up as a bit of a personal history post.  Sometimes good to look back and take stock of the journey.  I have certainly been blessed with an interesting path through life. 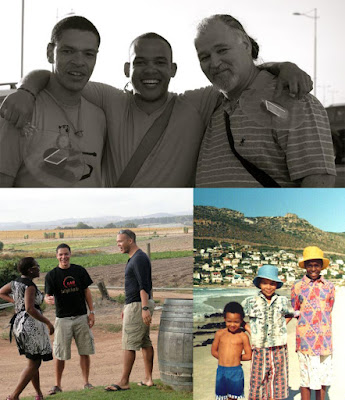 Posted by Andy Milburn at 7:21 PM No comments:

I’m using Lucerne as a case study for a multidimensional exploratory process. It started off as a painting, a therapeutic physical activity that took me back to my late teens.

The scene was selected from a day trip, 4 years ago. There is something magical about exploring an ancient city on a whim, with no clear plan of action, wandering through the streets and drinking in the atmosphere. My eyes are constantly scanning the buildings, asking myself questions, looking for new insights. 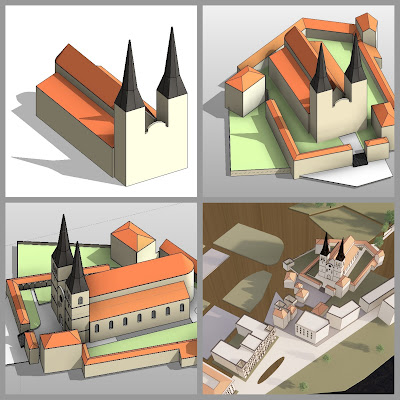 The central focus of the painting is a church. I decided to sketch this out in Revit. Switching to the digital realm takea my mind on new journeys. St Leodegar was a medieval monastery, so there were cloisters to rough out and sloping terrain to approximate. BIM sketching implies data and there are so many sources available now. Google earth, Wikipedia, image search terms. Very soon I am immersed in the William Tell myth and the emergence of the Swiss confederacy from Habsburg domination.

How not to get lost?  It’s a bit like the painting process. Trust your instincts, maintain a holistic view of the project. Let the main themes emerge in a natural way. 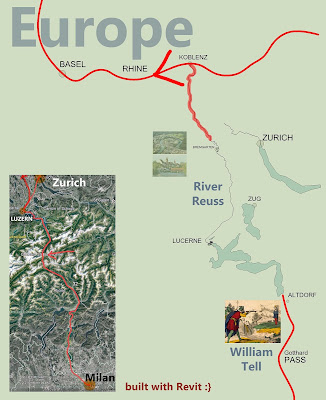 Lucerne lay on a crucial trade route. The St Gothard pass is the most direct route from Milan to Zurich. Mule trains from Northern Italy dropped down into the Reuss valley at Altdorf, where Tell reputedly shot the apple from his son’s head, where Landburgher Gesler held sway on behalf of the Habsburg dynasty.

From there, Lake Lucerne marks the beginning of a navigable waterway all the way down to the Rhine: Basel, Strassburg, Karlsruhe, Rotterdam. Revit may not be designed for cartography but I’ve had some good results before, extending outwards from a study of a single building of historical interest.  Mapping out terrain in simplified terms.  Extending well beyond the "20 mile limit." 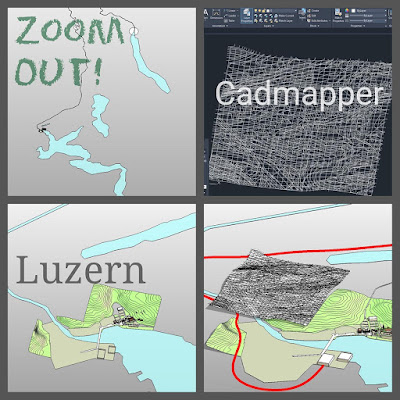 I’m grabbing 1km squares for free with Cadmapper. It’s a rough and ready approach, not being too picky about exact placements. Beyond the town centre, I default to “freehand” modelling the folds in the landscape based on rough heights from Google Earth. Merging pieces of topography together, using thick floor slabs to represent city blocks. 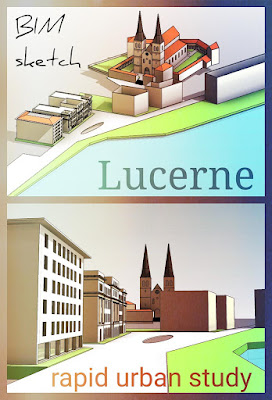 The river Reuss exits lake Lucerne and loops around some lumpy hills before doubling back and heading towards Zurich. The railway line runs parallel to the river. As we approached that morning, the river was on the right and on the left, a long body of water, the Rotsee, with the hills and mountains looming straight ahead.

I'm setting up a series of dependent views, zooming in progressively and exporting to Jpeg to insert in this post, placing images into blank spaces on my "map" ... not exactly the text-book approach to Revit but it's helping me to place my memories of that day trip into a broader context. 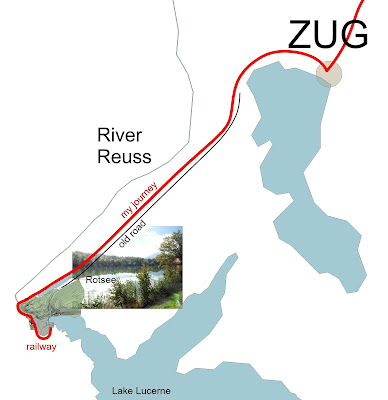 It seems to me that the old road North from Lucerne ran on the far side of the Rotsee and took a shortcut between the hills, arriving at the Lake in front St Leodegar. Old Maps show that the modern lakefront there is reclaimed land. The same is true of the station plaza which was my point of arrival. 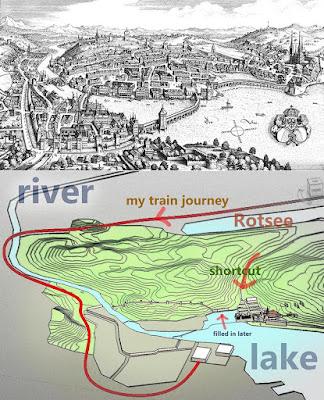 The grand, mostly classical buildings along that lake front presented an interesting challenge for my “BIM sketch” skills.  How rapidly could I catch the essential feeling of those structures?

Google Earth’s “3d buildings” feature has been very useful in this endeavour, but the activity of creating my own digital models is really crucial.  Learning by doing.  I’m really glad that I started off this sequence of activities with a painting, getting down and dirty with the brushes and the texture of paint. Moving forward using digital tools is yielding fascinating insights into history and geography. Some of my assumptions may well be false, but we learn by proposing ideas and chasing them down. If I find myself in the weeds I will backtrack and learn from the experience. 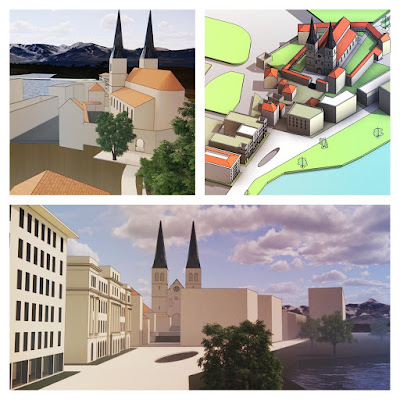 This post is a composite then of various techniques, ideas, disciplines.  The history of a city, the convenience of a mobile phone for “research on the fly”, the tactile qualities of acrylic paint.  The chuch of St Leodegar, like St Annes, Limehouse uses the composite order for the main piers that define the nave.  But, although both churches could be labelled “Baroque” they are very different.  The baroque here is an insertion into an older church and Hawksmoor’s style is quite far removed from the German type of Baroque.  Also these are pilasters, applied to a wall face defining a linear nave.  Hawksmoor unified nave and aisles in a single volume with four freestanding, circular columns of the composite order. 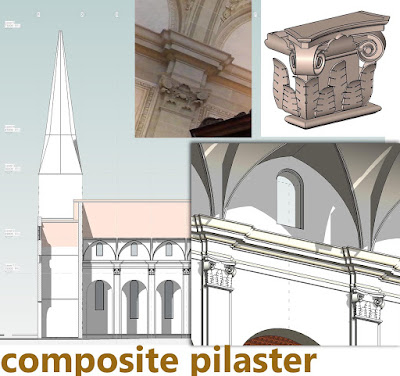 The capital itself follows similar principles: Ionic scrolls, much larger than the volutes found in Corinthian, but still with the two rows of acanthus leaves.  St Leodegar inserts a shell top centre, replacing the commonly used hibiscus flower.  It’s a difficult form to capture in Revit, and I have kept it very simple. Something to return to later perhaps.

Lots of stories here. The flow of trade from Northern Italy to medieval Europe. Lucerne as a fortified city profiting by protecting that trade route. The arrival of the railway and transition to tourist destination. Lucerne was a pioneer in this field apparently.

Humour me. The Himalayas formed when India crashed into Asia from below. Subduction, tectonic plates and all that good stuff. Kathmandu is a historic city that lies on a trade route through the Himalayas.

Italy was squeezed up into the European under belly as Africa drifted north. The alps resulted. I visited Kathmandu in 2007 and began some of my earliest BIM pencil studies on my return to Dubai. Ten years later, a day trip to Lucerne and now, in reflecting on that, I see connections and try to weave together stories using a blend of digital and manual tools.

These last images were drawn on my phone while lying in bed. Using screen grabs from Google Earth, shared to Sketchbook pro.  Add layers and sketch outlines with the S-pen, fill with the paint bucket.

Processes that I could not have imagined as a schoolboy immersed in the activity painting. 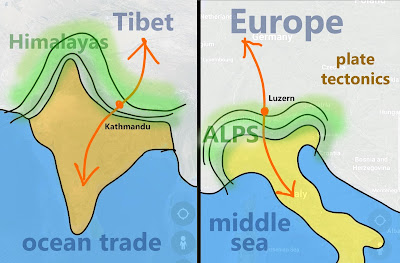