A SKETCH IN TIME

I distinctly remember, as a student (50 years ago  😕) thinking about the kind of living space I would create for myself. It was something like a shed, with spaces & tools for music, painting, model making, a drawing board, maybe bicycle repair.  Lock down has pushed my apartment somewhat in that direction.   It started with the home office, arranging all my digital devices.  I have my exercise bike and musical stuff arrayed around the bedroom.  Then, the week before last, I cobbled together my own little artist’s studio. 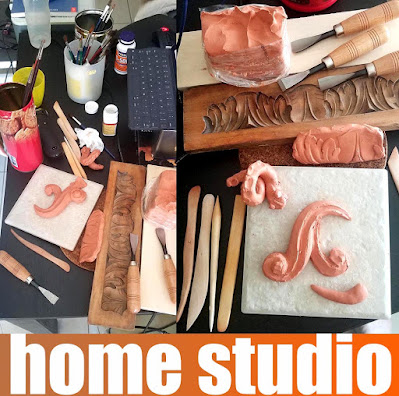 There are two parts to this post.  I bought some plasticine and modelling tools last year after returning from the UK where I met several skilled artisans: master plasterers, stone masons, sculptors.  Plasticine may seem a bit puny, but I just wanted to make a start at doing something a bit more physical … something that would act as a foil to the digital world that I have embraced.  I attempted a few bits and pieces soon after that, but never really got going.

So I decided to try again.  No clear idea of what I would do, except that it would reference classical ornament: the stylized foliage and scrolls that I have been exploring in the digital realm.  I took a porcelain tile sample as my base, rolled out some conical sausages and just started pressing them into shape. 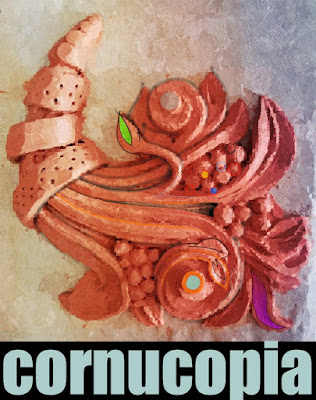 I have some boxwood spatulas and a few woodcarving gouges that I bought at the same time as the plasticine.  The chisels have never been sharpened.  Need to get a stone for that, but they cut plasticine well enough of course.  Just trying to learn some basic skills, and to develop a degree of fluency.  It’s easy to mess things up with such a sticky and malleable material that doesn’t harden, but you don’t want to get too bogged down.

After rapidly roughing out three tadpole-like squiggles, I took a break and scribbled over one of my phone pics.  That meant picking the image up from google photos, downloading to local on my ipad, and drawing on new layers using Autodesk Sketchbook Pro (excellent free software with versions for PC and android, so I have it on all my devices.)

I was just drawing shapes and trying to “think classical”, letting the subconscious do its thing. 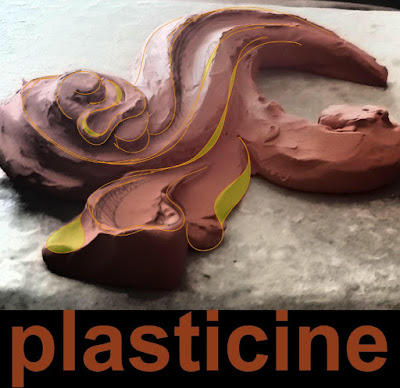 Then I returned to the physical model and carried on adding pieces of material in vaguely leaf-like forms.

Nothing is planned out.  I just kept looking at it and thinking “where can I add a bit next?”  It developed over a period of 3 or 4 days.  One thing about living on your own.  You can leave stuff lying around without sending someone else barmy.  For the first couple of days I was disappointed that it didn’t hang together very well.  Seemed to be a collection of unrelated bits and pieces.  But I kept at it and just let ideas well up from my subconscious.  “maybe I can add a leaf at a lower level here to balance things up …” 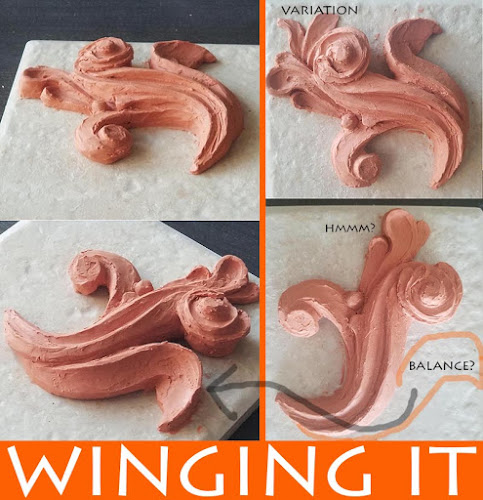 Eventually I got the idea of anchoring the composition by wrapping the “pointy end” in strapwork bands.  I wasn’t thinking about turning it into a Cornucopia, but I soon realized that’s what I had.  Horn of plenty.  It’s one of the standard devices in classical ornament.  That was the turning point.  I started to see how to make the shapes flow together a bit, enhancing the sense of unity and balance.

I was working with 3 main motifs: Scrolls, Leaves & fruit-clusters.  Maybe there are two types of leaf.  The aim I kept at the back of my mind was to distribute the 3 motifs to set up a kind of dynamic equilibrium. 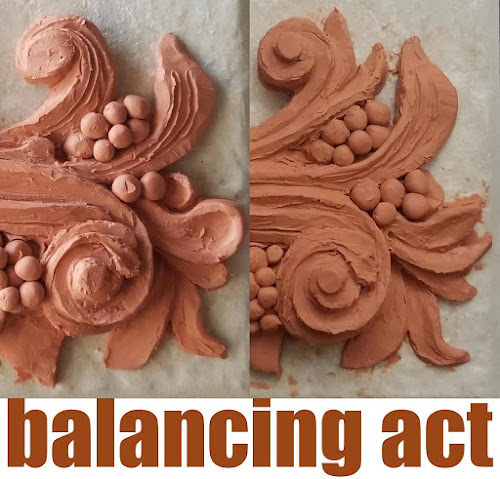 I’m not claiming that this plasticine doodle has any particular merit, but it’s a step forward for me.  I’m starting to think that physical modelling can be a useful complement to my digital work.

So let’s do a quick demo of how to bring this into the digital world.  I did a search and found a free photogrammetry app.  3DF Zephyr Free.  I downloaded and installed on my current laptop.  Taking about 20 photos with my Samsung Note 8 I was able to create a mesh of reasonable density.

Actually it’s too dense for my usual method for bringing a mesh into Revit, so … Take it into Max and decimate.  Get the polygon count down until it will export to DXF2014.  I think it’s something like 30k triangles.  I usually start around there and gradually reduce the count until it exports successfully.  Normally I would hide the edges of the mesh in Max, but this is just a proof-of-concept, so I skipped that part. 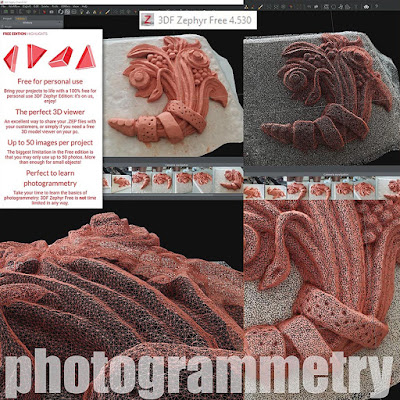 It came into Revit and I masked over the tile with a rectangular extrusion (native Revit)  Really I should have trimmed that part of the mesh away, but again I was impatient, plus I’m not very good at it.

Another reason for not investing more time in the mesh is that it’s a bit blobby.  I think it’s always going to be difficult to get crisp lines from a low-poly mesh sourced via reality capture.  Maybe if you model those shapes directly in Max you could optimize the polygons.  But my aim is to integrate physical and digital approaches to modelling. 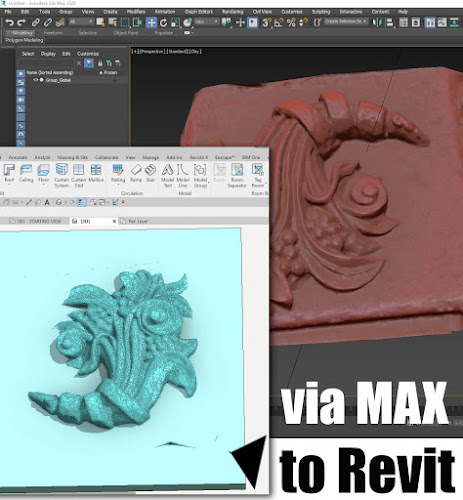 I started on the cornucopia under the inspiration of a successful foray into painting …. Physical 2D painting with watercolours, using a pad of thick cartridge that I found while clearing out my bookshelves.

Once again, I just jumped in and started making brush strokes with no pre-conceived image in my brain. Sky is blue, wet the paper first and use diluted colour on a big brush.  Let this wash fade out as you near the horizon and dryer paper.  The imagination starts to see clouds.  Squiggles of green below the horizon.  Start with a large brush and rapid flourishes. Be bold.  Follow up with irregular angled strokes in different shades of green. 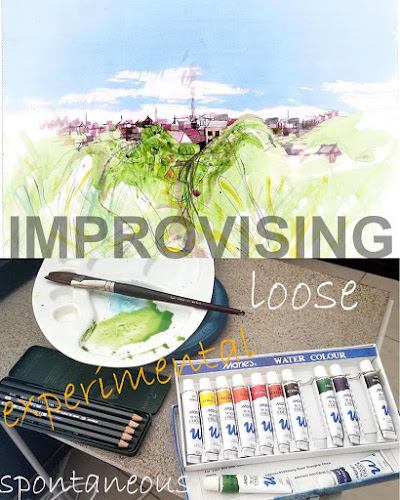 Then I found some charcoal pencils and got the idea of whiplash strokes to tie together the vegetation a bit.  Not sure what they represent, maybe they are just imagined patterns in the shadows.  What do I do with the horizon?  White gaps.  I use the pencil to imply a group of higgledy piggledy buildings.  Some reddish strokes for an urban feel from my childhood.  Brick-built , industrial towns. 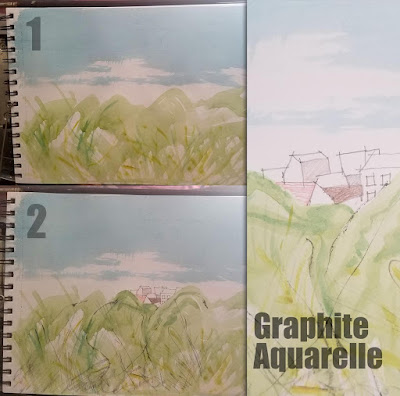 Then it’s mostly a question of upping the density. Add more detail in the centre to contrast with the bold strokes around the edges.  Try to keep things loose and free.  Jerk the pencil around to invoke foliage.  Apply a similar technique with the small brush for smokestack chimneys.

Had to get a Grecian temple front in there somewhere 😊

So the painting was quite short and sweet, and inspired me to do some modelling.  Hence the cornucopia sculpture. This took a bit longer, with effort spread over 3 or 4 days.  Taken together these two experiments formed a very satisfying departure from my usual routine. 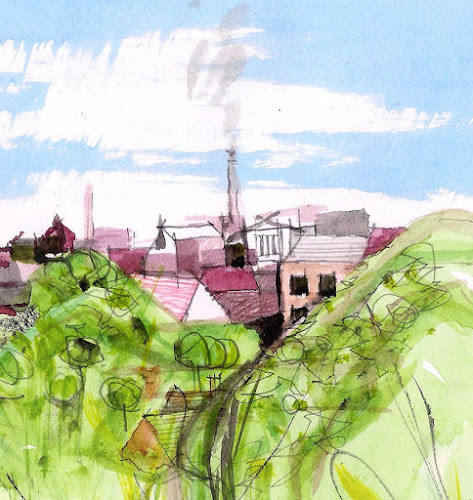 Email ThisBlogThis!Share to TwitterShare to FacebookShare to Pinterest
Labels: Classical Architecture, Drawing, Reality Capture
Newer Posts Older Posts Home
Subscribe to: Posts (Atom)
ABOUT THIS BLOG
All my life I've been fascinated by the way we build: the processes by which we design & construct our world.
The tools are many:
eye/ hand/ brain ... pencil & paper;
bricklayer's trowel ... laptop & Revit®.