Time for another progress report on Project Soane.

I've been trying to flesh out the neglected regions, the blank, undeveloped rooms and spaces that still exist in the model.  Two months ago I decided to tackle the Reduced Annuities Office. This is part of an L shaped wing, built by Taylor towards the end of his life. 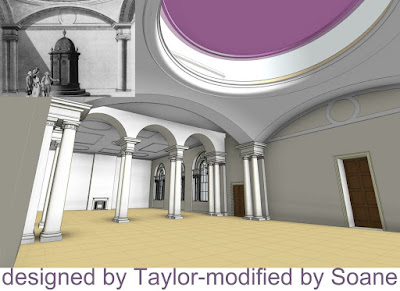 There were two rooms: a square one in the corner, lit from above by a large circular lantern, and a rectangular one forming the western boundary of Garden Court and lit by three large Palladian windows, overlooking the court. 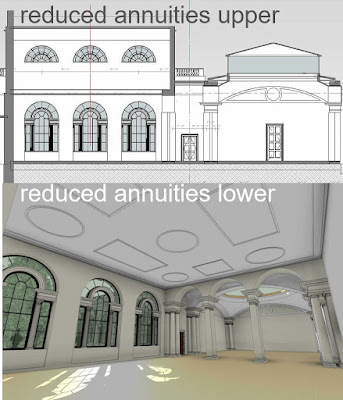 Soane built an upper room above this second space, as shown in a previous post. https://grevity.blogspot.com/2018/10/going-up.html    At the same time he connected the two lower rooms, replacing the dividing wall with a triple archway which maintains its structural function, supporting the wall above.  There are perspective sketches of this feature, made by Soane's pupils during construction.  I found it difficult to reconcile all the heights, but made significant progress.  It's starting to look like a real space. 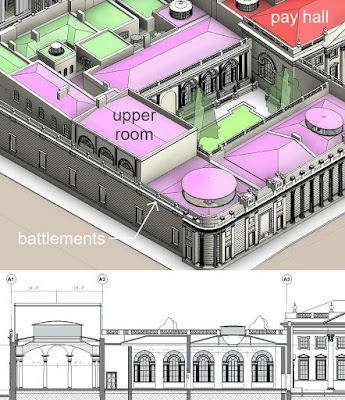 A number of anomalies remain to be resolved.  The long side walls of the upper room are set back from the parapets of the walls below.  Just how was this achieved, structurally? I would like to think that the walkway around the battlements overlooking Princes Street was maintained along this section.  But how would you achieve sufficient width?  The thickness of the screen wall itself doesn't seem to be enough. 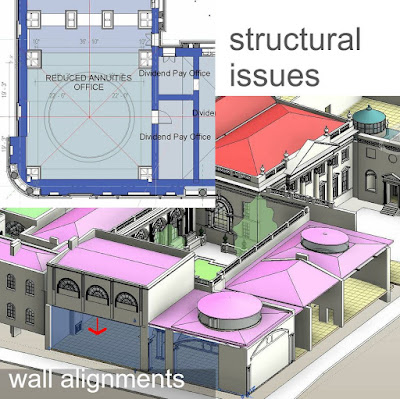 These are questions for the future.   Meanwhile I started to look at the first floor rooms above the Old Barracks Block. This was one of the first structures built by Soane and was unusual in having an upper storey.  I think this was originally the location of the printing works where bank notes were produced. Much later, when Waiting Room Court was built it became part of "T" shaped suite of rooms.  Soane didn't leave us any floor plans for these upper levels, so how were they accessed?  There is a staircase close to the corner of Garden Court, which presumably also gave access to the room above the Reduced Annuities office.  But there are lots of problems as I discovered when I tried to model it. 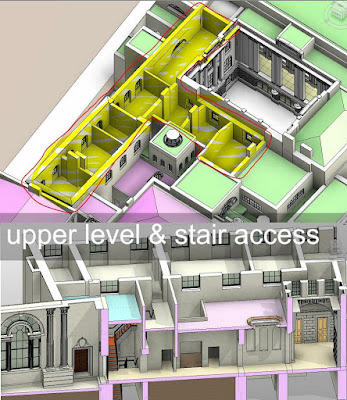 I have to believe that the stair was set back from the parapet around Garden Court so as not to disturb its continuity.  I came up with a somewhat implausible arrangement where the stairs wind around and finally reach the upper room via a couple of short flights and a section of open flat roof.  I couldn't see a better way to connect the various levels and half-levels together.  The grand spaces around Garden Court have rather high ceilings compared to the much humbler rooms of the Old Barracks block, which was tucked away in a rear yard.  Once again I have opted for putting a solution in place and continuing to reflect, gather information, keep an open mind. 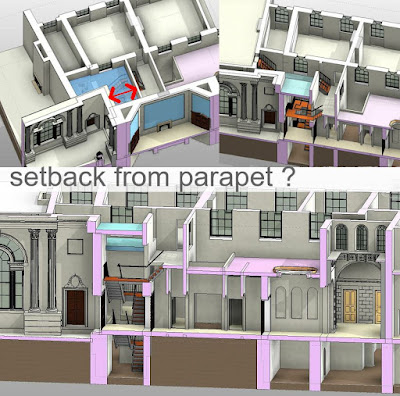 The Old Barracks was the next item on Taylor's list when he died.  It's not clear whether Soane designed it from scratch or modified a plan left by Taylor, but there are a couple of elevations in the Soane archive.  I used these to inform my work.  There is a symbolic "cannon ball" feature still to add and the cornice is not quite right.  It's interesting that he took such care over an elevation that faces into what is essentially a narrow light well, possibly containing privies for lower level staff. 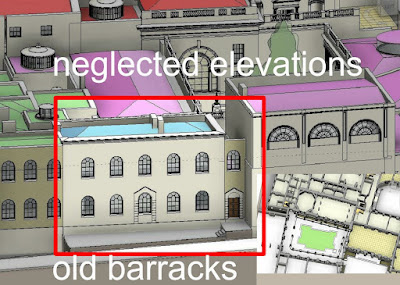 The levels shown in this yard are speculative, and moving north we come to the complexities of the corridors and stairs on either side of the Doric Vestibule.  It's typical Soane, with lots of stepped levels allowing for side light to enter the building in unexpected ways.  As usual the various drawings in the archive don't quite match up. 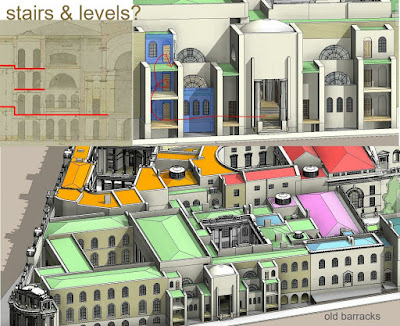 I made a lot of progress.  All these areas were developed in an ad-hoc manner.  Walls have been split and adjusted in height repeatedly.  I'm using face-brick for these "back-of-house" zones, partly based on drawings, partly because that's what he usually did.  Some of the walls need to be split to allow for narrower parapets above roof level.  It's nice to be getting to that level of detail, and to see these marginal zones starting to hang together as believable parts of a Soane building. 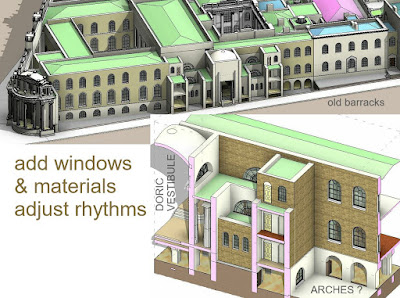 Coming to the Doric Vestibule, I started to adjust the walls and vaults below the half-level of the entrance lobby.  Grids were not showing up in some of the working sections, a sure sign that the section plane is slightly skew.  This whole area is set at 5 degrees to Project North and it's very easy for inaccuracies to creep in.  I set up a view and used colour over-rides to turn sections green once I had verified that they were aligned correctly.  It's such a complex structure, you really need dozens of sections to pick up all the subtleties.  Quite a lot of time went into regularising angles and dimensions.  Tedious, but it will pay off down the road. 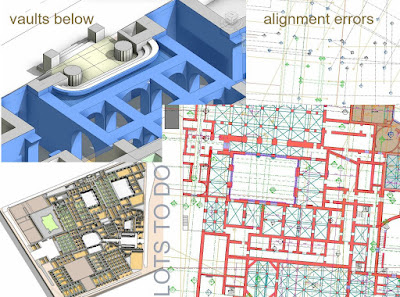 A good long session developing the cellars was long overdue.  I have a couple of parametric families for the vaults and arches which were enhanced to include a "flatness" parameter that maintains a proportional "rise" value as you vary the span.  It's becoming clear that there is a progression from some of Taylor's work which was built without cellars, through the majority of the site which has grid of walls supporting brick groin vaults, and ending at the lower end along Lothbury where the basement is effectively at ground level.  It seems that there are no vaults here, but rather timber floors like those on the upper levels. 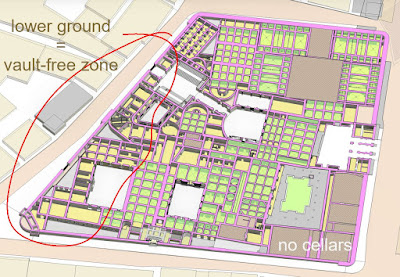 Let's conclude with a couple of Enscape images of that RAL space.  Enscape is great for giving a sense of the quality of light in this space.  When you look back from the side-light space, the portion below Taylor's lantern really glows with an ethereal light.  But when looking back the other way, the effect is somewhat different.  Is there something about the way that Soane's treatment of daylighting animates the process of moving through a sequence of spaces? 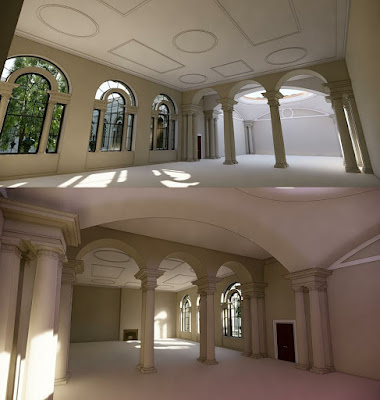 The final collage deals with the three windows.  Actually the bank had Soane erect a partition, dividing two of these windows off into a separate room, but I couldn't bring myself to do this.  What was it like to be a clerk in one of these offices, I wonder?  To be a cog in the wheels of finance at the moment when the Industrial Revolution is unfolding.  When the longstanding tussle between England & France is about to tip in England's direction, partly because of the financial stability underpinned by the very institution you are working in.  Difficult to grasp that the work of filling out ledgers by hand, was the equivalent of today's cutting edge cloud database.  The accuracy of the Bank of England's record keeping was legendary.  Would you feel a sense of wonder at the pace of change, knowing that the trees outside had only recently belonged to a churchyard established in medieval times? 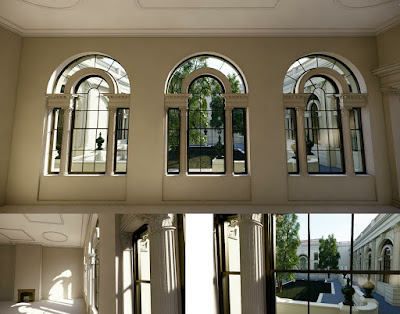