Just in case you think I spend all day preparing posts on St Mary Axe, I'm going to share a few snapshots from my "day job".  These are all from projects I've been assisting with Revit support over the past few weeks..

First some walls & railings based on a well known islamic pattern.  Just quick design-development images knocked up in a couple of hours or so.

Second one is a very nice project that I hope will go ahead soon.  These images were created from a quick model I made for some training sessions.  It's a very steep site overlooking the sea.

Third project is apartments in a more urban setting.  I had fun here using a kind of lego-blocks approach to quickly compare different massing options and then adding a bit of facade detail to generate visuals.  An interesting exercise in early concept design work.  I will explain this a bit better when I get time.

The fourth project was a quick masterplanning exercise. Again it was a chance to explore new ways of using Revit at concept stage and some useful lessons learnt.  Simple massing model of  a housing unit.  Schedules that count them up as you go.  Linear & Radial arrays to space them out quickly along the streetscape. 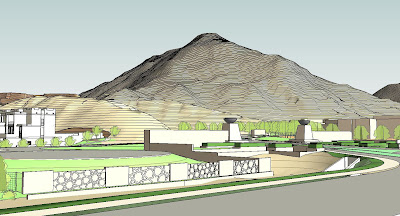 Another image of the islamic pattern wall placed in context.  This is ongoing development of a project that I've been working on for just over a year now.

Finally another shot of the hillside resort.  Some early attempts to study the way that the room blocks and interlinking pathways interact with the hillside.  I've enjoyed focussing my attention on how to model in a schematic, semi-abstract way so that the design remains flexible and options can be explored rapidly.

Email ThisBlogThis!Share to TwitterShare to FacebookShare to Pinterest
Labels: GAJ, Stairs and Railings