This post has been on hold for a month while I played with vegetables.  Due warning.  I'm about to get pedantic again.  It was inspired by Paul Aubin's recent post displaying his considerable modelling skills in the form of a parametric corinthian capital.

Let me start by saying "great work Paul" and "I am truly gobsmacked".  But ... what a can of worms it opens up.  So I am going to head off at a tangent.  Here are a few snapshots from my album, mostly London, but various other towns & cities on both sides of the Atlantic feature.

The most obvious point to make is that there is a great deal of scope for variation at every level : scale, proportion, complexity, mood.  The buildings in question range from terraced housing to law courts, neo-classical to English free-style, stone to terracota.

And by the way I didn't select for variation here.  I just dropped them in as they came, ordered by file name.    How can we possibly standardise and parameterise all that variety ?  And even if we could, where would that get us ?

The spirit of the corinthian seems to live in it's infinite ability to be constantly re-invented.  How do you factor that into an equation ?  I'm not trying to be negative here.  I love what Paul has set out to do.  It's just that it opens up so many questions which I think go way beyond the issue of how to model the classical orders.  How does the promise of BIM progress beyond the banality of ROI into the kind of freedom of expression that these capitals express ?

Generally speaking these examples range from 100 to 200 years old.  Some pre-date blueprint technology, all came before Diazo printing with its ammonia stench.  How could such a diverse human cast (world famous architect to jobbing builder) create such a rich set of variations so effortlessly ?  And how could a Revit family that resizes itself on cue to a few typed numbers hope to join such a tradition ?

It's not a put-down.  I'm asking serious questions.  David Light commented recently that BIM is just beginning.  Absolutely.  And as a community we have a lot of open-ended challenges to address.  We are very good at telling the unbelievers to open up their minds to the future.  Personally I sometimes feel quite blinkered and hemmed in myself.  What happened to the freedom I used to feel with pencil & paper ?  Why do I spend my day tussling with reference planes & shared parameters ?

The "cartoons" are from a project I did 20 years ago when I went back to university at the age of 40.  I was tussling with the question of meaning & architecture.  How does BIM help us to make our work mean something, to express something of lasting value in a world of instant gratification ?  It's an open question. 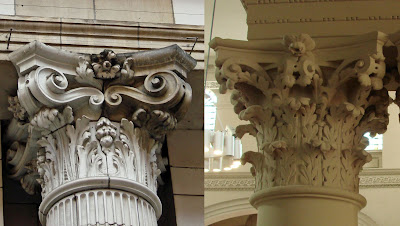 Taking a closer look at capital(ism).  Here are 2 from Bloomsbury.  One a splendid example of faience ... cutting edge technology in it's day.  Fired clay from standard moulds ... see how they slot together. Stylisation & modularity.  The other is Nicholas Hawksmoor, a church interior.  Not sure of the technology here, fibrous plaster perhaps ?  See how the acanthus leaves creep up so flat against the cylindrical shaft only to curl free at the last minute.

Consider the next pair.  One from New York, the other ... Sheffield Town Hall a favourite building from my teenage years.  Both carved from real stone, and both hinting at a mediavelised classicism.  One slender and sinuous, the other squat & static.  Look carefully at the 2 capitals from Sheffield, identical at first glance but betraying their hand-carved individuality when you look a little closer.

Imagine 4 scenarios.  Firstly a genuine attempt at classicism, a bank perhaps.  You need 3 different sizes of corinthian column.  How are you going to tackle this in BIM ?  Secondly an act of historic restoration.  You need to replicate existing capitals as accurately as possible.  Thirdly a slightly tongue-in-cheek reference, a re-interpretation of the corinthian that takes considerable liberties.  Number 4 is speculative housing with corinthian porticos, built to a budget.

In scenario one, I would be looking to  use a simplified capital in my family: probably a simple blend with some added drafting for elevation views.  The scaling might not be fully parametric.  I might do the drafting as a cad import, open it up in family editor and resize manually.  A bit of a hack perhaps, but could be the most effective solution in this case.

This would handle design development and general layout drawings.  What about the typical details ?  I think we need a specialist.  This is a prestige job and I want a cast-stone supplier who has serious craftsmen on his team who can make mock-ups for us that bring the corinthian to life.  So at tender stage I am going to embed into my BIM package a couple of reference photographs, a hand drawn sketch and a design/build spec.  This will give bidders a basis for pricing, knowing that they will have to submit mock-ups for approval, and to allow for an iterative design process using an approved specialist. 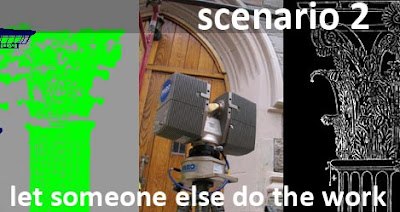 In scenario two, I could take rubber moulds.  That wouldn't help with my Revit model.  Maybe these days we would do a laser scanned point cloud.  That could take us to 3d printing, some touch-ups by skilled artisans and mould casting.  It could also generate 3d files to embed in my Revit tamily.  I could have 3 levels of detail, one of which would be the blend plus detail lines outlined in scenario one.  The point cloud version would rarely get swapped in, but could generate some really nice renderings for the client's fund-raising efforts.

Scenario three got me going a bit.  You will notice a couple of things about my reference photos that Paul may be aware of, but hasn't yet reflected in his work.  The scrolls at the corners are almost always made from two separate pieces that converge and merge just at the corner, where they often project beyond the moulding above. 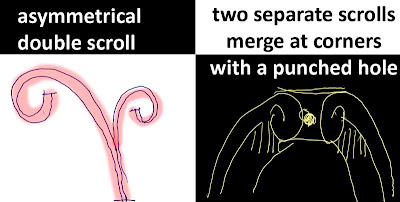 Each of these two pieces is normally an asymmetrical double scroll.  That is: the main scroll that meets it's twin on the corner has a secondary scroll branching off its back and heading back towards the middle.  Finally, note the punched hole where two scrolls meet on the corner. 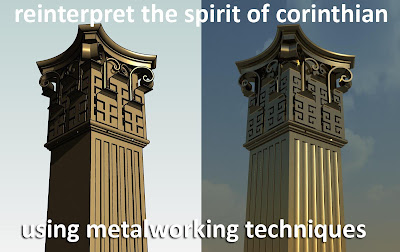 I chose to re-think the corinthian as a piece of architectural metalwork.  Scrolls made from flat bar, and leaves cut and bent from flat sheet.  Not sure how the top moulding is made.  Probably also starts as sheet, heated and passed through rollers.  Would need to be mitred and welded/brazed at the corners, then carefully ground and polished, probably by hand. 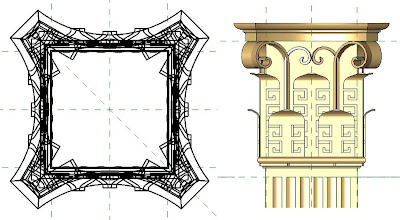 I didn't make this parametric.  I was using Revit in the same way many use Sketchup, as a quick way to get a design idea down "on paper.  I didn't use Sketchup because in my view Revit is better, even for playing around with early design ideas.  It just takes a little longer to become fluent, but after that there's no contest. 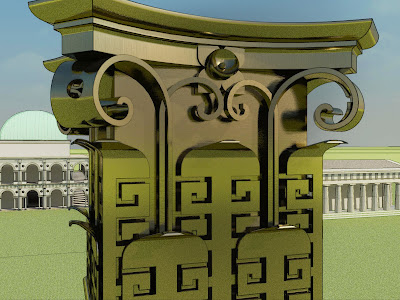 Scenario 4 is almost certainly a matter of selecting an existing pre-cast concrete / GRC / GRP product.  If I am lucky the supplier can give me am RFA file.  Failing that I revert to the blend plus detail component approach.  They can probably supply a cad elevation.  Maybe I will give the family back to them so the next architect will have an easier time.  No need to draw this up at half size.  Just put the product details in the spec with contact details and maybe a photo.

So thanks to Paul for getting me juiced up.  Hope you don't mind me taking the conversation in a different direction.  And I hope this helps some of you to think harder about the great variety of approaches that are possible when creating families for real-life situations.

More to follow shortly because I went on to apply my scenario 1 approach to the Pantheon in Rome & then had a go at the scalable capital challenge that Paul was exploring.